Subtropical Storm Alberto heads to the US Gulf

MIAMI (AP) – A storm moving slowly through the Gulf of Mexico is threatening to bring heavy rainfall, storm surges, high winds, and flash floods to the U.S. Gulf Coast this holiday weekend.

Cuba maintained its tropical storm watch for the province of Pinar del Rio, while Mexico cancelled its watch for the resort-dotted coast of the Yucatan peninsula, where the storm brought heavy rain. There were no immediate reports of emergencies. In Cancun, local newspapers showed scenes of some streets flooded to mid-hubcap level.

Empty beaches and low-hanging clouds are shown, Friday, May 25, 2018, at Fort Lauderdale Beach in Fort Lauderdale, Fla. A storm kicking up in the Caribbean Sea is threatening to bring heavy rainfall and flash floods to parts of Mexico, Cuba, Florida and the eastern U.S. Gulf Coast this weekend and possibly beyond. (AP Photo/Wilfredo Lee)

In the U.S., a storm surge watch – meaning the possibility of life-threatening inundations from rising coastal waters moving inland – was issued for a stretch of coastline between Horseshoe Beach, Florida, and the mouth of the Mississippi River.

“The combination of storm surge and the tide will cause normally dry areas near the coast to be flooded by rising waters moving inland from the shoreline,” the National Hurricane Center in Miami said. Isolated tornadoes could erupt over the Florida Keys or southwestern Florida late Saturday.

Forecasters at the National Weather Service warned residents along coastal Alabama and Mississippi as well as the Florida Panhandle to brace for heavy rain and high winds. Isolated tornadoes were also possible. The NWS said a flash flood watch would be in effect from Saturday evening through Tuesday evening for southeastern Mississippi, much of southern Alabama, and the western Florida Panhandle.

“This system will bring excessive rainfall to the watch area beginning Saturday evening and continuing through Tuesday evening. Rainfall amounts of 5 to 8 inches, and possibly locally up to double these amounts are possible in this area with this event,” the NWS said.

At 8 a.m. EDT, the National Hurricane Center in Miami said Alberto was centered about 70 miles (115 kilometers) south of the western tip of Cuba and moving north at 9 mph (15 kph). Its top sustained winds were 40 mph (65 kph). A gradual strengthening was expected as the storm moves north.

A subtropical storm has a less defined and cooler center than a tropical storm, and its strongest winds are found farther from its center. Subtropical storms can develop into tropical storms, which in turn can strengthen into hurricanes. Alberto comes ahead of schedule: the six-month hurricane season doesn’t begin until June 1.

Parts of Florida, Georgia, Alabama, Mississippi and Louisiana have already seen heavy rain this week, and further deluges could leave those areas vulnerable to flash flooding and river flooding. Some beachfront and riverfront communities are already handing out sandbags.

The downpours could dampen Memorial Day, the unofficial start of the summer tourist season along Gulf beaches. Along with heavy rains and high winds come rough seas and a threat of rip currents from Florida to Louisiana that can sweep swimmers out to sea. 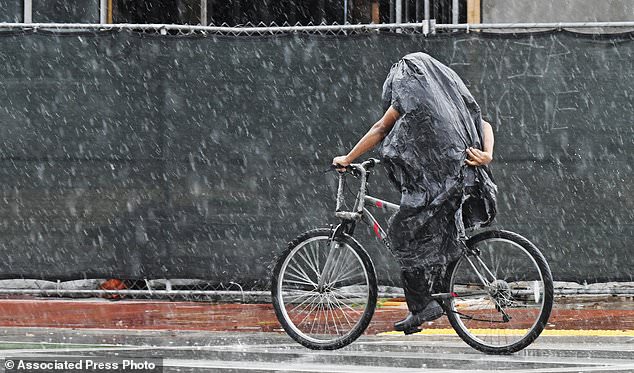 A cyclist tries to stay dry along Collins Ave. in Miami Beach, Fla., Friday, May 25, 2018. Rain from Subtropical Storm Alberto is expected to will drench the Memorial Day weekend. (Jim Rassol /South Florida Sun-Sentinel via AP) 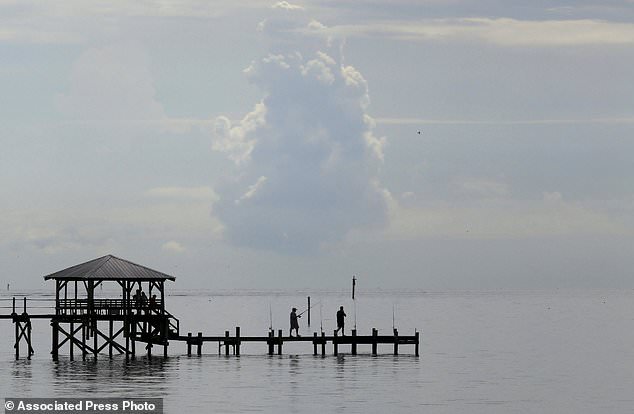 A pair of fishermen walk out on a pier in Pass Christian, Miss., on Friday May 24, 2018. Heavy rains are expected over the Memorial Day weekend in south Mississippi. (John Fitzhugh/The Sun Herald via AP) 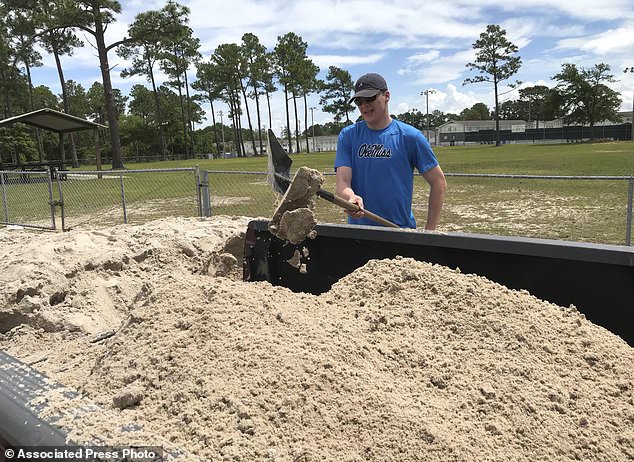 Nicholas Filipich of Biloxi, Miss., shovels sand for sand bags into his grandfather’s truck on Friday May 24, 2018. Filipich was helping his grandfather prepare for expected heavy rains over the weekend. (John Fitzhugh/The Sun Herald via AP) 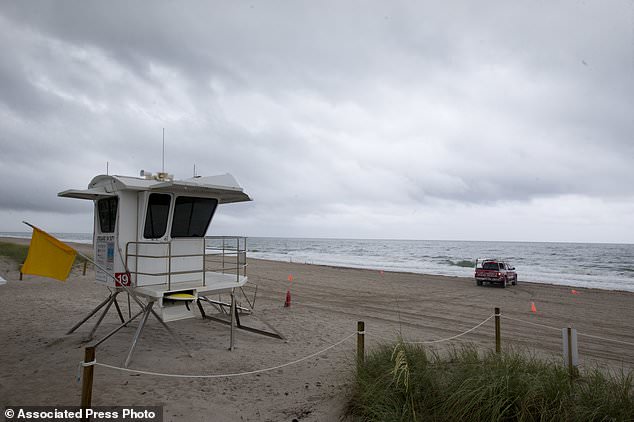 Empty beaches and low-hanging clouds are shown, Friday, May 25, 2018, at Fort Lauderdale Beach in Fort Lauderdale, Fla. A storm kicking up in the Caribbean Sea is threatening to bring heavy rainfall and flash floods to parts of Mexico, Cuba, Florida and the eastern U.S. Gulf Coast this weekend and possibly beyond. (AP Photo/Wilfredo Lee)