‘It’s absolutely wonderful to leave it with Clare’: Sue Barker appears to confirm that Balding will step into her shoes at Wimbledon

Sue Barker has dropped a major hint that Clare Balding will step into her shoes as lead BBC presenter at Wimbledon next summer.

Barker, the recently retired star of the BBC’s coverage, suggested that Balding would be taking over when they featured together at the BT Sport Action Woman Awards on Wednesday evening.

Receiving a lifetime achievement gong from her potential successor, an emotional Barker spoke of her love for Wimbledon and working there, adding: ‘I’ve loved it all my life, but I know I’m leaving it in the safest hands – it’s absolutely wonderful to leave it with Clare.’

Balding looked somewhat blindsided by the endorsement, although it would hardly be a surprise if she was elevated to Barker’s position, having presented the Today At Wimbledon highlights package for the past seven years.

A spokesperson for the BBC declined to comment, although it is known that they have yet to assemble their team for next year’s Championships.

Given the hand-in-glove relationship between the tournament and the national broadcaster – which pays around £65 million annually for the rights – it is also unthinkable that Wimbledon will not be closely involved with the appointment.

There is also likely to be a prominent role for Isa Guha, despite her being better known for cricket rather than tennis.

Barker will be a tough act to follow, having become something of a national treasure after 22 years in the lead role at the country’s flagship event.

She received an avalanche of tributes upon leaving this summer, and said at the BT awards: ‘I think that was the most emotional thing that ever happened in my career. It’s something that I will absolutely treasure forever.’

Meanwhile, Wimbledon has confirmed that it will free female competitors from the obligation to wear white underwear at next Summer’s Championships.

As Sportsmail revealed last week, the All England Club has finally fallen in line with other women’s sports in allowing coloured undershorts to take account of players’ menstrual cycles.

The move was formally unveiled alongside other announcements, which included the second biggest annual surplus to be handed out to British tennis this year, of £42.4 million. 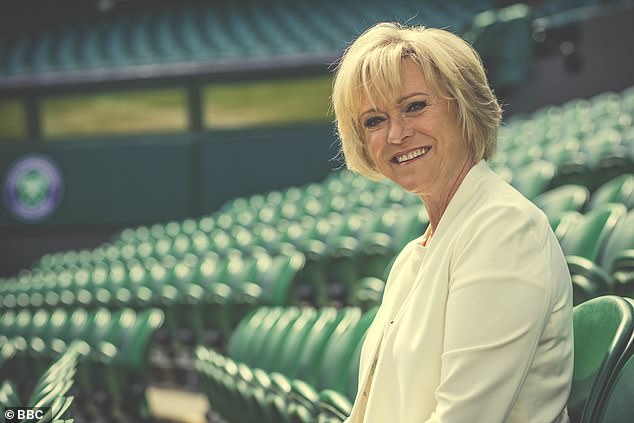 The all-white rule has been the source of continual irritation to both male and female players over the years, but it will otherwise remain in place, in line with tradition.

Wimbledon Chief Executive Sally Bolton said: ‘We are committed to supporting the players and listening to their feedback as to how they can perform at their best.

‘ I’m pleased to confirm that, following consultation with players and representatives of several stakeholder groups, the Committee of Management has taken the decision to update the white clothing rule at Wimbledon.

‘This means that from next year, women and girls competing at The Championships will have the option of wearing coloured undershorts if they choose. It is our hope that this rule adjustment will help players focus purely on their performance by relieving a potential source of anxiety.’

Wimbledon enjoyed a significant Covid bounceback this summer, with a total surplus of £47.1 million, 90% of which will go to the Lawn Tennis Association. Nearly half of that will be swallowed straight up by the LTA’s colossal salary bill.

There is also little sign of the recession when it comes to tickets to next year’s tournament.

With the annual ticket ballot having closed this week, it was revealed that more applications have been received than ever before, including a revived appetite from overseas.

The status of Wimbledon is still uncertain when it comes to the allocation of ranking points for next year. The event was stripped of them after SW19 went against the rest of the tennis tour by banning players from Russia and Belarus.

There now seems to be a tacit admission that a factor involved was a lack of connection with the wider game and player organisations, as was pointed out at the time.

An attempt to rectify that is the appointment of former Davis Cup player Jamie Delgado and ex junior champion Laura Robson to new part-time roles in international player relations.

The idea, said Wimbledon, is to ‘to foster collaboration and engagement with the tennis community’ as it tries to shake off its longstanding reputation for standing aloof from the rest of the sport, both at home and abroad.