Sugar babies reveal on Whisper what sugar daddy pays for including groceries, rent and £30k a month

You might think that being a sugar baby is all about the material perks in exchange for companionship or sex, but some of these relationships come with unexpected twists, from women who fall in love with their benefactor to enjoying the physical side of things.

Taking to anonymous sharing app Whisper, women from around the world have revealed what really goes on in their sugar daddy relationships, and some of the confessions might surprise you.

One woman said that her sugar daddy is only eight years older and that she enjoys having sex with him, while another admitted she’d doing it to pay for her child’s Christian education, rather than handbags and holidays.

Some sugar babies admitted they enjoyed their arrangement with one confessing she has fallen ‘in love’ with her sugar daddy.

But elsewhere, another said that she wishes she could end her financial dependency on her sugar daddy as she loves her real boyfriend.

Sugar babies from across the globe have taken to anonymous sharing app Whisper to reveal what their sugar daddy pays for in exchange for companionship or sex. One woman from Church Langley, Essex claimed her sugar daddy pays her a £30,000 monthly allowance, a penthouse apartment and around £300,000 in clothes but she’s in love with him 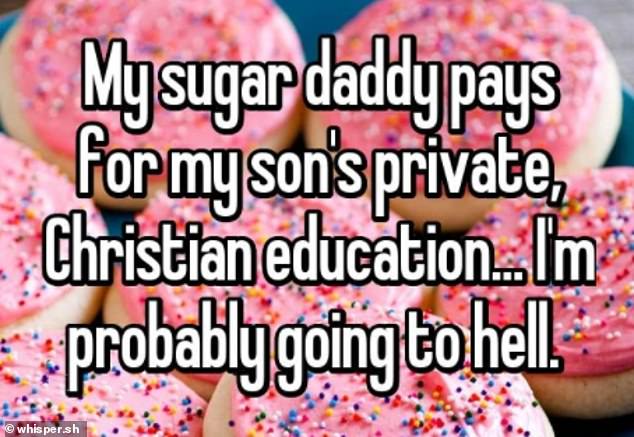 Another, from Trenton, New Jersey, admitted that her arrangement with a wealthy man funds her son’s private Christian education 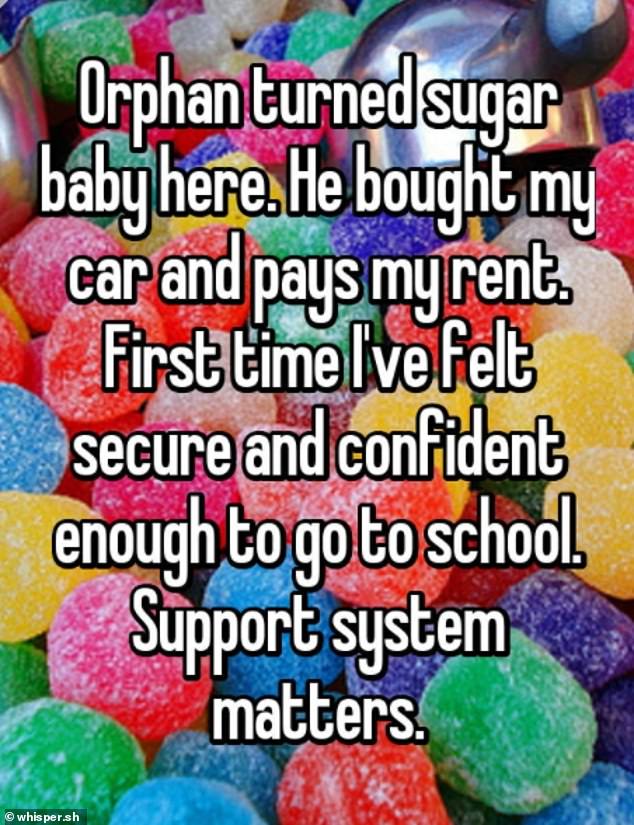 A sugar baby from Ohio, said her sugar daddy provides her with a ‘support system’ to feel secure after both her parents  died 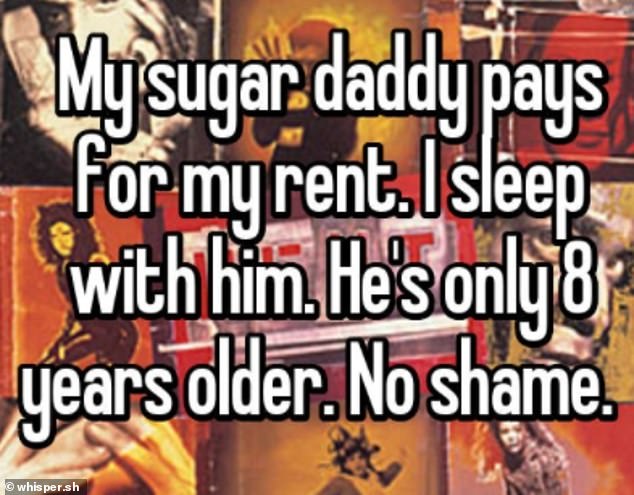 One woman, from an unknown location, said she has ‘no shame’ about having sex with her sugar daddy in exchange for him paying her rent 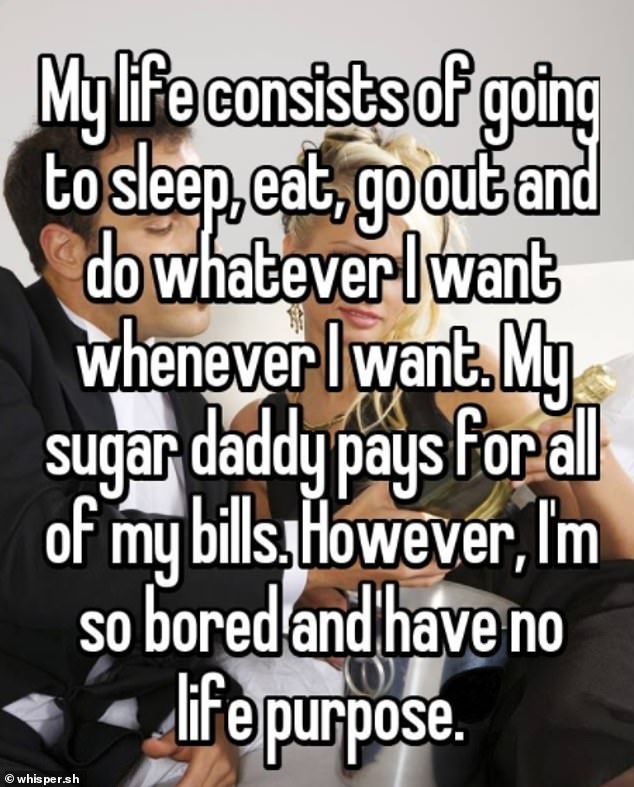 Empty life: A sugar baby in Toronto confessed that her luxury lifestyle funded by her wealthy sugar daddy has left her feeling ‘bored’ and that her life has ‘no purpose’ 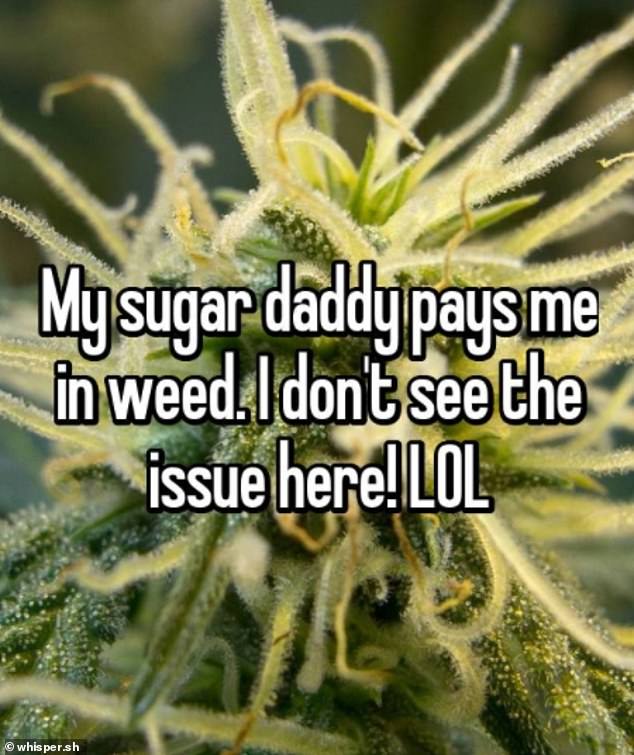 A marijuana-enthusiast in Ann Arbor, Michigan confessed that she is happy that her sugar daddy pays her in weed 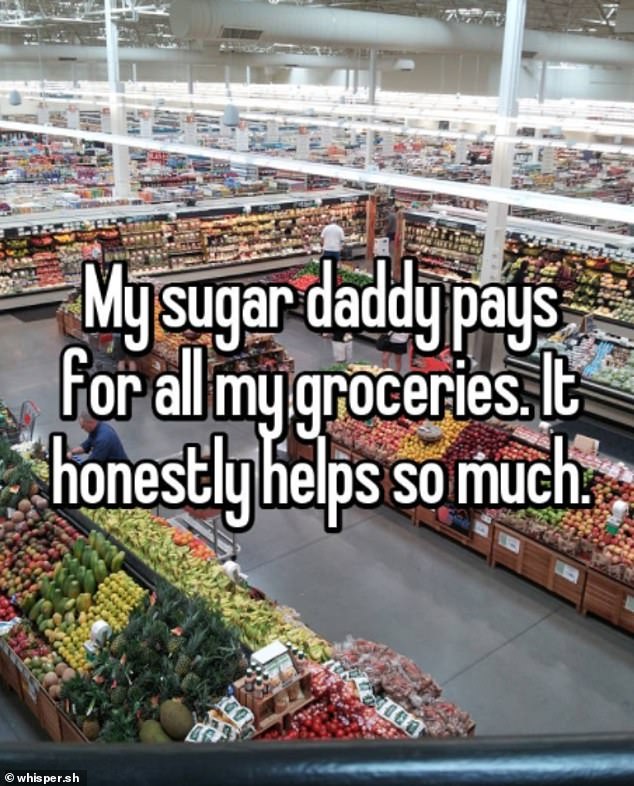 A women in Ardmore, Oklahoma said her sugar daddy helps her ‘so much’ by paying for basic items such as her grocery bill 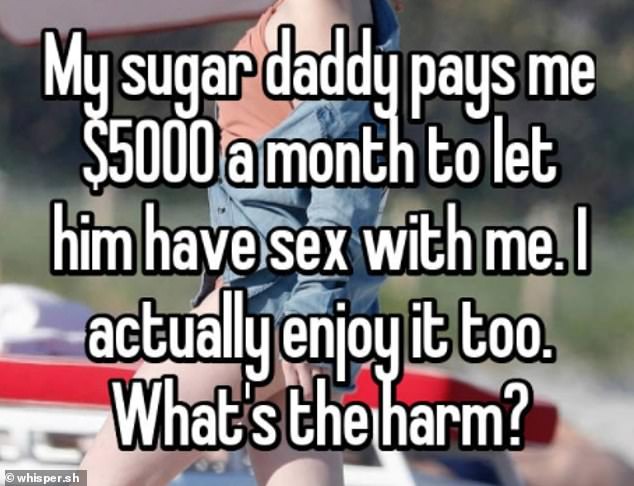 Some sugar babies admitted they like the arrangement with one woman from Minnesota confessing she enjoys the sex she has with her sugar daddy in return for $5,000 a month 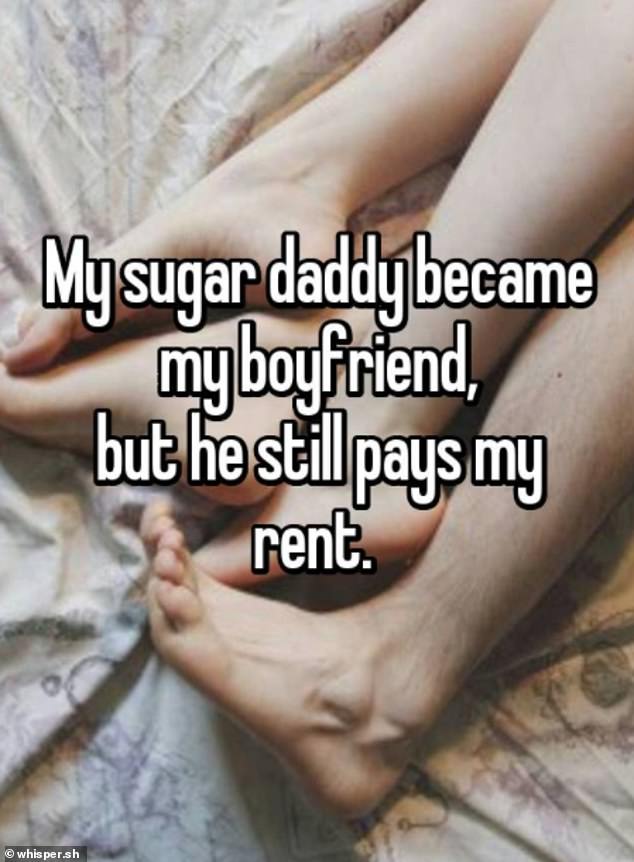 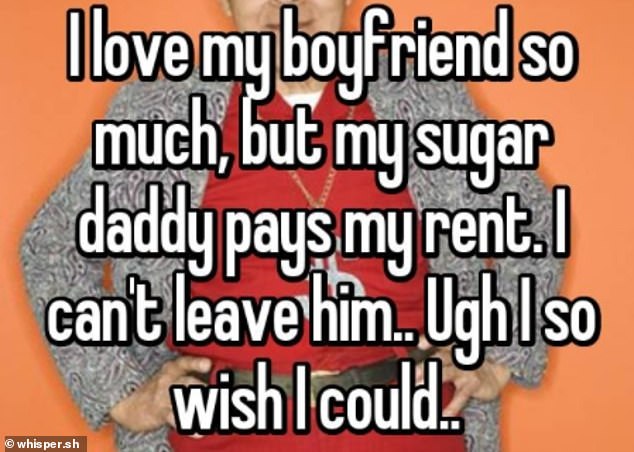 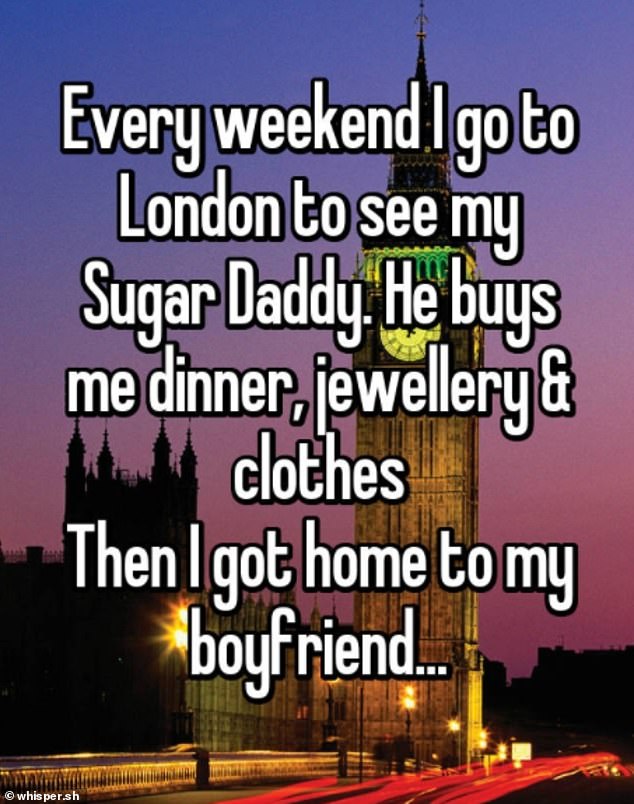 One woman from Chelmsford, Essex, reveals how she goes to London every weekend to be showered in lavish gifts – and then returns home to her boyfriend 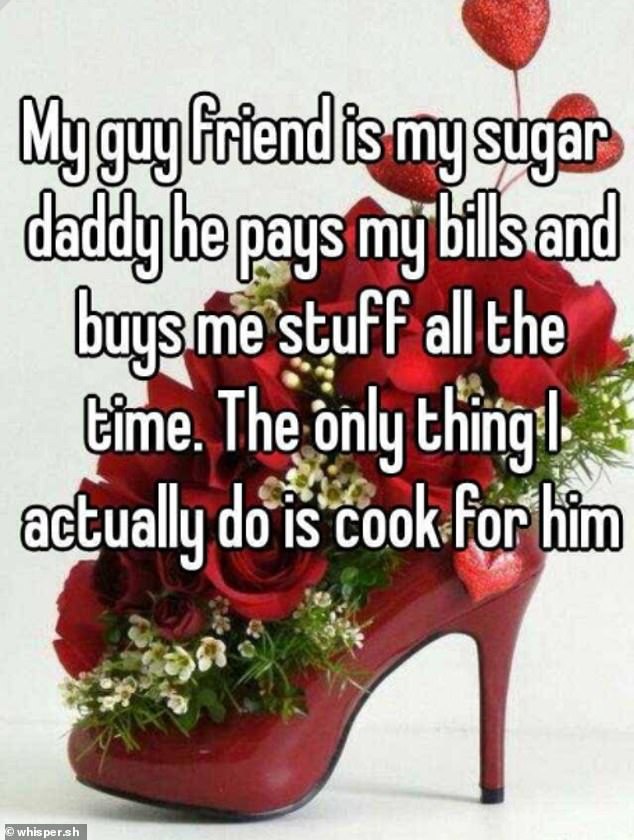 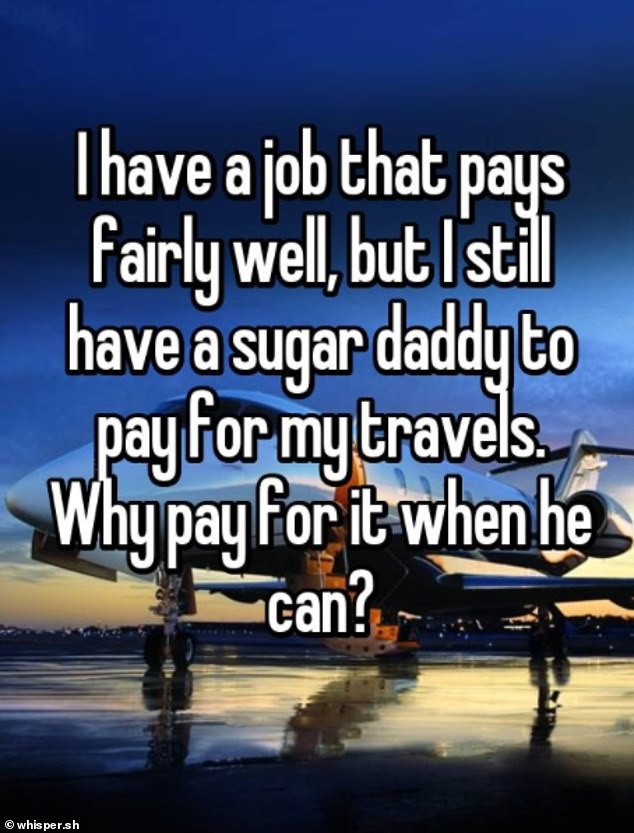 A woman with a well-paid job in Pymatuning, Pennsylvania, said that she allows her sugar daddy to pay for her vacations 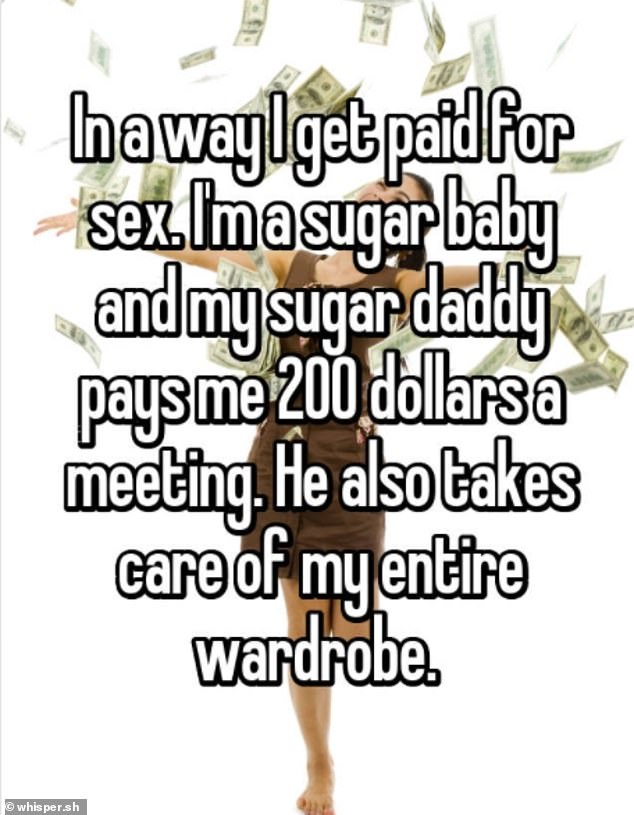 One sugar baby in Elyria, Ohio, said that she has become so dependent on the extra $1,000 her sugar daddy pays her every week that she doesn’t know how she would live without it