The office of the mayor of Paris has called adverts for a new dating site aimed at linking students with rich men and women ‘shameful’ and said officials will work with police to remove it from the city.

A trailer hired by the website richmeetbeautiful.fr was widely condemned by students and on social media after it was parked in the 5th district of Paris, home to the Sorbonne University.

On it was a picture of a man, whispering suggestively into the ear of a woman.

‘Hey students! Romantic, passionate and no student loans. Go out with a Sugar Daddy or Sugar Mama,’ read the poster.

The poster advertising ‘Sugar Daddy, Sugar Mama’ was towed to an area of Paris that is home to the Sorbonne University.

Reacting to images circulated on social media the Paris mayor’s office said late on Wednesday that it had alerted prosecutors and would seek to ban the site.

The city of Paris used its official Twitter account to condemn the posters, while Deputy mayor Helene Bidard said she hoped investigators would press charges for pimping.

‘As well as the public order problems caused by an advert that can be seen by minors, this site is an offence against women,’ she said.

‘Behind these airbrushed images there are young people who could end up in prostitution.’

She added the Norwegian-based website ran into similar problems last month with a campaign in Brussels where authorities also launched a prostitution probe and impounded posters. 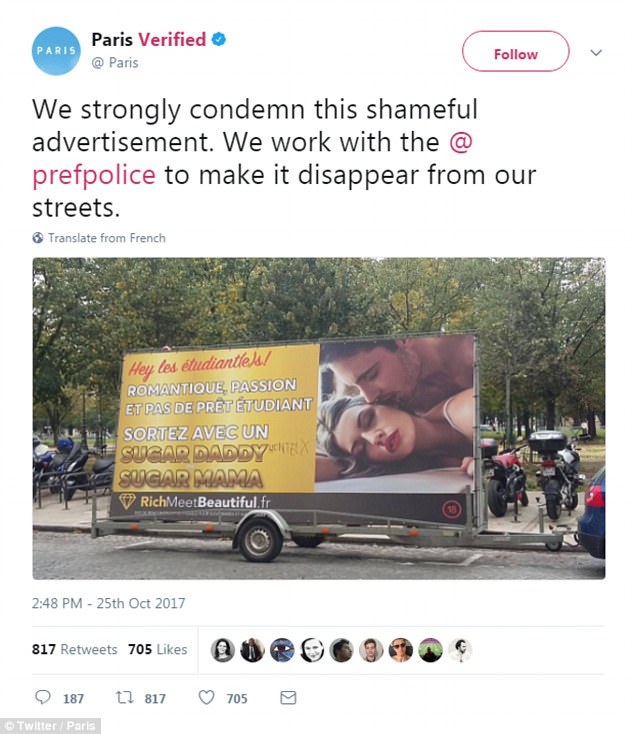 ‘It’s a classic misunderstanding. We are like a normal dating site, but financial is part of the checklist.’

In France, student association FAGE said it had also lodged a criminal complaint about pimping.

The body said the advertising campaign ‘is aimed at attracting vulnerable students… and encouraging them to perform sex acts with older people’.

Paris police had opened an investigation and that the vehicle carrying the billboard had been stopped.