A Centenarian who fought in the Second World War has been awarded an MBE for helping to educate children about war.

Mordaunt Cohen, 101, was a newly qualified solicitor when he saw refugee children being brought to his home city of Sunderland and decided to enlist in 1940, without waiting to be called up.

He served as a gunner in an artillery regiment but was then commissioned as an officer and sent to command troops in Nigeria and later in Burma, where he fought against the Japanese, only returning home in 1946. 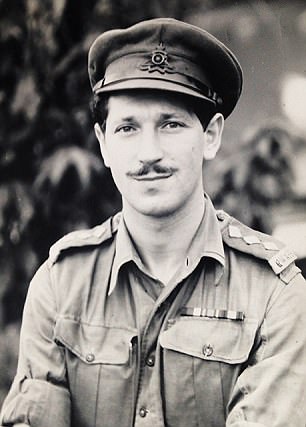 Mordaunt Cohen (pictured today aged 101, left, and during the Second World War, right) has been given an MBE for helping educate children about conflict

Mr Cohen was awarded an MBE for his work teaching in schools about the Second World War, and for a series of films recorded to mark VJ Day.

He said: ‘I am deeply humbled and honoured to receive this award. When I was commanding troops many miles from here, in very tough conditions, never did I even imagine that aged 101, I would receive such an honour.

‘It is my mission to make sure that future generations will understand what our armed forces went through, so that we can all live freely and in peace in this country.

‘As a British Jewish veteran, I’m especially proud of the immense contribution made by the 60,000 Jewish soldiers who served our country in World War Two.

‘I would like to dedicate this award to the soldiers who didn’t come home, and who sadly paid the ultimate sacrifice.’

Mr Cohen is one of two centenarians named in the New Year Honours. Helena Jones, also 101, is to receive a British Empire Medal for her work with young people in Brecon, Powys.