A man has been left out of pocket after a pedestrian ragdolled himself onto his moving car and the driver’s insurance company rule he was at fault for the insane incident.

‘Can anyone help me identify this idiot? It’s being assessed as an “at-fault” claim because I wasn’t able to get his details (it wasn’t safe to),’ the video poster wrote.

He was driving on Mains Road at Sunnybank, in Brisbane’s south, on December 17 when a man wearing a black T-shirt, shorts and baseball cap suddenly started to run from the footpath onto the road.

To the horror of the driver, the man then ran and jumped feet first up onto the bonnet of the still moving car.

A man (pictured) wearing a black t-shirt, shorts and baseball cap suddenly walked onto the road from the left

The momentum spun the jumper to the left and he bounced off the car’s windscreen before landing on his feet, with his shorts beginning to fall down, exposing his bottom.

His black Chicago White Sox cap remained on the car as the shocked driver slowly moved off, possibly afraid the ragdoller was about to try it again.

As he picked up speed, the cap blew off, with the driver later saying he had not stopped as he felt it was unsafe to do so.

The video has gone viral since being posted on Wednesday, and by Thursday morning already had thousands of comments and likes on Facebook.

Some commenters defended the driver from those accusing him of leaving the scene of an accident.

Another said: ‘All you guys saying hit and run… in that position you just go straight to the cops. 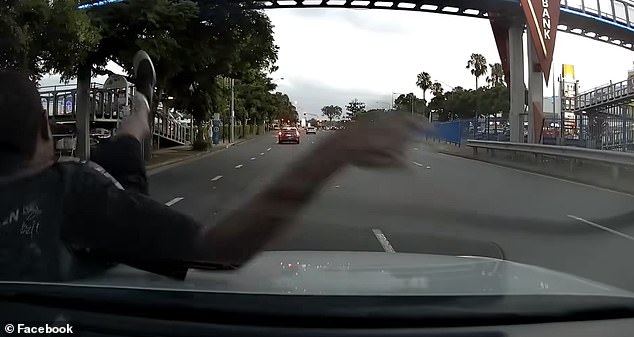 ‘No way you stop and get out with someone like that roaming around. Use your heads and actually watch the footage.’

In trying to help the driver find the ragdoller, another commenter said ‘My guess is that he’s at the hospital with any luck’.

One commenter offered sensible advice about the police and insurance, saying the driver should have ‘gone to the closest station made a report and showed them the footage’.

‘At least then you would have a report for your insurance company,’ they added. 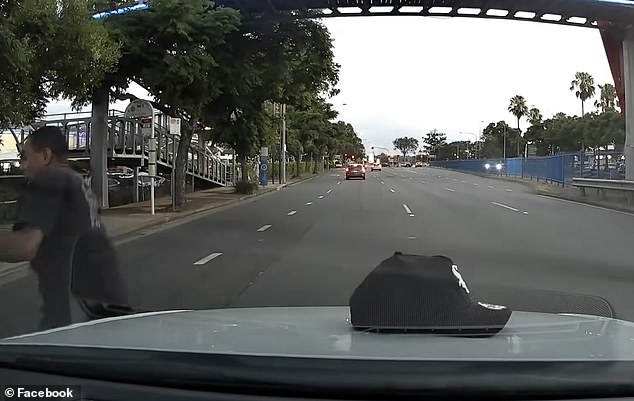 The momentum of the car spun the man (pictured) off the car windscreen and back onto the road, leaving his Chicago White Sox cap on the bonnet

Another commenter advised the driver to ‘go to the Ombudsman if the insurer is refusing to accept very clear evidence that this was not your fault and threatening your no-claim bonus’.

Queensland Police confirmed to Daily Mail Australia the incident had been reported to officers.

‘A complaint has been made to police in relation to this matter, alleged to have occurred on December 17 along Mains Road at Sunnybank,’ they said.

‘Investigations are ongoing. Police would appeal to anyone who may have witnessed the incident to come forward.’

The poster of the video has also been contacted seeking comment for this story.