Sunseekers have been told to enjoy the glorious sunshine while it lasts, as forecasters say ‘unpredictable’ thunderstorms will cover the UK by Sunday.

Highs will be hotter than Thailand – but the sweltering humidity will bring thunderstorms, more floods and muddy start to Glastonbury Festival.

Hot air moving in from the south is shown on a dramatic weather map covering Britain and stretching down to Spain and as far north as Norway.

Women race across Camber Sands beach in east Sussex with an inflatable board as they enjoy a day of brilliant sunshine. Forecasters reported that the ‘dry, fine and sunny’ weather will brings highs of around 25C in the south and spotless skies across most of the country 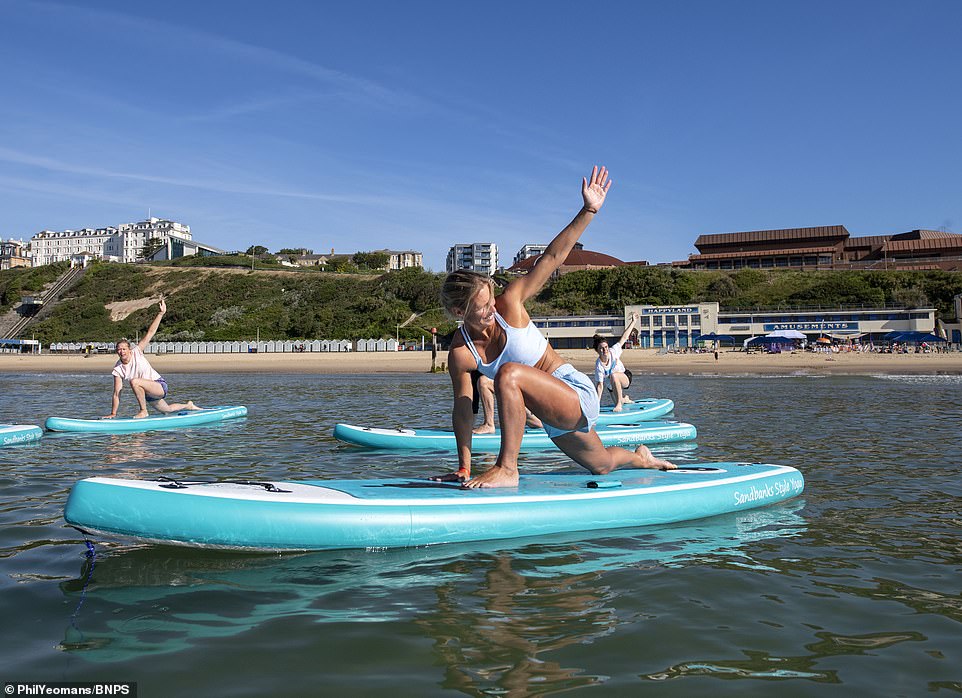 Flexible festival goers took to calm seas today for Britain’s first ever beach yoga festival on Bournemouth beach in Dorset. Pictured: Women taking part in a 30-minute class on the first of the three-day festival 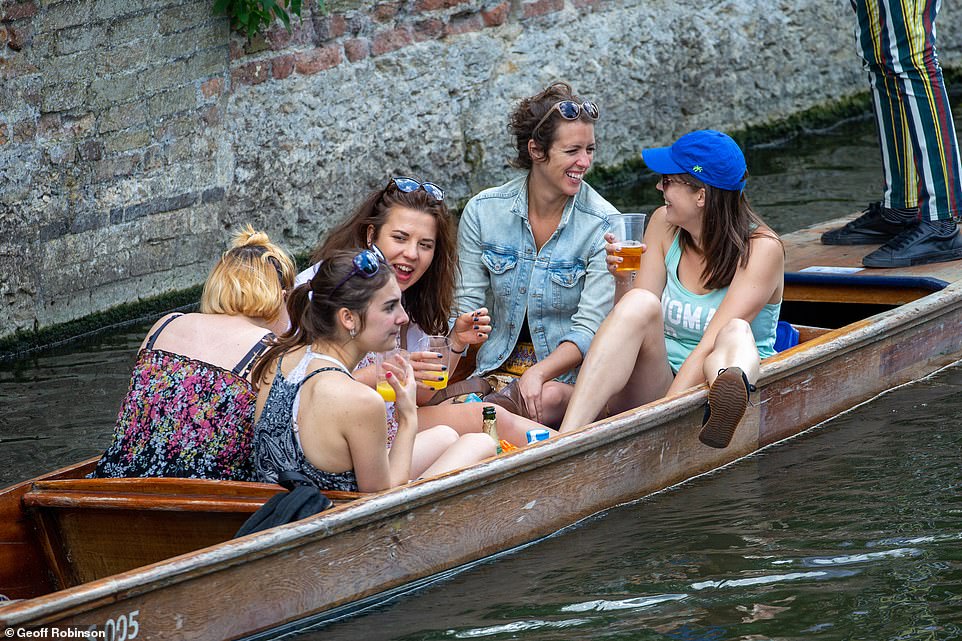 A group enjoying a punt and a drink on the River Cam in Cambridge. The Met Office forecast states today most areas will have a fine and dry day with plenty of sunny spells with only a few showers possible across northern Scotland 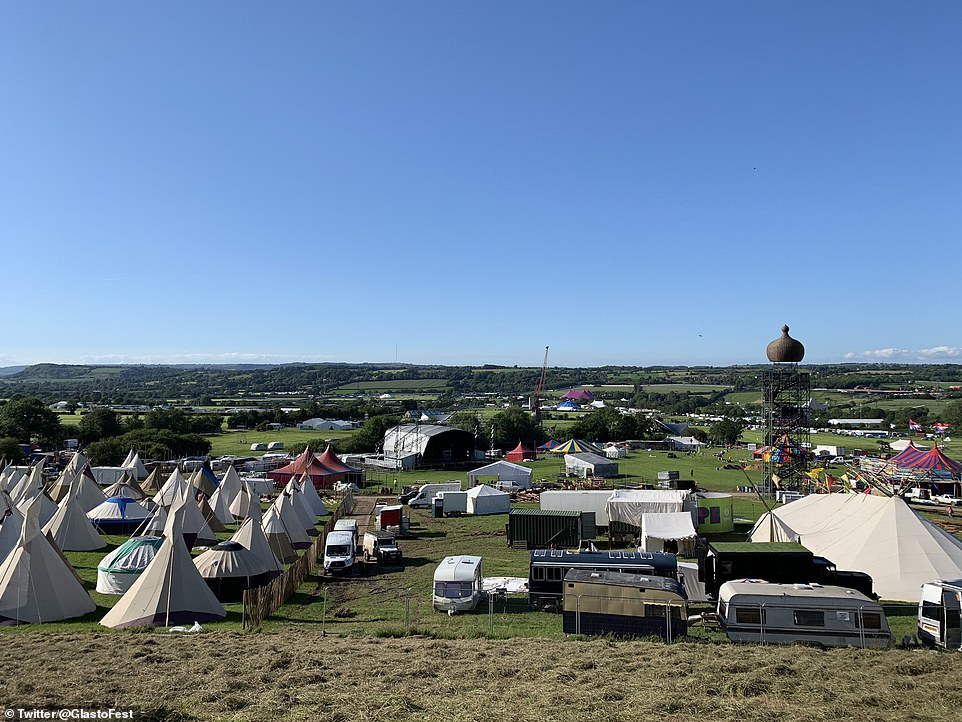 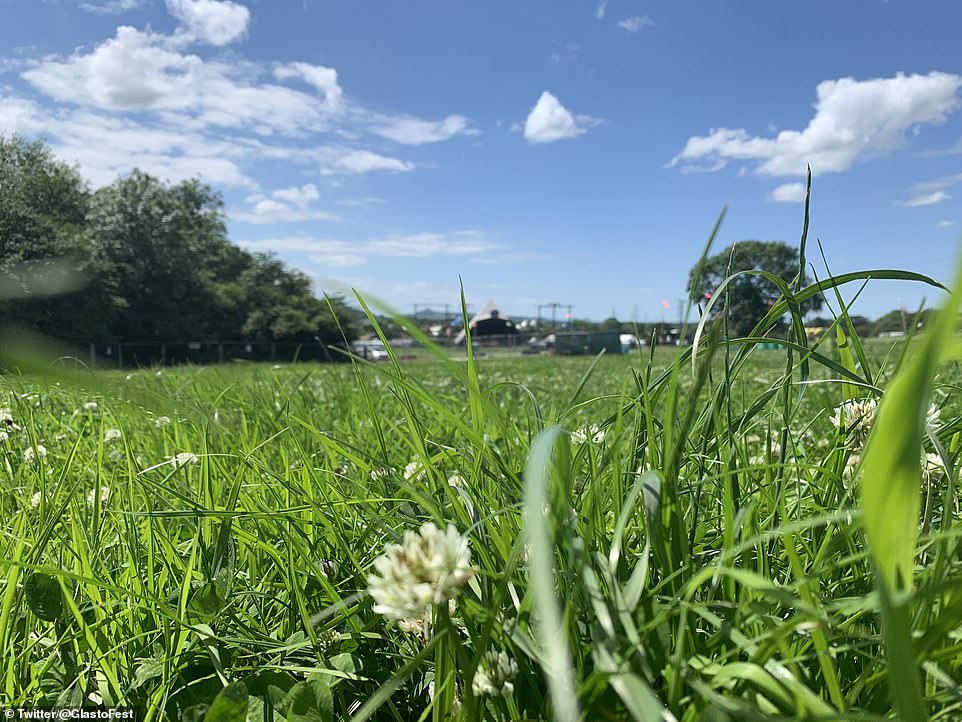 The Pyramid Stage, first constructed in 1971, stands tall in the middle of the Somerset farmers fields where over 135,000 revellers will enjoy three days of headline acts including The Killers, The Cure, Stormzy and Kylie Minogue

But an extensive thunderstorm, formed by hot moist air from the south, will dominate the skies over Britain and could drop over 40mm of rain in the space of an hour in some areas.

Met Office forecaster Simon Partridge said if some areas were ‘really unlucky’, they could experience downpours of 60mm.

Weather warnings are set to cover the Wales and the north east from 7pm tomorrow, and most of the UK throughout Monday and Tuesday.

‘An extensive heatwave is on the way for much of the UK for the best part of a week,’ said Simon.

’35C is possible in the UK, with heat from north Africa covering a big area of Europe and up to 41C in western Germany and France. 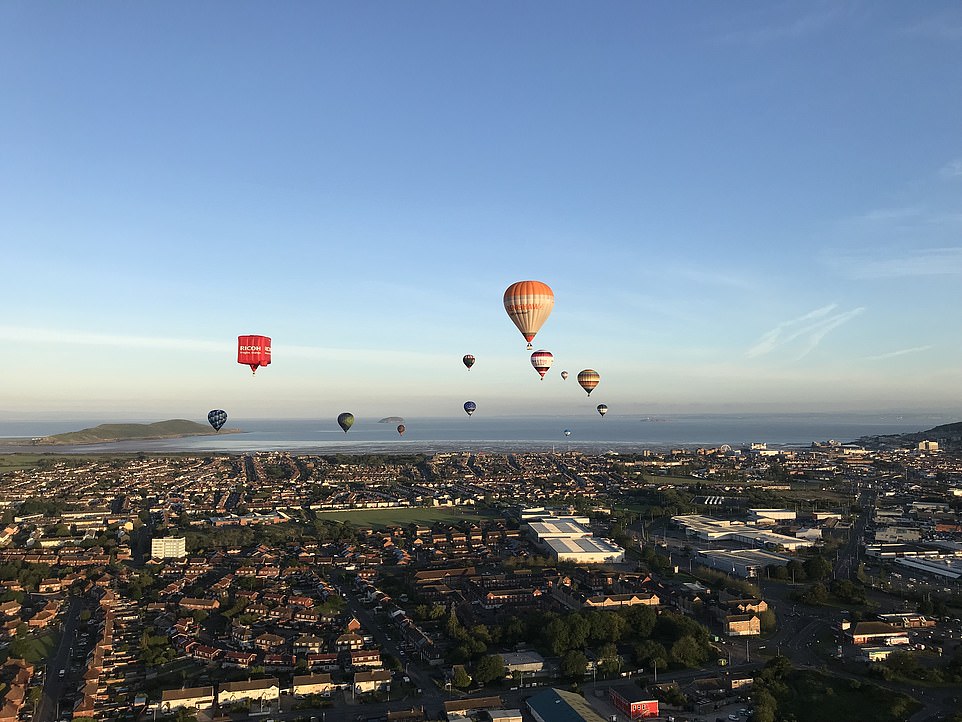 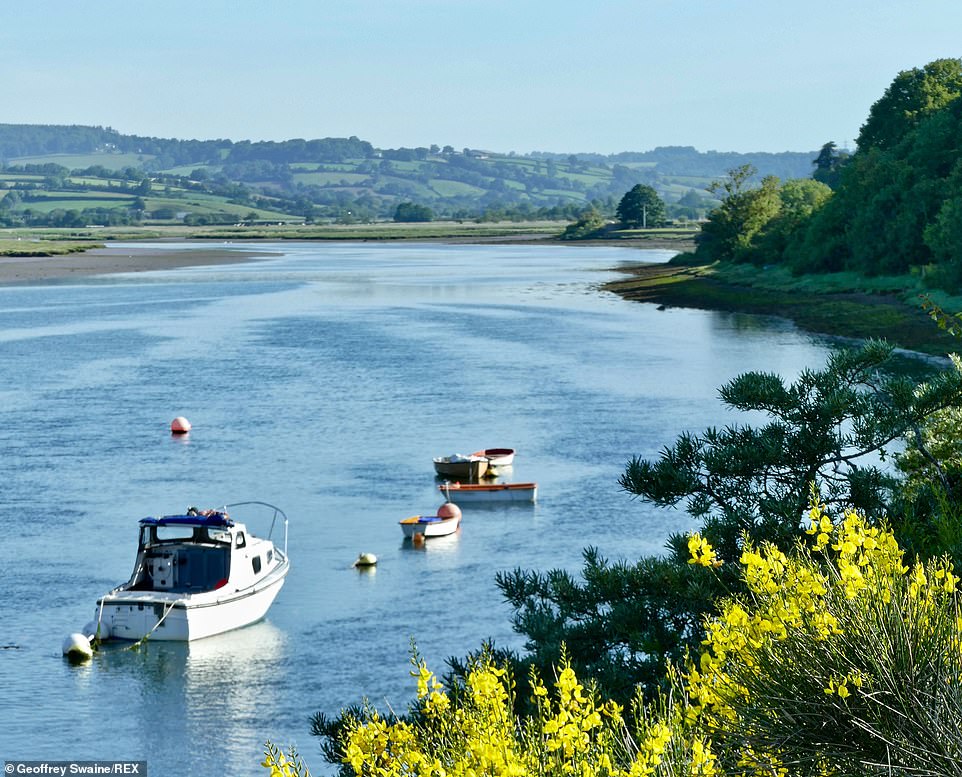 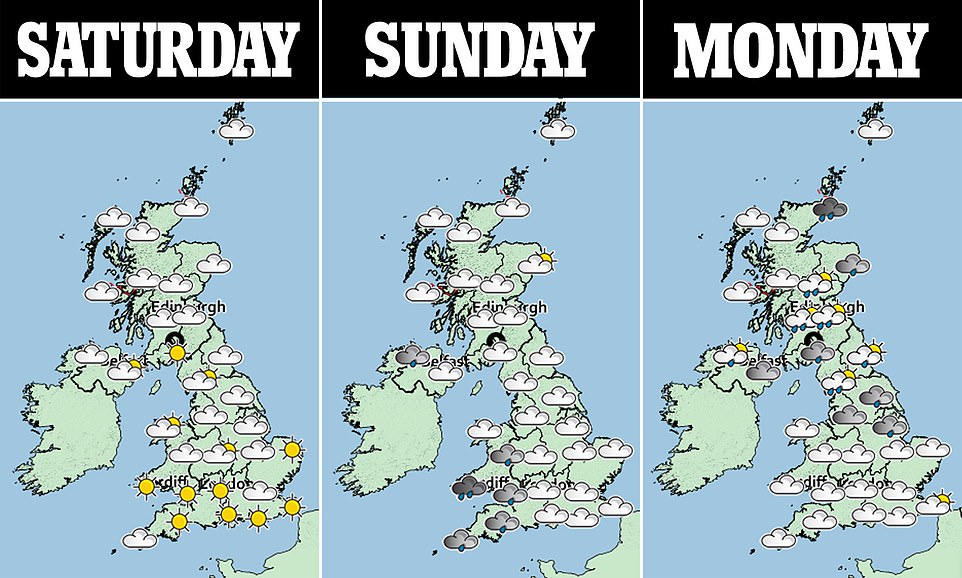 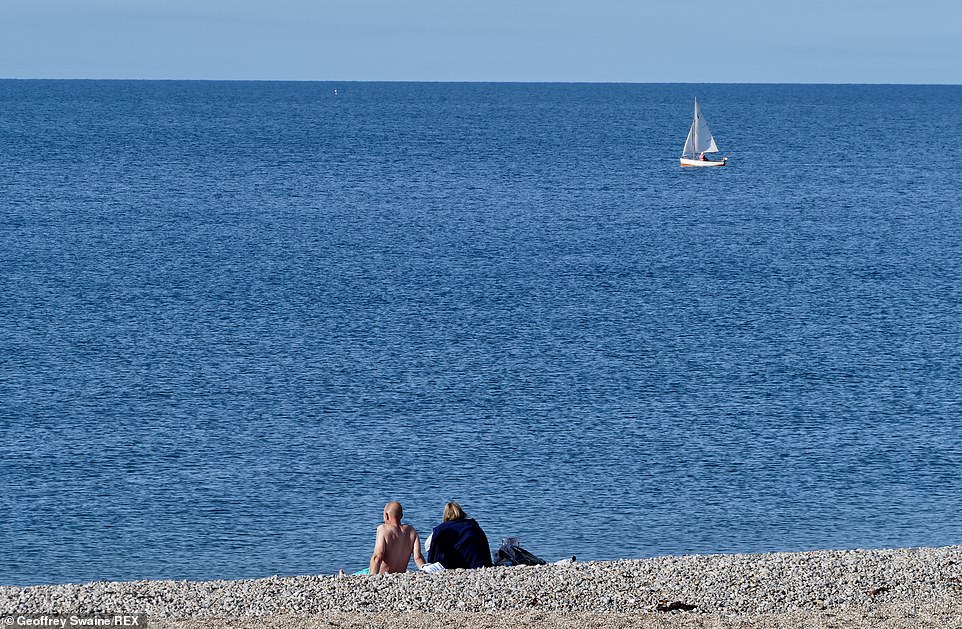 Two people enjoy the sunshine on Seaton Beach in Devon earlier today. A high pressure area currently holds a firm grip over the UK, but on Sunday the warm moist area is expected to turn to rain over parts of Devon and the south west 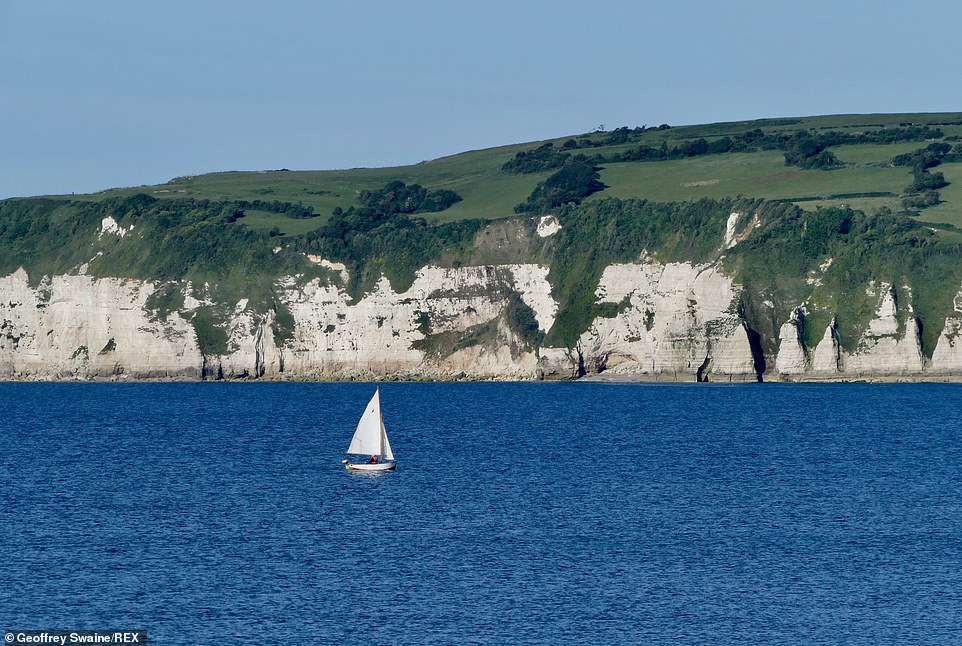 A yacht passes the Hooken Cliffs near Beer on Devon’s south coast. The first Government heat health warning of the year has put hospitals on alert for an increase in admissions

‘After the UK has 28C on Sunday and Monday, there’s potential for 31C on Tuesday, 32C on Wednesday and 35C on Thursday and Friday, before 30C on Saturday.

‘But it will be muggy with a mix of sunny spells and cloud, cloudiest in the East.

‘Thunderstorms until Tuesday could see surface water flooding, with some showers from Wednesday.

‘Glastonbury’s ground, already wet, could see heavy showers leading into the event and the odd shower during it, so pack wellies but be prepared for heat, with 32C possible.’

The Weather Outlook forecaster Brian Gaze said: ‘Highs around June’s temperature record are possible as one of Europe’s biggest heat plumes for many years arrives.

The first Government heat health warning of the year has put hospitals on alert for an increase in admissions and ordered health and social workers to prepare to make daily contact with the ill, vulnerable and elderly.

But the Met Office forecast thunderstorms daily until Tuesday, warning of more floods from almost a month’s rain in a day – 50mm in England and 100m in Scotland.

Showers follow from Wednesday. Glastonbury, which begins on Wednesday, faces 32C but risks mud after double the usual rainfall – 91mm – soaked Somerset so far this month.

Despite a wet start, the Met Office said summer is 10 times more likely to be much-hotter-than-average than much-cooler-than-average across June, July and August.

Much-hotter-than-usual UK average temperatures are up to 50 per cent probability.

Much-cooler-than-normal conditions are just a five per cent chance.

The Met Office three-month forecast said: ‘For June-August as a whole, the probability UK average temperatures will fall into the warmest of our five categories is 45-50 per cent. The coldest category is five per cent.

‘The probability of higher-than-average pressure, associated with warmer-than-average conditions, is increased by North Atlantic sea surface temperature patterns. These are similar to, but not as marked, as last year.’

The Met Office 30-day outlook said: ‘Temperatures will continue to feel warm. Temperatures during July 6-20 are likely to be slightly above average.’