Super Blood Moon May 26 2021: How you can best view the total lunar eclipse

By Kirsten Jelinek For Daily Mail Australia and Aap

A stunning super blood moon is set to grace the night sky across Australia on Wednesday for the first time in more than three years.

The celestial phenomenon occurs when a total lunar eclipse and a super moon coincide at the exact moment the moon is in perigee – the closest point in its orbit to Earth.

The eclipse will be visible on Wednesday night from about 7.45pm in New South Wales, Tasmania, Victoria, Queensland and ACT and will rise in an easterly direction.

The moon rises as surfers wait for waves for the super blood moon that will take place at around 7.44pm in Sydney 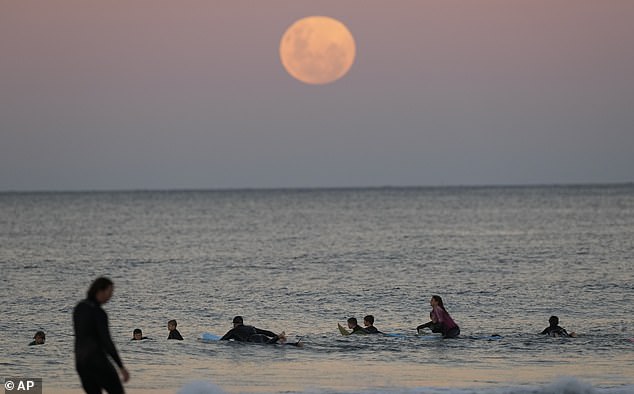 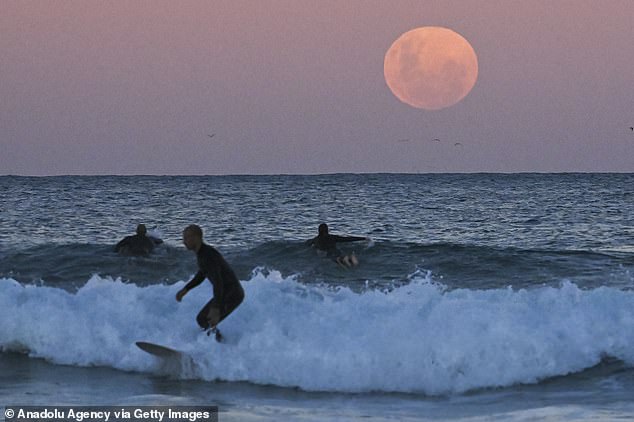 For South Australia and the Northern Territory, the eclipse will begin at 7:15 pm local time and Western Australia will see the eclipse to a lesser extent at 5.45pm.

At the start of the eclipse, the moon will slowly darken while passing into the Earth’s shadow and the process will take more than an hour.

The totality period – when the moon is completely in shadow – will transform into a reddish brown colour that will last for approximately 14 minutes and begin at 9.11pm AEST.

The super blood moon and total lunar eclipse will conclude at 10.52 pm for New South Wales, Tasmania, Victoria, Queensland and ACT and 10.22 pm for South Australia and the Northern Territory. 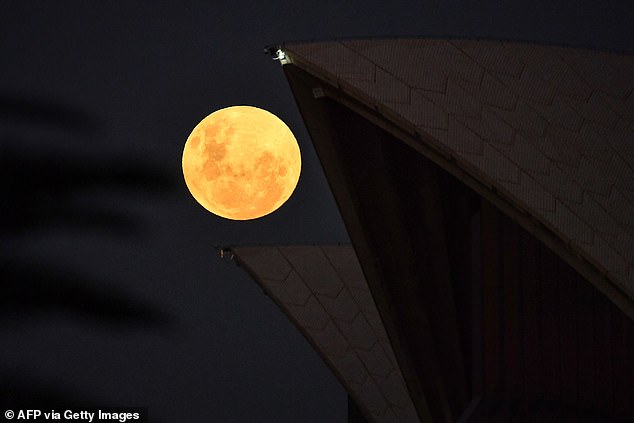 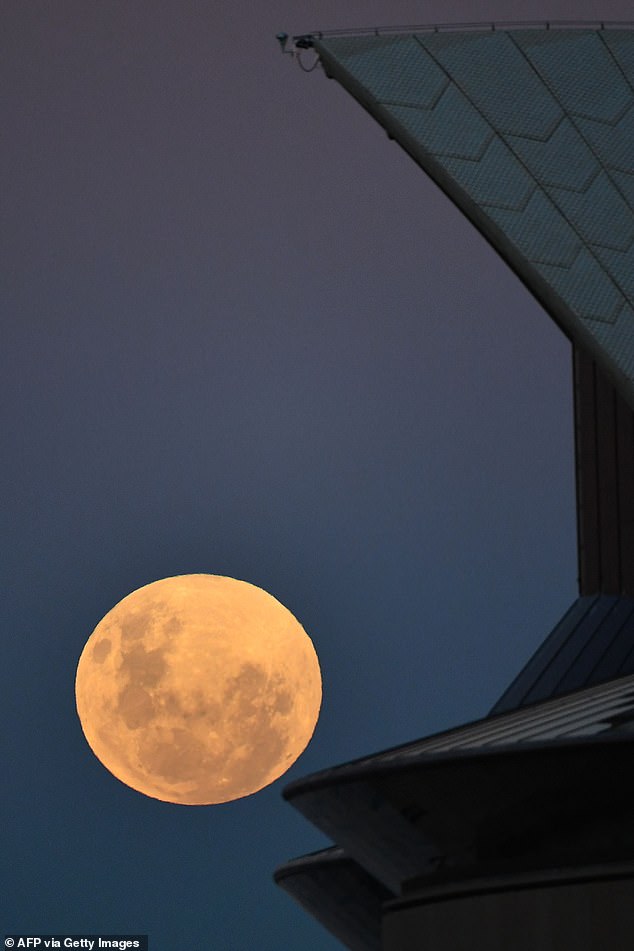 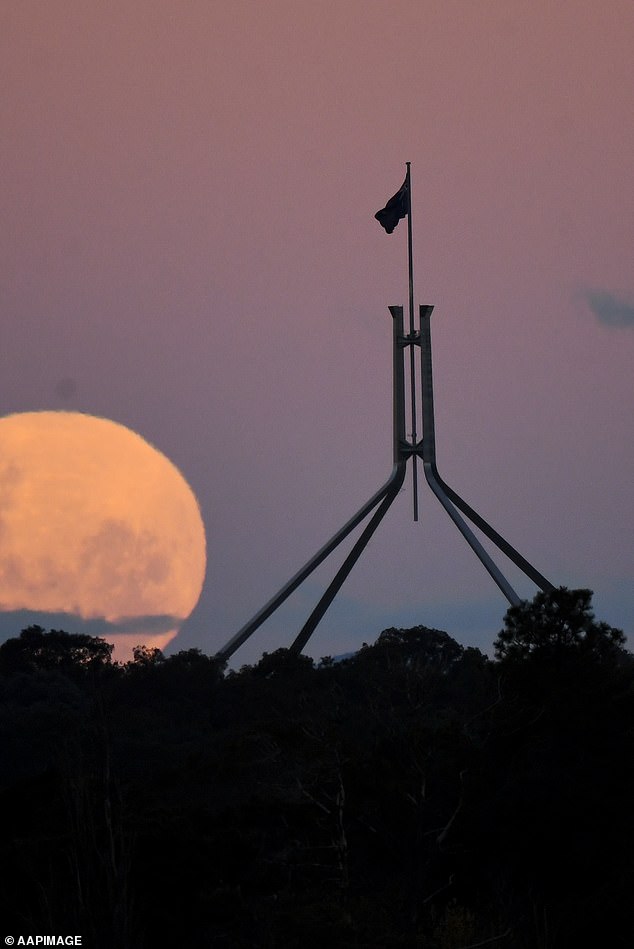 The red-brown moon visible from about 7.44pm in NSW, TAS, VIC, QLD and ACT (pictured: Moon rises over the Opera House ahead of the super blood moon) 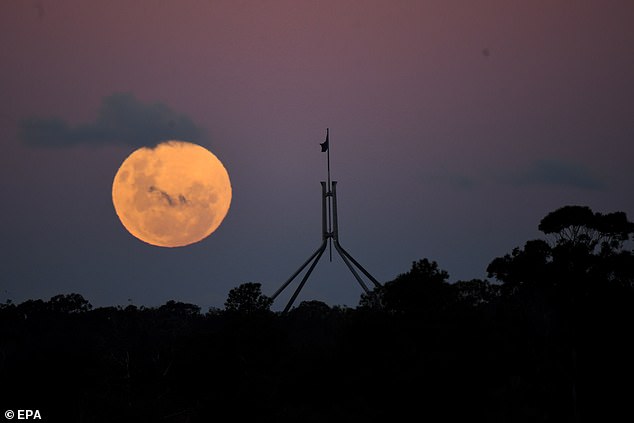 NASA’s Jet Propulsion Laboratory said while the moon passes through Earth’s shadow it causes ‘it to darken and usually become a reddish brown colour.’

‘The red colour comes from sunlight filtering through Earth’s atmosphere and sunsets happening around our planet at that time,’ NASA said in a video.

‘Because of the reddish colour, a lunar eclipse is often called a ‘blood moon’.

Australian National University astrophysicist Brad Tucker says the shadow creates an amazing orange-red glow that looks a bit like sunrise or sunset with the phenomenon happening every five years or so.

‘It doesn’t happen that often to get this combination … so it’s definitely a special sight and one that you don’t want to miss.

‘As the moon perfectly centres in the earth’s shadow, it hits this orange-red light. So during the peak of the total lunar eclipse, you are seeing earth’s sunrise and sunset lighting up the moon.’ 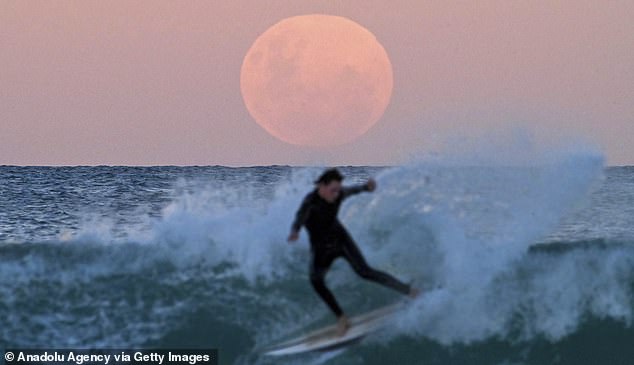 NASA said while the moon passes through Earth’s shadow it causes ‘it to darken and usually become a reddish brown colour’ (pictured: yacht sails past as moon rises in Sydney) 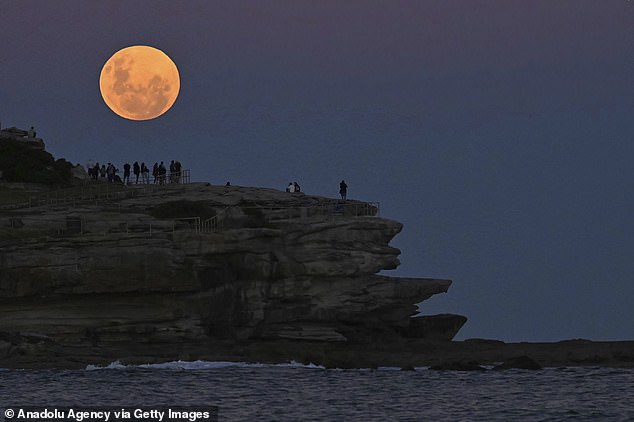 Mr Tucker advises that stargazers watch the super blood moon periodically throughout the night until it fades away after 10pm.

Unlike solar eclipses, lunar eclipses are safe to view with the naked eye without the assistance of equipment.

In the instance of bad weather the rare event will be live streamed by the Virtual Telescope and the European Space Agency.

When to view the super blood moon on May 26