Super-strength vitamin B6 supplements may help people recall their DREAMS

Vitamin B6, which is found in tuna, bananas and chickpeas, may help people better recall their dreams, new research suggests.

Taking a strong dose of such supplements for just five days improves people’s abilities to remember their dreams by 64 per cent, a study found.

Although unclear exactly why this occurs, one theory is vitamin B6 helps to convert an amino acid to a chemical messenger that influences emotion and sleep.

Study author Dr Denholm Aspy, from the University of Adelaide, said: ‘The average person spends around six years of their lives dreaming.

‘It may be possible to use lucid dreaming for overcoming nightmares, treating phobias, creative problem solving, refining motor skills and even helping with rehabilitation from physical trauma.

‘In order to have lucid dreams it is very important to first be able to recall dreams on a regular basis.’

Lucid dreaming occurs when people know they are dreaming while asleep.

Vitamin B6, which is found in tuna, may help people better recall their dreams (stock)

WHAT IS VITAMIN B6? AND WHAT FOODS CONTAIN IT?

Vitamin B6, which is also known as pyridoxine, allows the body to use and store energy from protein and carbohydrates in food.

It is also involved in the formation of blood cells that carry oxygen around the body.

Men need around 1.4mg a day and women approximately 1.2mg.

People should be able to get all of the vitamin B6 they require from their diets.

Taking more than 200mg a day for a long time can lead to a loss of feeling in the arms and legs.

People should not take more than 10mg a day unless advised by their doctor.

‘I couldn’t wait to go to bed and dream!’

One study participant said: ‘It seems as time went on my dreams were clearer and clearer and easier to remember.

‘I also did not lose fragments as the day went on.’

Another added: ‘My dreams were more real, I couldn’t wait to go to bed and dream!’

Results further suggest vitamin B6 supplements do not affect dream vividness, bizareness or colour, as well as having no impact on people’s sleep in general.

Dr Aspy adds further research is required to determine if dietary vitamin B6 has the same effects as supplements’.

How does vitamin B6 lead to clearer dreams?

Additional theories include that vitamin B6 leads to higher levels of chemical messenger that suppress the REM stage of sleep. REM is characterised by rapid-eye movements, faster heart rates and more dreaming.

This suppression may then cause a rebound effect that results in more intense dreams in the last few hours of sleep.

Some also believe vitamin B6 disrupts sleep and causes people to awaken more in the night.

This may allow more opportunities for dreams to be transferred from short to long-term memories.

The researchers analysed 100 people aged between 18 and 40 from across Australia.

At the beginning of the study, the participants claimed to rarely remember their dreams.

They took 240mg of vitamin B6 before bed for five consecutive days; this is the equivalent of 558 bananas.

The sweet fruit contains around 0.43mg of vitamin B6. Seventy-five grams of tuna and a three-quarter cup of chickpeas both contain 0.84mg.

The findings were published in the journal Perceptual and Motor Skills. 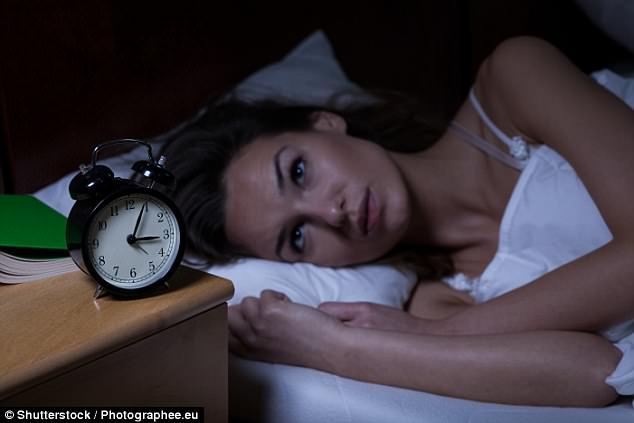 Less than eight hours sleep is linked to anxiety and depression

This comes after research released last January suggested having less than eight hours sleep is linked to anxiety and depression.

Insomniacs are less able to overcome negative thoughts than those who get sufficient shut eye, a study found.

Being unable to nod off also reduces people’s ability to disengage from negative emotions, the research adds.

Study author Professor Meredith Coles, from Binghamton University, said: ‘We found that people in this study have some tendencies to have thoughts get stuck in their heads, and their elevated negative thinking makes it difficult for them to disengage with the negative stimuli that we exposed them to.

‘We realized over time that this might be important – this repetitive negative thinking is relevant to several different disorders like anxiety, depression and many other things.’