The wonder of nature is limitless.

But, in case that wasn’t already clear, a selection of brand new images from the National Geographic’s Nature Photographer of the Year contest 2017 prove it.

Entries from the third and fourth galleries highlight nature’s incredible power, ranging from a pair of clashing zebras to a pod of sleeping sperm whale.

Also shortlisted is a stunning image of lava flowing from Russia’s Klyuchevskaya Sopka, the highest active volcano in Eurasia.

To view more entries to the National Geographic Nature Photographer of the Year contest, click here.

Wow-factor: A pair of divers are seen swimming over a pod of sleeping sperm whales in the depths of the Atlantic Ocean near Dominica 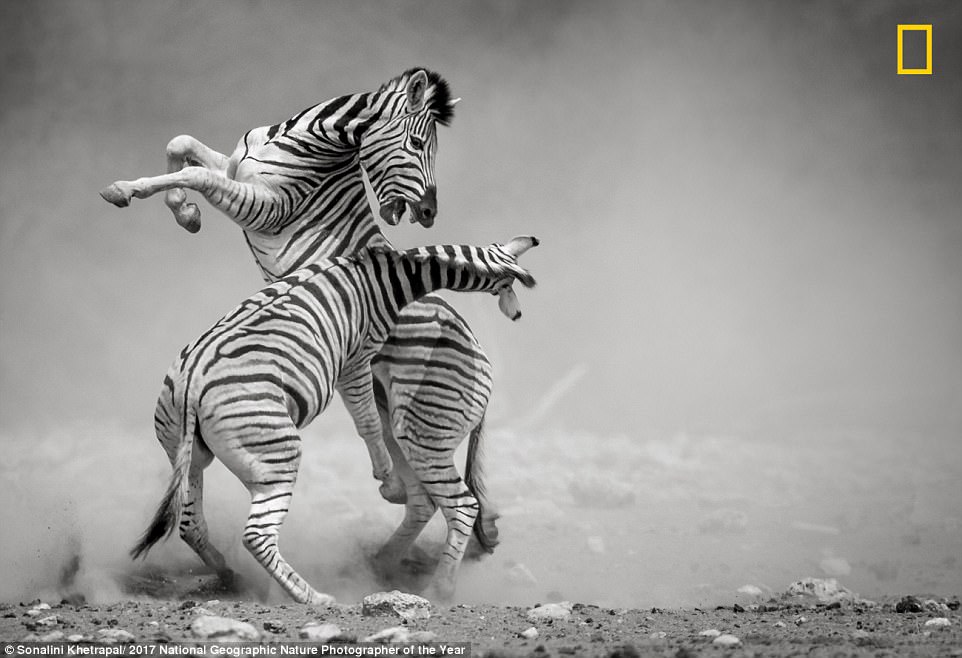 Duel: Landing heavy blows, a handsome pair of male zebras engage in a dramatic clash at Etosha National Park in Namibia. The photographer, Sonalini Khetrapal, said: ‘The goal of my trip was to photograph zebras with their striking coats across this backdrop. A herd of zebras arrived at the waterhole to quench their thirst. Suddenly,there was chaos and thick dust clouds blinded our vision. Within moments, two male zebras emerged from the dust, landing blows at each other with their hooves and heads. The duel lasted only a few minutes but it gave me an opportunity to capture this heavily charged moment’ 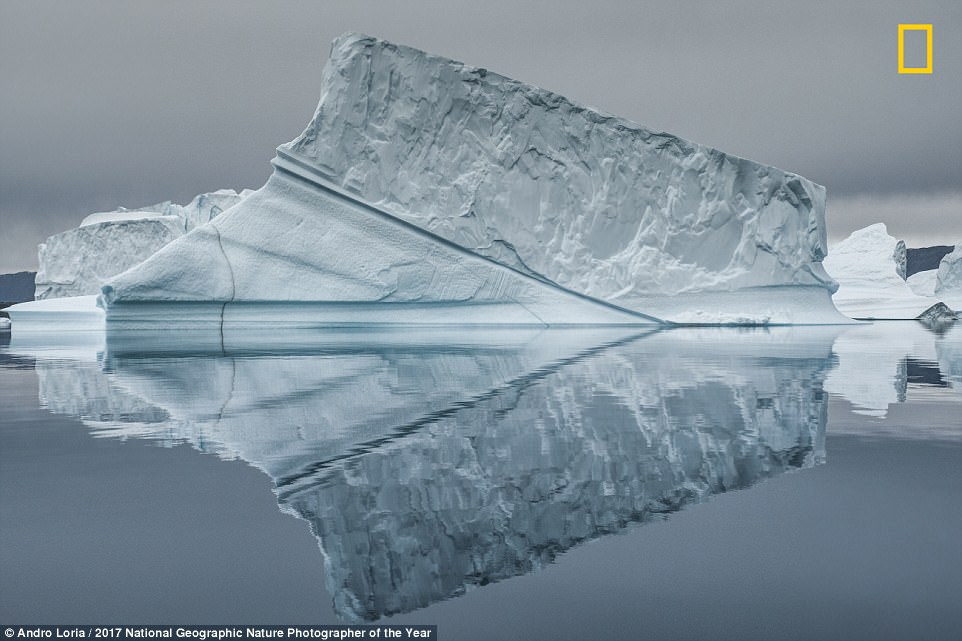 Now that’s cool: Taken in Greenland’s Scoresby Sound, this image captures the sheer grace of an Arctic iceberg floating by 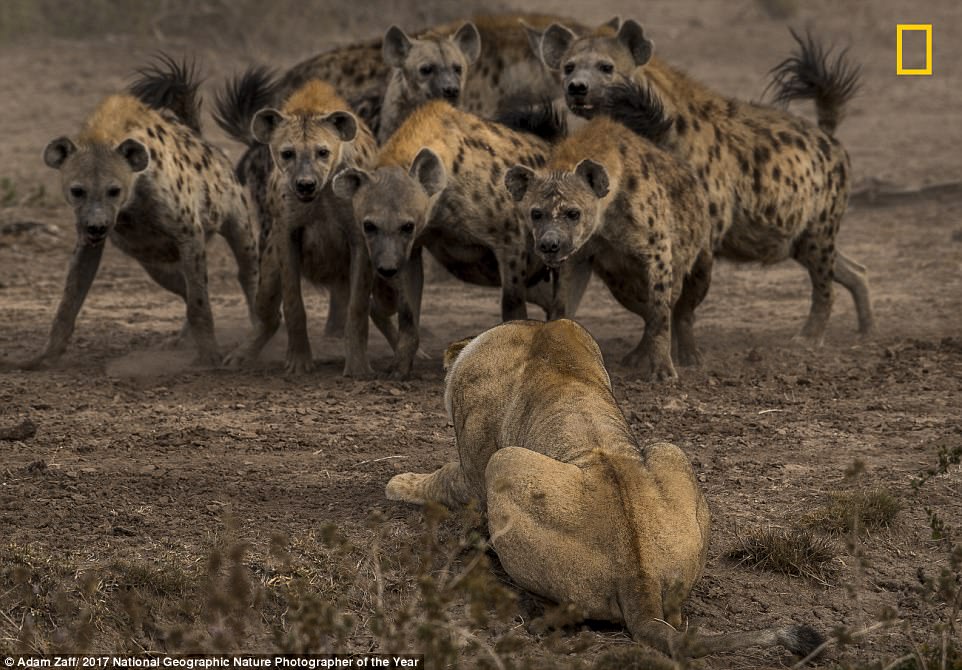 Stand-off: Taken in Kenya’s Amboseli National Park, this stunning image shows a group of hyenas take-on a lioness. Photographer Adam Zaff said: ‘A group of hyenas were the aggressors in attempting to take on two female lionesses, who they had sensed to be old or injured. The stand-off lasted about 30 minutes, but in the end the hyenas were no match for the two lionesses who were able to get away unscathed’ 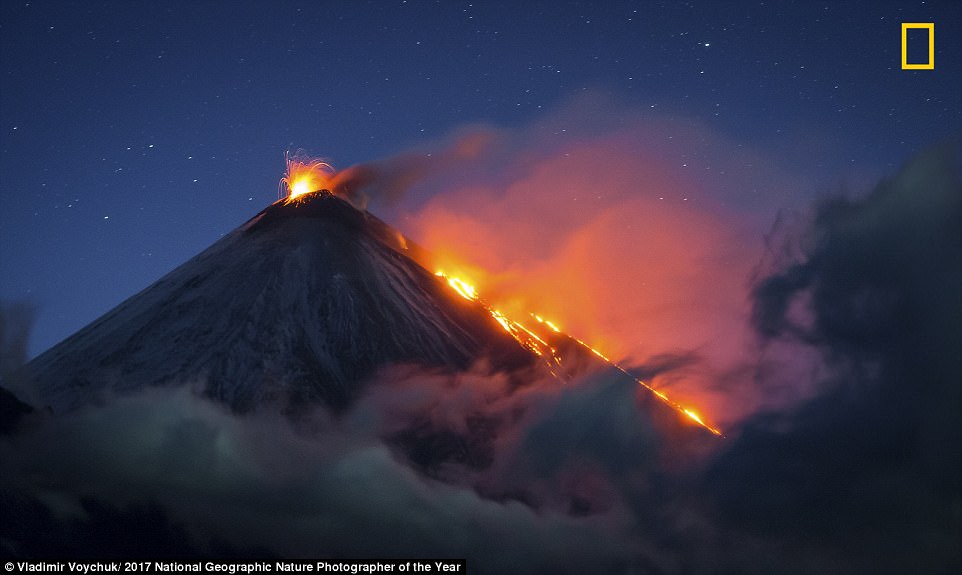 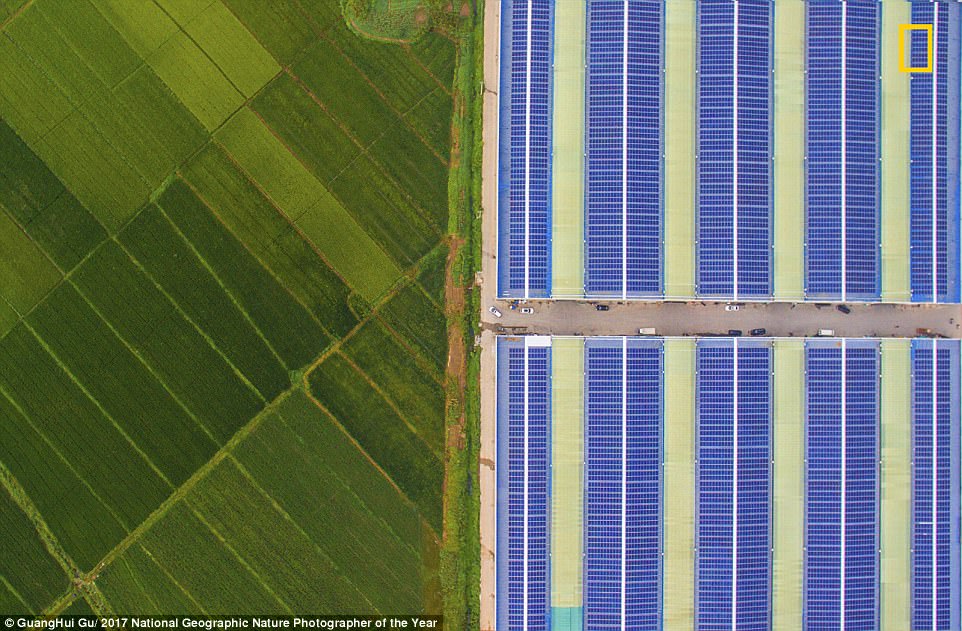 When nature meets man-made: The left half of this aerial image shows farmland, while the right side depicts a shopping mall 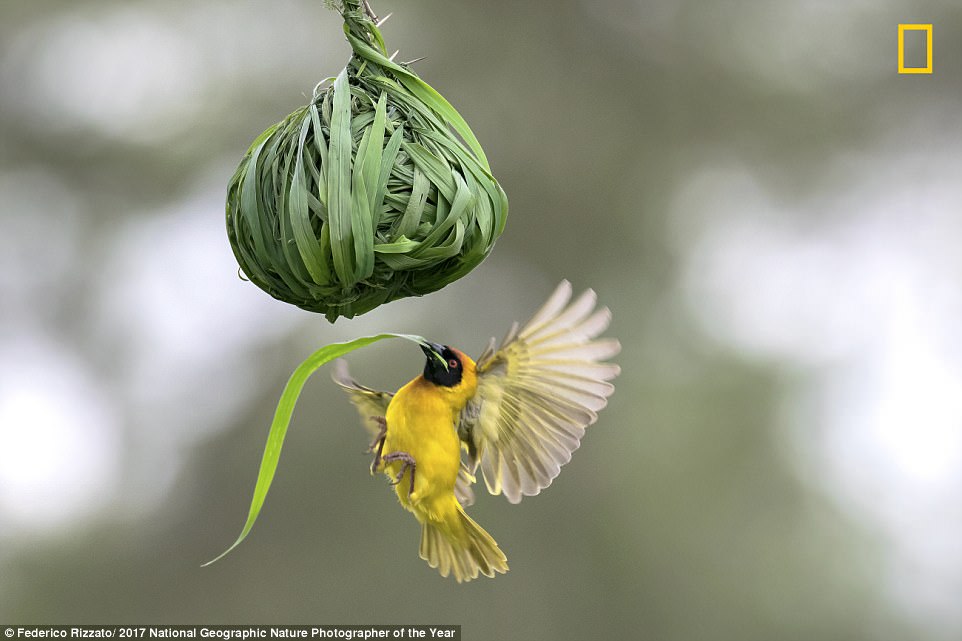 Work in progress: This perfectly-timed snapshot captures the moment a bright-yellow weaver bird adds a leaf to its nest. Photographer Federico Rizzato said that he waited hours for this moment 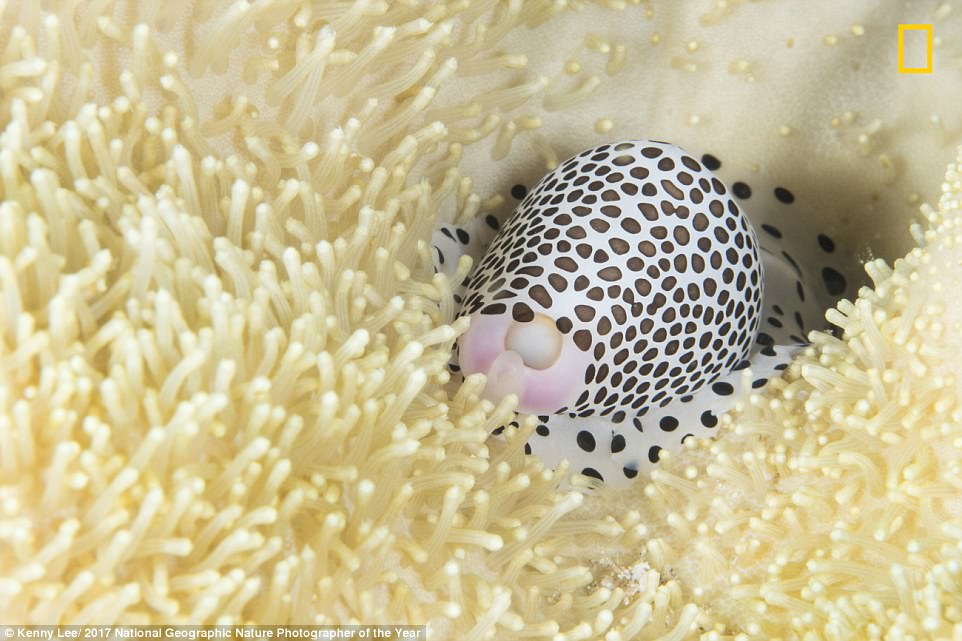 Natural wonder: Photographed in Pulau Weh, Indonesia, a cowry fish can be seen eating soft coral beneath the waves 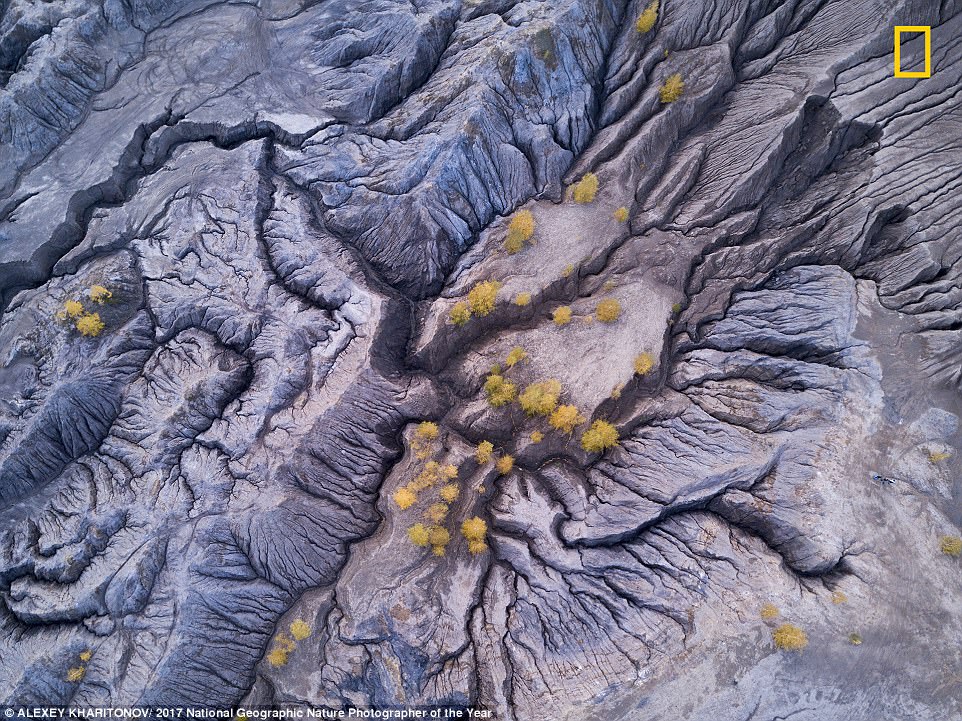 Nature always prevails: Clay heaps are beautified with birches and aspens in Russia’s Tula region, near Konduki village. These heaps, a legacy of the area’s mining industry, can reach 50 metres in height 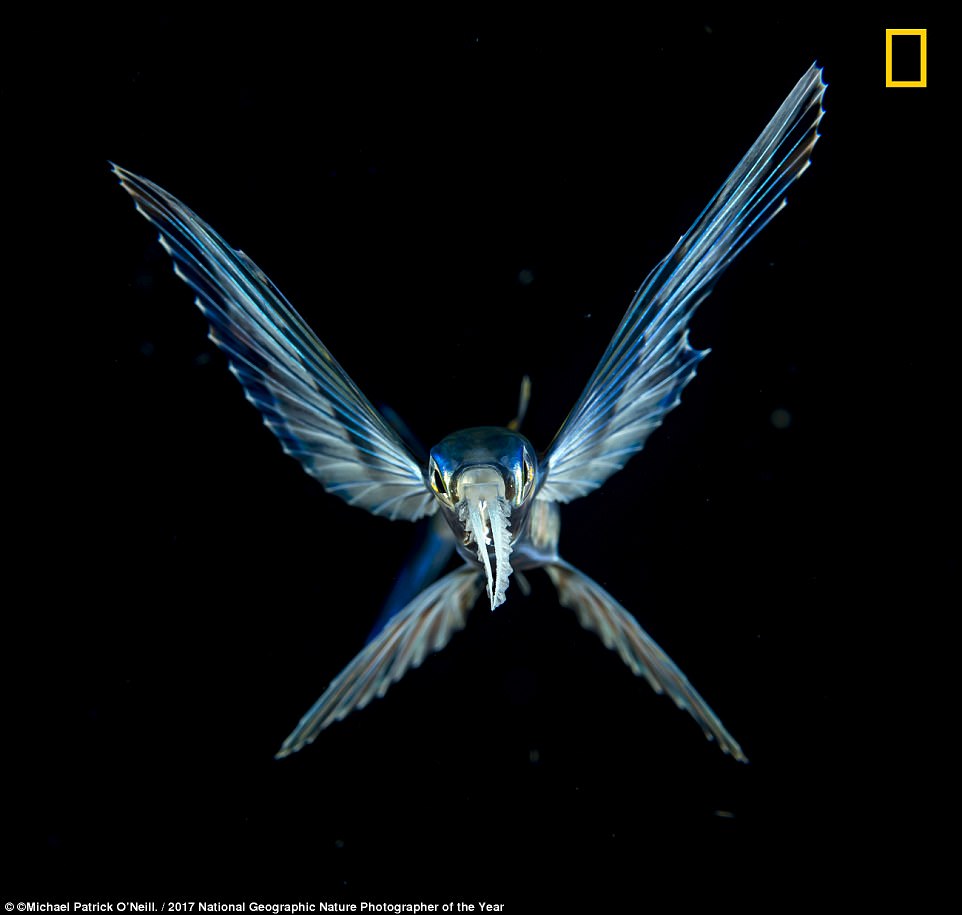 Ready for its close-up: A photogenic flying fish enjoys a nocturnal swim in the Gulf Stream off Palm Beach, Florida 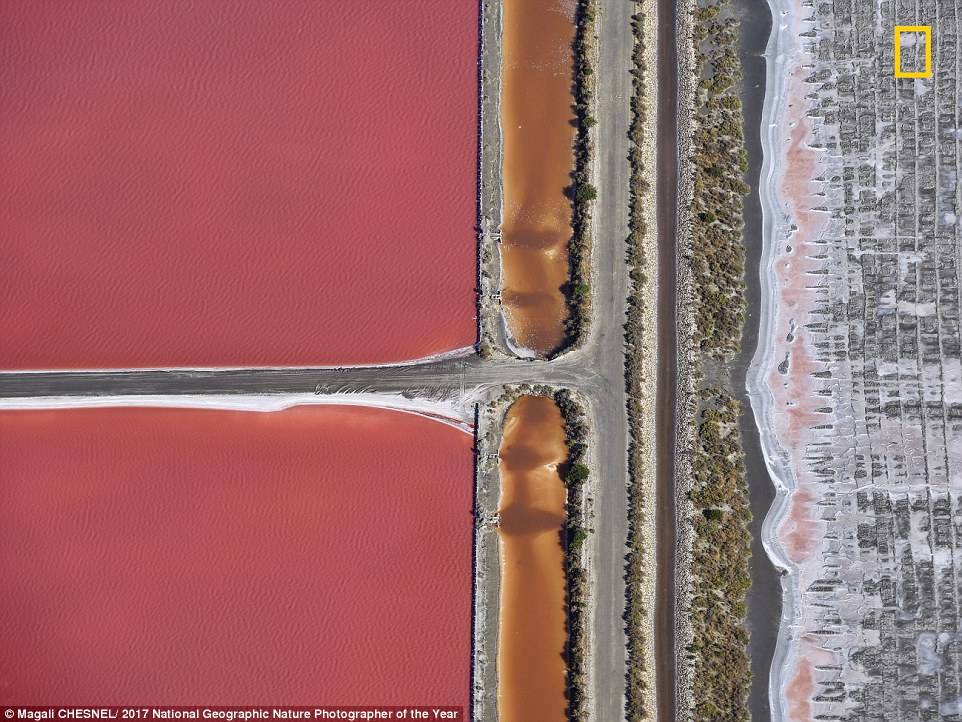 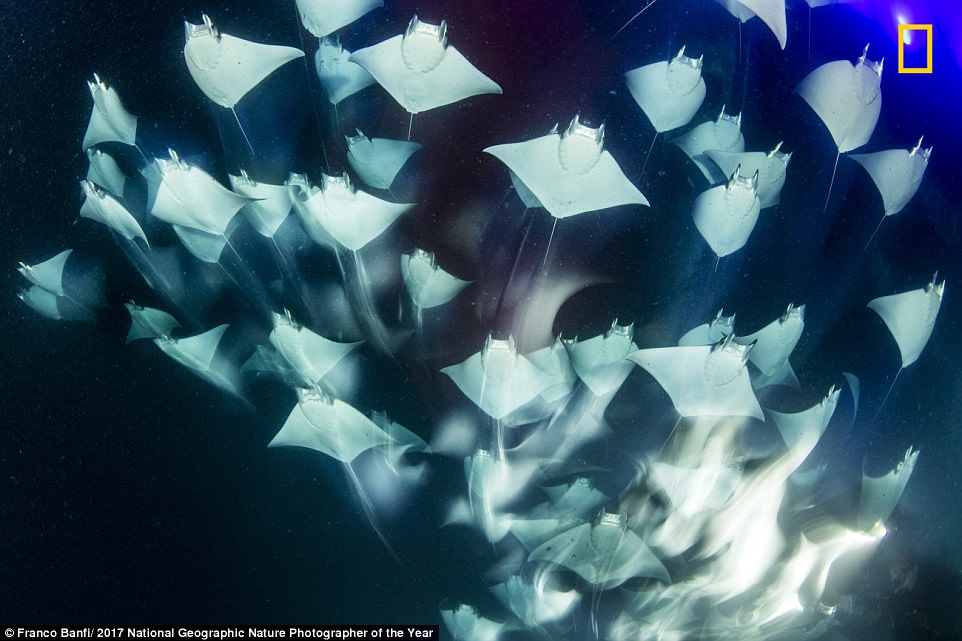 A school wrays, given an ethereal look by a long exposure photograph, feed on plankton at night 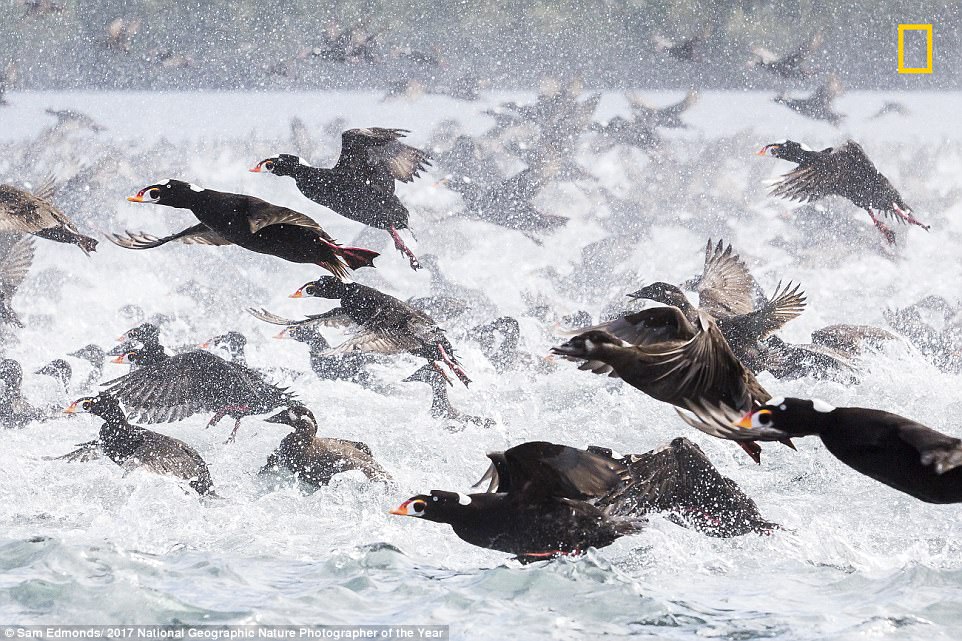 A raft of thousands of surf scoters takes flight from the water’s surface in The Great Bear Sea of British Columbia, Canada 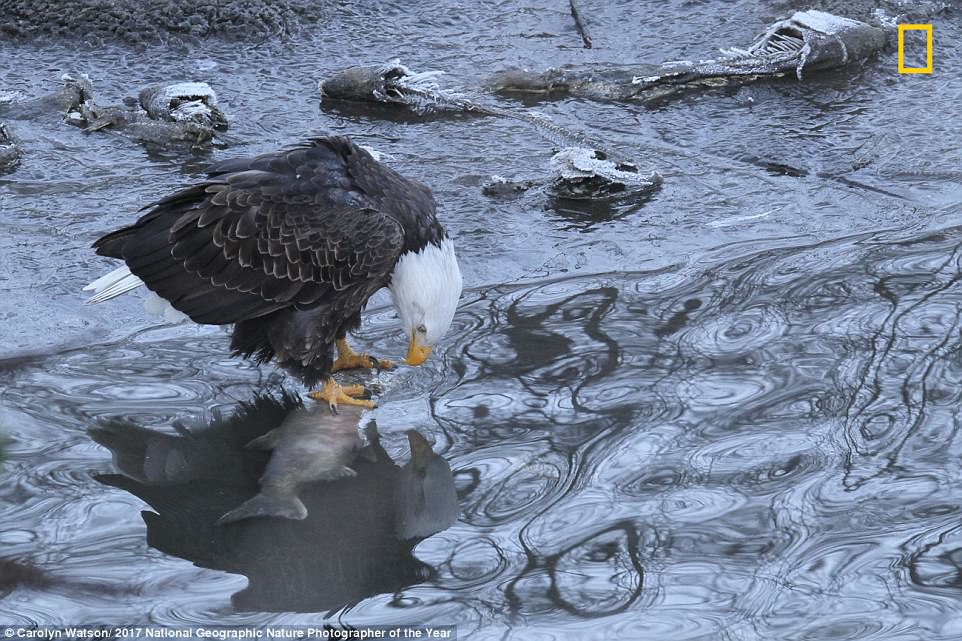 A young bald eagle tentatively feeds on a chum salmon carcass in the Nooksack River in Washington State. Hundreds of eagles come to feed on these inland waters every winter, coinciding with the annual run. According to the photographer, the eagle spent several minutes picking indecisively at the fish, often looking around to determine a clear path to fly out with the fish. Ultimately it opted to surrender the prize and fly back up to the cottonwoods reflected in the water. Soon a dozen seagulls would come and finish the meal 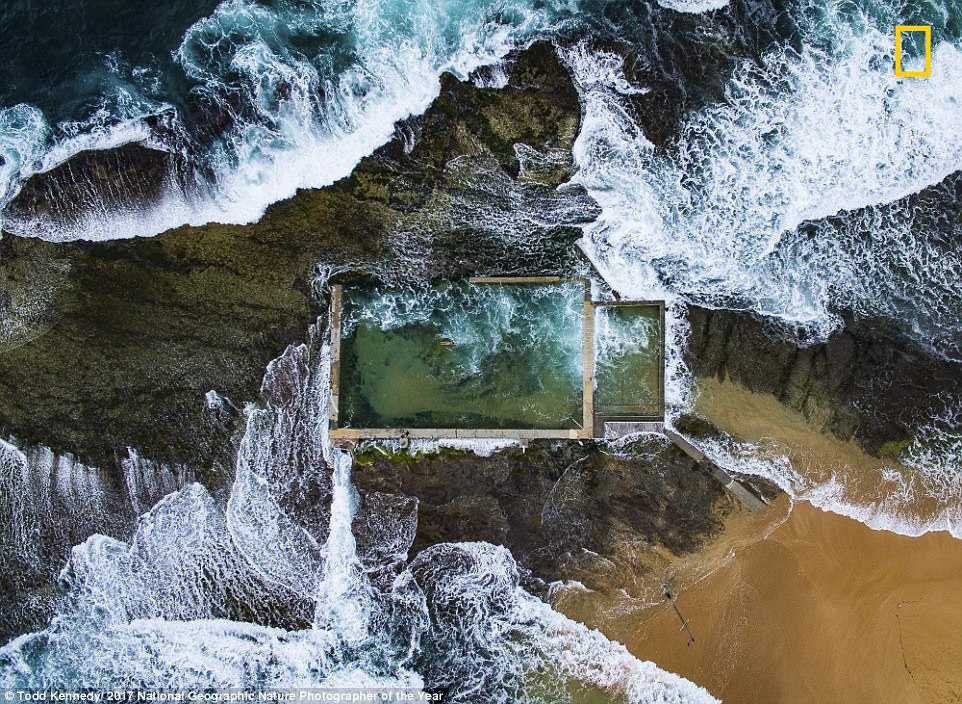 A rock pool in Sydney, Australia, at high tide. Waves crash over the edge, but a lone swimmer is undeterred