Supercheap Auto has been bombarded with hundreds of abusive comments and calls for a boycott from outraged Aussies after the retailer stood down a shop assistant who confronted an alleged thief.

Supercheap deleted hundreds of comments that flooded their Facebook page on Tuesday, which slammed the chain for standing down the employee.

Footage shows the worker had stopped a woman outside a Supercheap Auto store in Ashmore, on the Gold Coast, after she allegedly tried to flee with items stashed in the pram.

After an expletive-ridden showdown, the employee managed to recover some of the allegedly stolen goods before the woman allegedly fled the scene.

Supercheap said the worker was stood down pending an investigation, sparking fury as dozens of Aussies flocked online to criticise the decision and demand he be rewarded for his efforts.

‘Standing down a worker because he caught a shop lifter in the act and tried to stand up for your biz is just plain unaustralian! Hire him back!’ said one user.

‘Shame on you for sacking a worker that stopped a shop lifter and got your products back,’ commented another.

A third wrote, ‘Firing a guy for doing his job…yeah great work supercheap. 90% of your staff are nothing bit potato’s with no clue and when you do have a good staff member that does their job you fire them.’

‘Give that guy’s job back. What a hero. He did what anyone would do. He was not violent to her he [was] just looking after the company,’ a fourth person noted. 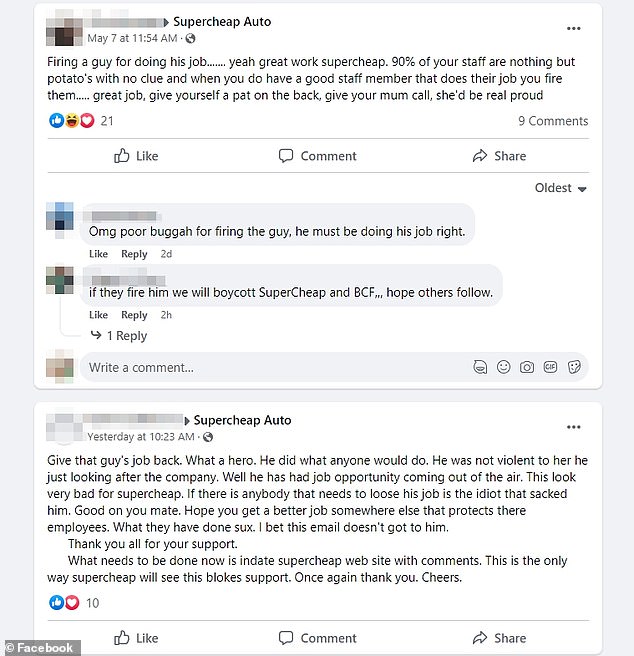 Several users on social media called for a boycott of Supercheap Auto and asserted they’d never shop at the retailer again.

‘No more shopping at Supercheap Auto for me. Seriously, you fire an employee for looking after YOUR business? Bad move…real bad move,’ one shopper said.

‘We need to boycott supercheap until the worker is reinstated,’ a man posted with a visual.

A third added: ‘Sad to see that the employee caught up in the shoplifting incident has been stood down from his job.’

‘The message seems to be that its ok to shoplift and you won’t get charged. I’ve lost faith in Supercheap Auto and will definitely shop elsewhere form now on.’

‘You guys should be ashamed of yourselves! No wonder criminals do what they do! Never shopping in your stores again!’ another remarked.

One person slammed the chain and stressed the employee should have been ‘rewarded’ as he was saving the retailer from ‘losing money’. 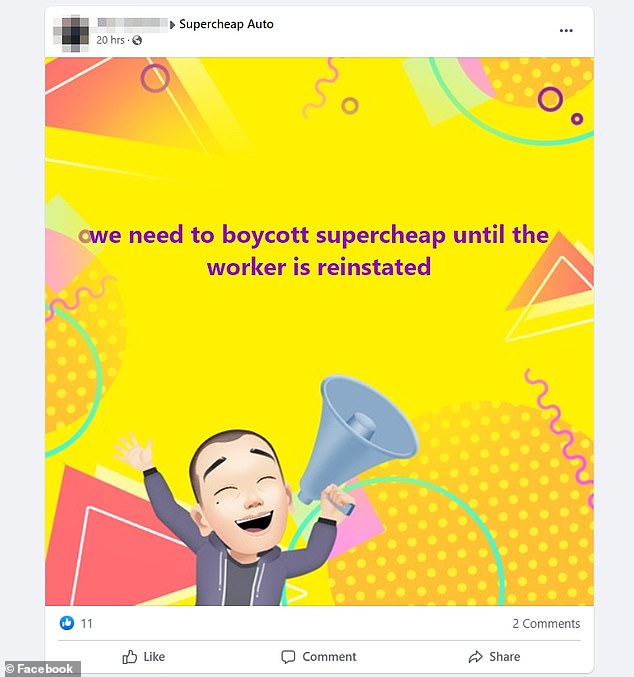 A few people said they they would be taking their business to Supercheap Auto’s competitor, Autobarn.

Others took a more lighthearted approach to the matter.

‘I heard a rumor Supercheap Auto is having a new type of sale?? Anything you can fit in a Pram with a blanket over the top is FREE,’ joked one .

Another user responded to a Supercheap Auto promotion with a picture of a kitted out vehicle, writing, ‘How big are these beasts? Do you think one would fit in a pram? I would love to get one for free!!!’

A fourth stated it was ‘clear’ Supercheap ‘condoned’ shoplifting and tried to enquire what store the worker was fired from so they could take items for ‘free’.

‘I just wanted to say thank you for firing the employee who confronted the shop lifter in Queensland,’ one person quipped.

‘As a thief myself it meals a lot to me to have your full support and knowledge that if I get caught you will fire the employee for confronting me.’ 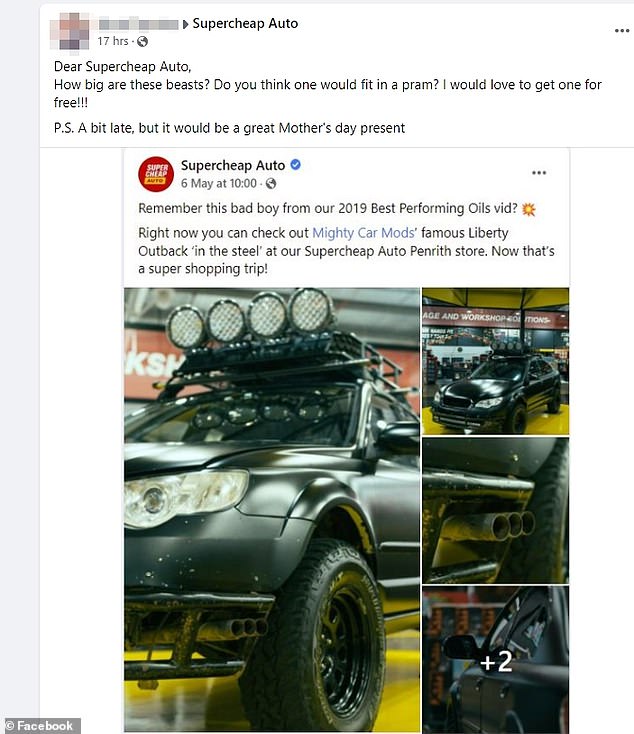 A few people said they they would be taking their business to Supercheap Auto’s competitor, Autobarn. Others took a more lighthearted approach to the matter

Since being stood down, the former Supercheap Auto shop assistant has had two local companies offer him a position after being impressed at how he handled the situation.

Autobarn, in nearby Burleigh Heads, has offered the man a position.

‘On behalf of our team in Burleigh, we would like to offer this man a job,’ the business wrote in an online post. ‘If anyone knows his name, please help us get in touch.’

The store’s owner, Michael Farrar, said his business has lost around $15,000 worth of goods over the past two years and the man in the video was the kind of employee he wanted on his team.

‘His actions showed to me that he is a loyal person and someone we would want on our team,’ he told the Gold Coast Bulletin.

It remains unclear whether the man has contacted the business to take up the offer. 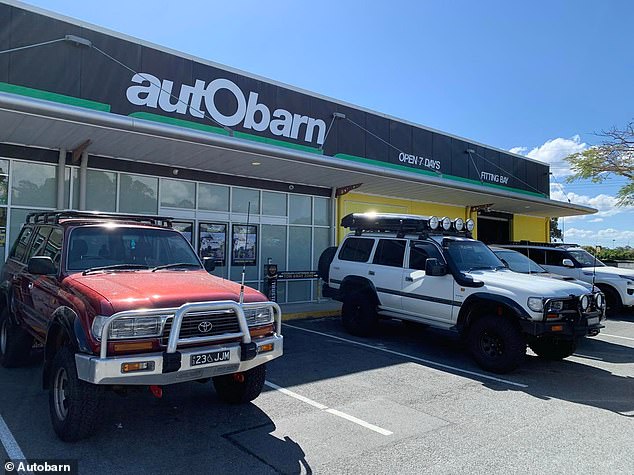 The man has been offered a position at Autobarn, in Burleigh Heads (pictured)

‘If anyone knows him tell him to DM us or tag him, we would like to interview him for a position should he require one!’ they wrote on Facebook.

‘After watching the video it’s crazy that supercheap have stood him down after the commitment to them he demonstrated!’

Supercheap Auto confirmed on Monday the employee had been stood down, telling Radio 2GB: ‘While the situation is being investigated, the employee will not be able to work’.