While the idea of a salad will get some people’s taste buds tingling, for others, the idea of chomping through a bowl of vegetables sounds more like a punishment.

If you can’t stand broccoli, celery or kale, you may be a ‘supertaster’, and a new study suggests it just might protect you from Covid-19.

Supertasters are people who are highly sensitive to bitterness due to a genetic mutation in the taste gene, T2R38.

If you can’t stand broccoli, celery or kale, you may be a ‘supertaster’, and a new study suggests it just might protect you from Covid-19 (stock image)

Are you a supertaster?

To find out if you’re a supertaster:

1. Darken your mouth by swirling around red wine

2. Take a piece of notepaper with punched holes in, which are around 6mm in diameter

3. Place these over your tongue and count the number of papillae – small fleshy projections – that pop through

4. If you have less than 15 you are a nontaster, if you have 15 to 30 papillae you are a taster and anything more than 30 means you are a supertaster

However, there are several variants of the gene, which can affect your sensitivity to bitter flavours.

For example, people who inherit two copies of a variant called AVI aren’t sensitive to bitter flavours, while those with one AVI variant and one PAV variant perceive bitter tastes.

And for people with two copies of the PAV variant, some foods taste extremely bitter.

The participants were tested for Covid-19, and the results showed that non-tasters were significantly more likely to get infected than supertasters.

This group was also more likely to have severe Covid-19 than either tasters or supertasters.

While the reason for this remains unclear, the researchers suggest that supertasters may produce more nitric oxide, which in turn damages any coronavirus particles.

In their study, published in JAMA Network Open, the researchers, led by Dr Henry Barham, explained: ‘When T2R38 is stimulated, it responds by producing nitric oxide to help kill or prevent further replication of viruses in the respiratory mucosa.’

The researchers hope their findings will encourage further research into the benefits of being a supertaster.

‘Further study evaluating the potential for phenotypic expression of T2R38 as a factor associated with disease on a larger scale is warranted,’ they added. 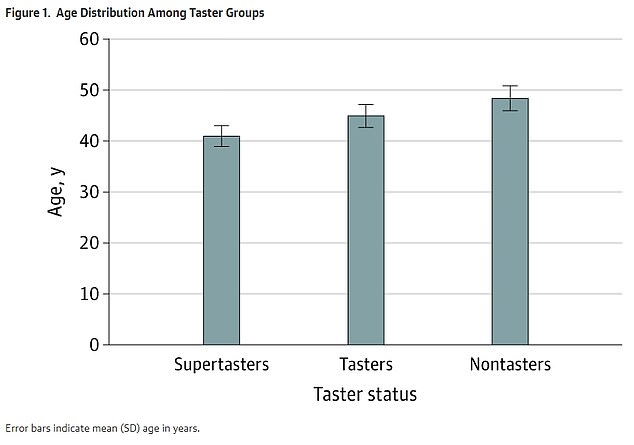 ‘This finding carries potential global implications for our understanding of SARS-CoV-2, in addition to yearly infections with additional viruses, including influenza.’

Less than one percent of humans are super supertasters, and they are mainly women that do not have European ancestry.