Support for the Conservative Party has sunk to its lowest level in six years – as pro-Brexit parties are seeing a surge in popularity, a new poll has revealed.

The Tories would only win 28 per cent of the vote if a general election were held tomorrow, with Labour earning 32 per cent of votes, according to a YouGov poll for The Times.

UKIP would take 6 per cent and Nigel Farage’s new Brexit Party would win 8 per cent of the vote, the poll claimed, making the combined weight of the staunchly pro-Leave parties the third largest political force in the country.

Though the generally pro-Remain Liberal Democrats would score 11 per cent, and Change UK, formerly known as the Independent Group, would win 3 per cent, the data revealed, meaning the Europhilic parties combined match the hardline Eurosceptics on 14%.

The Tories would only win 28 per cent of the vote if a general election were held tomorrow, with Labour earning 32 per cent of votes

Only two thirds of Conservative voters from the 2017 general election said they would support the party again, and a little more than one third said they would vote for the Tories in European elections.

As many as 56 per cent of people who voted to leave the EU in 2016 say they would vote for Ukip or the Brexit Party, with only 18 per cent saying they would back the Conservatives.

In a potential European Parliament election, Labour would lead with 24 per cent, followed by the Conservatives on 16 per cent, the Brexit party on 15, UKIP on 14, the Lib Dems and Greens scoring 8 per cent each, and Change UK on 7 per cent, the poll claimed.

The data for the poll was taken from 1,843 British adults.

The research comes amid reports of a potential Conservative leadership bid from Boris Johnson – who is said to be willing to pick Amber Rudd as his Chancellor.

The former foreign secretary was said to be ‘wooing’ Miss Rudd in order to appeal beyond the Eurosceptic wing of the Tories. 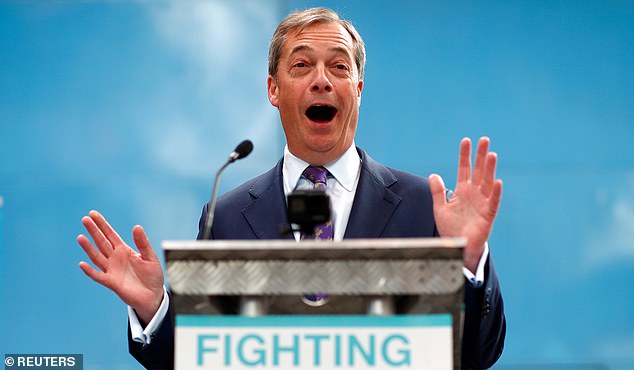 As many as 56 per cent of people who voted to leave the EU in 2016 say they would vote for Ukip or the Brexit Party, with only 18 per cent saying they would back the Conservatives

But Work and Pensions Secretary Miss Rudd has said she cannot support Mr Johnson while he keeps the door open to a No Deal Brexit, according to reports.

The two newest forces in the data are the Independent Group, who want to campaign on a platform of seeking another referendum with the option to remain – and the Brexit Party, whose front-man Nigel Farage yesterday declared: ‘We cannot have a second referendum until we’ve implemented the first!’

Mr Farage’s party was predicted to score more than double Change UK in both a general election and European elections.

Yesterday he announced Jacob Rees-Mogg’s sister Annunziata as his first star MEP candidate – after she quit the Tories after 35 years.

Mr Farage vowed to take votes from the ‘tarnished’ party he left in December and started a new war of words with successor Gerard Batten by claiming he lacks ‘good people’ and has allowed a ‘take over’ by the far right.