Police in Madrid restrained members of the feminist movement Femen who had slogans like, ‘To fascism neither honour nor glory,’ painted on their bare chests.

The women could be seen shrieking in fury as officers grappled with them on the streets of the Spanish capital while Franco’s fans draped themselves in the country’s flag.

The clashes come just weeks after Franco’s remains were exhumed from the controversial Valley of the Fallen mausoleum where supporters were seeing throwing Nazi salutes as his coffin was carried out.

‘To fascism neither honour nor glory’: A topless woman from the feminist action group Femen stands before a police officer in Madrid today as she demonstrates against the supporters of General Francisco Franco 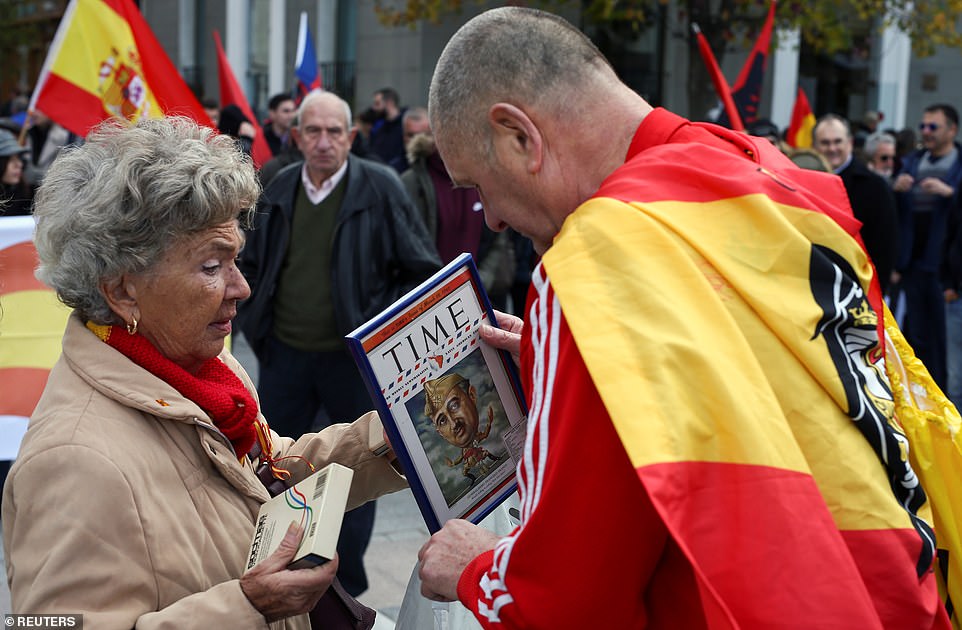 Supporters of former Spanish dictator Francisco Franco are pictured during a demonstration against his exhumation at the annual gathering held on the week of the 44th anniversary of the dictator’s death, in Madrid 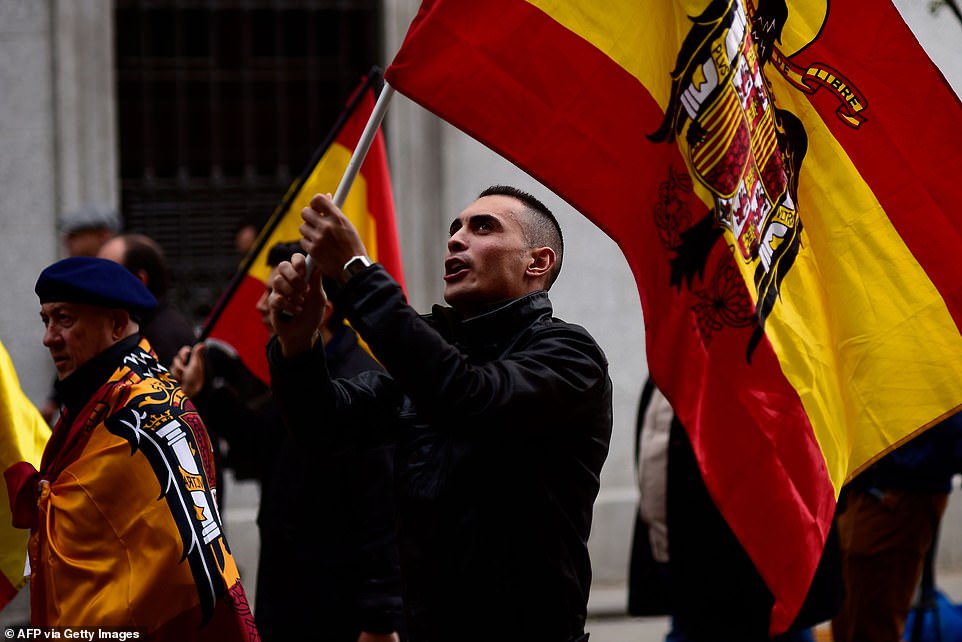 A man waves a Spanish fags sporting the eagle of Saint John’s coat of arms, during a far right demonstration marking the anniversary of the death of Spanish late dictator Francisco Franco

On October 24, his body was removed from the grand mausoleum he had built as his final resting place so it could be moved to a discreet family crypt. 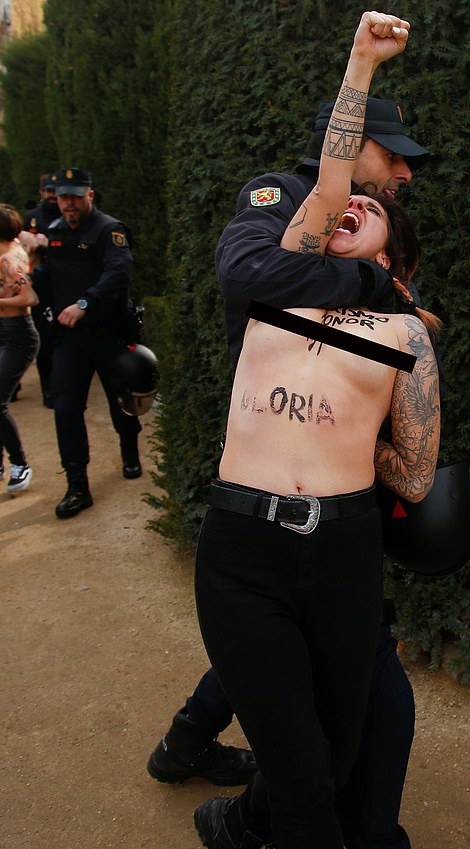 Descendants of the late strongman leader – who had bitterly opposed the exhumation – gathered at the Basilica of the Valley of the Fallen in in San Lorenzo del Escorial, near Madrid, around 11am as his remains were exhumed.

They then helped to carry his coffin, covered in brown silk and draped with a flag bearing the standard of Francisco Franco, to a waiting hearse.

From there it was transported to a helicopter, which then flew the body to Mingorrubio where it was be reburied in a family plot alongside his wife.

They shouted insults against interim Socialist Prime Minister Pedro Sanchez, who made relocating the remains a priority when he took government, as the helicopter carrying Franco arrived.

Franco, who died in 1975, ruled Spain with an iron fist after his Nationalists won the bloody civil war of 1936-39 which he started.

His authoritarian rule left Spain largely isolated from Europe and many saw the monument as an affront to the hundreds of thousands of people who died during the war.

Current Socialist PM Pedro Sanchez made the exhumation a priority since coming to power in June 2018, saying Spain should not continue to ‘glorify’ the former dictator.

‘It is a great victory for dignity, memory, justice and reparation – and thus for Spanish democracy,’ Sanchez said of the historic moment. 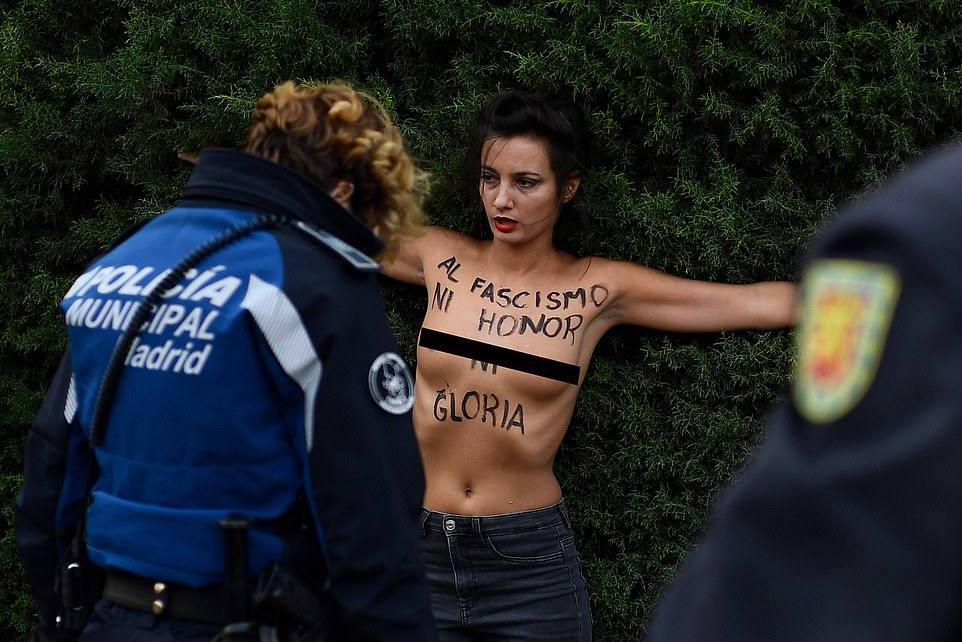 Earlier this month Spanish authorities said they would attempt to exhume thousands of people who had been buried at the mausoleum.

Spain’s National Patrimony Authority said Wednesday that it had told 31 families who had requested the exhumation of their loved ones that it would proceed to open the crypts where they are believed to be held to examine their condition.

The bodies are among the 34,000 victims of the 1936-39 Spanish Civil War which were buried on the site of the Valley of the Fallen mausoleum. 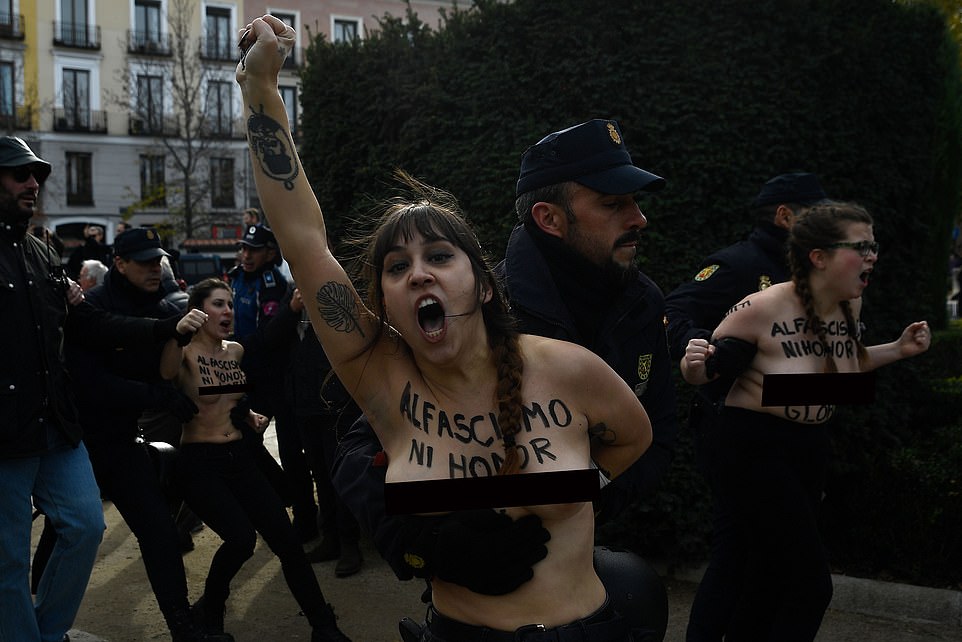 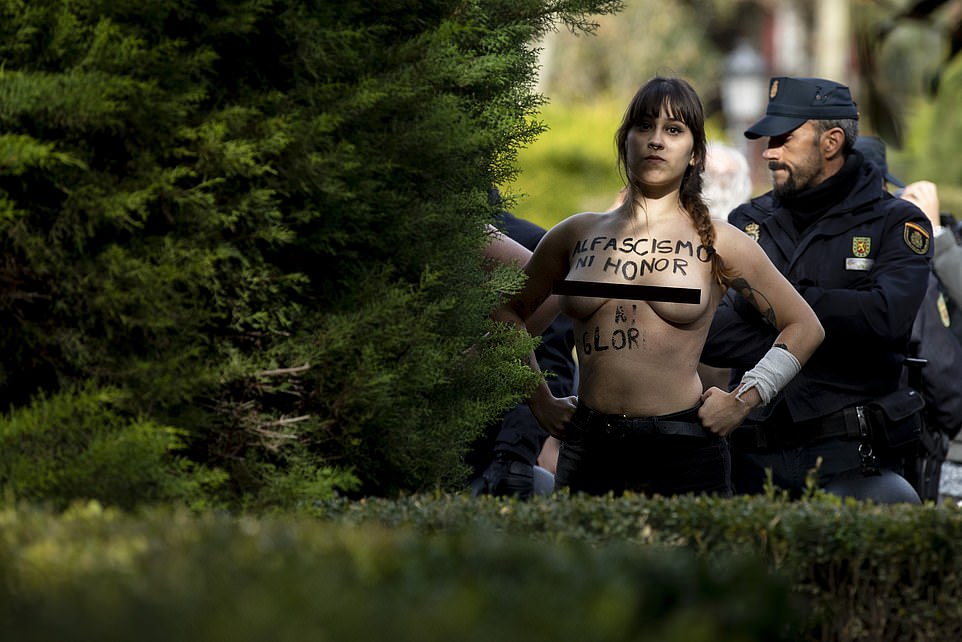 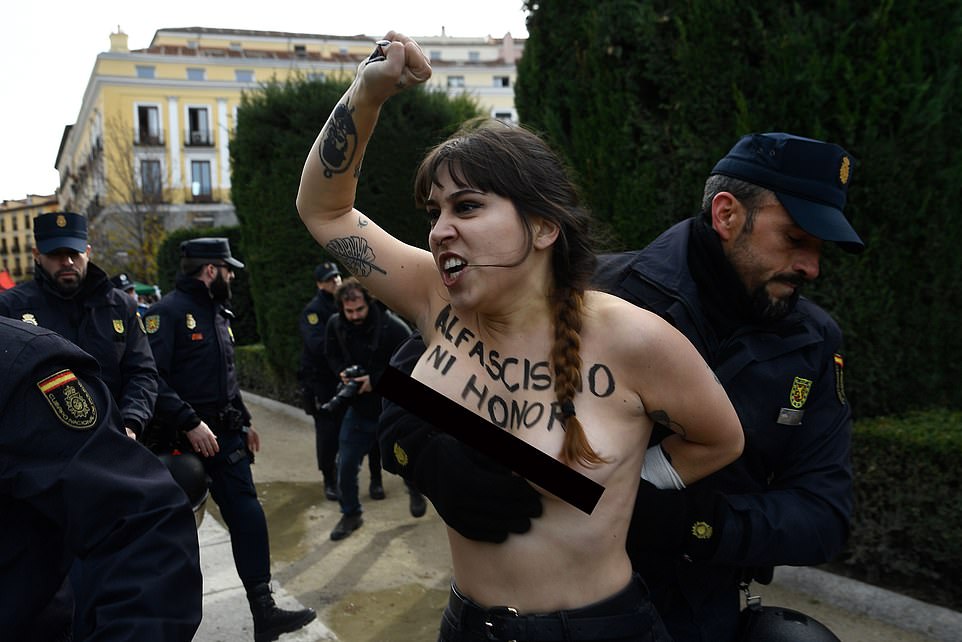 The antagonism between the two sides remained during the transition to democracy in the 1970s, resulting in deep divisions between right and left.

‘A public tribute to a dictator was more than an anachronism it was an affront to our democracy,’ Sanchez said.

‘Ending it was an obligation for the generations that did not grow up with the trauma of the Civil War and dictatorship.’

His critics have accused him of electioneering, with the closed-door operation beginning today just over a fortnight before Spain goes to the polls.

Who was Francisco Franco? Spain’s former dictator known as ‘El Caudillo’ who ruled with an iron fist 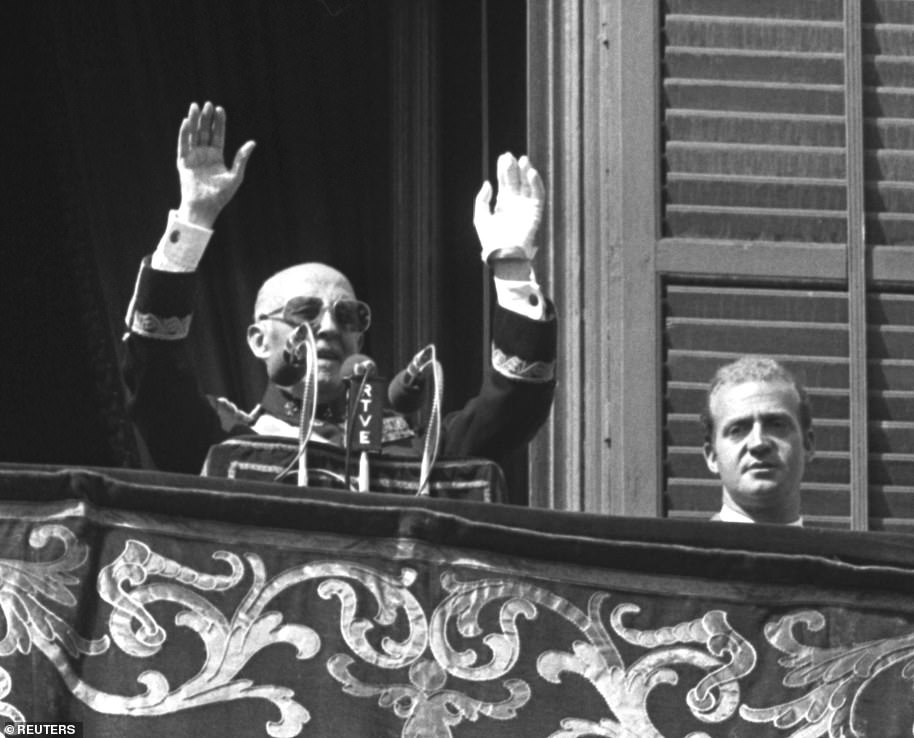 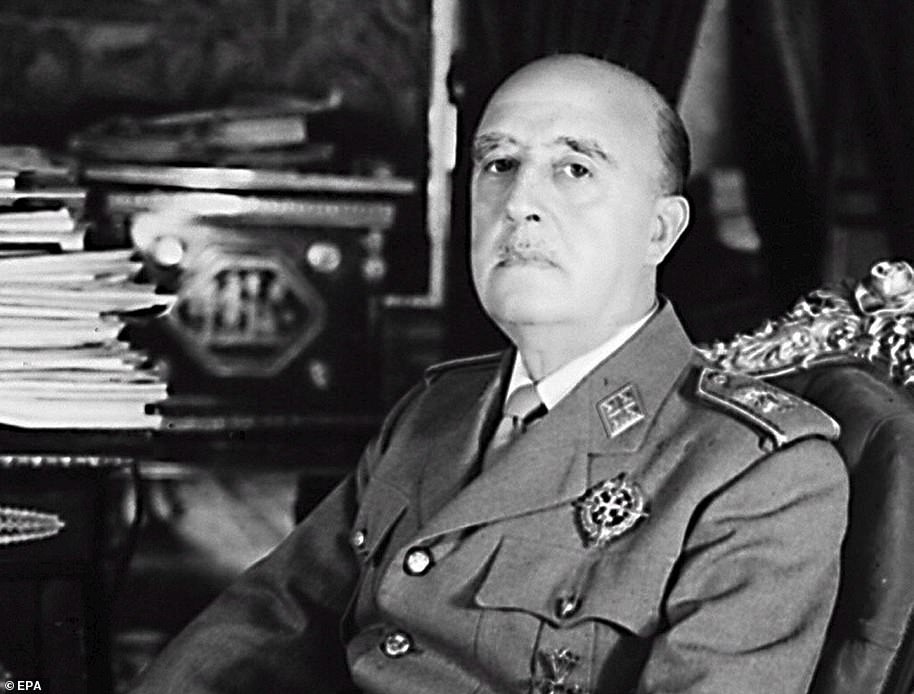 Franco, who died in 1975, ruled Spain with an iron fist after his Nationalists won the bloody civil war of 1936-39