With the justice holding the decisive vote remaining silent, a divided Supreme Court sparred Monday over a case that could undermine the financial footing of labor unions that represent government workers.

The justices heard arguments in a challenge to an Illinois law that allows unions representing government employees to collect fees from workers who choose not to join.

That money gives public-sector unions the political muscle to endorse candidates and run campaign ads – effectively giving them the ability to lobby the public for leaders who will increase their pay.

Many government employees who choose not to join these unions say they shouldn’t be forced to financially support politicians they oppose.

Amid colorful, sometimes angry comments from his colleagues, Justice Neil Gorsuch asked no questions during the hourlong session on Monday.

The Supreme Court took up a challenge Monday in a case that could deal a painful financial blow to organized labor, particularly government unions 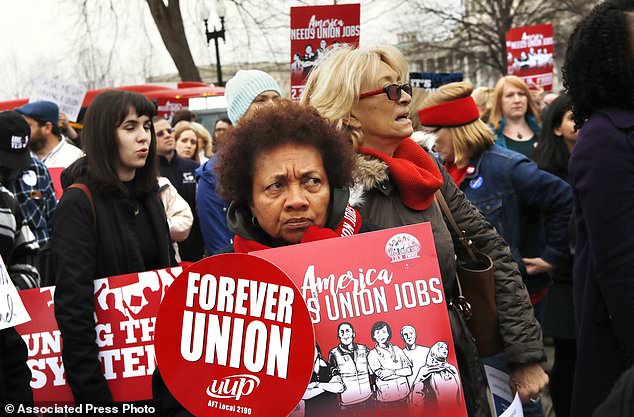 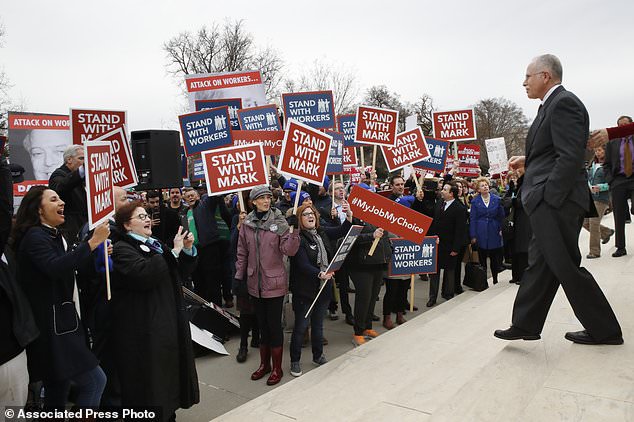 Supporters of Illinois government employee Mark Janus cheered as he walked to thank them on Monday outside the Supreme Court; he is the worker who challenged the Illinois law that allows unions to charge non-members for the benefits of collective bargaining

The court split 4-4 the last time it considered the issue in 2016 following the death of Justice Antonin Scalia.

Gorsuch joined the court in April and has yet to weigh in on union fees, but conservatives hope his swing vote will land on the anti-union side of the debate.

The unions say the outcome could affect more than 5 million government workers in 24 states and the District of Columbia.

In many respects, Monday’s arguments were a replay of what happened in 2016, when the court took up so-called ‘fair share’ fees and appeared to be ready to overrule a 1997 high court decision that serves as their legal foundation.

But Justice Scalia’s death just over two years ago left the court tied, leaving a lower court ruling in favor of the fees in place.

‘You’re basically arguing, do away with unions,’ Justice Sonia Sotomayor told William Messenger, a lawyer with the National Right to Work Legal Foundation. The group is representing Illinois worker Mark Janus in his Supreme Court challenge.

On the other side, Justice Anthony Kennedy, who has voted against unions in past related cases, scoffed at labor’s argument that there is a difference between collective bargaining over government employees’ pay and benefits, and unions’ political activities, which nonmembers do not have to support.

Janus says he has a constitutional right not to contribute anything to a union with which he disagrees. Janus and the conservative interests that back him contend that everything unions representing public employees do is political, including contract negotiations. George Emilio Sanchez, center, and Angela Dunn, right, both with the Professional Staff Congress for the City University of New York (CUNY), rallied in support of unions outside of the Supreme Court

‘Isn’t that the end of this case?’ Kennedy replied. 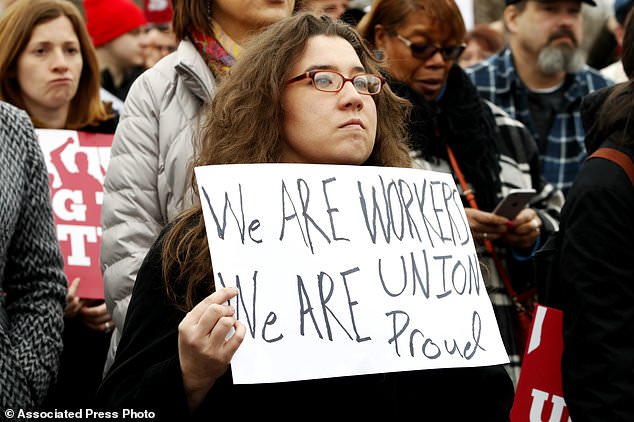 Merci Decker, with the United University Professions union was among the protesters who traveled to Washington to make their voices heard

The Trump administration is supporting Janus in his effort to persuade the court to overturn its 1977 ruling allowing states to require fair share fees for government employees.

The unions argue that so-called fair share fees pay for collective bargaining and other work the union does on behalf of all employees, not just its members. More than half the states already have right-to-work laws banning mandatory fees, but most members of public-employee unions are concentrated in states that don’t, including California, New York, and Illinois.

Labor leaders fear that not only would workers who don’t belong to a union stop paying fees, but that some union members might decide to stop paying dues if they could in essence get the union’s representation for free.

Justice Ruth Bader Ginsburg suggested it would be natural for union members to say ‘I would rather keep the money in my own pocket,’ potentially seriously cutting union revenues.