Suranne Jones had one aim when she signed up to star in Sky Max’s Christmas Carole, a fun family movie that’s a modern take on the Dickens classic: she was desperate to appear in something her son could watch.

‘None of the roles I’ve done really – even Doctor Who, because that can be quite scary – are appropriate for my six-year-old,’ explains Suranne, 44, who’s never divulged the name of the son she has with husband Laurence Akers, a journalist and scriptwriter.

‘I do show him bits of things. So with Gentleman Jack I’ll say, “Oh, this is Mummy and Mummy’s wife,” and then I’ll show him a bit of Vigil and say, “Mummy’s being lowered onto a submarine.”

‘But he’s at a great age for Christmas Carole now and I wanted to make something for him. To have a whole show that he can sit down and watch with me and his dad and the dogs, it’s going to be fun.’

Suranne Jones is starring in Sky Max’s Christmas Carole, a modern take on the Dickens classic, as she wanted to appear in something her son could watch

Written by Anil Gupta and Richard Pinto, the co-writers of Citizen Khan, Christmas Carole is a funny, family-friendly adventure. Set in the present day, it centres on Suranne’s icy businesswoman Carole, who’s made a fortune producing cheap Christmas craft materials.

But Carole is shockingly mean-spirited – she hates Christmas, has cut off her dad Leon (Mark Benton) and fires her assistant Bobbie Cratchit-Singh (Taj Atwal) for refusing to work late on Christmas Eve.

Her manner is as blunt as her haircut is razorsharp. When her hardworking staff produce a charming Christmas television advert, Carole snaps, ‘If I wanted sickly-sweet sentimental garbage, I’d have got John Lewis to make it.’

However, Carole sees the light after being taken on an odyssey to meet the Ghosts of Christmas Past, Present and Yet To Come. Representing the past are Morecambe and Wise (played by Eric and Ernie impersonators Jonty Stephens and Ian Ashpitel), who rope her into a dance with echoes of Angela Rippon’s performance in their 1976 Christmas Special. 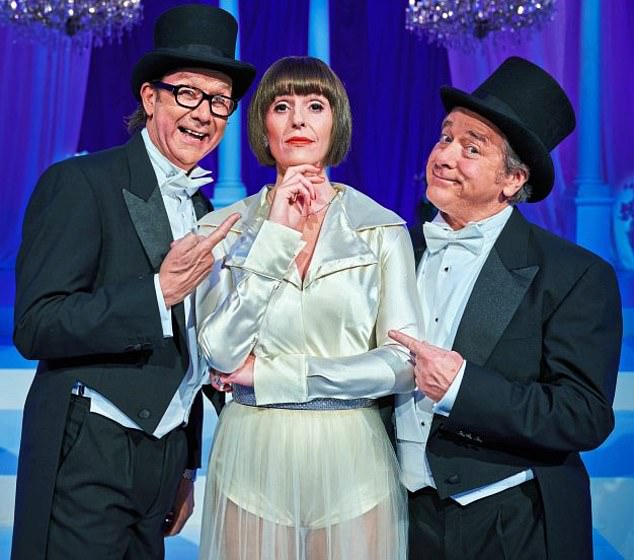 Representing the past are Morecambe and Wise (played by Eric and Ernie impersonators Jonty Stephens and Ian Ashpitel), who rope her into a dance with echoes of Angela Rippon’s performance in their 1976 Christmas Special

Although Suranne was born two years after that iconic TV moment, as a big Morecambe and Wise fan she knew it well. ‘I took my husband to see Jonty and Ian in 2016 because he’s a huge fan of Morecambe and Wise,’ she says.

And Suranne’s husband was eager to see her perform with the impersonators.

‘Laurence came to watch when we filmed it and I think everyone was quite excited for it to work. It’s such an iconic piece of television, it was a privilege to do.’

A couple of surprising choices turn up as the Ghosts of Christmas Present and Yet To Come, with comedians Jo Brand and Nish Kumar both playing themselves and bringing a bit of levity.

‘Jo’s a national treasure, but Carole isn’t impressed it’s her, and Jo isn’t impressed that she has to be a spirit, so that was a fun scene,’ says Suranne. ‘And as for Nish, I don’t think we’ve seen a ghost in a hoodie before.

‘And it’s great because Carole doesn’t really know who Nish is, so he has to explain it to her.’

Unlike Carole, it seems Suranne is anything but a Scrooge – she adores Christmas and even gets her family to wear matching festive pyjamas. ‘My husband used to hate it, but I think he loves it more than me now,’ she chuckles.

‘Our Christmas tree has baubles from all over the world. Wherever we go we try to pick up a Christmas decoration, so our tree is pretty eclectic.’

Her Christmas involves long drives from the family home in north London’s leafy Muswell Hill. ‘We usually have three Christmases. One with my family in Manchester, then we’ll go to Kent to see Laurence’s family, then we’ll do our own thing so my boy can open his presents and play with them, because at six that’s what you want to do.

Playing the anti-hero in Christmas Carole gives Suranne a chance to show off her comedy skills after years of making top-notch dramas such as Gentleman Jack, Vigil and Doctor Foster, which won her a Best Actress BAFTA in 2016. And the fact that it’s a Christmas film is a huge bonus.

‘I will literally watch any Christmas film,’ Suranne says. ‘I’d never done a Christmas film and I’d always wanted to tick that off as an actor, so this was a bit of a no-brainer.’

William and Kate put on a display of palace perfection with sunny Christmas card featuring George, Charlotte and Louis… while Harry ‘mulls interview offers from US TV to plug his memoir that would see him spilling royal bombshells into the New Year’

The great Christmas comeback! Why stars of the 90s and noughties are signing up for cheesy made-for-TV festive films to revamp their careers – from Lindsay Lohan to Freddie Prinze Jr.

What makes a feel-good Christmas film good? Scientists reveal how Love Actually, The Holiday and Home Alone all strike the right mix of humour, plot emotion and happy ending