Surgeons are helping to perform multiple operations at the same time under a controversial policy aimed at combating record NHS waiting lists.

It allows them to focus on the critical parts of the procedure and reduces the time they waste waiting for anaesthetists and other staff to prepare and sedate patients.

The process has been heralded as an ‘innovative’ way to tackle record NHS waiting lists of 6.8million, which have soared during the pandemic.

But a study warns it may pose a risk to patient safety and reveals the practice has resulted in multimillion-pound payouts in the United States.

Guy’s and St Thomas’ NHS Foundation Trust, in London, is testing a version of overlapping surgery known as high intensity theatre – or HIT lists. It says the approach is a ‘super-efficient but safe programme to maximise the number of patients treated in one day’.

The trust website adds: ‘Using two theatres and three teams, the surgeon can go between cases without having to wait for the patient.’ The trust runs the HIT lists at weekends and focuses on one type of procedure, allowing it to typically treat three times more patients than usual. Researchers from Oxford University Hospitals found there is some potential benefit to overlapping surgery where turnover times between cases are long, operations are two hours or less and where ‘critical portions’ of surgery constitute about half of the total operation time.

However, they warn any advantages must be balanced against safety, ethical and training concerns. And, while the senior surgeon may reduce down time, it could leave all other staff waiting longer for them to arrive, they add. They say in the journal Anaesthesia: ‘An overlapping scheduling policy… may be considered by NHS hospitals, with several now trialling versions as high-intensity theatre operating lists.’ 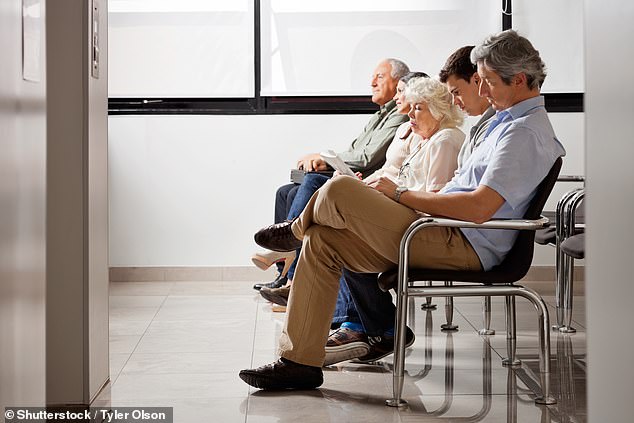 The process has been heralded as an ‘innovative’ way to tackle record NHS waiting lists of 6.8million, which have soared during the pandemic

The authors, led by consultant anaesthetist Professor Jaideep Pandit, note there have been examples of disastrous rollouts of overlapping surgery in the US.

A driver for the lawsuits has been the lack of proper consent, as patients and insurers did not know the senior surgeon would not be present throughout.

The researchers conclude: ‘Ultimately, any perceived benefits of introducing overlapping surgery should be balanced against the perhaps small, but very real risks it can present to patient outcomes, safety, training and patient autonomy.’

The Royal College of Surgeons of England said: ‘All practices should put patient safety first.’