Surgeons in India have removed a kidney weighing as much as two newborn babies – thought to be the largest on record.

Medics at the Sir Ganga Ram Hospital in New Delhi spent two hours extracting the 16.3lbs (7.4kg) organ, which had occupied almost the entire abdomen of the patient.

Normally a healthy kidney weighs between 125g and 170g in men – less than half a pound.

The 56-year-old patient was suffering from a genetic disorder called autosomal dominant polycystic kidney disease (ADPKD), which left his organ covered in cysts.

A patient had his 7.4kg (16.3lbs) kidney removed after it became swollen and covered in cysts as the result of autosomal dominant polycystic kidney disease (ADPKD) 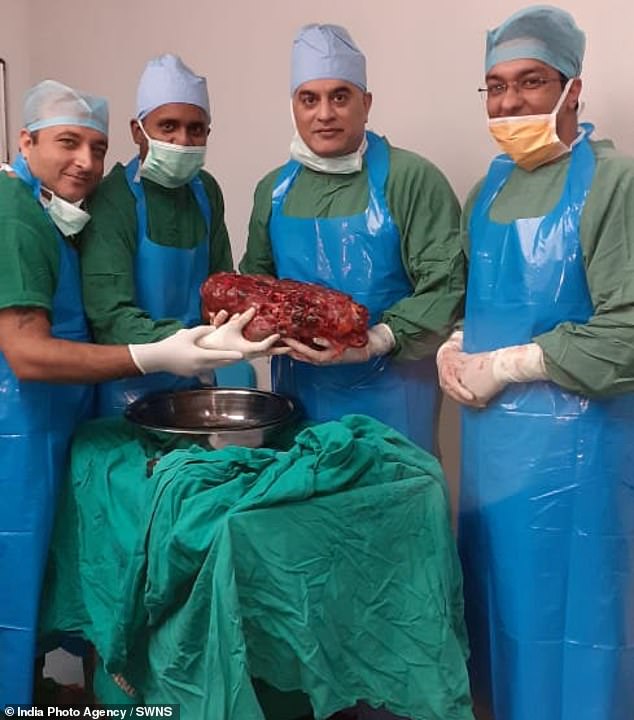 The condition sees fluid-filled cysts develop in both kidneys, causing them to swell up. It can lead to complete failure of the organ.

Dr Sachin Kathuria, a consultant urologist, said: ‘The removed kidney was 32×21.8 cm in size, which makes it the largest kidney removed till date globally.’

‘Although the pre-operative scans showed a huge kidney, we did not expect that it would be the heaviest.’

The kidney was heavier than the current Guinness Book of World Records holder, which weighed 9.3lbs (4.25kg) when it was removed from a man in Dubai in 2017.

His surgeons said, however, that they had seen evidence of heavier ones in the past in medical journals – but they claimed this one was the largest in size.

Medics said the patient was in excruciating pain, suffering from breathlessness and had internal bleeding which risked infection.

Dr Kathuria said: ‘We investigated and found that the patient had internal bleeding and infection within the cysts of his left kidney. It was at this point that we decided to take him up for surgery.’

The decision to remove the kidney was taken as he did not respond to intravenous antibiotics. 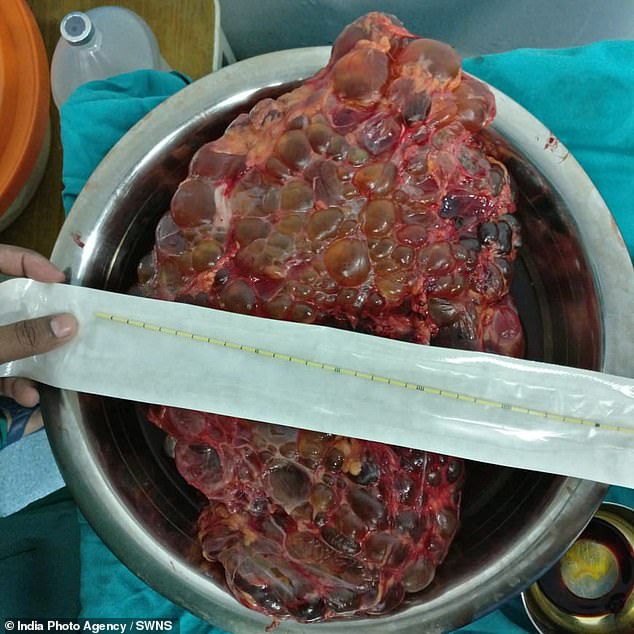 ADPKD is a condition in which fluid-filled cysts develop in both kidneys causing them to swell up, leading to complete failure of the organ

He was given a kidney transplant and discharged this month.  The patient is currently on dialysis – a procedure to remove waste products from the blood when the kidneys stop working properly.

ADPKD affects between one in 1,000 individuals worldwide each year and is currently incurable. There are around 60,000 with the condition in Britain.

It is caused by mutations in one or more genes, causing them to function abnormally. Cysts develop in the kidneys, and often the livers and the pancreas.

Over time, they grow and multiply, replacing normal healthy tissue and causing the kidneys to stop working.

In the early stages, there may be no symptoms and the cysts won’t be noticed until adulthood.

They will vary by individual but may include back or abdominal pain, recurrent urinary infections or blood in the urine, kidney stones and kidney failure.

Two thirds of adults with ADPKD will develop high blood pressure, and 1 in 12 will develop small brain aneurysms.

ADPKD is an inherited condition that causes small, fluid-filled sacs called cysts to develop in the kidneys.

Although children are born with the condition, ADPKD does not usually cause any noticeable problems until the cysts grow large enough to affect the kidneys’ functions.

When ADPKD reaches this stage, it can cause a wide range of problems, including abdominal pain, high blood pressure, blood in the urine, urine infections and kidney stones.

Eventually, kidney function gets worse and worse, until so much is lost that kidney failure develops.

ADPKD affects between 1 in 700-1,000 individuals worldwide, with 12.5 million cases globally, and is currently incurable.

It is caused by mutations in one or more genes, causing them to function abnormally.