Shocking footage shows the tar-blackened lungs of a chain smoker of 30 years being surgically removed.

Instead of being a healthy pink colour, they were heavily charcoaled and extremely inflamed from decades of tobacco residue clogging them up.

Doctors from the Wuxi People’s Hospital in Jiangsu, China, were filmed extracting the organs after the 52-year-old man, who had multiple lung diseases, passed away.

The video has been viewed more than 25million times on social media, with users dubbing it the ‘best anti-smoking ad ever’.

It was uploaded by the hospital with the caption: ‘Do you still have the courage to smoke?’

Dr Chen, a lung transplant surgeon and also vice president of the facility, led the operation.

He said: ‘The patient didn’t undergo a CT scan before his death. He was declared brain dead, and his lungs were donated shortly after that.

‘Initial oxygenation index tests were okay, but when we harvested the organs, we realised we wouldn’t be able to use them.

‘We Chinese love smoking. It would be impractical to say that we wouldn’t accept the lungs of all smokers, but there are strict standards.

‘These include lungs under 60 years of age in a patient who has only recently been declared medically dead; minor infections in the lungs and relatively clean chest X-rays are also acceptable.

‘If the above conditions are met, we would consider transplanting the lungs.’ 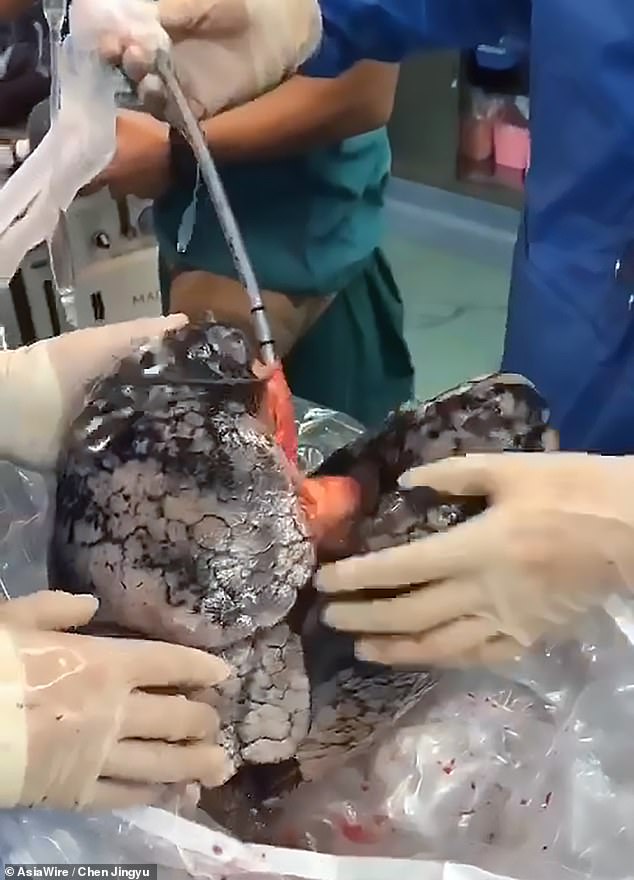 Doctors from the Wuxi People’s Hospital in Jiangsu, China, were filmed extracting the organs after the 52-year-old man was killed from multiple lung diseases 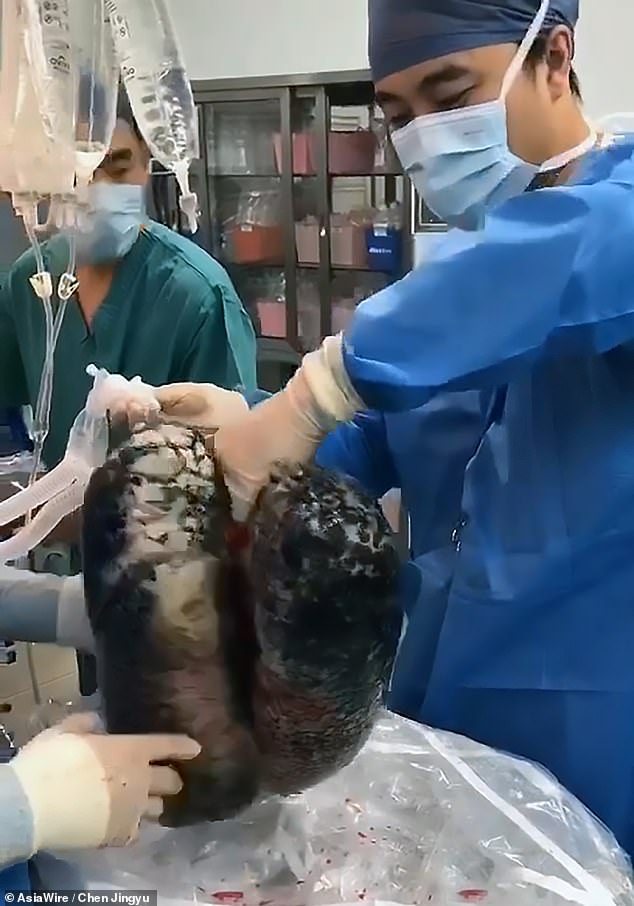 The video has been viewed more than 25million times on Twitter, with users dubbing it the ‘best anti-smoking ad ever’.

The Government will aim to end smoking in England by 2030 as part of a range of measures to address preventable ill health.

Its green paper, released in July, said more needs to be done to improve public health.

The paper read: ‘Thanks to our concerted efforts on smoking, we now have one of the lowest smoking rates in Europe.

‘Yet, for the 14 percent of adults who still smoke, it’s the main risk to health.

Smokers are disproportionately located in areas of high deprivation. In Blackpool, one in four pregnant women smoke. In Westminster, it’s one in 50.’

The paper proposed offering stop-smoking help to all cigarette users who are admitted to NHS hospitals.

‘This includes an ultimatum for industry to make smoked tobacco obsolete by 2030,’ the paper added, ‘with smokers quitting or moving to reduced risk products like e-cigarettes.’

The patient had signed up to donate his organs after death, but medics quickly realised they would not be able to useable.

Professor Peter Openshaw, of the National Heart and Lung Institute, told MailOnline the patient had been suffering from lung pulmonary emphysema.

It causes the organs to become severely inflamed and expand, and makes sufferers short of breath.

He said that medics may have also inflated the lungs with air or fluid prior to harvesting them for donation.

This makes them look much larger than the normal deflated lung postmortem, he explained.

Dr Chen uploaded the clip to social media with the hashtag ‘jieyan’ – Mandarin for ‘quit smoking’.

He wrote: ‘Many smokers in this country have lungs which look like this.

‘Our team decided to reject these lungs for transplant. If you’re a heavy smoker, your lungs may not be accepted even if you choose to donate them after death.

‘Look at these lungs – do you still have the courage to smoke?’

According to a 2018 study by China’s Center for Disease Control and Prevention, 350 million adults (27 per cent) are smokers.

In England, One in seven adults now smoke tobacco – around 5.9million people, down from 7.7million in 2011, when the figure was closer to one in five.

Smoking is the biggest avoidable cause of cancer and is known to produce chemicals which cause at least 15 different forms of the disease.

Evidence shows it causes around 70 per cent of all cases of lung cancer, which has the highest death count of any form of cancer.

People are drawn to smoking because nicotine can make them feel good, but it’s easy to become addicted and very difficult to quit once smoking becomes a habit.

Smoking kills 1.2million people every year and people who do it are twice as likely to have a heart attack and up to 30 times more likely to get lung cancer.