Surrey police’s Facebook snap of ‘PC Thumper’ was a JOKE

A Home Counties police force caused a stir at a local show when they posted joke pictures of their ‘newest recruit’ in uniform – a fluffy rabbit.

The cute bunny was spotted at a country fair wearing a ‘stab proof’ vest custom-made by its owner – complete with a ‘police’ logo.

However Surrey Police were later forced to issue a clarification after people started applying for jobs – as a ‘rabbit handler.’

‘PC Thumper’ was spotted at a country fair in full costume, which included a ‘stab proof’ vest custom made by its owner

Officers in Tandridge, in east Surrey, even included PC Thumper in a posed up picture of all the cops that attended the Edenbridge and Oxted Agricultural Show on Monday.

Coppers at the emergency services stall posed with the dark, short-haired ‘officer.’

But animal lovers were left confused after a photo of the bunny donning a police vest with a tiny badge, baton and handcuffs went viral. Officers posed with the ‘new recruit’, but police were later forced to issue a number of clarifications

Thousands of people have commented and shared the picture of the bunny after police posted it on Facebook.

A police spokesman wrote: ‘New Recruit on Tandridge to assist in searching small and confined spaces.

‘Could you be a Police Rabbit Handler?’ 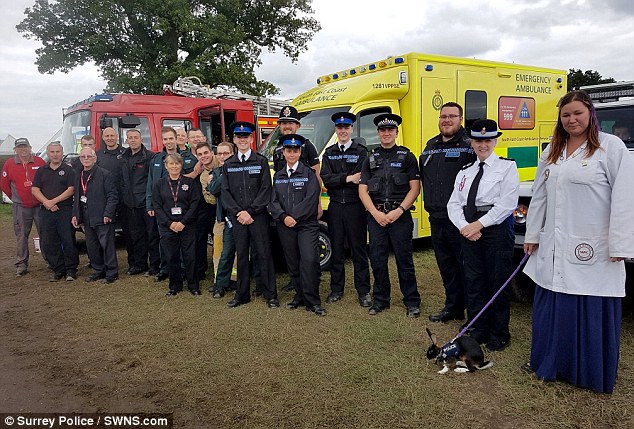 Most Facebook users realised it was a joke immediately – but police were forced to issue a number of clarifications after some took the post seriously and accused officers of animal cruelty.

Lindsey Kent said: ‘I live in Warlingham and have two house bunnies, I could definitely do this.’

Kirsty Tivers asked: ‘This can not be real? Surely? What a cute bunny.’ 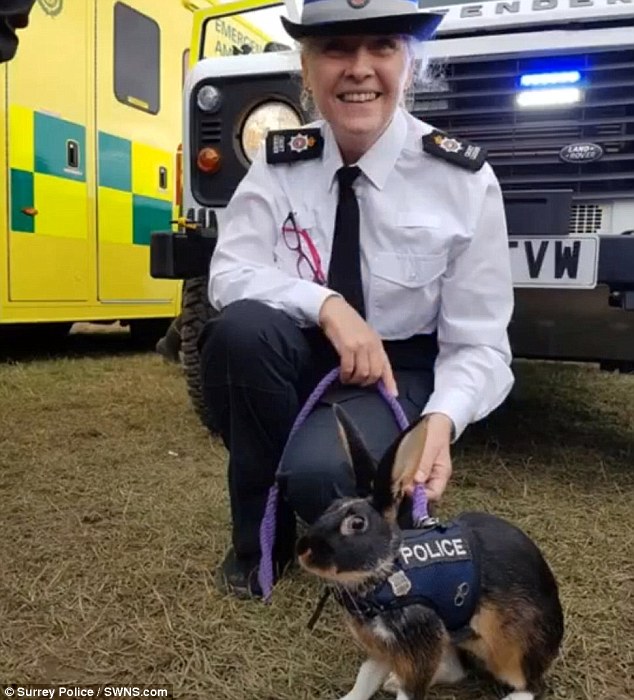 Jackie Evans added: ‘I would love too! And I have the perfect rabbit for my sidekick!’

And Natalie Younger-MacLellan said: ‘Oh my goodness!!! My perfect job!’

Tandridge Beat responded after Helena Dobbie said: ‘Is this for real?’

A police spokesman said: ‘Unfortunately not. This was a visitor to our stand at the show.’

The force again denied the rabbit was a recruit after Melody Forse wrote: ‘As an owner of a litter trained house rabbit, who I’ve had since ten weeks old and he will be 11 November, I can’t believe this is for real.

‘They are prey animals something isn’t right about this. I think this is cruel.’

A number of Facebook users also accused the police of posting for ‘PR’ reasons before it issued a clarification on it page.

Stefan Brett wrote: ‘Hop, in the name of the paw!’

A police spokesperson added: ‘We are sorry to say that the rabbit was a visitor to the 999 village and not our latest recruit in the pursuit of sniffing out crime.’