Survey: White Christians now a minority of US population

The share of Americans who identify as white and Christian has dropped below 50 percent, a transformation fueled by immigration and by growing numbers of people who reject organized religion altogether, according to a new survey released Wednesday.

Christians overall remain a large majority in the U.S., at nearly 70 percent of Americans.

However, white Christians, once predominant in the country’s religious life, now comprise only 43 percent of the population, according to the Public Religion Research Institute, or PRRI, a polling organization based in Washington.

Four decades ago, about eight in 10 Americans were white Christians.

The change has occurred across the spectrum of Christian traditions in the U.S., including sharp drops in membership in predominantly white mainline Protestant denominations such as Presbyterians and Lutherans; an increasing Latino presence in the Roman Catholic Church as some non-Hispanic white Catholics leave; and shrinking ranks of white evangelicals, who until recently had been viewed as immune to decline.

The trends identified in the survey are fueling anxiety about the place of Christians in society, especially among evangelicals, alarmed by support for gay marriage and by the increasing share of Americans – about one-quarter – who don’t identify with a faith group. 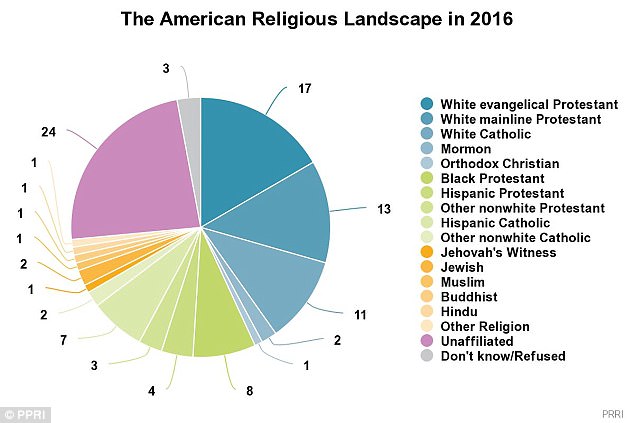 The share of Americans who identify as white and Christian has dropped below 50 percent, a transformation fueled by immigration and by growing numbers of people who reject organized religion altogether, according to a new survey 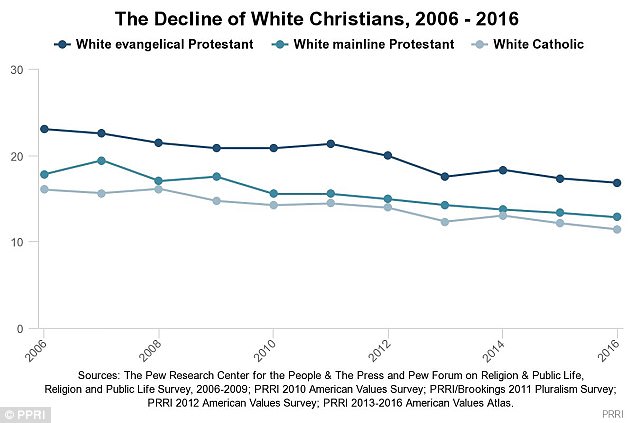 White Christians, once predominant in the country’s religious life, now comprise only 43 percent of the population. The above chart shows the gradual decline of those who identify themselves as white evangelical Protestant, white mainline Protestant, and white Catholic

President Donald Trump, who repeatedly promised to protect the religious liberty of Christians, drew 80 percent of votes by white evangelicals, a constituency that remains among his strongest supporters.

About 17 percent of Americans now identify as white evangelical, compared to 23 percent a decade ago, according to the survey.

Membership in the conservative Southern Baptist Convention, the largest U.S. Protestant group, dropped to 15.2 million last year, its lowest number since 1990, according to an analysis by Chuck Kelley, president of the New Orleans Baptist Theological Seminary.

‘So often, white evangelicals have been pointing in judgment to white mainline groups, saying when you have liberal theology you decline,’ said Robert Jones, chief executive of PRRI. 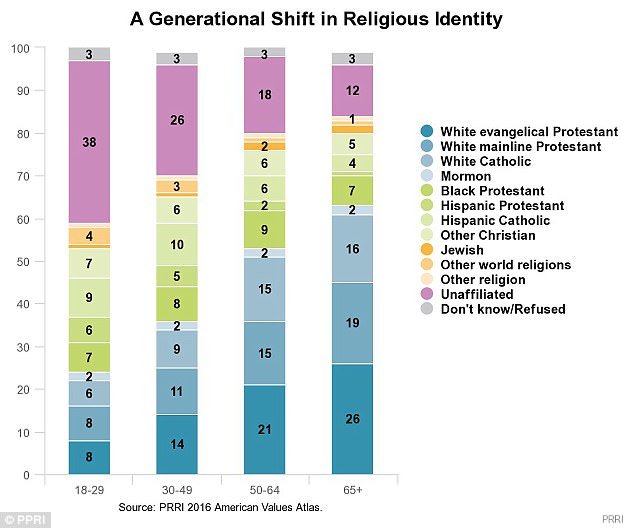 The religious landscape in the U.S. is highly stratified by generation. Nearly two-thirds of seniors identify as white and Christian. Conversely, only about one-quarter of young adults (age 18-29) belong to a white Christian tradition 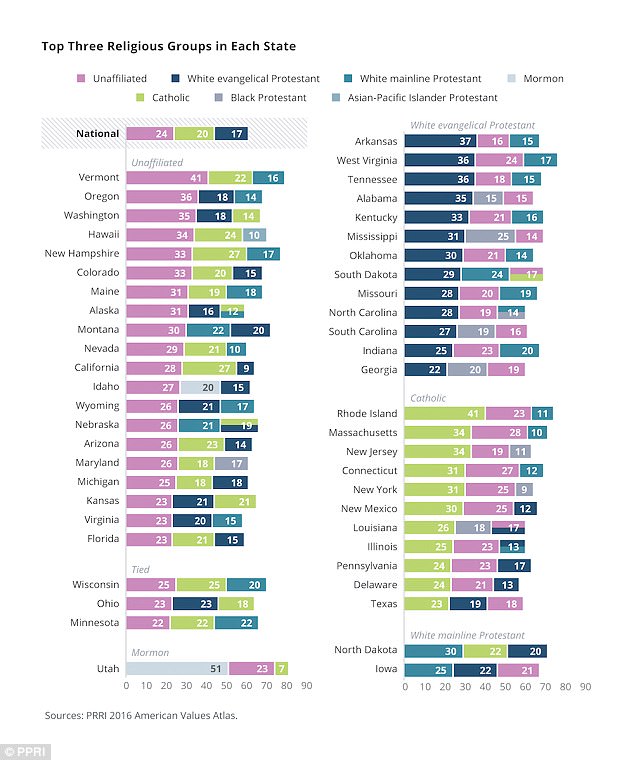 In 11 states, many of which are clustered in the Northeast, no religious group outnumbers Catholics. Collectively, white evangelical Protestants are twice as large in the South (22%) and Midwest (20%) as they are in the Northeast 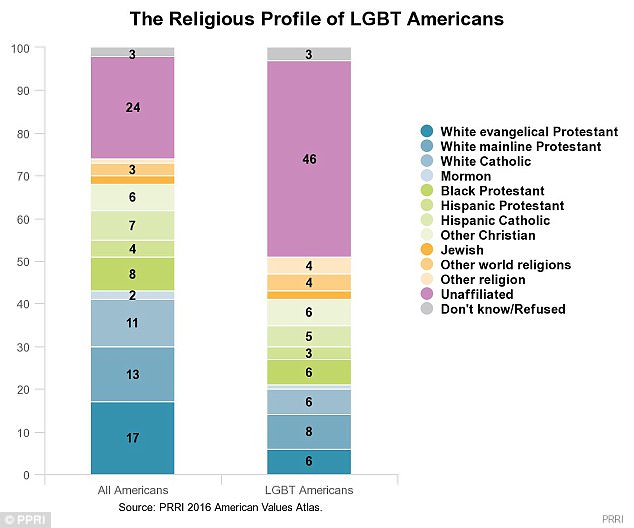 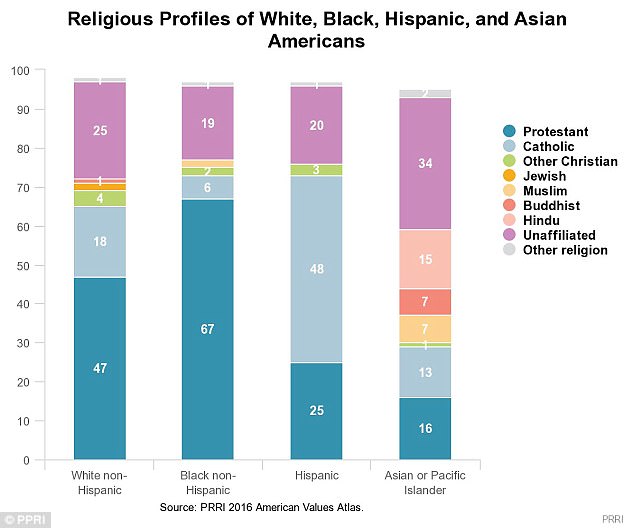 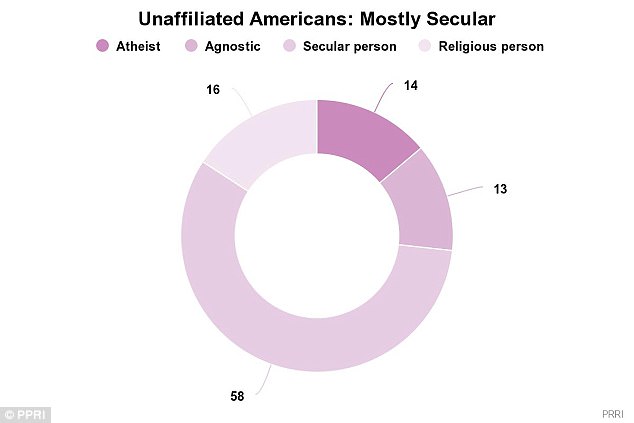 The religiously unaffiliated – those who identify as ‘atheist,’ ‘agnostic,’ or ‘nothing in particular’ – now account for nearly one-quarter (24%) of Americans 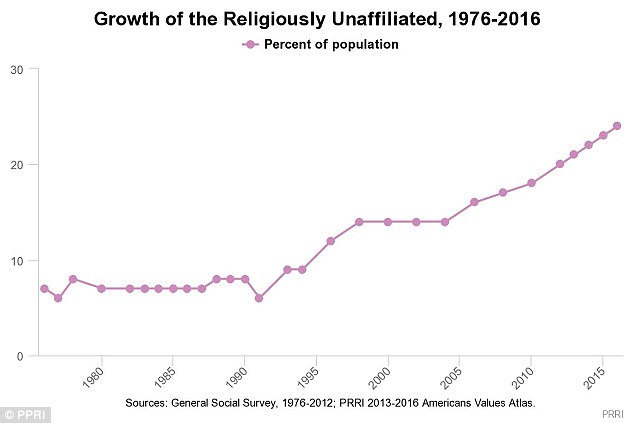 Since the early 1990s, the number of those who identify as religiously unaffiliated has roughly tripled in size 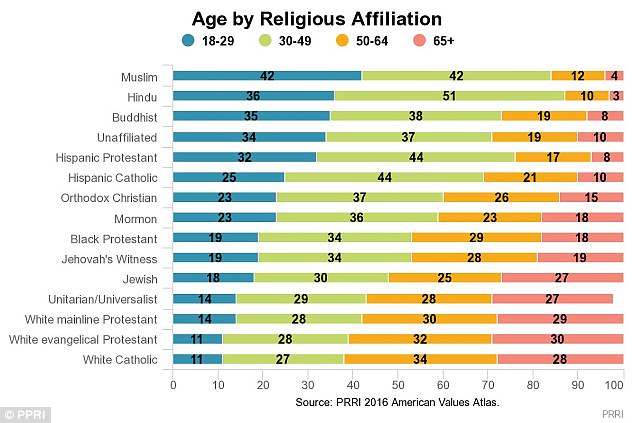 White Christians are not only declining, they are aging. Only slightly more than one in ten white evangelical Protestants (11%), white Catholics (11%), and white mainline Protestants (14%) are under the age of 30 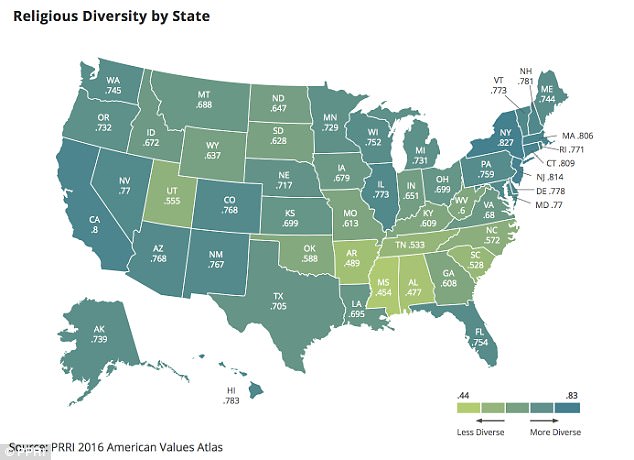 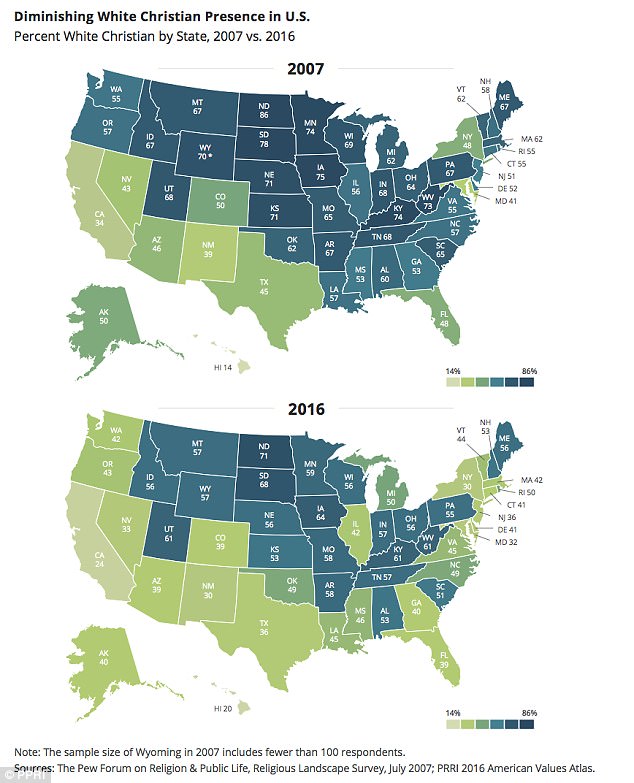 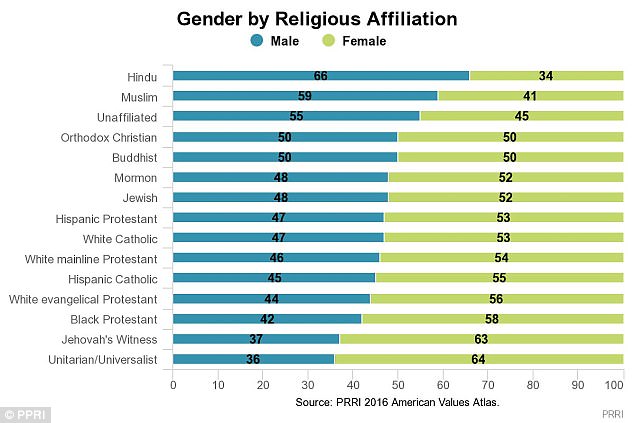 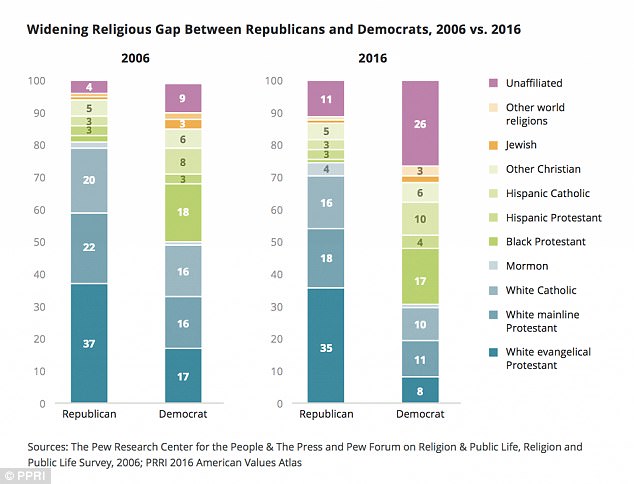 Fewer than one in three (29%) Democrats today are white Christian, compared to half (50%) one decade earlier. More than one-third (35%) of all Republicans identify as white evangelical Protestant, a proportion that has remained roughly stable over the past decade

‘I think this data really does challenge that interpretation of linking theological conservatism and growth.’

The PRRI survey of more than 100,000 people was conducted from January 2016 to January of this year and has a margin of error of plus or minus 0.4 percentage points.

Previous surveys had found that the Protestant majority that shaped the nation’s history had dropped below 50 percent sometime around 2008.

Jones said growth among Latino Christians, and stability in the numbers of African-American Christians, had partly obscured the decline among white Christians.

The survey also found that more than a third of all Republicans say they are white evangelicals, and nearly three-quarter identify as white Christians. 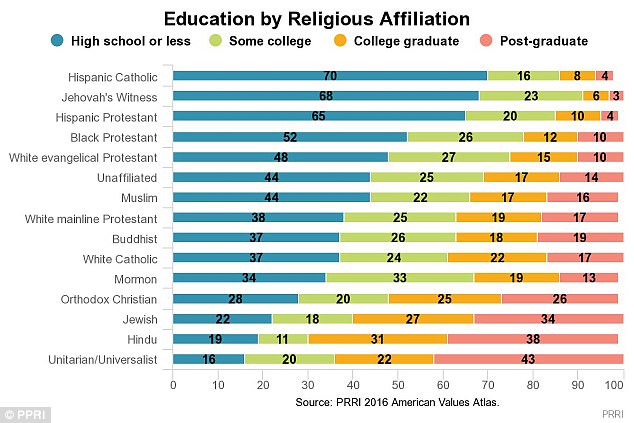 Jews, Hindus, and Unitarian-Universalists stand out as the most educated groups in the American religious landscape

By comparison, white Christians have become a minority in the Democratic Party, shrinking from 50 percent a decade ago, to 29 percent now.

Forty percent of Democrats say they have no religious affiliation.

Among American Catholics, 55 percent now identify as white, compared to 87 percent 25 years ago, amid the growing presence of Latino Catholics, according to the report.

Over the last decade, the share of white Catholics in the U.S. population dropped from 16 percent to 11 percent.

Over the same period, white mainline Protestants declined from 18 percent to 13 percent of all Americans.