John Hemingway, 98, who was born in Dublin, is one of the last nine surviving fighter pilots who saved Britain from a Nazi ­invasion

A Battle of Britain hero who was presumed dead is in fact alive and well, after his family pointed out that he is enjoying a quiet retirement in his native Ireland.

John Hemingway, 98, who was born in Dublin, is one of the last nine surviving fighter pilots who saved Britain from a Nazi ­invasion.

He was awarded the Distinguished Flying Cross for bravery and shot down four times in the Second World War.

However for many years the war hero had been thought to be missing and presumed dead based on the official roll of honour naming the airmen that are still alive.

It was only until a member of Mr Hemingway’s family got in touch with the Battle of Britain Fighter Association to point out the oversight, that their information was amended.

This now means that there are now nine Battle of Britain heroes living in Britain as opposed to eight as what was previously believed.

These nine men are the only survivors of around 3,000 British and allied pilots whose heroic defence of Britain was described by then Prime Minister Winston Churchill as: ‘Never in the field of human conflict was so much owed by so many to so Few.’

Mr Hemingway’s son, Brian, 66, from Guildford, Surrey told The Mirror: ‘He’s not particularly interested in the past. Like so many of his generation, he doesn’t feel as though he did anything special.

‘But he likes the idea he’s one of the last nine and he’s tickled by the fact that he’s the last known Irishman to have fought in the Battle of Britain.

‘He’s loved and he’s not forgotten and that’s the way he likes it.’

After joining the RAF in 1938, Mr Hemingway was posted to France when war against Germany was declared to provide air support for the British ­Expeditionary Force.

After drowning his first enemy plane in May 1940, which was a Dornier bomber, his Hurricane fighter plane was targeted and hit by anti-aircraft fire and had to make a forced landing. 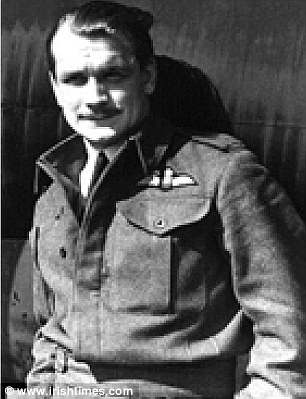 And between July and October 1940, Mr Hemingway had to bail out first after intercepting a flight of German Junkers over the North Sea, where he was saved by a ship that had been passing by.

The second time saw him jump for his life after firing on German planes above the Essex coast.

After he was posted to Italy as a squadron leader, his Spitfire was hit by German ground fire in April, 1945 and he bailed out again.

The years following the war he continued to serve in the RAF before retiring as a group captain in September 1969.

Other post-war RAF jobs included stints at Nato in Paris and the Air Ministry.

After the death of his wife Bridget, Mr Hemingway now lives at a nursing home on the outskirts of Dublin.

John Pulfer, head of the Battle of Britain Historical Society, said: ‘His nephew wrote asking why his uncle wasn’t on the list of the Few left alive.

‘We were not aware he was alive. It’s a great thrill to have another veteran to add to the list. It’s not often you get to say we’ve got one more of the Few.’