Migrants travelling to Europe are being raped and tortured including by forced incest and mutilation, a shocking new study has revealed.

Routine rape and sexual torture throughout their journey to Europe threatens many migrants, especially in Libya, with men facing abuse nearly as regularly as women.

Smugglers torture migrants and film the attacks on Skype to extract ransom money from their families, according to the study carried out by the Women’s Refugee Commission.

One mental health worker described graves filled with men with their penises sliced off – a description corroborated by the account of a survivor of a mass mutilation.

Migrants told similarly horrific stories about rape, forced incest and mass sexual abuse intended to humiliate detainees who had to strip naked and become either rapists themselves or victims.

Men and women are forced to rape others, penises are cut off, boys have to rape their sisters and women are abused and raped until they bleed to death, the report said.

Migrants crowded together at the centre of the Anti-Illegal Immigration Authority in Tripoli in 2017. A new NGO report found men and women face routine sexual torture in Libyan camps 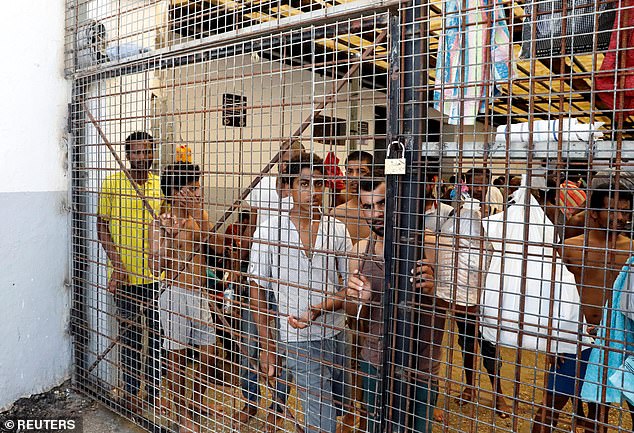 Many men and women held in refugee camps in Libya face regular sexual violence. Pictured is a camp in Tripoli

A survivor from Gambia said, according to the report: ‘If someone had told me this before, I would never have believed it. You can only believe it if you have seen it with your own eyes.’

At one of the official prisons, a 19-year-old Nigerian woman told a health worker that women faced near constant threat of rape, and men only marginally less.

Migrants bribe their way to freedom or escape if they can.

‘They said that if we tell in Europe what is happening in Libya, our brothers and sisters in the prison will pay,’ she said, according to the report.

According to a 20-year-old man from Guinea, ‘when the men came back crying, they would talk about what the guards did to them and how violent it was’.

Sarah Chynoweth, the study’s lead researcher told German broadcaster Deutsche Welle: ‘On their journey through the desert, many refugees are kidnapped by human traffickers and armed groups or taken to official prisons.

‘If a man tries to escape, all other men are forced to rape him. People are regularly punished, forced into submission and controlled.’ 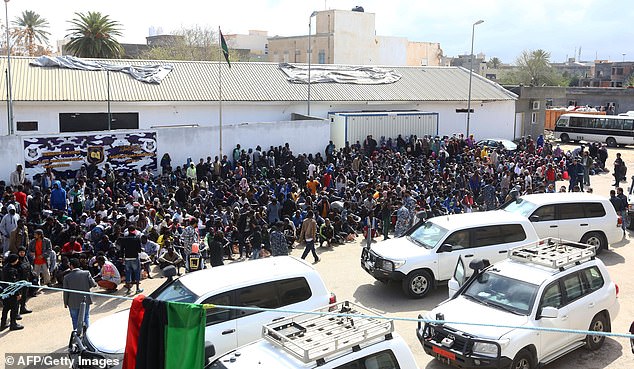 African migrants gathering at the Tripoli branch of the Anti-Illegal Immigration Authority, in the Libyan capital after Libya rescued 420 migrants trying to cross the Mediterranean in 2017 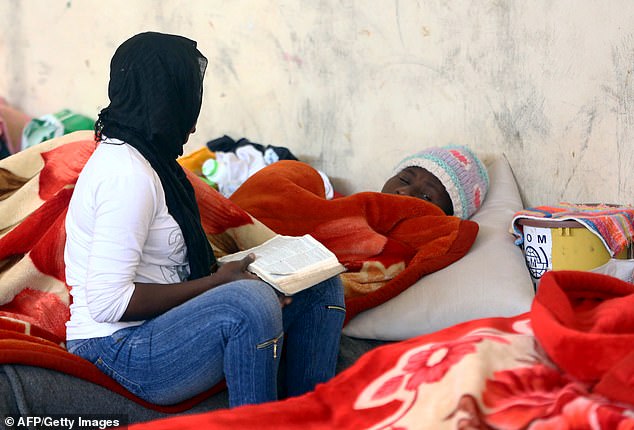 Previous studies have found that nearly all women who cross from North Africa have been raped or sexually abused along the journey, but this report found that the danger was likely nearly as prevalent among men.

The graphic study based on dozens of interviews with aid workers and migrants was released on Monday by the Women’s Refugee Commission.

It comes as Europe has blocked rescues at sea and outsourced its migration policy to Libya’s coast guard instead.

The United Nations High Commissioner for Refugees (UNHCR) estimates there are around 670,000 migrants in Libya and it is believed that between 5,000 to 6,000 are being held in camps.

The EU has spent €338 million ($382 million) in Libya since 2014 to stem migration, much of it on strengthening the Libyan coast guard and the detention centres.

Migrants turned back in the Mediterranean are unlikely to fare much better in official detention than they did in the warehouses, according to Chynoweth.

United Nations staff and aid groups have limited access to the centres and Chynoweth said migrants told her than in any case ‘we were just too terrified to say anything’. 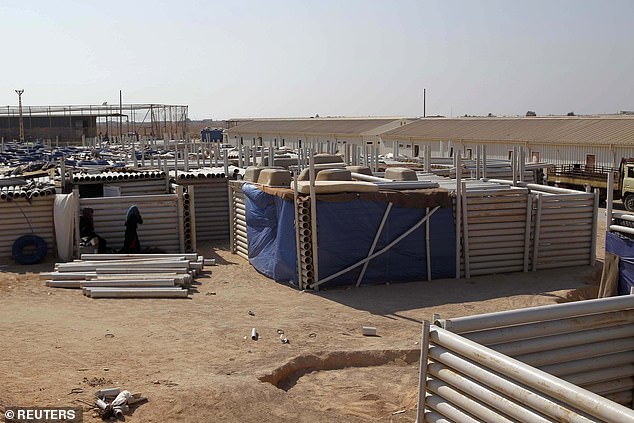 Prefabricated house built for workers at a construction site, which is now used as a refugee camp for displaced people from the city of Tawergha on the outskirts of Benghazi, Libya 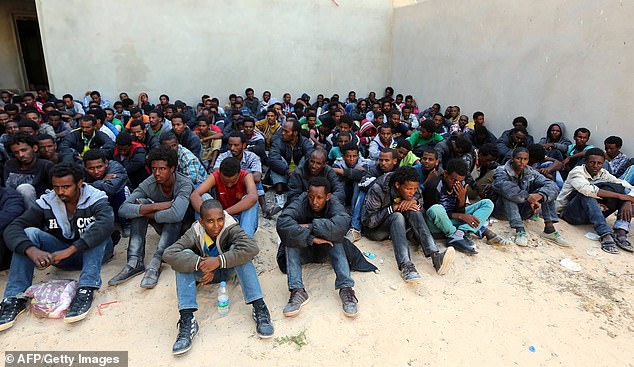 Some of the 340 illegal migrants who were rescued by the Libyan navy off the coast of the western town of Sabratha when their boat began to take on water, sit at a shelter in 2014

With European Union funding, the Libyan coast guard retrieves migrants from the Mediterranean Sea and returns them to detention centres nominally run by the Libyan government, where migrants say the abuse resumes.

Because the men were victimised together, they were willing to talk about it in ways that might otherwise be taboo. Mostly, they don’t talk about it.

The area around Bani Walid is particularly notorious for its clandestine prisons, where migrants have described being held in sunless warehouses for months and even years on end while smugglers try to extract payments from them to continue their journey.

Last May, more than 100 migrants and refugees broke out from one of the lockups, fleeing under their captors’ gunfire.

At least 15 people died and 40 were left behind, according to the aid group Doctors Without Borders. The survivors were ultimately shipped to an official Libyan detention centre.

And now official detention is likely where they will end up even if they make it into the Mediterranean, due to European policy that has effectively banned rescues at sea in an effort to slow migration.

Chynoweth has carried out similar studies among the Rohingya refugees in Bangladesh and Syrian refugees in the Middle East. 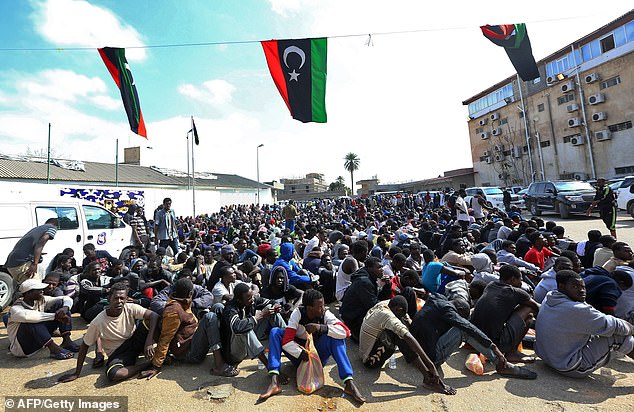 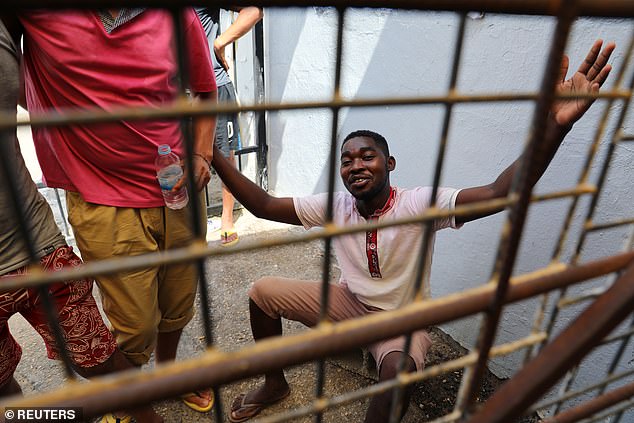 The United Nations High Commissioner for Refugees (UNHCR) estimates there are around 670,000 migrants in Libya and it is believed that between 5,000 to 6,000 are being held in camps

What differs in the European context, she said, is how widespread it is, and the fact that profoundly disturbing forms of sexual torture are used for purposes of extorting ransoms – sent via video to desperate families.

‘The minute people are stopped at sea, Europeans wash their hands of it,’ said Hassiba Hadj-Sahraoui, the humanitarian affairs adviser for Doctors Without Borders, also known as Medecins Sans Frontieres.

Earlier this month, the European Union issued a statement saying the continent’s migration crisis is over, ‘and current levels are a mere 10 per cent of what they were at their peak in 2015’.

The statement cited ‘appalling conditions’ in Libya’s detention centres as an issue, without suggesting solutions.

One of the study’s few bright points came aboard the MSF rescue ship Aquarius. On the ship, the medical team realised that men and boys appeared not to know that what they’d experienced was sexual abuse. 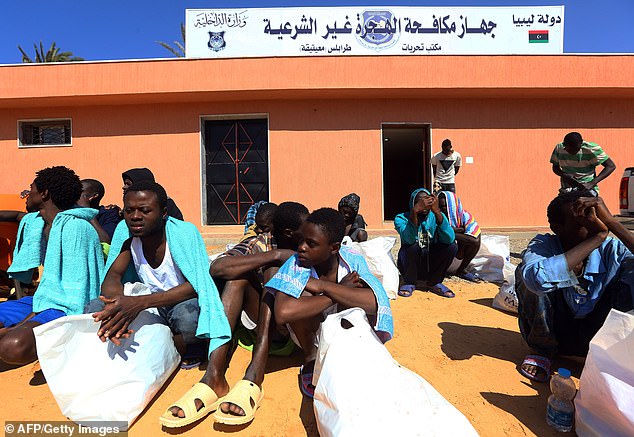 African migrants, whose boat sank off the Libyan coast, gather upon their rescue at the Tripoli branch of the Anti-Illegal Immigration Authority, in the capital

As a result, the study said, 33 per cent of sexual assault survivors who came forward last year on the Aquarius were male, compared with just three per cent in 2017.

‘It was about creating that safe environment, allowing the men and boys to know they’re not alone,’ said Aoife Ni Mhurchu, who was a nurse on board the Aquarius at the time and specialises in working with vulnerable populations.

Few migrants had any illusions that their attackers would face justice, said Ni Mhurchu, who worked in four detention centres in Libya before her time at sea.

She said few detained in Libya would dare come forward while there.

‘This climate of impunity in Libya signals to this extremely vulnerable population that reporting is not only dangerous but futile,’ she said.

The Aquarius is now chartered for a scientific expedition. The only people pulling migrants from the Mediterranean waters off the Libyan coast take them right back where they came from.