Susanna Reid reunites with Ukrainian youngster, 8, who went viral for singing in a bunker

The presenter, 52, initially met Amelia in April after she went viral for singing a song from Disney’s Frozen in a bunker – leading the journalist to travel to the Ukraine border to chat with her.

Set to air on Christmas morning and also co-hosted by Kate Garraway and Ben Shephard, the festive episode sees the youngster updating Susanna on what she has been up to since they last met.

Christmas episode: Susanna Reid was reunited with the Ukrainian youngster, 8, who went viral for singing in a bunker during the Good Morning Britain extended special, which will air on Christmas Day

Amelia went viral earlier this year when she sang Frozen’s ‘Let It Go’ from a bunker in Kyiv, with Susanna first meeting her in Poland before she and her mother arrived in the UK at a later date.

During the reunion, Kate, Ben and Susanna sit down to welcome her as the latter exclaims: ‘It’s such a delight to see you, I’m so thrilled to see you!’

When asked what she has been up to since they last met, Amelia speaks about having been in America and also how she has recorded a song for a secret project. 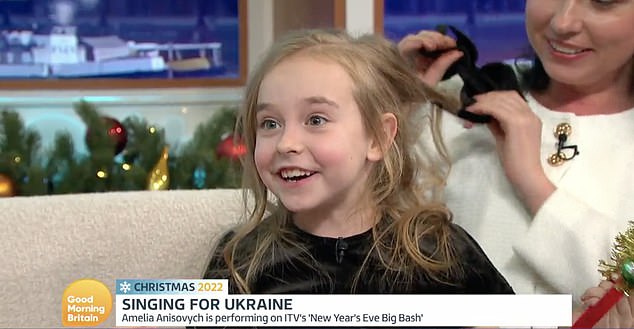 Reunited! The festive episode sees the young girl, named Amelia Anisovych, updating Susanna on what she has been up to since they last met 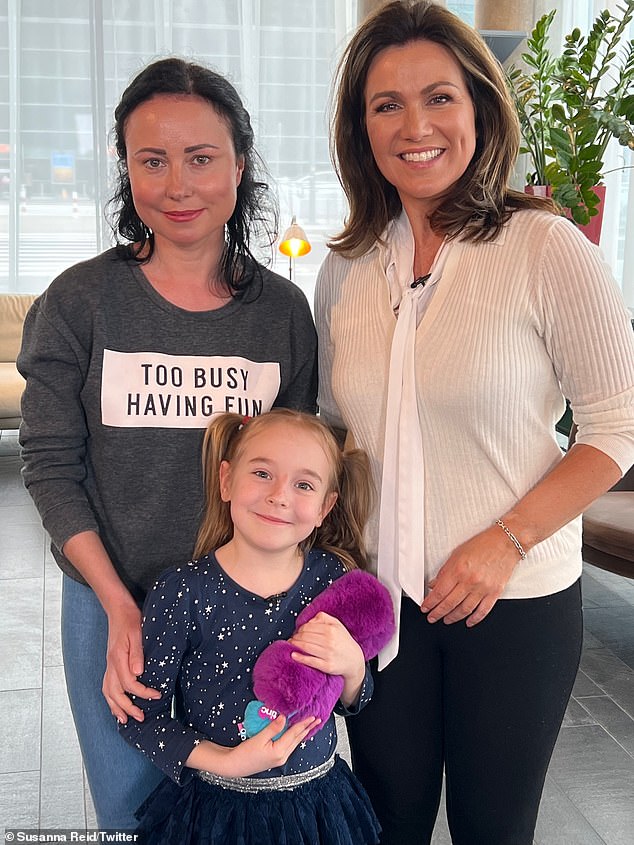 First meet: The presenter initially met Amelia in April (pictured) after she went viral for singing a song from Disney’s Frozen in a bunker – leading the journalist to travel to the Ukraine border to chat with her 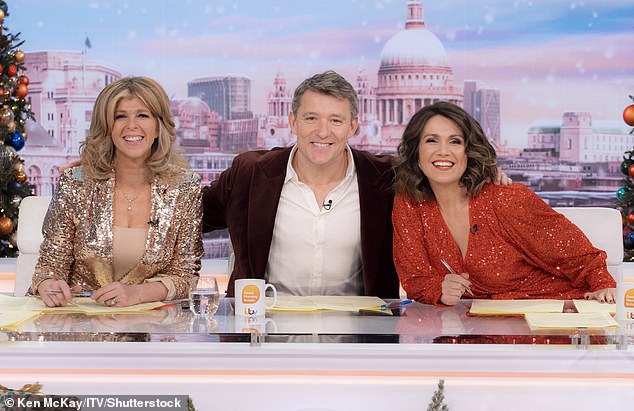 Susanna also asked what she will be doing to celebrate Ukrainian Christmas, which takes place on 7th January each year.

Keeping it traditional, Amelia shared that she would be ‘with the whole family, sitting and eating,’ adding that she ‘can’t wait’ to see her whole family.

‘We are going to Kiev to see my dear husband – Amelia’s father – my son, my mother and father, and my brother,’ said her mum Lilia. 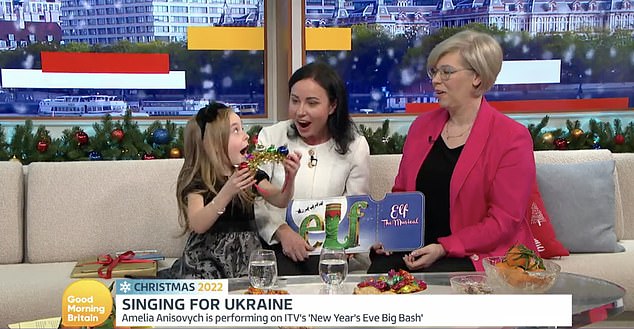 Gift time! The presenters passed over a goody bag of gifts, which appeared to be a massive hit with Amelia – who placed a Christmas headband from the bag on her head immediately 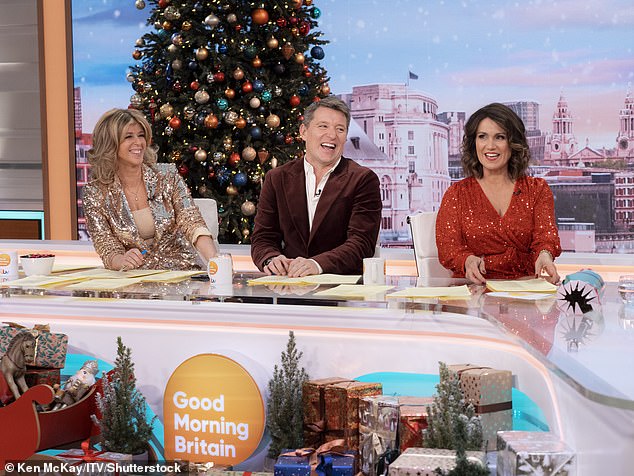 Glitzy: Getting into the festive spirit for the episode, Kate (left) went for a gold sequinned suit while Susanna (right) stuck with a similar theme in a red sequinned wrap-over dress 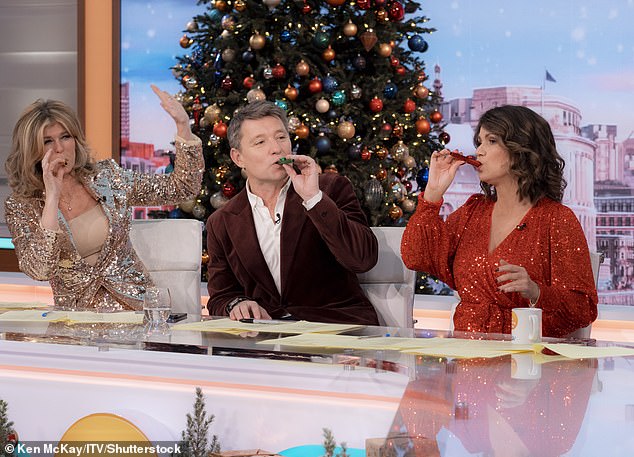 Special: While Ben sat in between the beauties in a burgundy velvet blazer, as they got the party blowers out to celebrate the special episode

Continuing: ‘It’s very difficult. This is our favourite time of the year and when I look to prepare for Christmas, I think only about how there can’t be war or missile attacks in Ukraine at that time.’

Offering words of support, Susanna told them: ‘Our hearts are with you… Good luck on the journey home. We just all hope and pray that it can all come to an end as soon as possible. We hope your family stays safe.’

And getting well and truly into the festive spirit, she and Kate gifted Amelia with Christmas video messages from celebrities including Adam Lambert, Scarlett Douglas, Jill Scott, Jason Manford, Alesha Dixon and Tom Grennan. 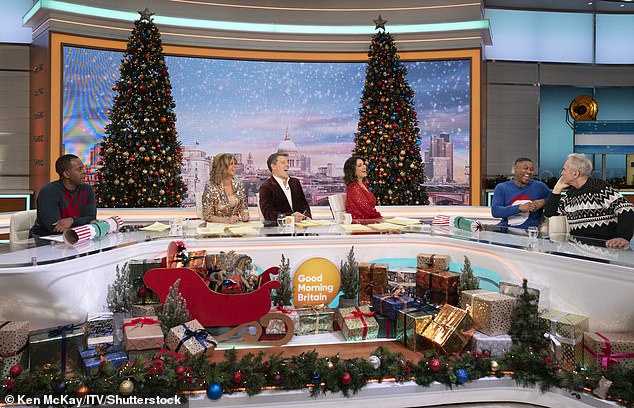 Matching: Andi Peters, Ricki Haywood-Williams and Larry Lamb all got the clothing memo as they joined the panel in Christmas jumpers 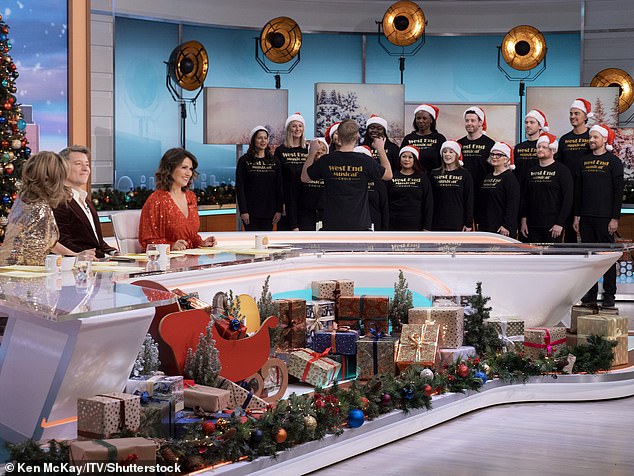 Muscial acts: While the West End Musical Choir and The Canterbury Cathedral’s Scholars also joins to sing some carols

The presenters passed over a bag of physical gifts too, which appeared to be a massive hit with Amelia – who placed a Christmas headband from the bag on her head immediately.

Taking to the studio, Doc Martin’s Caroline chats about the last ever episode of the medical comedy-drama this Christmas Day, before playing a special Port Isaac quiz with Ben.

Good Morning Britain airs this Christmas Day from 7am on ITV1 & ITVX. 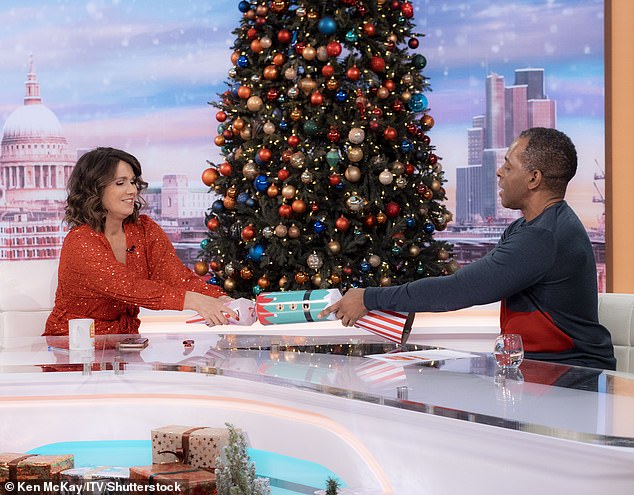 Come on! Susanna took on Andi as they pulled at a giant Christmas cracker at one point in the show 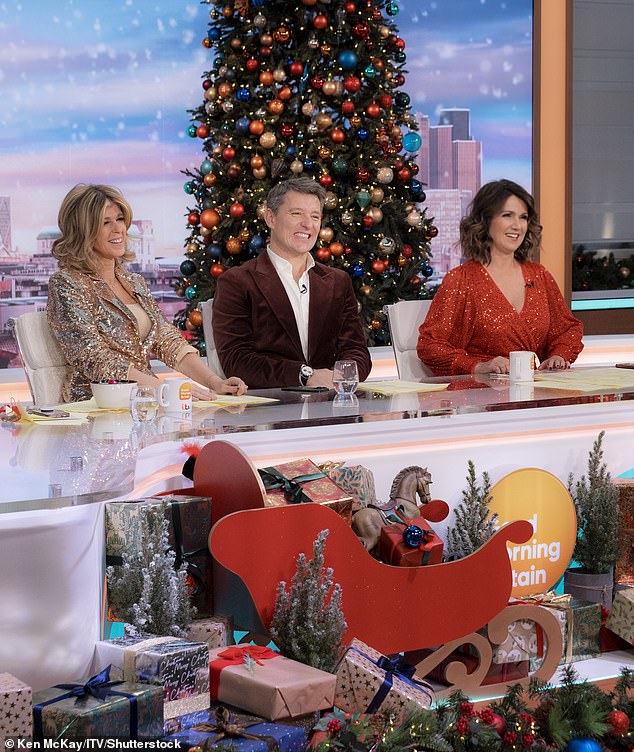 Watch it: Good Morning Britain airs this Christmas Day from 7am on ITV1 & ITVX