Authorities say they have captured the man responsible for the Thanksgiving night shooting at a crowded Alabama shopping mall, where police killed a soldier they thought was the shooter.

Acting on a tip that Erron Martez Dequan Brown, 20, was at a family member’s home in Georgia, police obtained a warrant for his arrest.

Police say he was apprehended at 9.30am Thursday at the Atlanta home, a week after the incident that resulted in police shooting and killing Emantic ‘EJ’ Bradford Jr., 21, believing he was responsible for opening fire and injuring two people at the Riverchase Galleria in Hoover.

The Alabama Law Enforcement Agency says Brown of Bessemer was charged with attempted murder in the shooting of Brian Wilson, who was a friend of Bradford’s.

Wilson was shot at least one in the stomach, and taken to a nearby hospital where he remains in serious condition, according to AL.com.

A 12-year-old bystander, Molly Davis, was also shot and taken to Children’s Hospital. She has since been released. 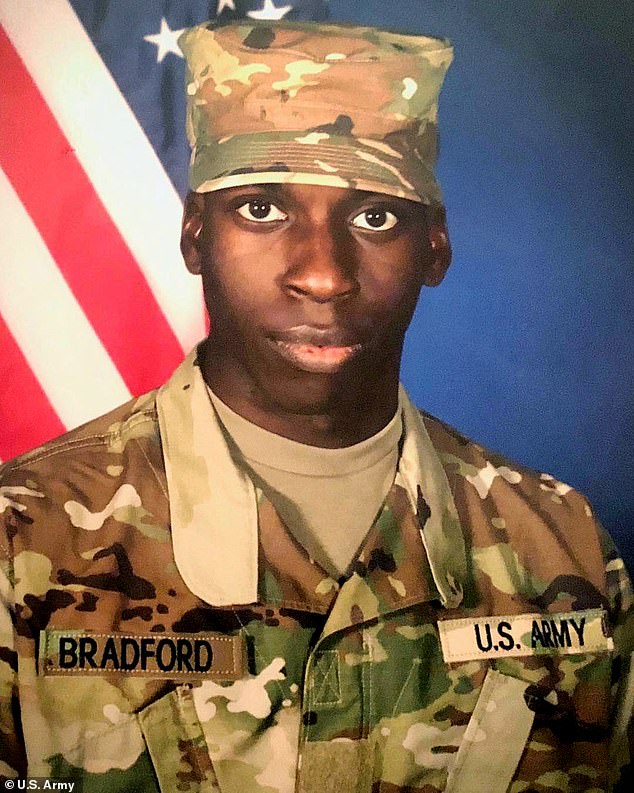 Emantic Bradford Jr, 21, who was army vet, was mistaken for a shooter and killed by police at an Alabama mall on Thanksgiving night 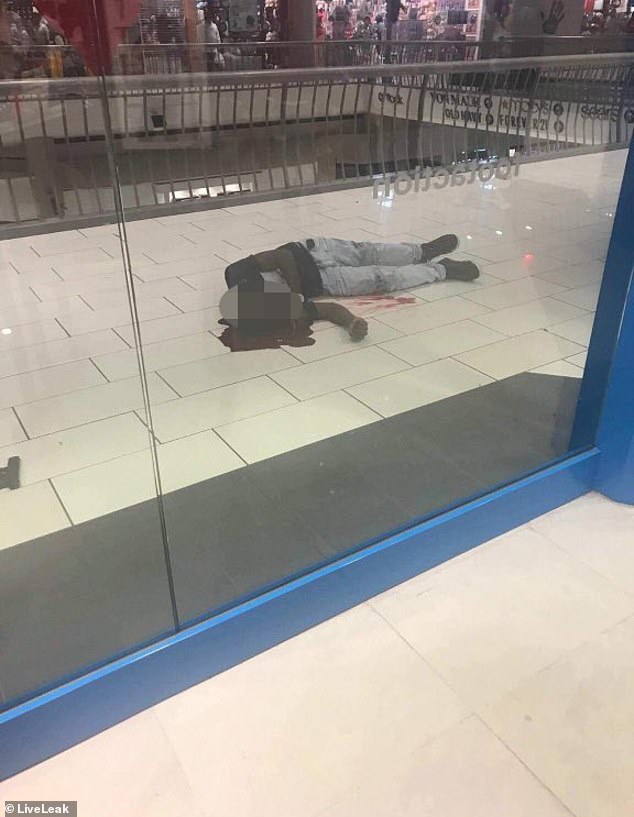 Video footage from passerby shows the Emantic Fitzgerald Bradford Jr’s body laying on the ground in a pool of blood at the Riverchase Galleria in Hoover, Alabama Thanksgiving night

Brown was taken to the Fulton County jail for an extradition hearing to be sent back to Alabama. His bond is set at $125,000.

Those who saw the incident take place seemed to think Bradford was innocent and likely obtained a permit to hold a firearm, as heard in a video from the night that has circulated on Facebook.

‘They just killed that man in cold blood. They just seen that man had a gun on him. They shot that man down for no reason,’ someone in the video posted by Noland Moore can be heard saying in the clip. 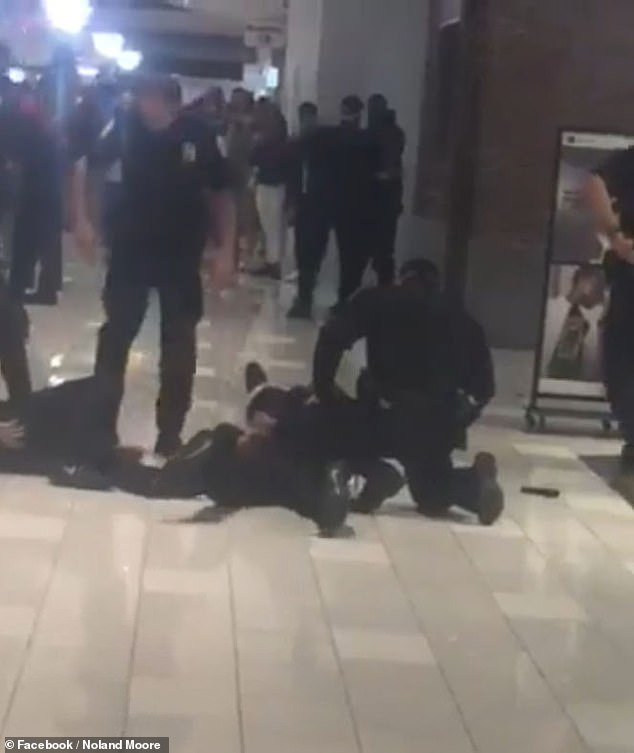 The soldier was shot by cops and witnesses immediately believed he was innocent. Passersby filmed scenes and are heard saying he was killed for ‘no reason’ 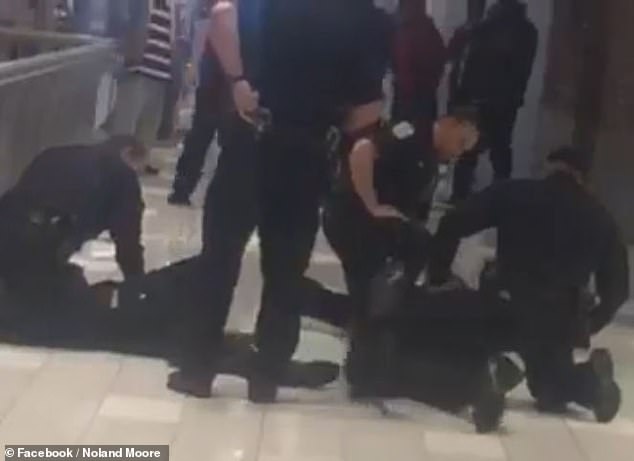 He then adds: ‘The police see that boy had a gun. He probably got a gun license and everything.

‘He just walked passed us and they’ve probably just seen that man’s gun and shot him… they just killed that black boy for no reason.’

Witnesses can be heard talking among themselves as they watch the life leaving Bradford’s body, describing him as ‘bleeding out’.

Some passersby ask if the witnesses saw what happened. One woman responds: ‘That’s not right. Ain’t nobody filming this?’

The caption on the video reads: ‘Damn I just look back it’s sad that they didn’t try to help him look at the dot.’ 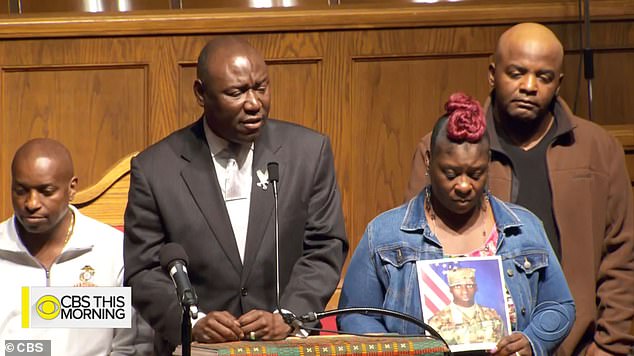 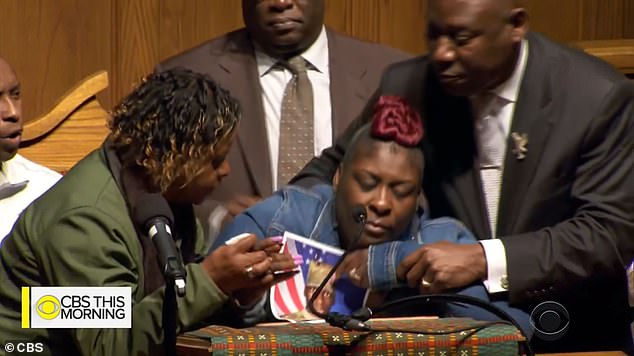 Bradford, 21, was armed with a gun at the Hoover shopping center but also had a concealed weapons permit.

His family is demanding surveillance footage of the incident is released and also wish to see body-cam footage from the officers responding to  incident where an 18-year-old man and a 13-year-old girl were shot by a suspect who is still on the loose.

Around 200 people turned up for a community vigil at Sixteenth Street Baptist Church in Birmingham Tuesday to show support for Bradford’s mother April Pipkins.

The distraught parent received a standing ovation but collapsed at the civil rights landmark, still in disbelief her son died on Thanksgiving Day, and was taken to hospital.

Like many others, Pipkins believes Bradford was gunned down without a second thought simply because of the color of his skin.

She had previously said ‘the whole scenario would have played out differently’ with Hoover police if her son were white. 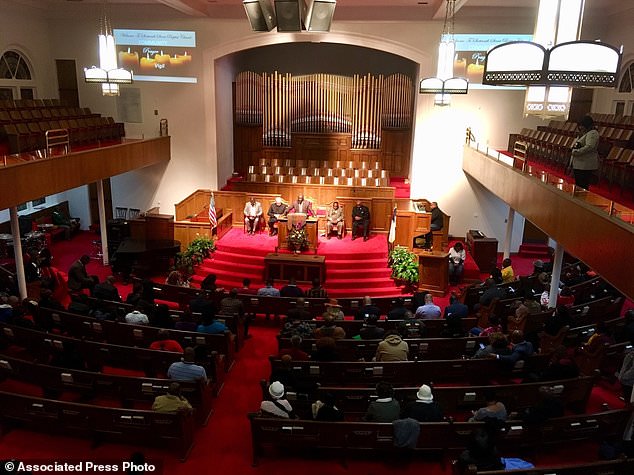 ‘I have to go bury my baby boy,’ CBS News reports father Emantic Bradford Sr. said. ‘And it hurts me to the core because being at home every day ain’t going to be no fun because I can’t talk to my child.’

Bradford, who is undergoing treatment for cancer, added:  ‘I can’t hear him say ‘daddy’ no more.’

The family’s lawyer said that despite talk that more Americans should be armed to ensure their safety, this incident proves that’s not the case.

‘There’s some suggestion… that to stop the bad guys with guns we need to have the good guys with guns. Well, EJ Bradford was a good guy with a gun,’ Benjamin Crump said.

The lawyer said witnesses had contacted his law firm saying Bradford was trying to wave people away from the shooting.

Pipkins described her son as a loving, friendly young man, saying he had gone to the mall with friends on Thanksgiving evening. 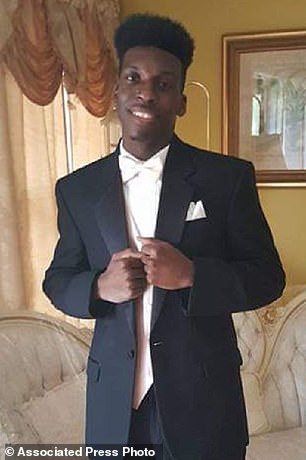 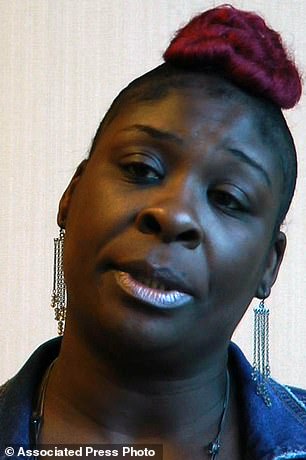 Bradford, Jr. (left), 21, was believed to be waving people away from the shooting scene when he was gunned down. Pipkins (right) said her son would still be alive if he had been white

She said the officer ‘should be punished for what he did’ after her son was killed last Thursday.

Pipkins said she did not find out what happened to her son until Friday morning when she returned a call from one of his friends who had tried to reach her during the night.

‘I can’t get it out of my head. I cannot get the scene out of my head of my child laying there, nobody around him trying to help him, just laying like a piece of trash where everyone can walk around and parade and post pictures of him on social media,’ she said.

Speaking from the pulpit, regional NAACP field director Kevin Myles said Bradford’s killing was part of a pattern of police killing black men without cause.

‘This is our personal Katrina. The helicopters are not coming, nobody is coming to bring us water. If we are to be saved we will save ourselves,’ he said, in an analogy to the devastating hurricane of 2005.