The suspect in a mail bombing spree targeting critics of President Donald Trump has been identified.

Cesar Altier Sayoc was taken into custody on Friday morning in Plantation, Florida in connection with the 12 suspicious packages that have been discovered this week.

According to Sayoc’s Facebook page, he is a Trump fan who posted pictures and videos of himself at one of the President’s rallies in October 2016.

He posted a photograph of himself wearing a MAGA hat in front of the US Capitol in 2017.

He is Native American, and according to a picture posted on his social media page, he is a member of the Seminole Tribe of Florida.

The suspect in his 50s was arrested in front of an AutoZone store in Plantation, a police source tells DailyMail.com.

Michelle Taylor, a nurse at the Senior Medical Associates clinic, saw police taking a vehicle believed to be Sayoc’s into custody.

‘We’ve been in the office for an hour and we’re so nervous,’ she said. ‘The police were surrounding some kind of a van. Thank god we’re done with our patients for the day and there’s only two of us in here.’

A witness who works at Marlins Insurance said dozens of police cars descended on the area around State Road 7 and SW 8th Street about 10am, a few feet away from her office.

‘It’s really bad,’ the woman said by telephone. She declined to give her name. ‘We heard a loud bang, like a bomb exploding. Police officers who told us to stay inside said they were arrested the guy who’s been sending bombs all over the place. It’s pretty scary but we’re inside trying to get some work done.’

The suspect is reportedly a former resident of New York who is living in Florida. The 12 mail bombs are all believed to have been handled by a regional mail sorting facility in southern Florida.

The suspect is known to law enforcement, and has a history of making terroristic threats to judges, sources said. 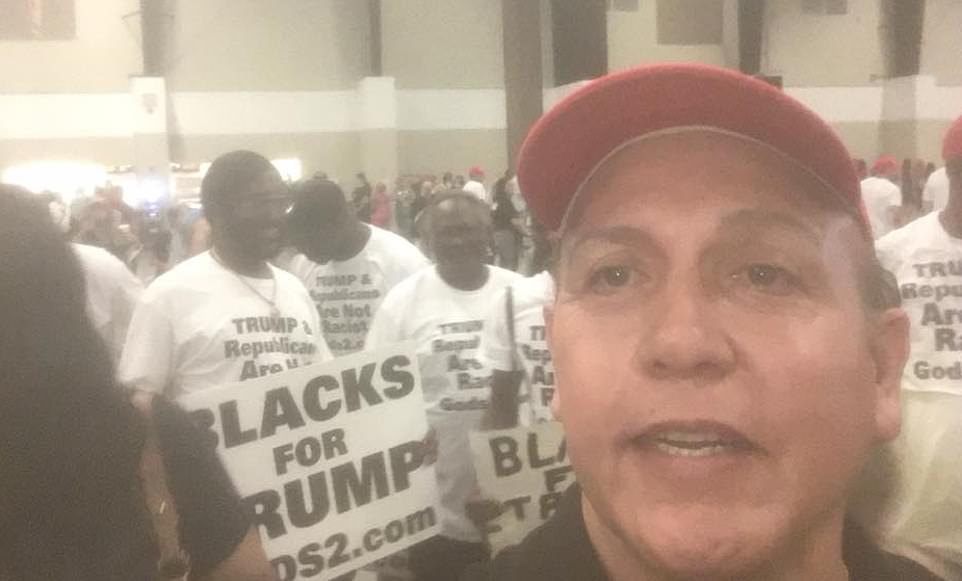 Heavy police activity was seen in Plantation, Florida, a town to the west of Fort Lauderdale and directly south of Sunrise, the location of Debbie Wasserman-Schultz’s office, which the bombs listed as a return address.

Police impounded a white panel van that is believed to be connected to the investigation.

The Department of Justice announced a press conference for 2.30pm at which further details are expected to be available. 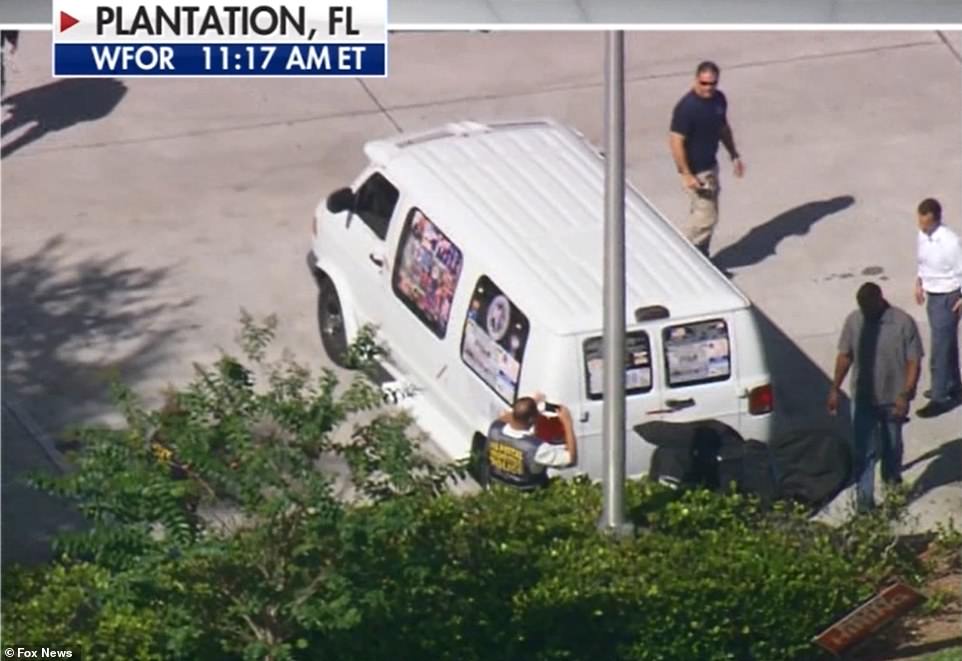 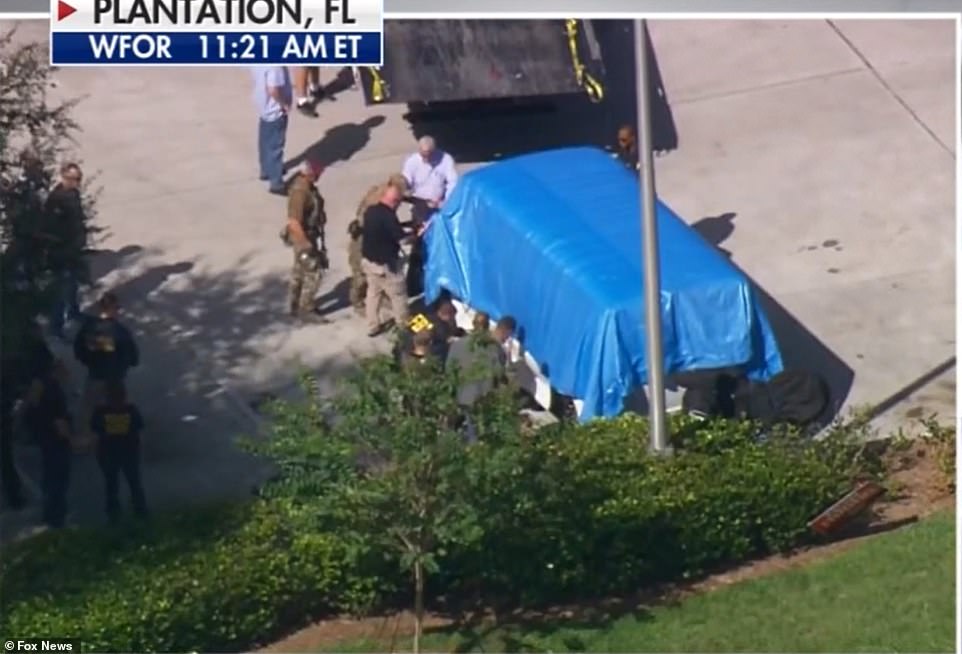 Investigators are seen impounding a white panel van in Plantation, Florida on Friday in connection with an arrest 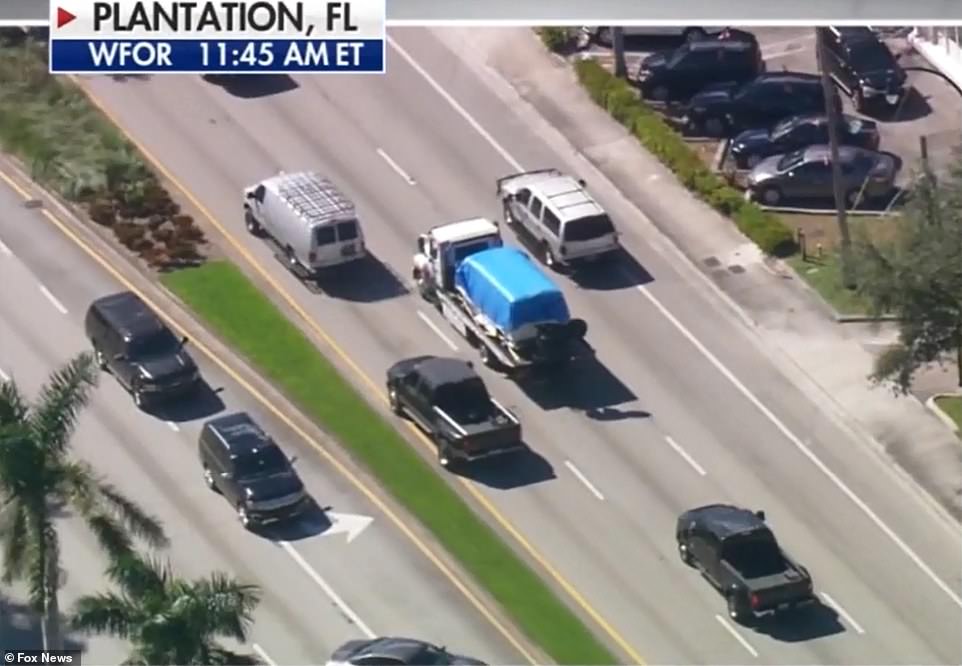 Earlier in the day, the investigators said they had found two new packages believed to be part of the mail bombing spree, addressed to Senator Cory Booker and former Director of National Intelligence James Clapper.

The two new packages marked the 11th and 12th suspected mail bombs in a spree that has targeted critics of Trump.

Trump’s first public response to the latest suspicious packages was a tweet at 10.19am reading: ‘Republicans are doing so well in early voting, and at the polls, and now this ‘Bomb’ stuff happens and the momentum greatly slows – news not talking politics. Very unfortunate, what is going on. Republicans, go out and vote!’ 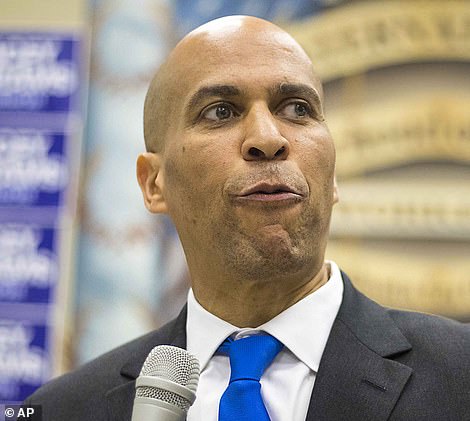 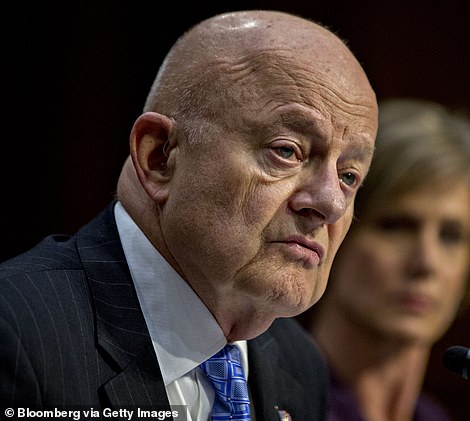 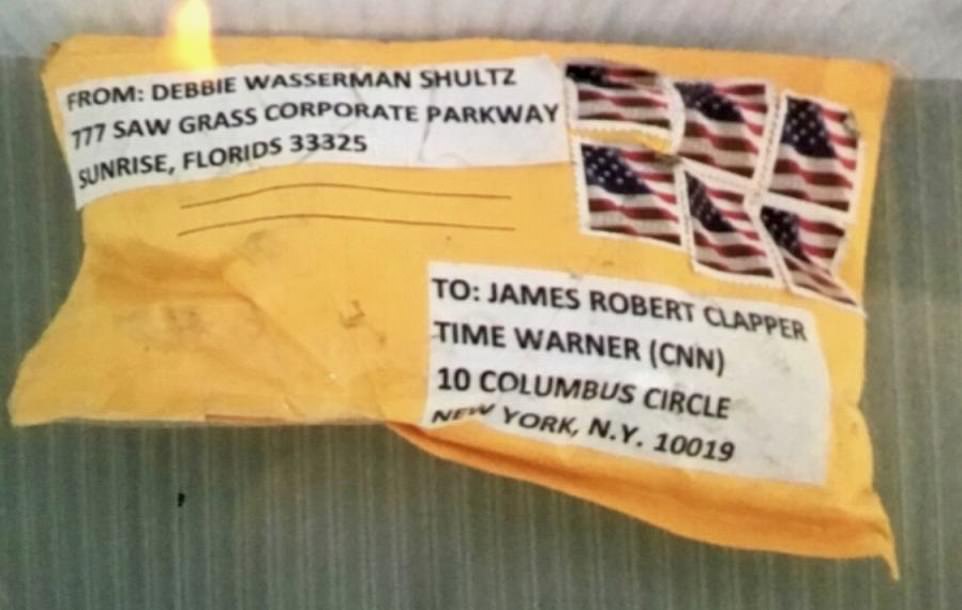 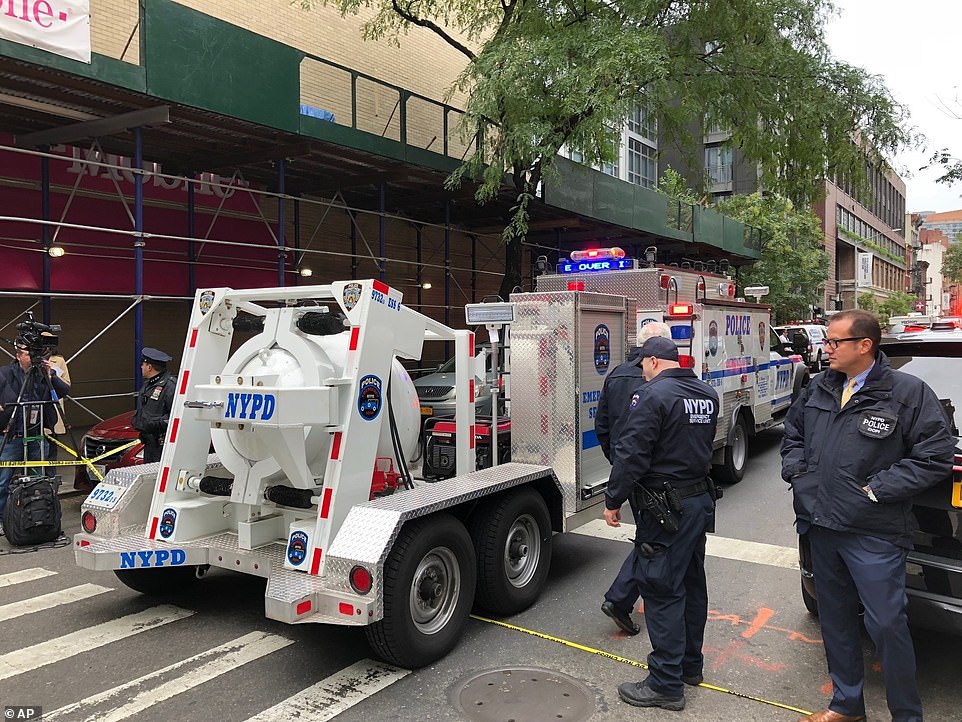 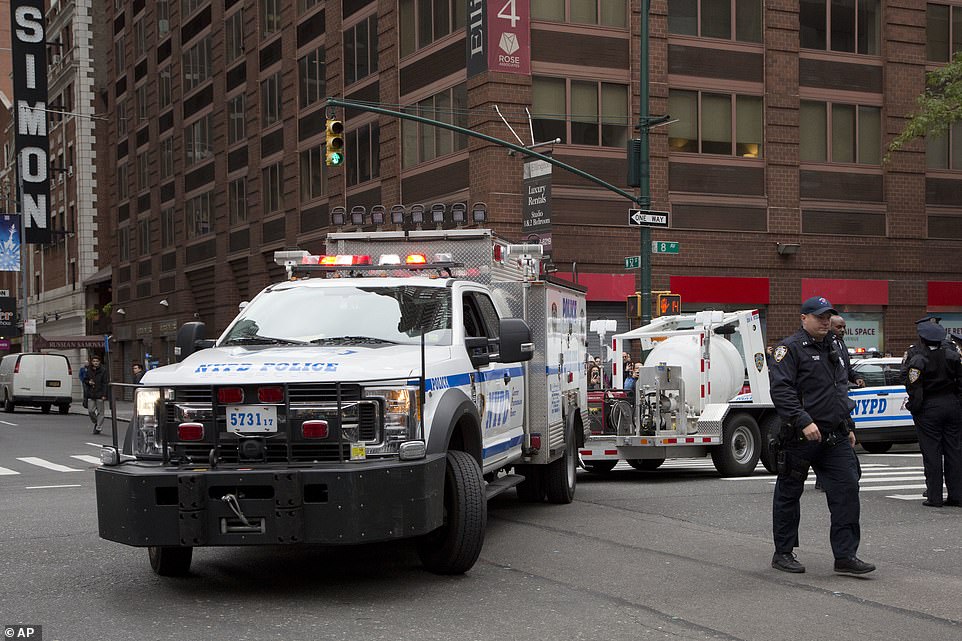 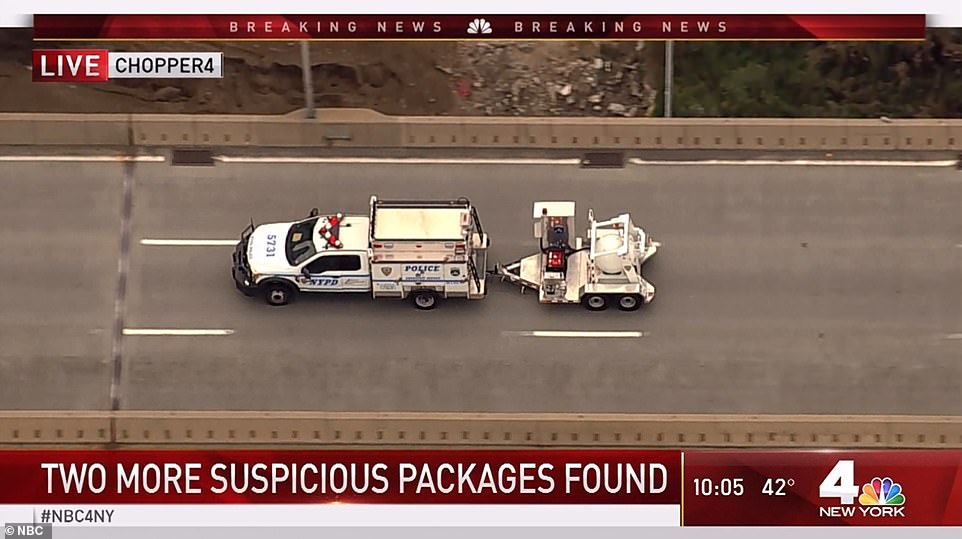 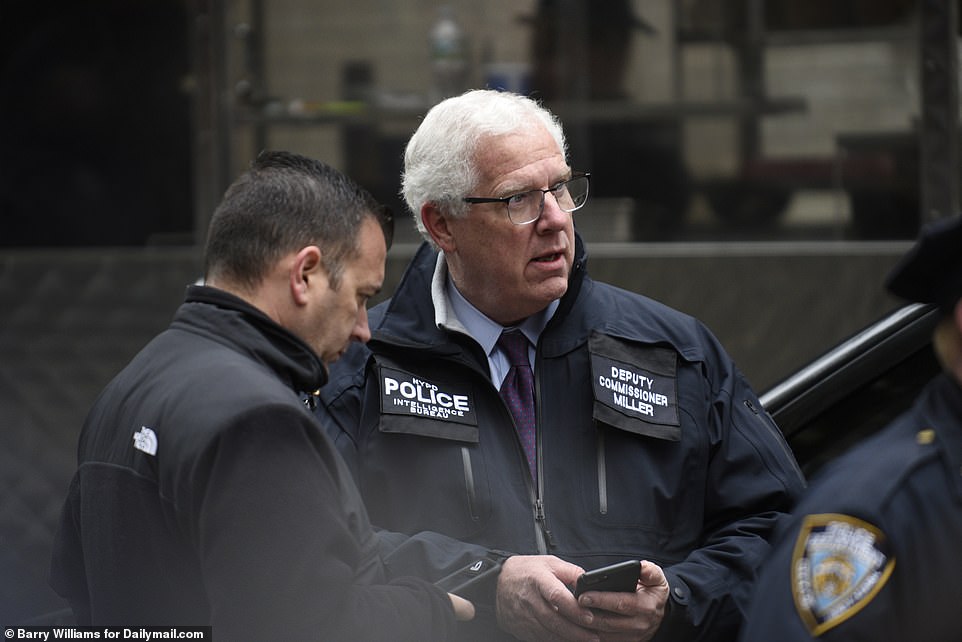 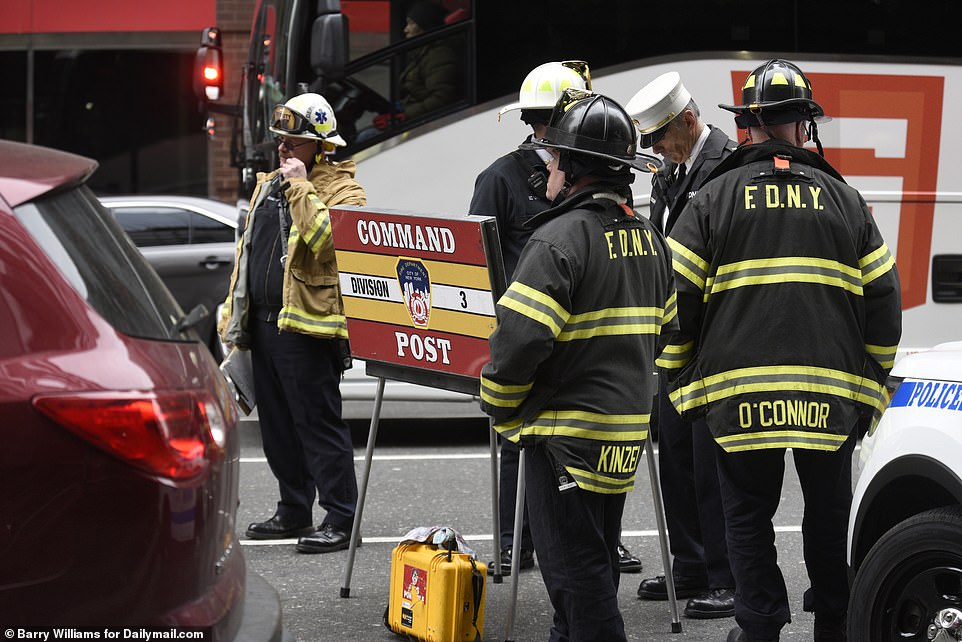 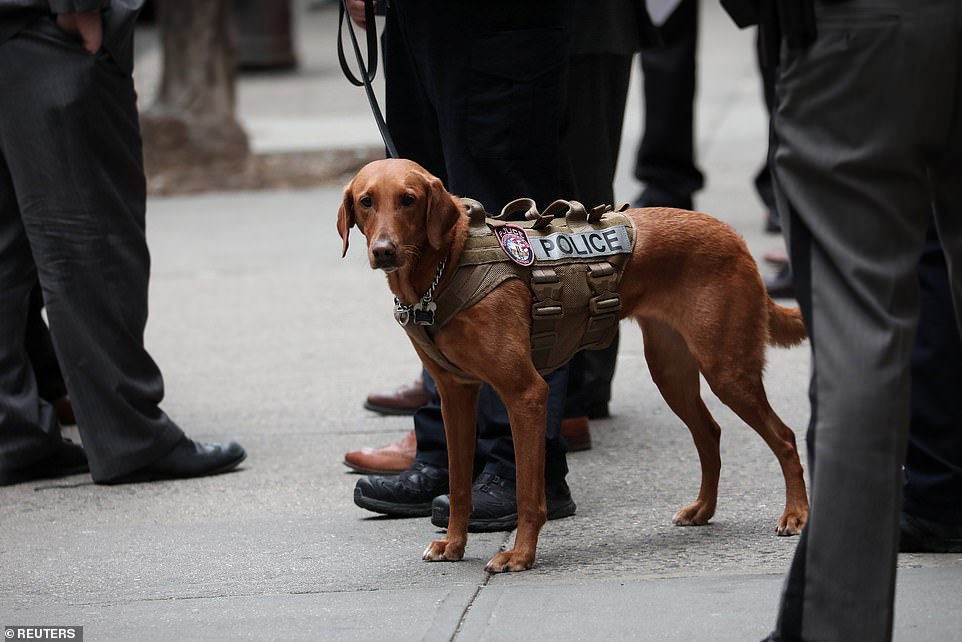 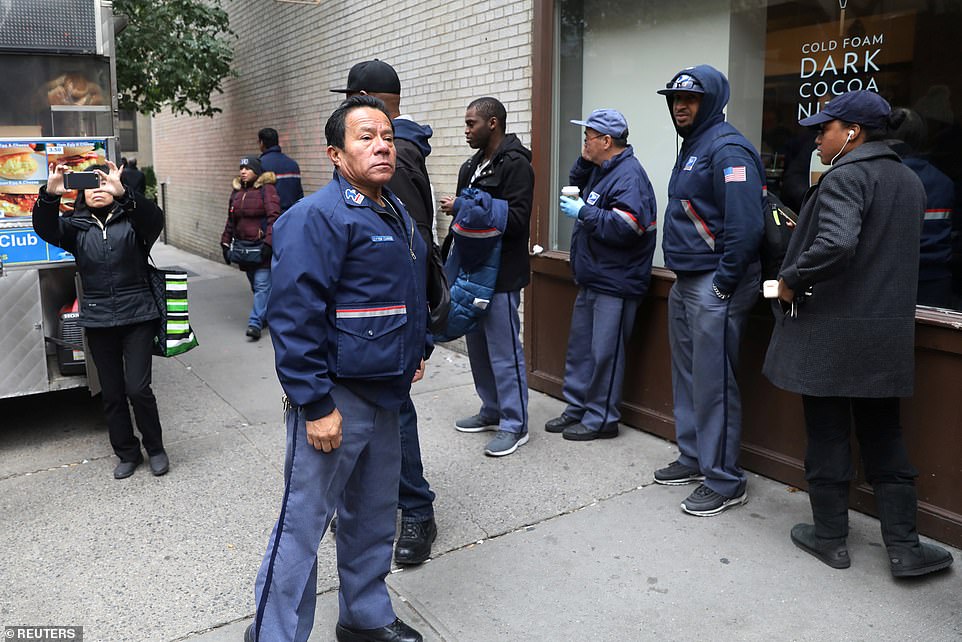 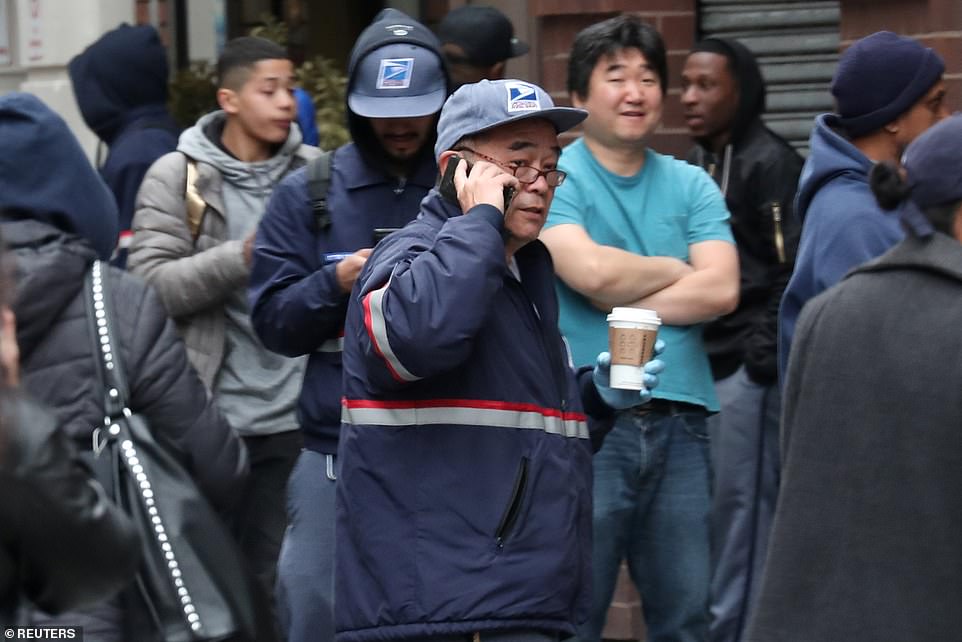 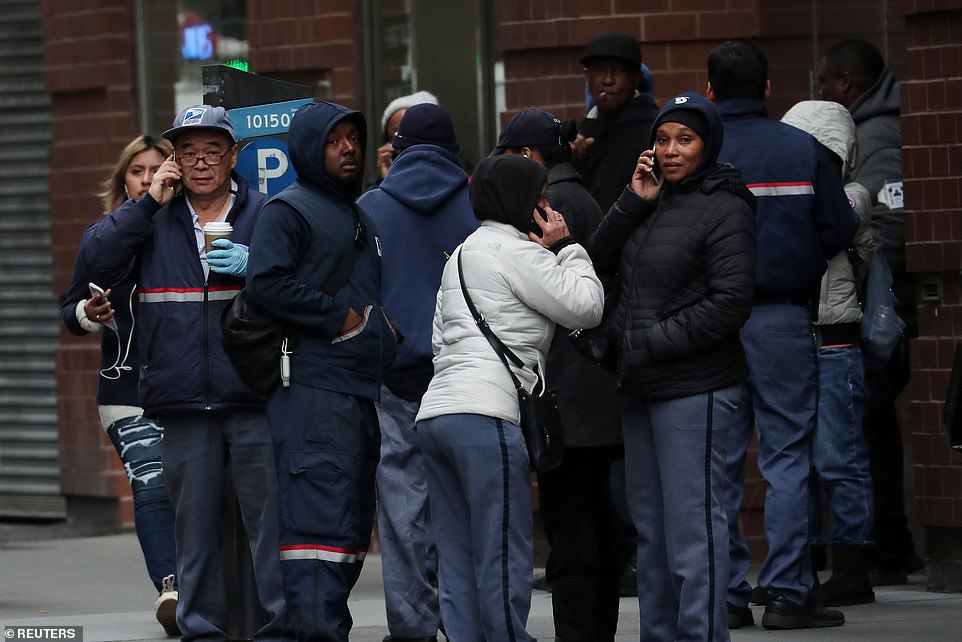 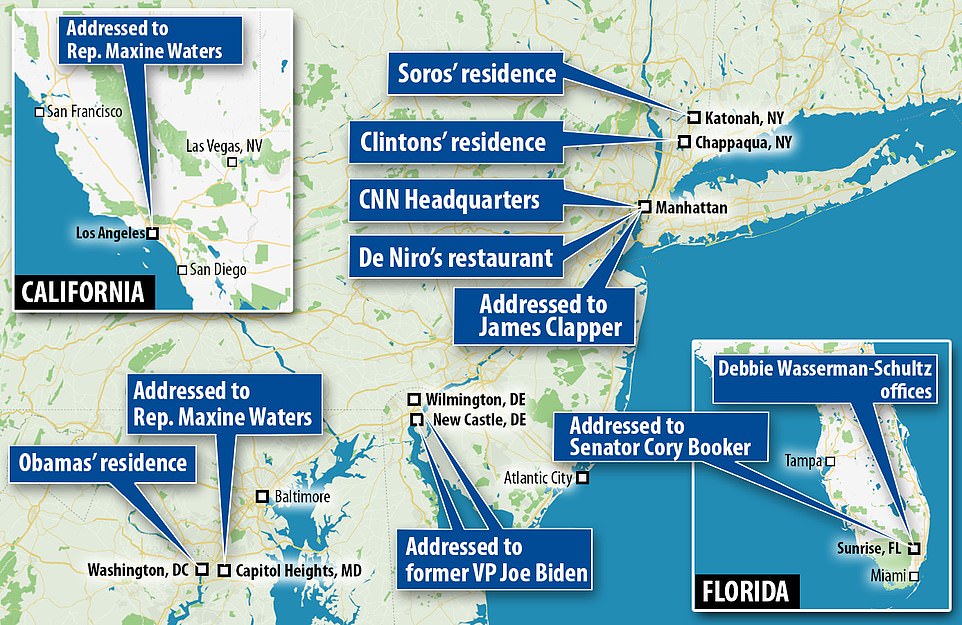 A photo of the package showed that it matched notable characteristics of the previous mail bombs, none of which have exploded.

Clapper joined CNN as a contributor after stepping down as the nation’s most senior intelligence official last year.

‘At least they got the correct spelling of my name and they got the right network,’ Clapper said in remarks to CNN, referring to a mail bomb sent to CNN earlier this week and addressed to ‘John Brenan’.

John Brennan, a former CIA director, is a contributor for MSNBC.

‘This is definitely domestic terrorism, no question about it in my mind,’ Clapper said in an interview with the cable network. ‘This is not going to silence the administration´s critics.’

Like the other targets in the mail bomb spree, Clapper has been harshly critical of Trump. In a speech last year, he said that Trump was guilty of ‘ignorance or disrespect’. 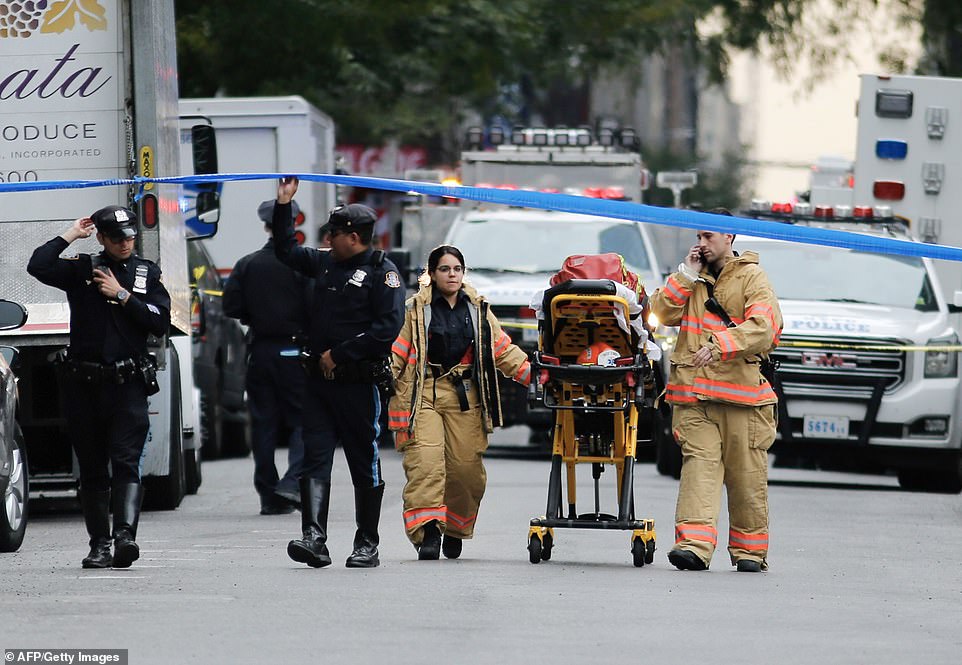 First respondents are seen on the scene where suspicious package was found in Midtown. There were no reports of injuries and the stretcher is believed to be a precaution 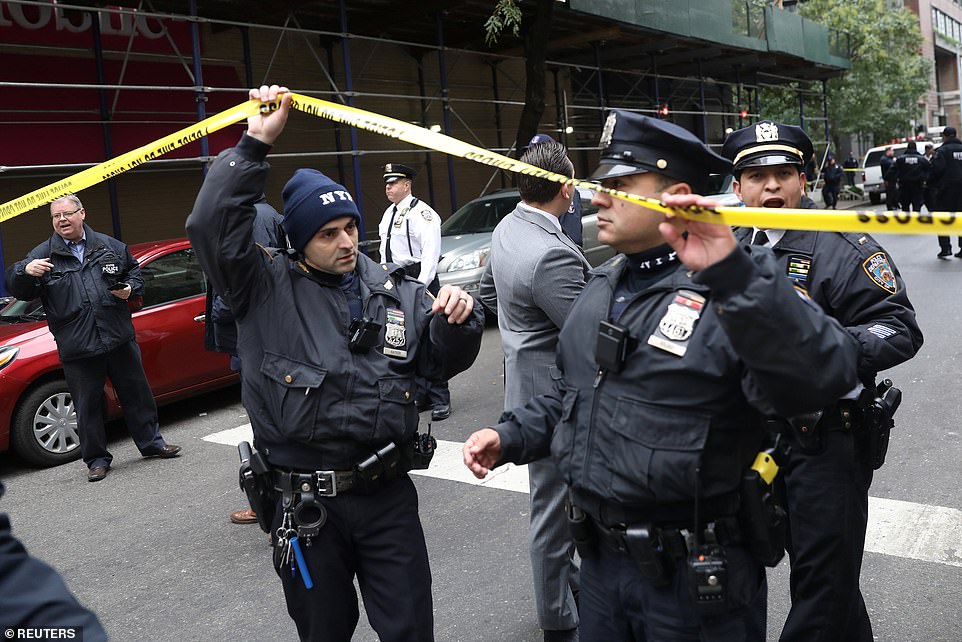 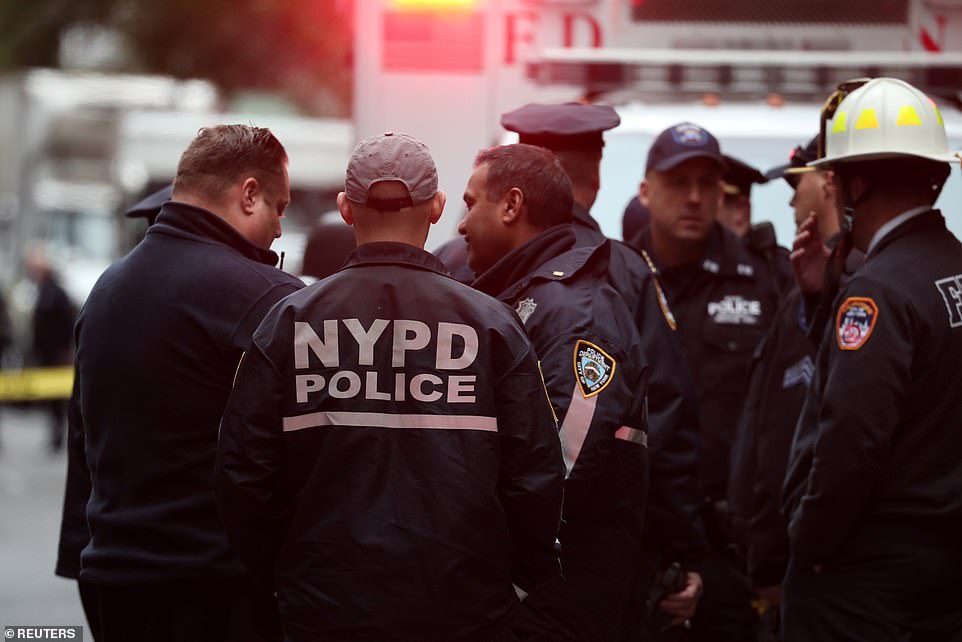 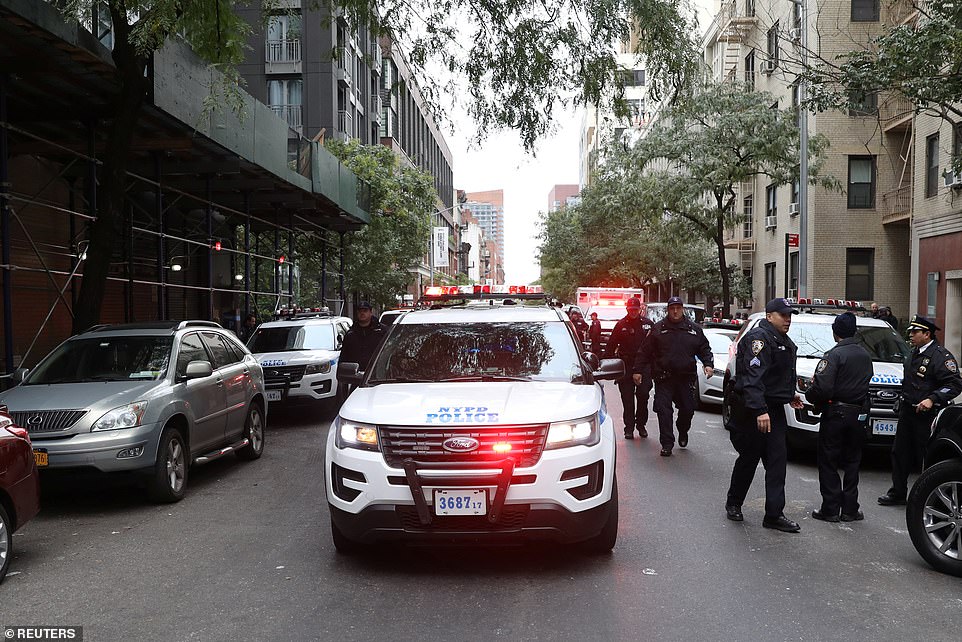 The package intercepted on Friday was addressed to Clapper care of CNN, but was spotted by postal inspectors at a sorting facility before delivery.

The NYPD bomb squad was on scene at the postal facility at West 52nd Street and 8th Avenue on Friday morning.

The NYPD’s Total Containment Vessel was spotted at the scene by about 9.30am.

Streets in the area were closed off and postal workers were seen waiting on the sidewalks after the facility was evacuated.

The containment vehicle departed the area at 10am transporting the suspected bomb to a secure police facility in Rodman’s Neck in the Bronx. 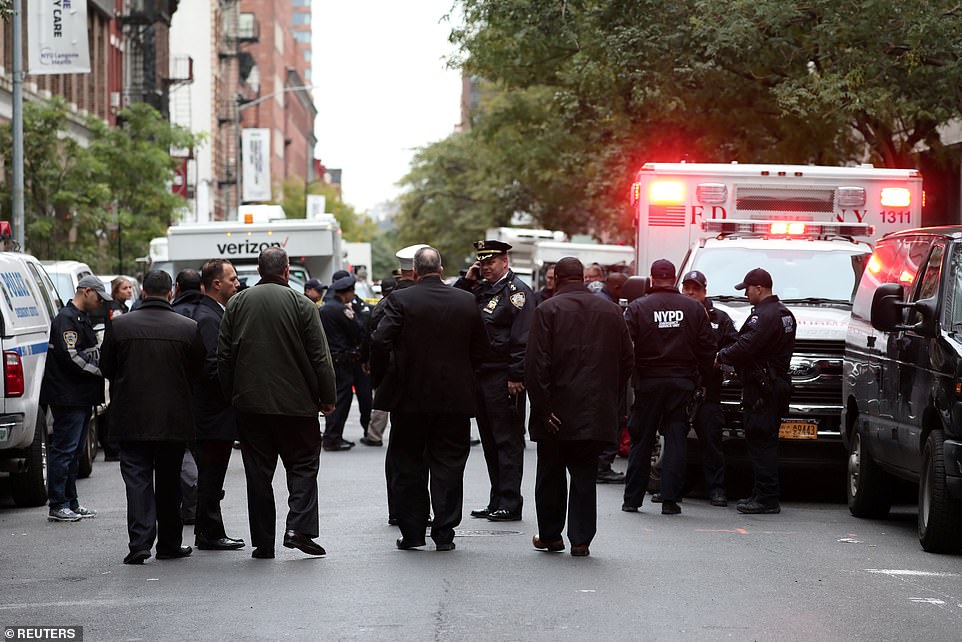 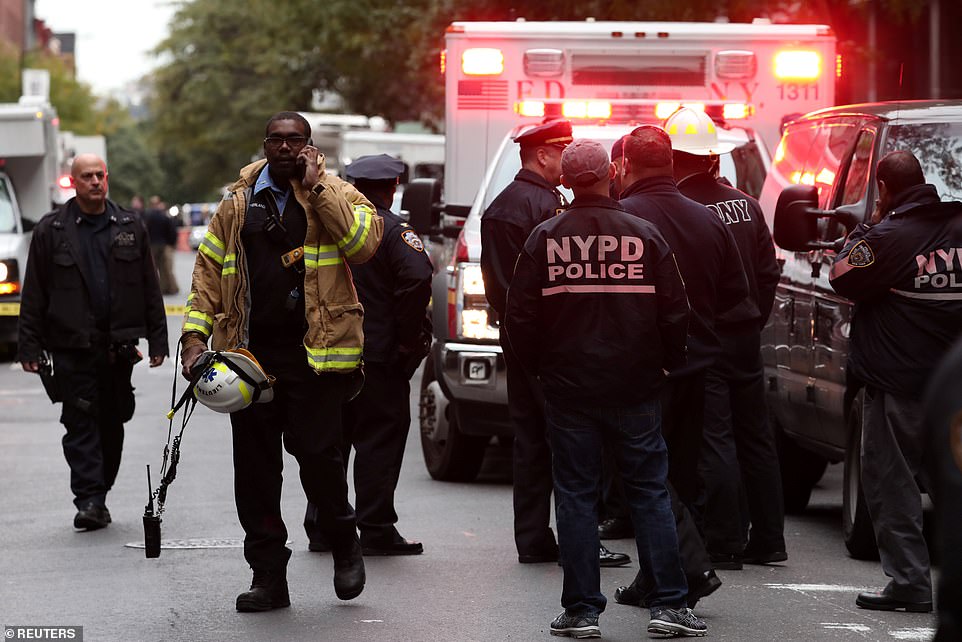 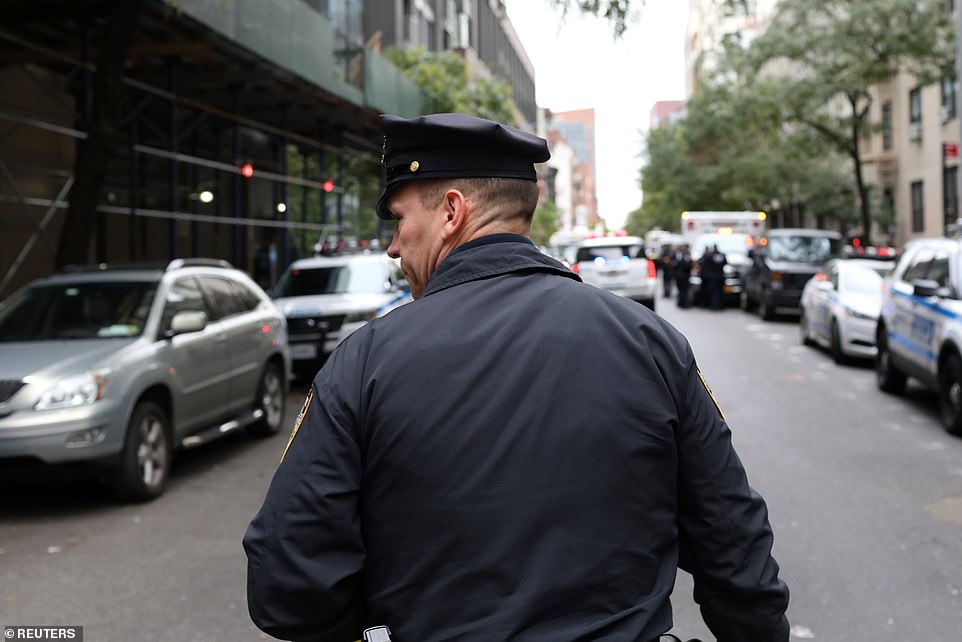 Investigators believe that all of the suspicious packages were sorted at the facility, which processes mail regionally in South Florida.

It was at the Opa-Locka facility that the 11th bomb was discovered, addressed to Senator Booker.

Booker is a Democrat from New Jersey. Like Clapper and the other targets of the mail bombs in the recent spree, he is an outspoken critic of Trump.

The identity and motives of the bomber have not been revealed, however, with the FBI saying it is pursuing the case as the agency’s highest priority.

No one has claimed responsibility for the bombs. 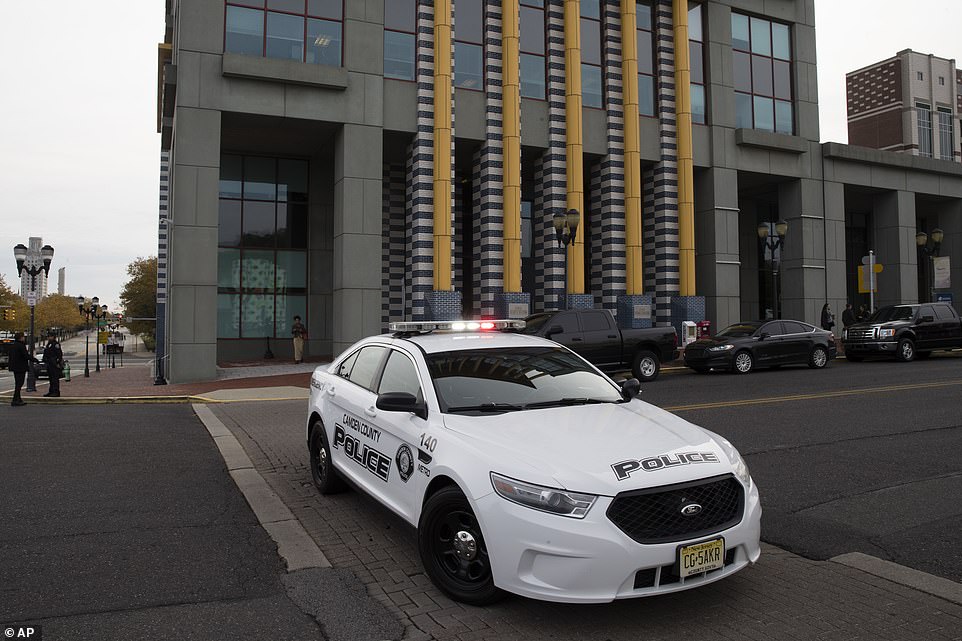 A police car sits outside New Jersey Democratic Senator Cory Booker’s office in Camden, New Jersey on Friday. The FBI says a suspicious package addressed to Booker has been recovered in Florida and is similar in appearance to recent mail bombs 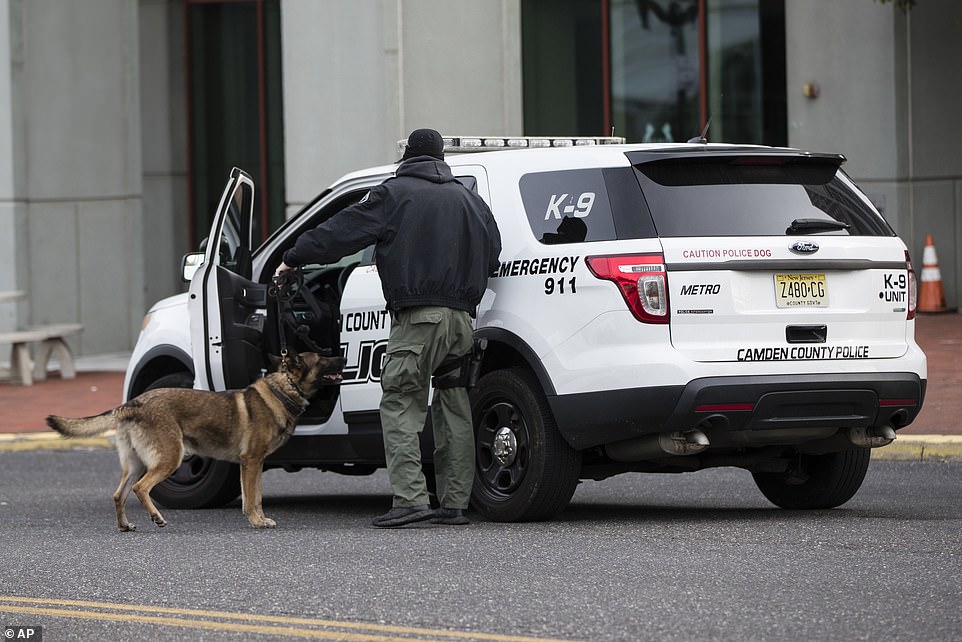 A police dog is loaded into an SUV outside New Jersey Democratic Senator Cory Booker’s office in Camden, New Jersey 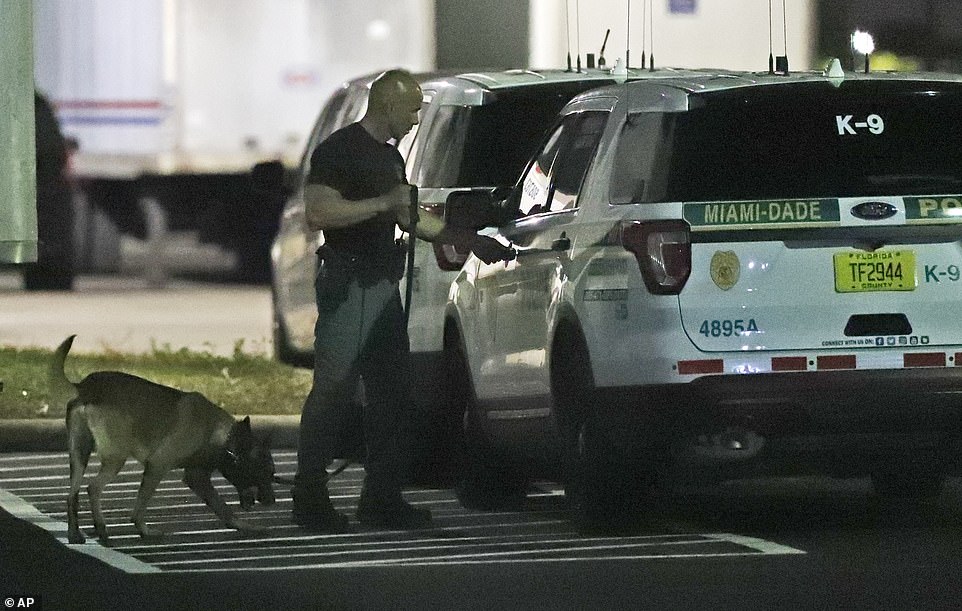 A police officer and dog are shown outside a postal facility on Thursday in Opa-locka, Florida. The search uncovered a suspicious package addressed to Senator Cory Booker

Senator Mark Warner, the top Democrat on the Senate Intelligence Committee, told MSNBC on Friday that the mail bombs were stoking fear across the county and that U.S. leaders, including Trump, must reassure the public.

Elected officials and others need to say that this is not who we are as a country, Warner said. ‘That would be a heck of a lot stronger if that message also came from the White House.’

U.S. Homeland Security Secretary Kirstjen Nielsen said that Florida appeared to be the starting point for at least some of the bomb shipments.

‘Some of the packages went through the mail. They originated, some of them, from Florida,’ she said during an interview with Fox News Channel on Thursday.

‘I am confident that this person or people will be brought to justice.’