Suspicious device made of ‘matches, a lighter and a gas cylinder’ is discovered by a cleaner on a plane at Perth Airport

A suspicious contraption reportedly consisting of a gas cylinder, matches and a lighter has been found on an Australian plane.

The shocking discovery was made on September 16 by a cleaner after an international flight landed at Perth Airport.

Australian Federal Police have launched a full investigation into the device, which they have described as ‘unusual’.

A device consisting of a gas cylinder, matches and a lighter was found on board an international flight which had landed at Perth Airport (pictured) a fortnight ago

The device was made of a gas cylinder, matches and a lighter, and was stowed underneath a passenger’s seat, a source has claimed to Perth Now.

‘They (cleaners) found matches and a lighter strapped to a mini gas bottle taped under a seat,’ the source said.

But police are yet to confirm whether the device was the explosive described by the source, saying it’s currently under investigation but wasn’t dangerous.

‘The item was assessed by AFP members and determined to pose no threat to the safe operation of the aircraft,’ a spokesperson said.

Perth Airport confirmed that the device was on the plane, but couldn’t provide further details since the matter is being investigated.

‘At Perth Airport the safety and security of the travelling public is our number one priority,’ a spokesman said. 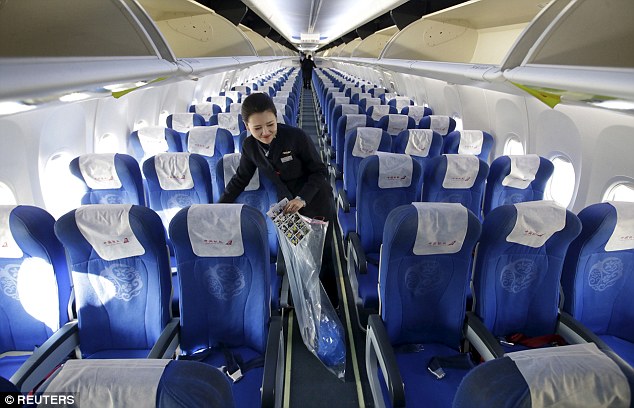 The device was found by a cleaner, who says they found it underneath a seat (stock image)