Royals fans have launched a global campaign to plant 10,000 trees in tribute to the Duke and Duchess of Sussex.

Twitter handle @SussexGtForest penned: ‘In celebration of World Children’s Day today, and ahead of U.K. National Tree Week, join online supporters of the Duchess Of Sussex, and Prince Harry, Duke of Sussex, in the #SussexGreatForest campaign to plant 10,000 trees worldwide.’

And fans as far as Canada, Jamaica and South Africa have all got on board with the initiative.

‘Happy to share my small contribution to this wonderful initiative. I get to help plant 12 trees for my country Philippines (4 trees for Harry, 4 trees for Meghan and 4 trees for Archie),’ wrote one, while a second added:

‘My husband and I got engaged in Kenya, and planted a coconut tree in the grounds of our hotel in Malindi to commemorate. With that memory, and the wonderful initiative, this tree is planted with much love.’

Sussex supporters came up with the idea following Prince Harry’s trip to Africa, where he put global conservation at the forefront of his visit, according to Harper’s Bazaar.

During the trip, the royal was photographed speaking to a child as he joined school children in a tree planting event in Chobe National Park, Kasane in Botswana on 26 September 2019.

Fans have since decided to honour their commitment to conservation and safeguarding the environment for the next generation.

The project has also chosen four charities for members of the public to plant trees in the royals’ names – including UK-based Tree Sisters, which aims to make forest restoration as fundamental to people as consumption currently is, and One Tree Planted, which focuses on planting trees around the world. 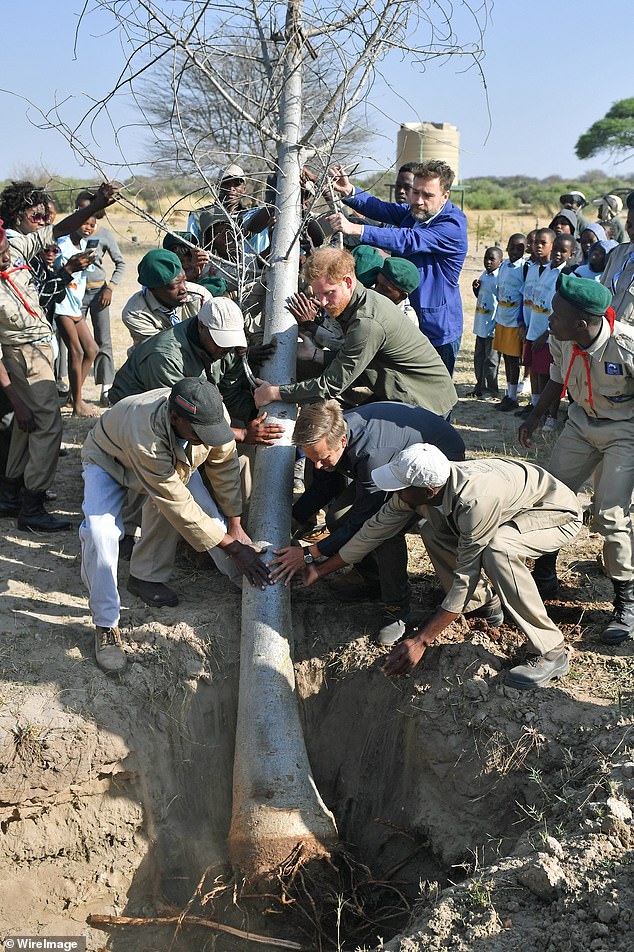 One Sussex supporter told how she planted a coconut in Kenya, while another planted a nordmann and an apple tree in France

Others include the International Tree Foundation, which works with communities in Africa and the UK to protect, regenerate and cultivate trees and forests, and The Green Belt Movement, which empowers communities, particularly women, to conserve the environment and improve livelihoods.

Alternatively, they suggest supporters can plant their own and advise if it’s too cold to plant in the ground, to do so in a pot and transfer before 6 May 2020 – which will mark Archie’s first birthday.

And many who have already got involved in the action were quick to contribute to the thread with their success stories via the hashtag SussexGreatForest.

‘I planted my tree in my side garden at home in Yorkshire. It’s a pine tree, something associated with celebration i.e Christmas, so l thought it would be a good choice to celebrate Harry and Meghan. Get planting people – every tree helps!’ encouraged one, while a second wrote:

‘How exciting, will be planting 10 (or more) cashew nut trees in my hometown in Nigeria.’

A third added: ‘I planted a Nordmann tree and an apple tree last week in Alsace,’ wrote one. ‘These trees were planted in our neighbourhood,’ while a fourth penned:

‘I have made my second donation as part of the #SussexGreatForest campaign. I may not be the wealthiest, but I will ALWAYS do my part in bettering this world. Please plant a tree, donate, or both!’