A swan caused havoc on one of the busiest motorways in the country today when it decided to take a rest in the fast lane.

The large bird was sat facing oncoming traffic on the northbound side of the M6 near Walsall, West Midlands, as millions of motorists took to the roads.

CCTV cameras showed the swan sitting in the fast lane as other vehicles speed past it on Good Friday.

Video footage showed the animal staring as motorists when they drove past and it eventually flew away when two lorry drivers stopped and tried to rescue it.

The swan was sat facing oncoming traffic on the northbound side of the M6 near Walsall, West Midlands (pictured) 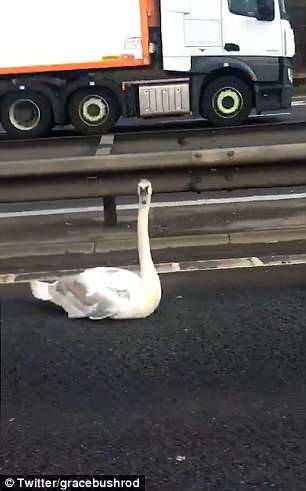 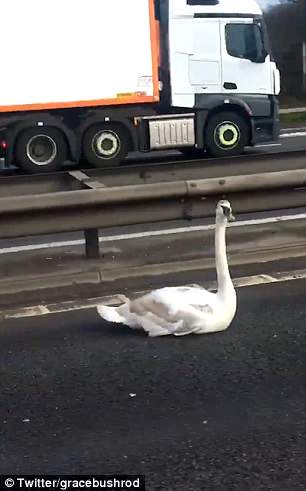 A rolling roadblock was put in place, but all lanes were reopened at around 10.25am.

Highways England tweeted: ‘Lane 3 closed #M6 northbound within J8 (#M5) due to a swan that is sat in the carriageway.

‘@HighwaysWMIDS are travelling to assist and safely remove, if travelling pls approach the area with caution.

‘After a brief rolling road block by @HighwaysWMIDS the swan was politely encouraged to move from #M6 northbound within J8 (#M5). 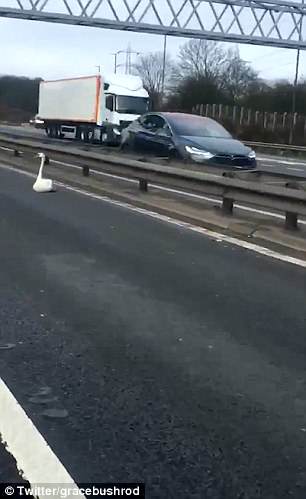 A video was recorded which showed the swan sitting on the M6 near Walsall, West Midlands

‘All lanes are NOW OPEN, thanks for your patience. Safe travels today.’

‘Despite the signals being set, we still have a number drivers contravening the signals heading straight for the stranded Swan.’

They then added: ‘Good news about the Swan. It was obviously having a rest. It flew off after 2 HGV drivers decided to stop the traffic and attempt a rescue.

‘I suppose they’ve gone off now with feathers in their caps.’