With each passing minute, the noise got louder. On each side of the ground, they chanted and sang and, for the first time this season, showed unity.

The Liberty Stadium has not offered Swansea much freedom in this most testing campaign but, when it mattered, the locals came together. The outcome, against the odds, was a performance to give hope that, perhaps, all is not lost.

Liverpool arrived in South Wales on the back of an 18-match unbeaten run but they left in a state of shock, flattened by a goal from the unlikely source of Alfie Mawson and their hopes to put distance between themselves and Tottenham and Arsenal punctured. 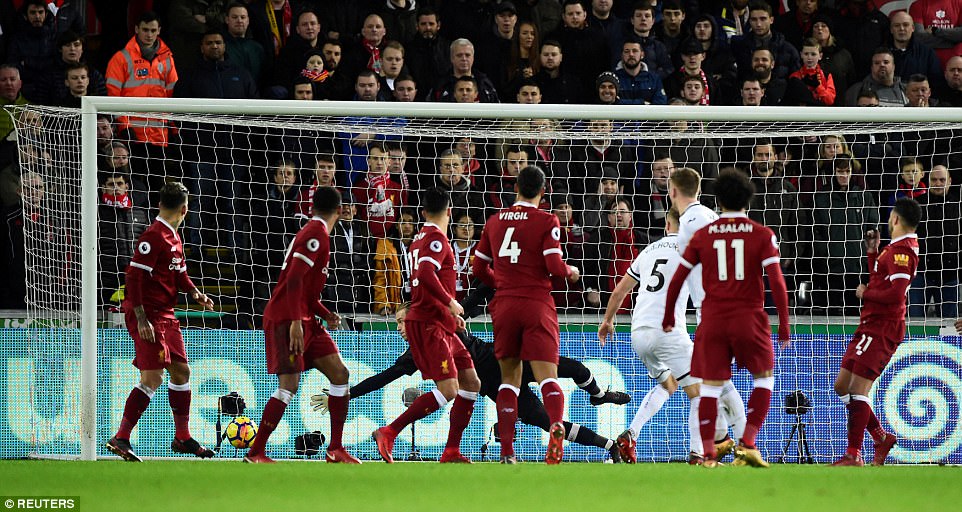 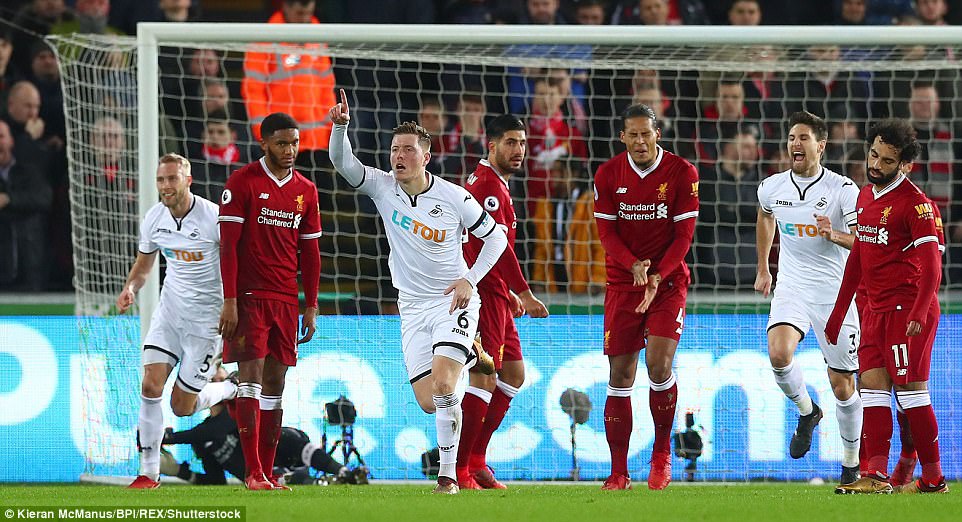 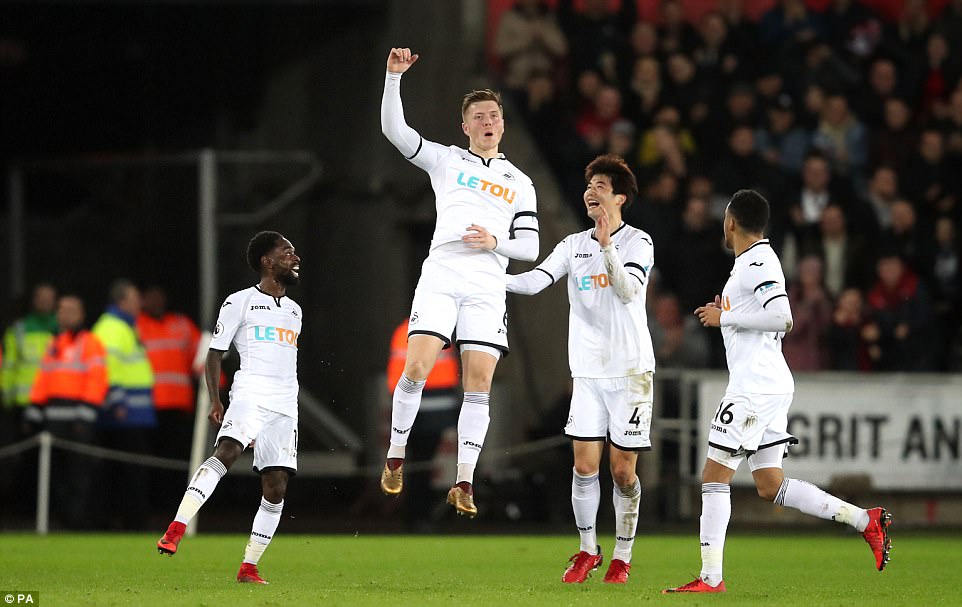 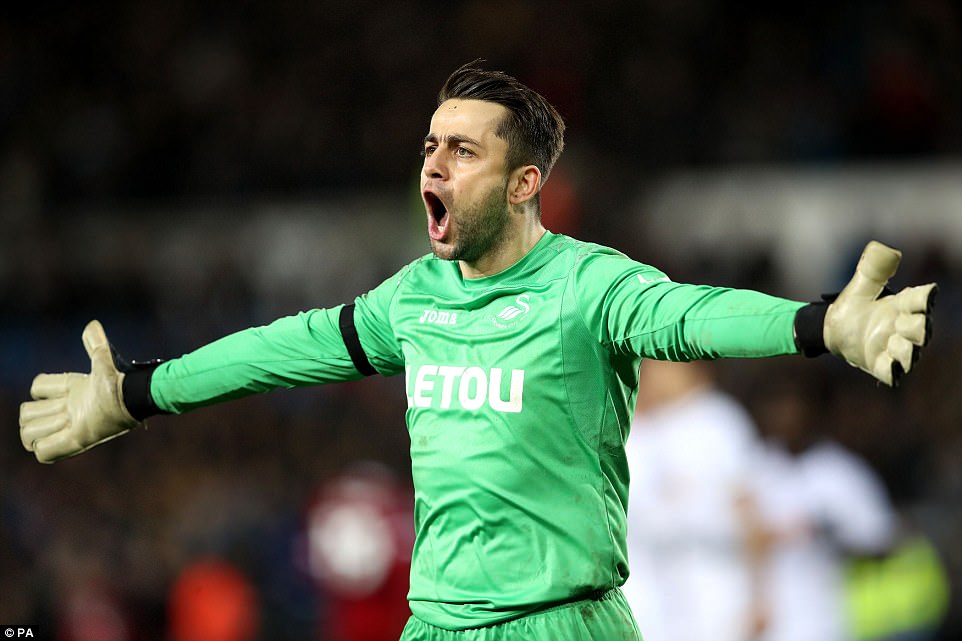 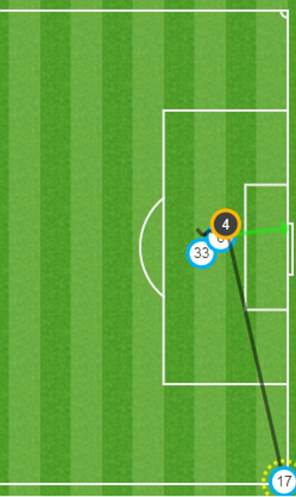 How Alfie Mawson put Swansea ahead against Liverpool.CLICK HERE for more from our match zone service

They could have no complaints. This was a performance not seen since the anaemic days of autumn, a display that left Jurgen Klopp frothing with frustration. Swansea’s stoicism and resilience drove him to distraction.

When these sides met on Boxing Day, there was an air of inevitability about the outcome even before the game started. Swansea travelled to Merseyside on a low ebb and the performance they mustered was spiritless and shambolic. Liverpool didn’t need to be at their best to thrash them 5-0.

It was evident from an early stage here, though, that Klopp’s side were going to have to work much harder to extend their unbeaten run. Swansea were organised and, no doubt, aware last season’s great escape began with a victory, against the odds, over Liverpool at Anfield on January 21.

What Carvalhal needed was maximum concentration from his players and the new manager, as he tried to impart his orders, was a persistent, fidgeting presence on the touchline, demanding they stay compact to keep the door closed to Liverpool. 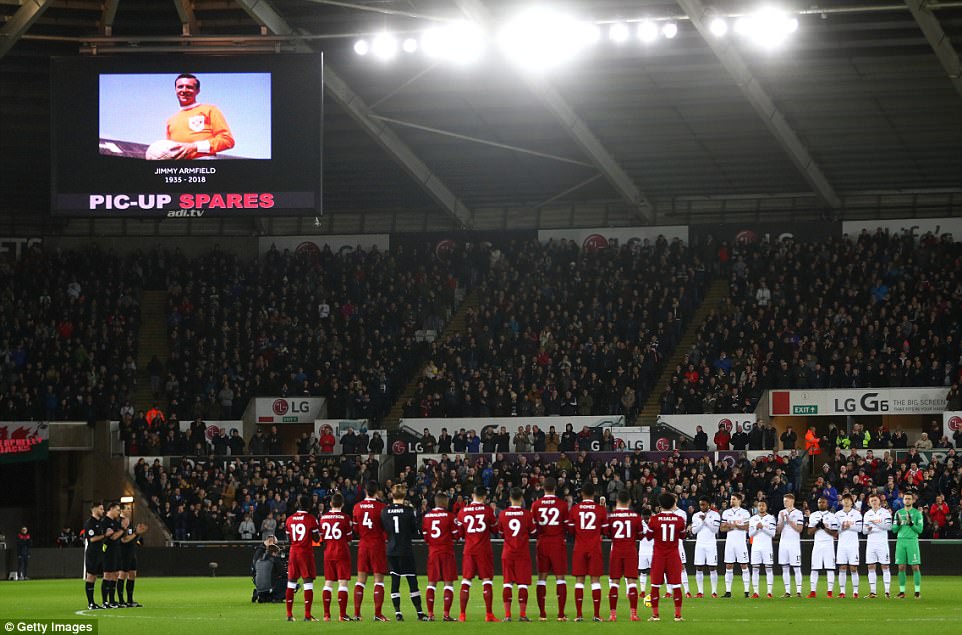 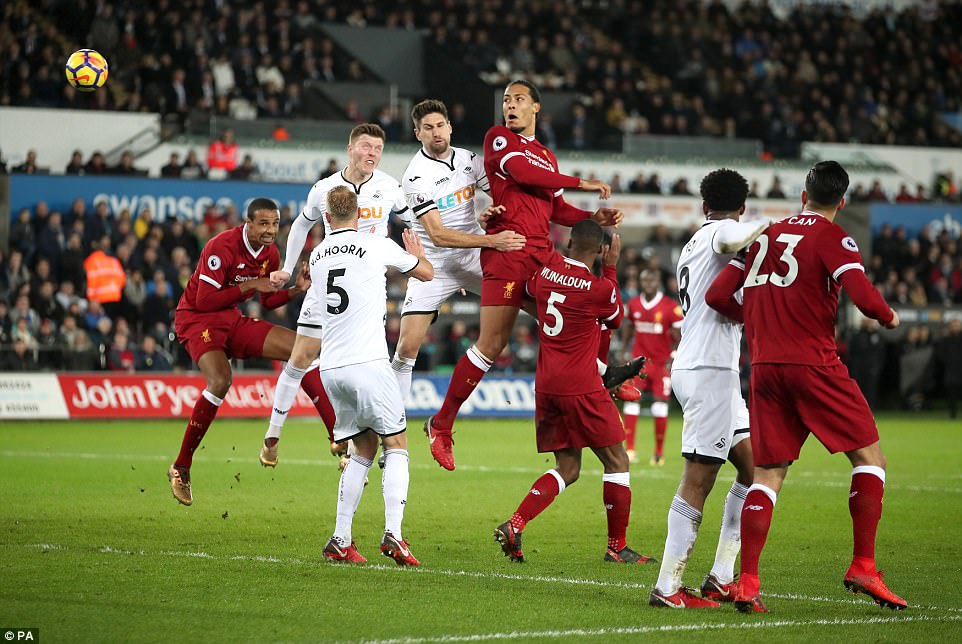 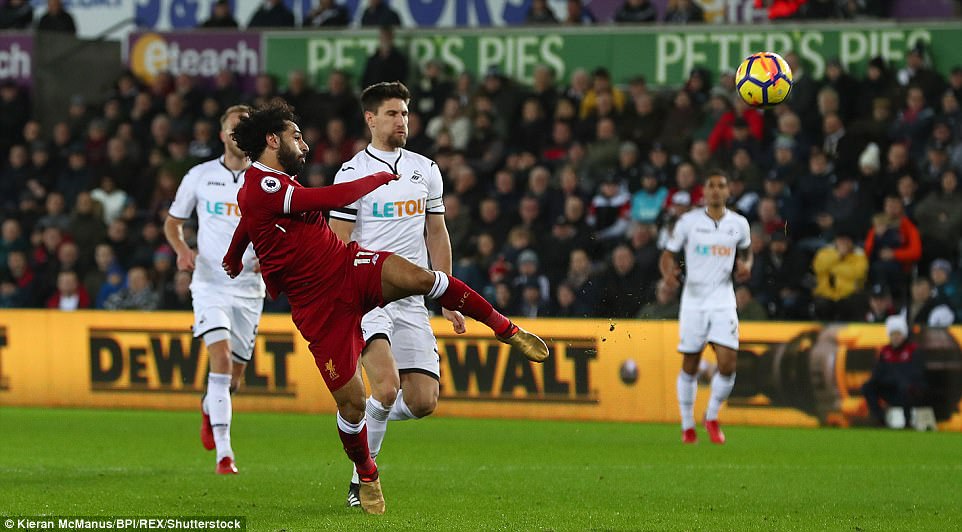 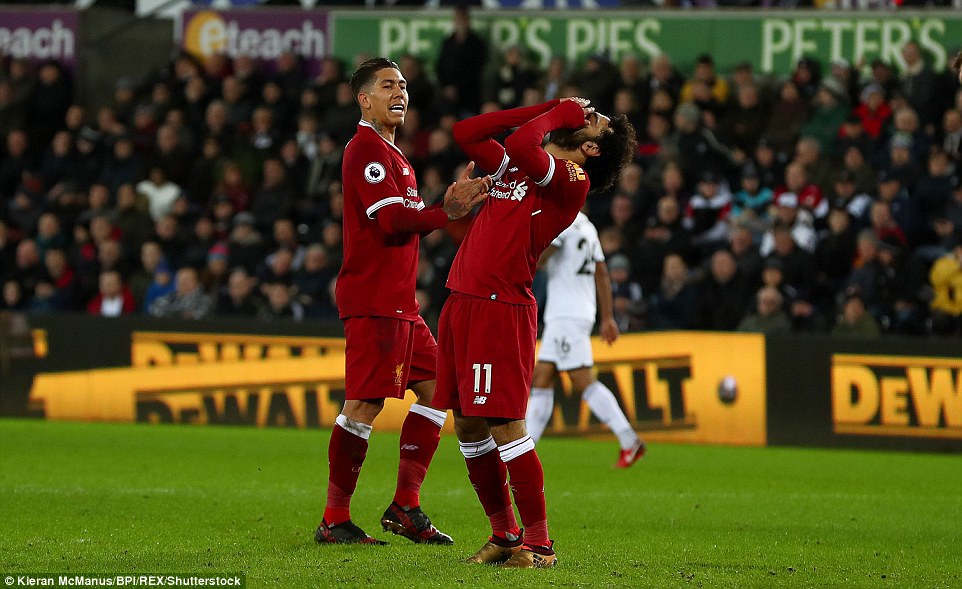 He knew Liverpool were going to dominate possession. What he didn’t want was any gifts being handed out and, in the opening half, the division’s basement team stuck to the letter of Carvalhal’s law, denying space and snapping into tackles, gradually regaining the trust of their supporters.

Liverpool, by contrast, lacked the ingenuity and speed that saw them torpedo Manchester City’s unbeaten run eight days earlier. This, arguably, was as ineffective as Mo Salah, Roberto Firmino and Sadio Mane have been all season, with not one of them managing to get a shot on target.

The closest Liverpool came to finding a way through was when Alex Oxlade-Chamberlain whipped a corner in the 23rd minute onto the head of Van Dijk, who had climbed above Fernandez but could not direct the ball into the corner of Fabianski’s net.

Van Dijk, starting his first Premier League game for Liverpool, had looked all class. He was efficient with his clearances, crisp with his passing and his huge physical presence screamed authority; he missed nothing in the air, either, so it was a shock when another header led to the opening goal. 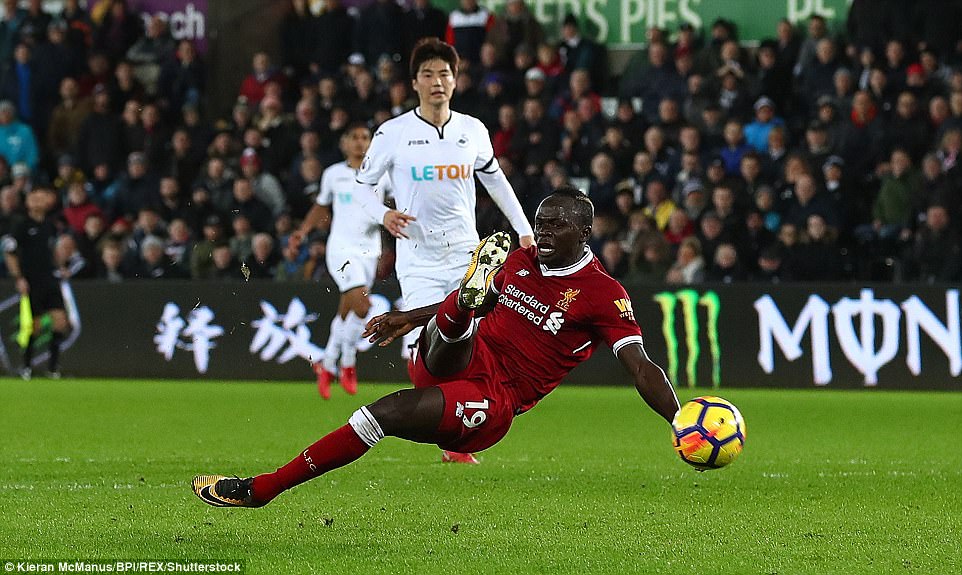 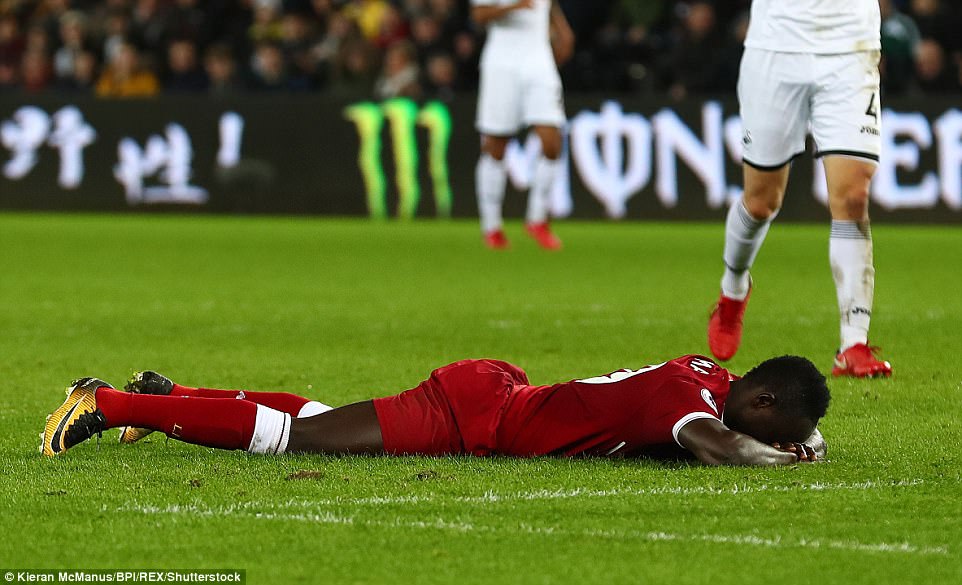 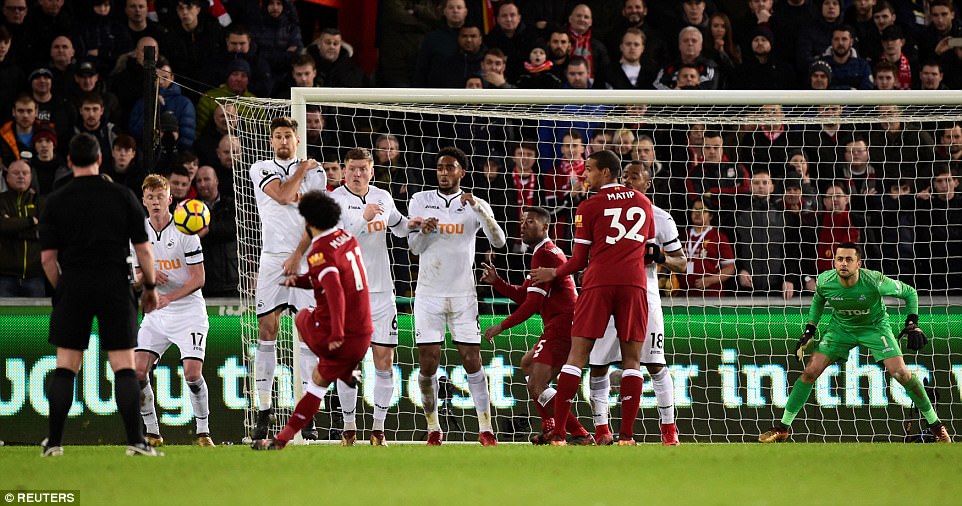 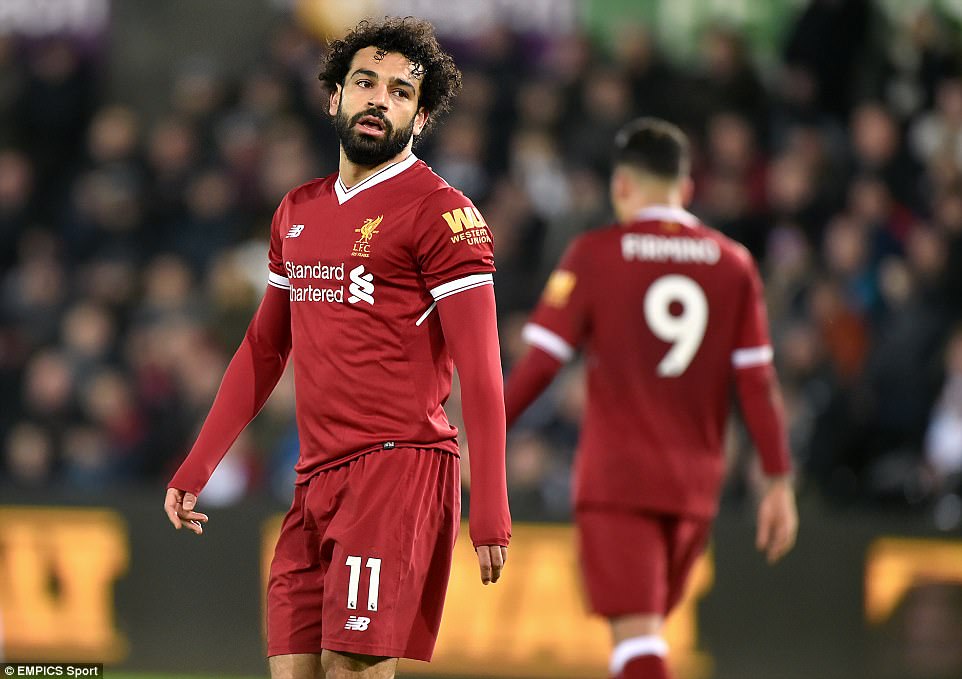 Swansea had struggled to create a clear opportunity but in the 40th minute they took the lead. Van Dijk met Martin Olsson’s corner but his header bounced off Federico Fernandez’s legs and Mawson, who had been left unmarked, swept in a crisp finish.

They have been looking to catch a break like this for some time but what Fernandez could not have expected was his nose being broken in the celebrations: as he hugged Mawson, Mike Van Der Hoorn leapt onto his back, jolting the captain’s face into Mawson. It left him requiring lengthy treatment.

His absence from the playing field, as Swansea’s medical staff sprayed and bandaged the wound, could have had costly ramifications but in a quick break in first half injury time, Mane fired wide when charging into the space Fernandez would have been to meet a cross from Salah. 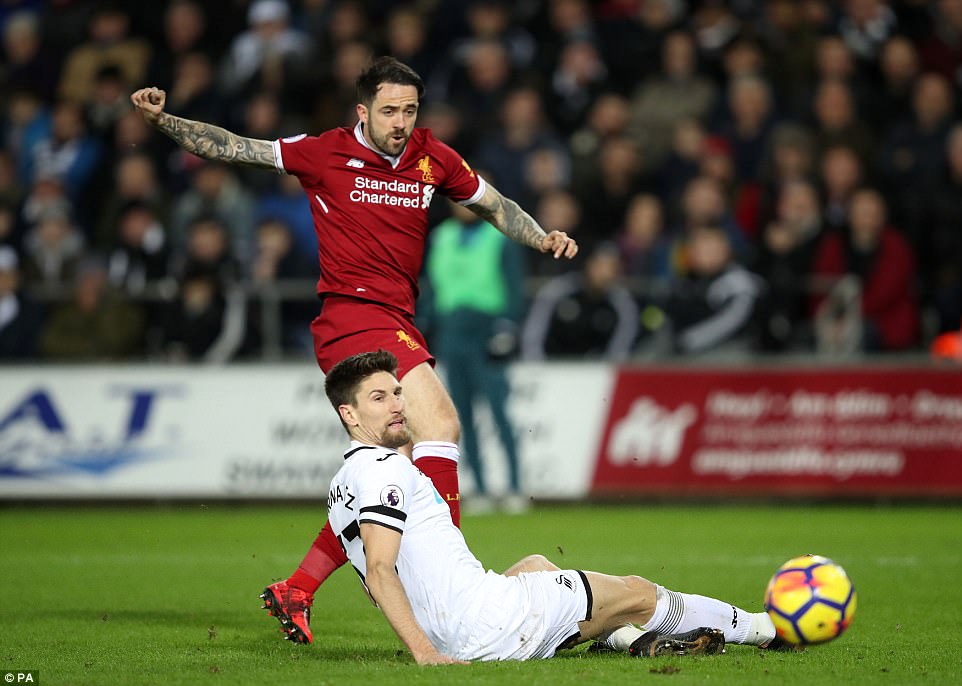 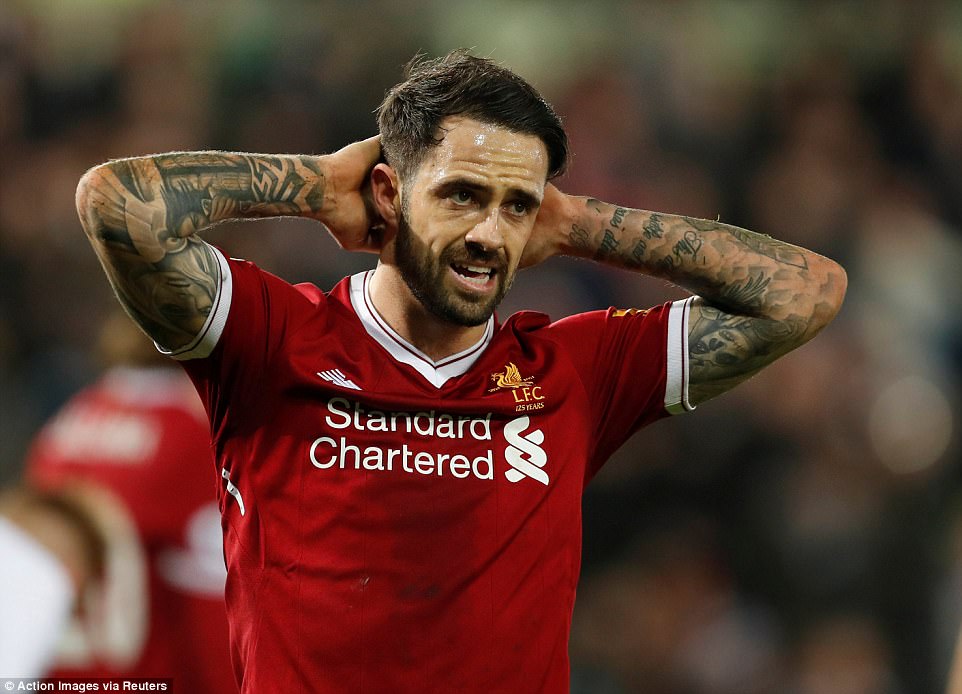 Klopp sent Liverpool out early for the second half and, soon enough, his anxiety about the deficit they had to retrieve could be seen in his actions: pointing, whistling, bickering with the fourth official and assistant referee when things failed to go his side’s way.

This was not going to be an easy task. Carvalhal had sent Swansea out to stifle and frustrate and Liverpool were faced with the task of trying to pass their way through a white wall that had been built 18 yards in front of goal.

Having failed to keep a Premier League clean sheet since December 9, nullifying the second highest scorers in the country was going to take a huge effort but it was one which Swansea were keen to undertake, the five-man defence giving Liverpool’s attack no space to breath. 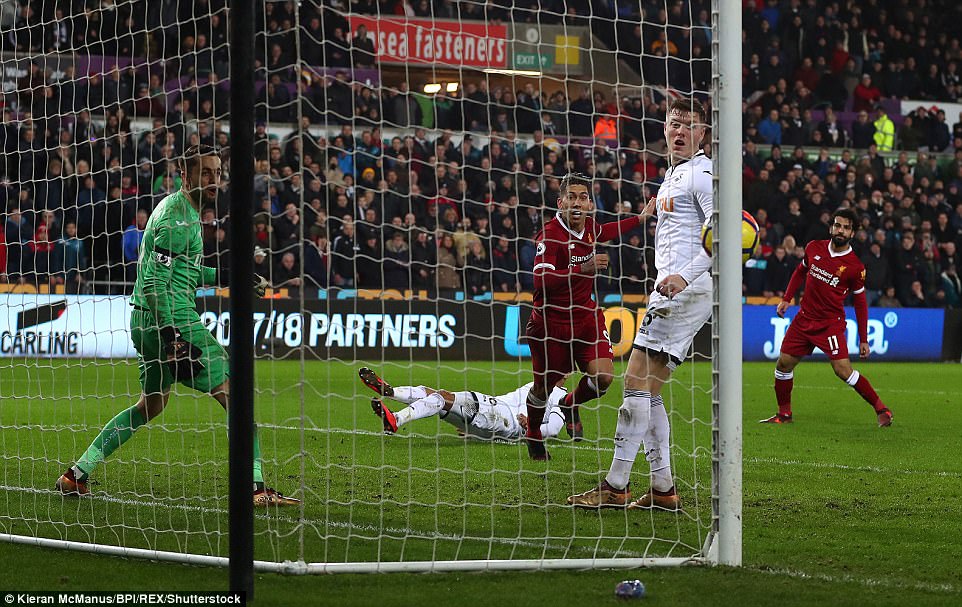 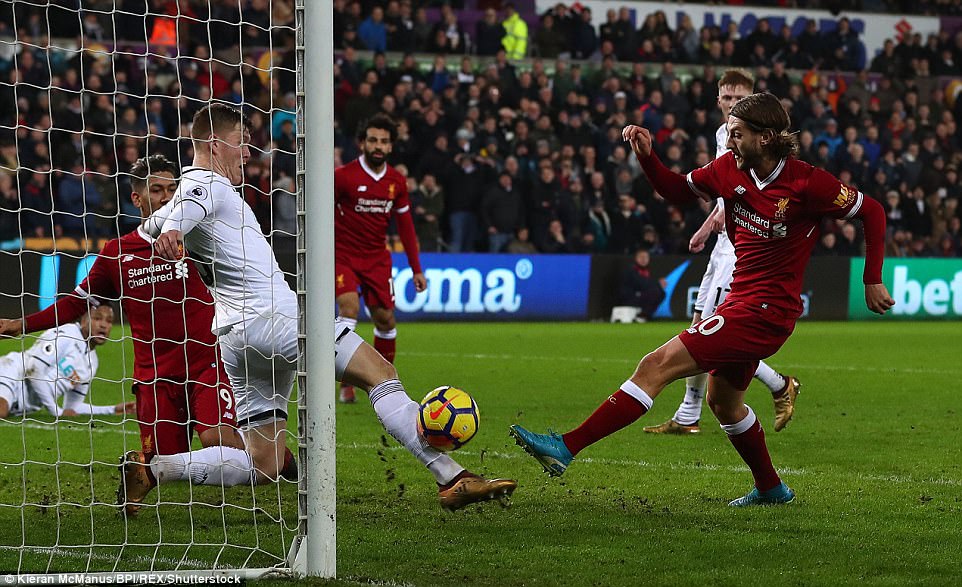 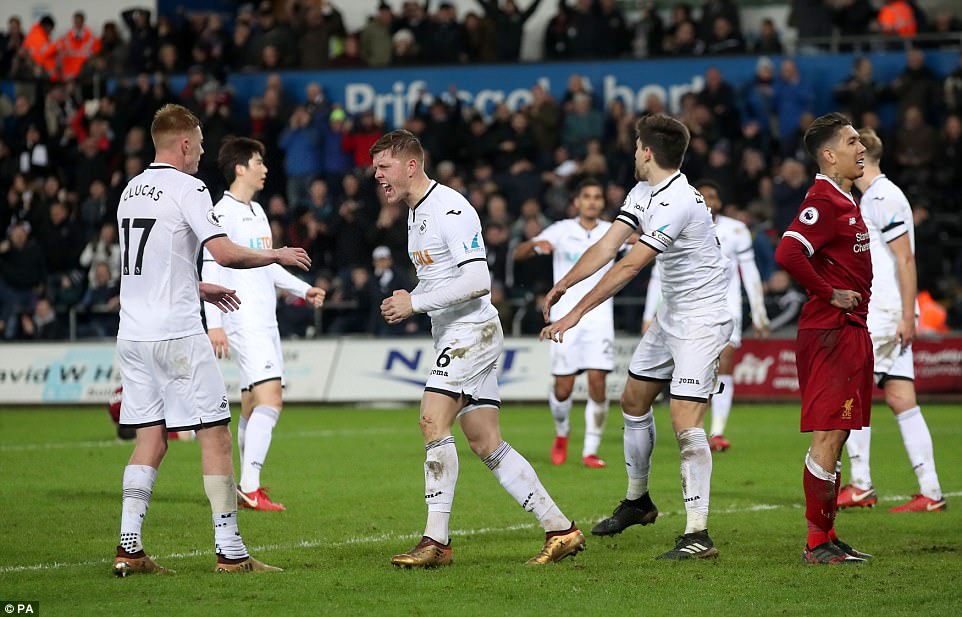 For all that Liverpool passed and probed, they kept being pushed down blind alleys. Carvalhal, for all his initially jumpiness, exuded calm as he watched feet being put in and heads thrown in the way. It said everything a free-kick from Salah, superbly saved by Fabianski, was one of Liverpool’s biggest chances.

The Reds had a chance to rescue a point in the dying seconds but Firmino hit the post before Adam Lallana blazed over the bar with the goal at his mercy.

You could see there and then it was going to be one of those nights. And the more Liverpool failed to find a way through, the noisier the home crowd became. They enjoyed this one. To clamber away from peril, they need many more like it. 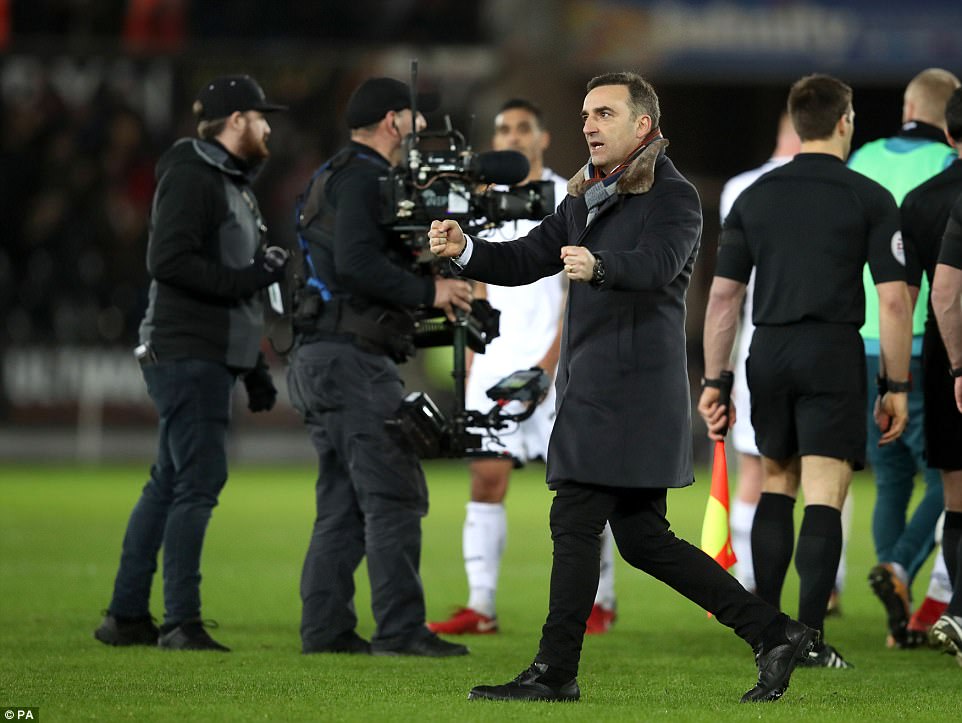 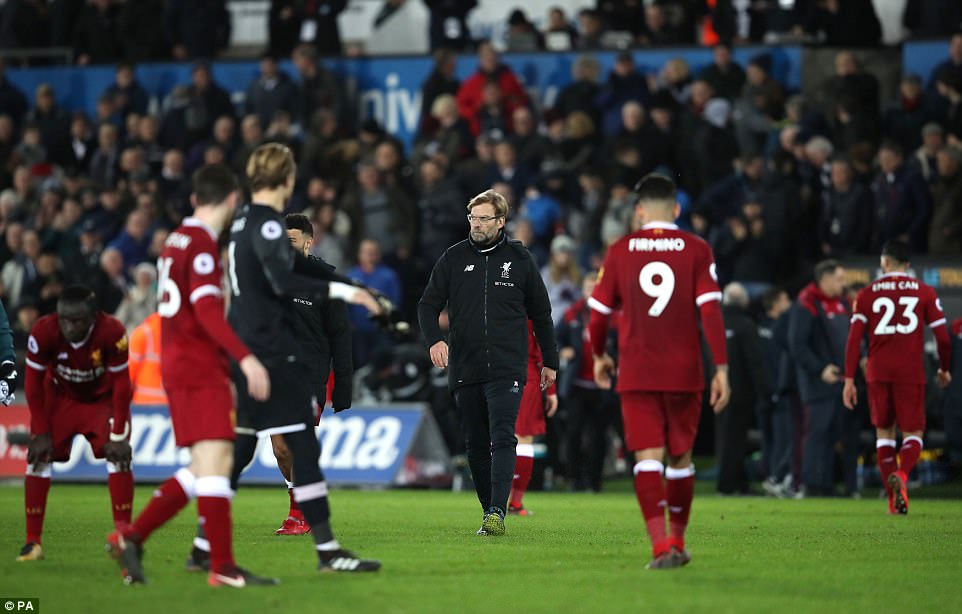