Epidemiologist Anders Wallensten said ‘voluntary restrictions’ could be ‘maintained for a longer period’ than the compulsory lockdowns which most of Europe has imposed.

People in Sweden accepted the ‘reasonable’ rules without being forced to obey them, he said, adding that a total lockdown would cause more economic damage.

The surge in deaths is likely to be caused by delays in collecting figures from the weekend, a problem which many countries have experienced.

Sweden’s figures have fluctuated wildly over the last two weeks, with implausibly low figures released on Sundays and Mondays followed by a surge on Tuesdays.

This graph shows the daily number of deaths announced by Sweden’s public health agency. The figure has fluctuated wildly because of delays in reporting weekend figures 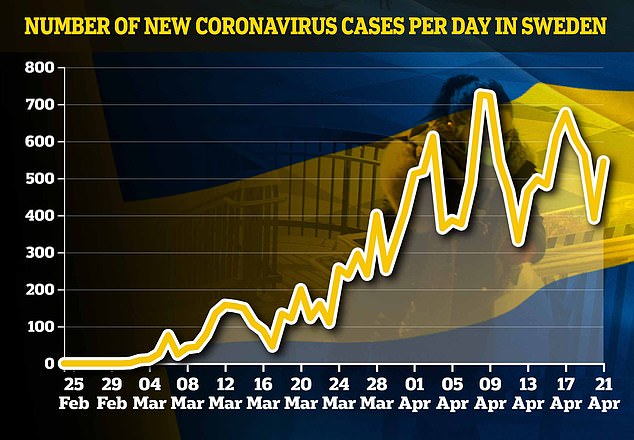 This chart shows the daily number of cases in Sweden. Today’s figure of 545 is a significant increase from yesterday’s 392, possibly also caused by a weekend backlog

The agency now says there were at least 94 deaths over the weekend, but not all the deaths have been attributed to a particular day.

Still, today’s increase of 185 is the largest yet, even compared to previous post-weekend backlogs, and brings the total from 1,580 to 1,765.

The same delays in reporting were seen over the Easter weekend, when daily updates showed only 49 new deaths from Saturday to Monday.

In fact, the agency now attributes at least 242 deaths to those three days, many of which were not revealed until later.

Wallensten, the deputy state epidemiologist, today launched the latest defence of a ‘voluntary’ policy which Sweden says is better in the long term.

Sweden has emphasised taking personal responsibility for social distancing measures rather than enforcing a lockdown which cannot last forever.

Wallensten also suggested that the peak may already have been reached, despite the impression created by the surge in figures.

Health experts believe that by May 1, as many as one-third of people in the Stockholm area may already have had the virus, possibly limiting its spread. 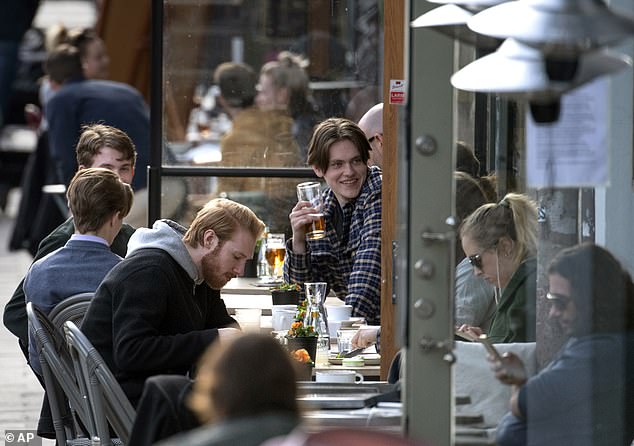 People sit outdoors at a restaurant in central Stockholm yesterday, in scenes which have not been replicated in most of Europe for several weeks 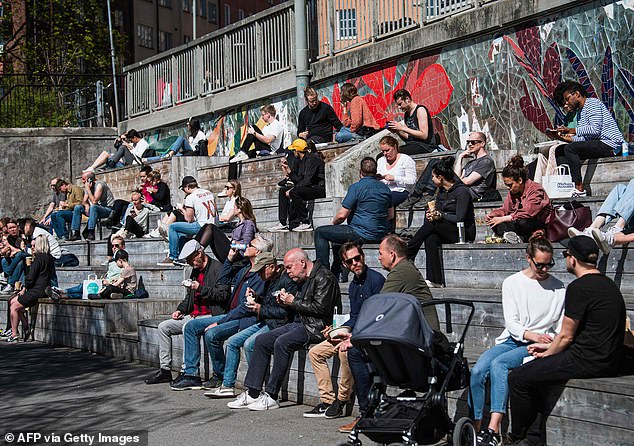 Sweden’s light touch to the crisis has sparked criticism from some scientists and academics and also caused alarm from some of its European neighbours.

Bars, restaurants and schools remain open while public gatherings of up to 50 people are still permissible in Sweden.

Sweden has far more deaths than Denmark, Norway and Finland, a difference that is not adequately explained by the size of their populations.

Finland has imposed checks on usually free-flowing border traffic at its frontier with Sweden, fearing the spread of the disease.

Sweden insists that its strategy is right because people need to ‘understand and accept’ measures over the long term rather than be forced into obeying them.

‘If everyone takes their responsibility, together we will overcome it,’ says Prime Minister Stefan Löfven.

Officials say that ‘people in Sweden have a high level of trust in government agencies’, meaning that advisory measures are widely followed.

‘In the current situation, people in Sweden are on the whole acting responsibly to reduce the spread of infection by, for example, restricting their social contacts,’ the government says.

Still, ministers have promised a huge increase in testing so that people in key roles such as police and healthcare personnel can be screened for the virus.

‘We are talking about testing and analysis capacity of 50,000, perhaps as many as 100,000, a week,’ health minister Lena Hallengren said.

So far almost 75,000 people have been tested in Sweden, Hallengren said last week. 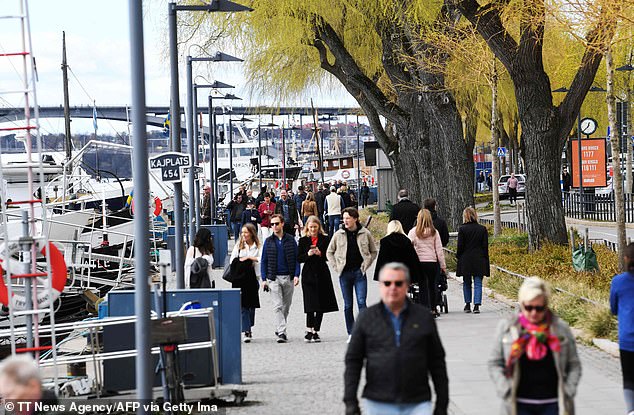 People walk on a pedestrian street in Stockholm on Sunday, in one of the few developed countries which has not closed bars and restaurants or eliminated public gatherings 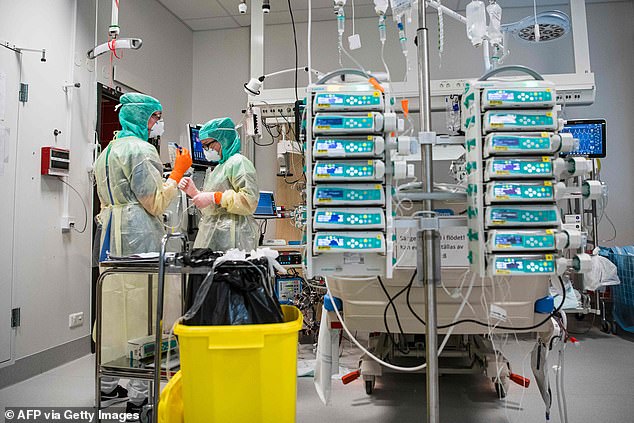 Nurses wearing masks and protective gear work in a ward at the Karolinska hospital in Solna on Sunday, with Sweden planning to ramp up testing for the coronavirus

The public health agency says minority groups including people born in Somalia, Iran, Iraq and the former Yugoslavia are over-represented among hospital patients.

State epidemiologist Anders Tegnell admitted that authorities were not sure why these groups were over-represented.

‘For us the main signal is really that we need to reach those groups better with different kinds of messages to help protect them,’ he said.

Stockholm accounts for more than 40 per cent of Sweden’s total cases and some poorer neighbourhoods have far more cases per capita than wealthier ones.

Those municipalities are home to several of Sweden’s ‘vulnerable areas,’ a term originally assigned by Swedish police to disadvantaged areas with high crime levels.

More than 550,000 people live in these 61 areas, according to a 2019 report commissioned by the local rights group the Global Village.

On average 74 per cent of people in these areas had immigrant backgrounds, meaning they or both their parents were born abroad. The national average was 24.9 percent.

Local authorities have therefore been stepping up information efforts in these areas, distributing material in 26 languages other than Swedish. These include Russian, Finnish, Arabic, Somali and Persian.