The first images of Sweden’s Icehotel for 2020 have been released – and it looks as amazing as ever.

Each year since 1989, the Icehotel has been built and rebuilt using just snow and ice in the village of Jukkasjarvi, 125 miles north of the Arctic Circle next to the shores of the Torne River.

This year, artists have created six one-of-a-kind suites in what is being billed Icehotel 31, which will stand until April 11, 2021 – when the hotel melts. A further six ice suites and a ‘frozen forest’ ceremony room – ‘for intimate weddings and other celebrations’ – have also been created in Icehotel 365, a permanent part of the property that is open all year round. What’s more, you can see it all via an interactive tour.

The first images of Sweden’s Icehotel for 2020 have been released. This one shows a suite called ‘Toybox’, which was designed by Wouter Biegelaar and Viktor Tsarski. It is located in Icehotel 365 – a permanent part of the hotel that is open all year round 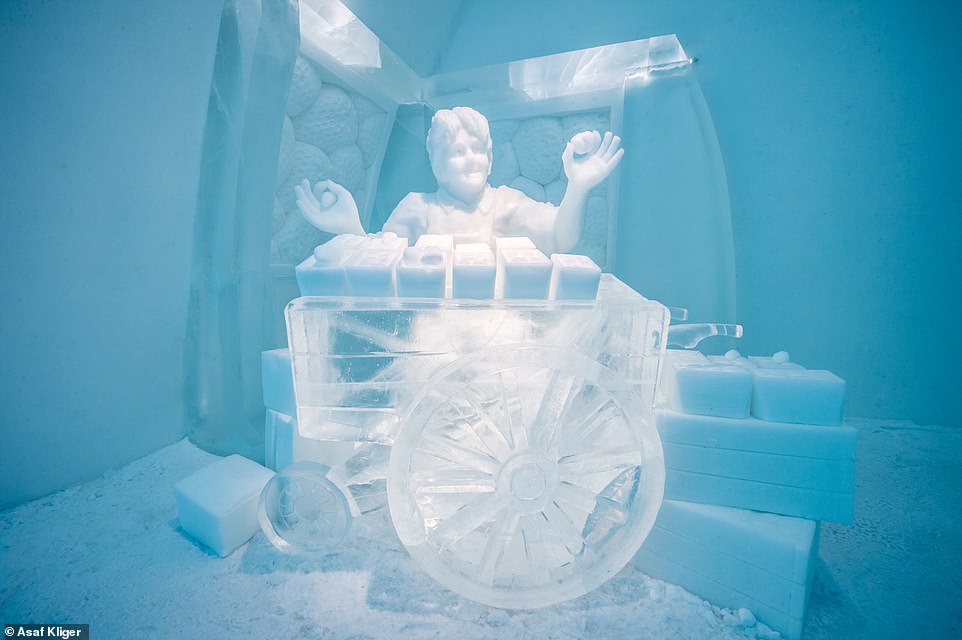 This amazing sculpture can be found in the Strawberry Room suite in Icehotel 31, which will stand until April 11, 2021 – when the hotel melts. This suite was designed by Petter Stordalen, Edith Van de Wetering and Wilfred Stijger 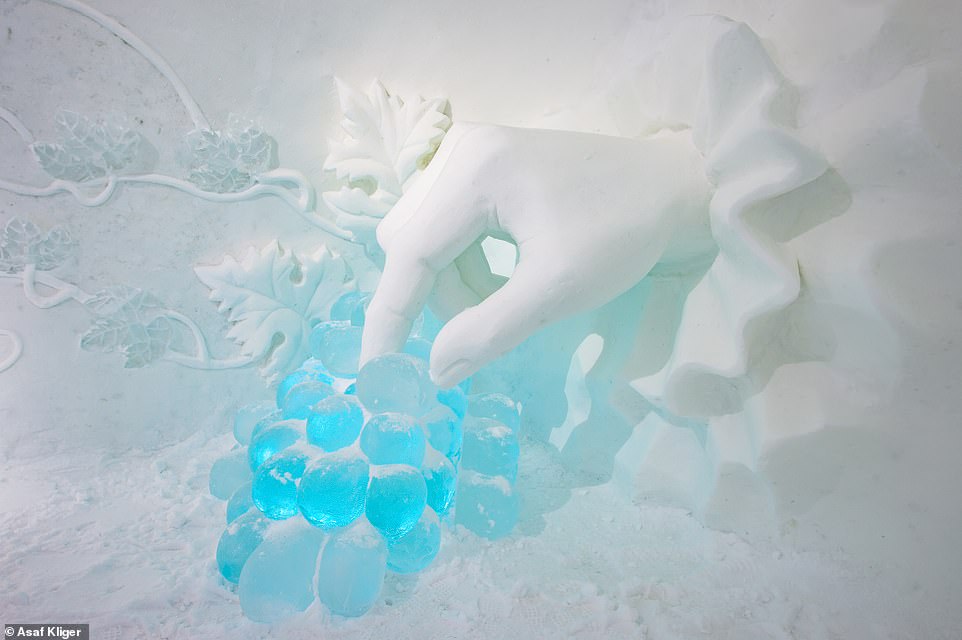 A total of 24 Swedish-based artists created the concepts for this year’s unique suites. This sculpture can be found in the suite called Vila Vid Denna Källa (Rest At This Source) by Tjasa Gusfors and Ulrika Tallving 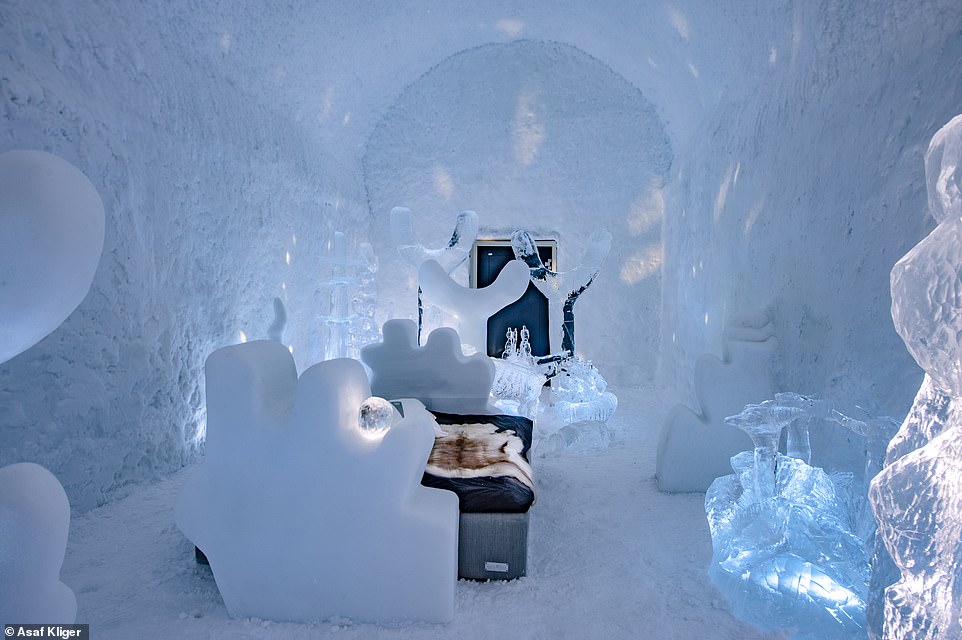 This stunning deluxe suite can be found inside Icehotel 365. It has been designed by Julia Gamborg Nielsen and Lotta Lampa and is called Kodex Maximus 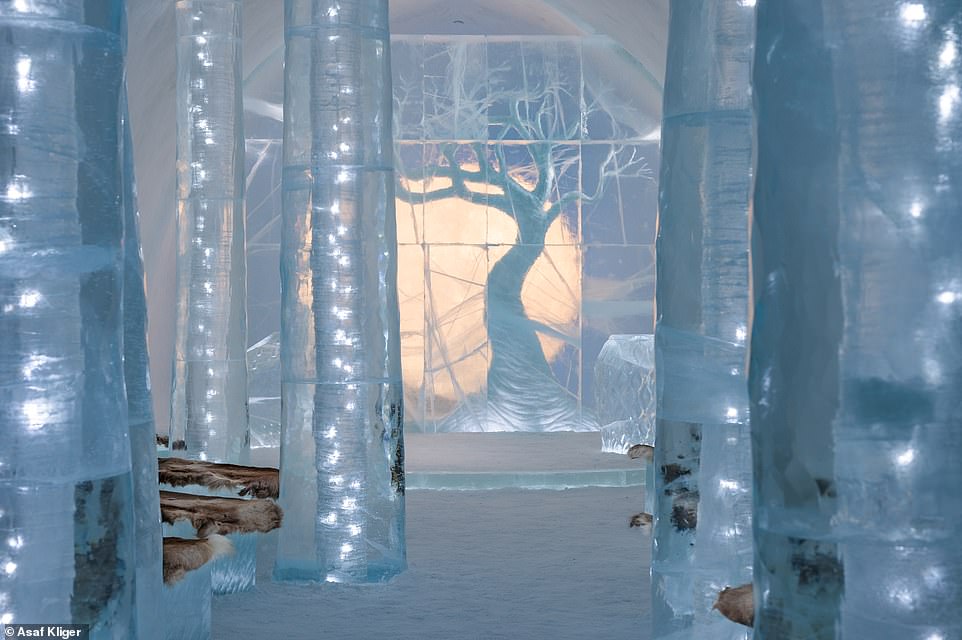 Inside the frozen forest-themed ceremony hall, which is designed for ‘intimate weddings and other celebrations’. It was created by Anna Ohlund and John Pettersson

Among the 12 new suites is one called Toybox, which is filled with building blocks and a rocket, all made from ice.

Another called Sauna looks exactly like a sauna but as Icehotel says –  ‘it’s probably the coldest sauna in the world’.

Other amazing suites, which were all created by Swedish artists, include one with a giant dinosaur sculpture and another called Oh Rapunzel, which features a Maltese dog with ‘long luscious locks flowing down the walls’.

Every room is equipped with a QR code that can be scanned so guests can hear an audio guide that tells the story about each art project. 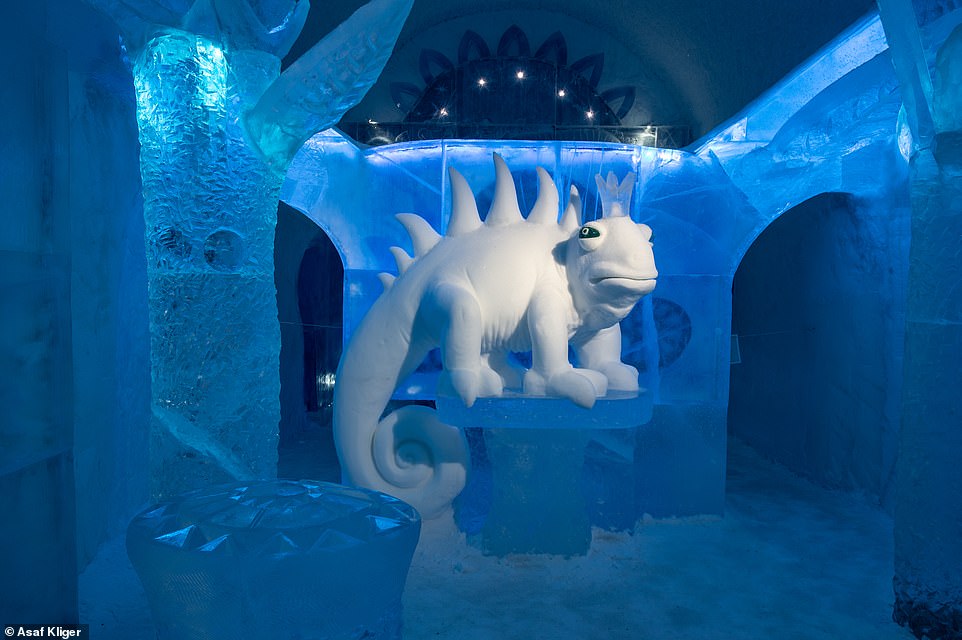 This huge dinosaur sculpture is the handiwork of designers Kestutis and Vytautas Musteikis. It is in the deluxe suite called Dreaming in a Dream 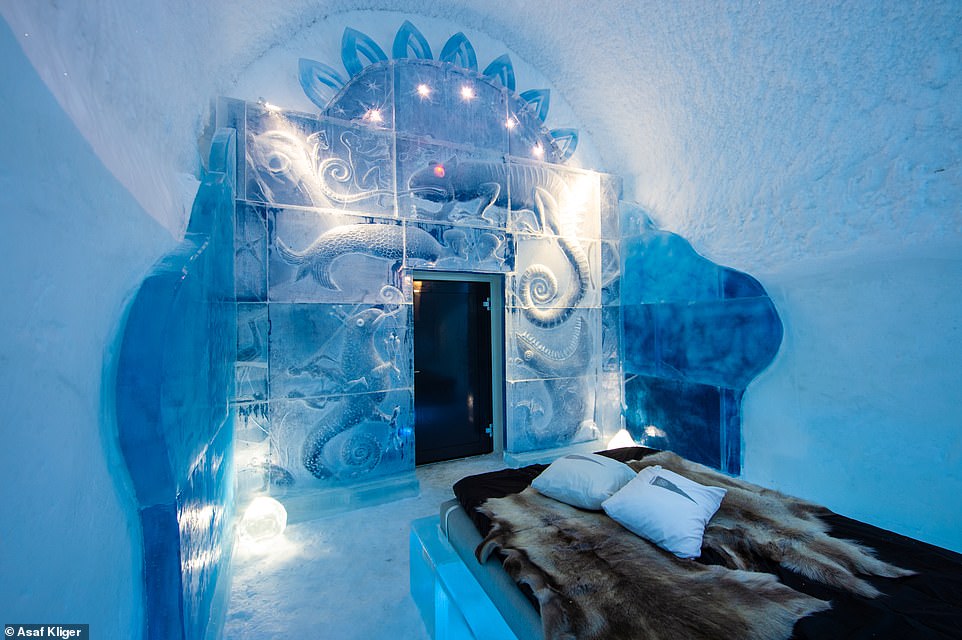 Another shot of the Dreaming in a Dream suite. Creative director of Icehotel, Luca Roncoroni, said: ‘The pandemic forced us to think differently, but the result is a stunning homage to Sweden’ 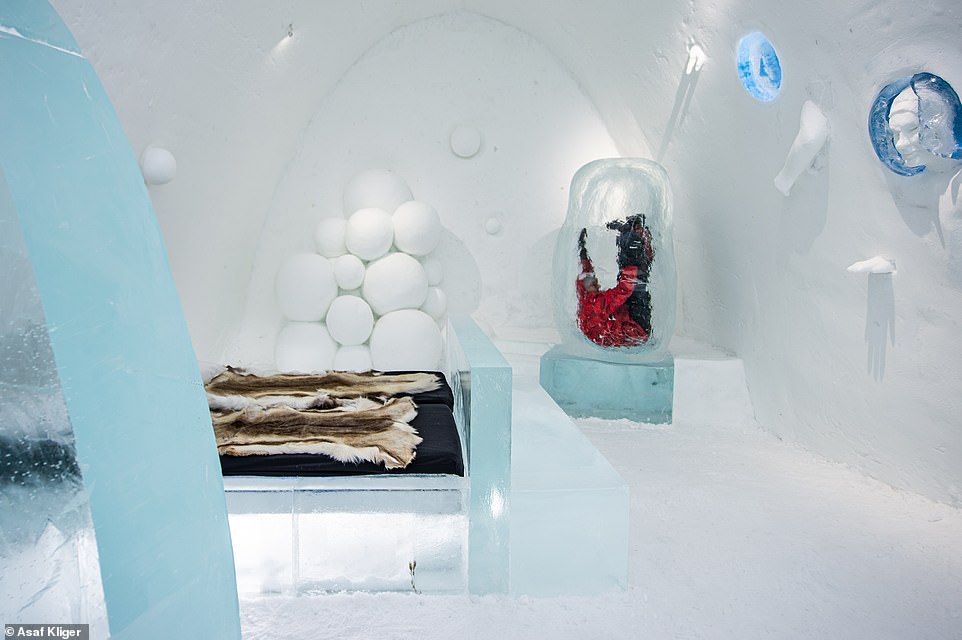 Lena Kristrom and Nina Hedman are the designers behind this unusual suite, called A Break. Each year since 1989, the Icehotel has been built and rebuilt using just snow and ice in the village of Jukkasjarvi 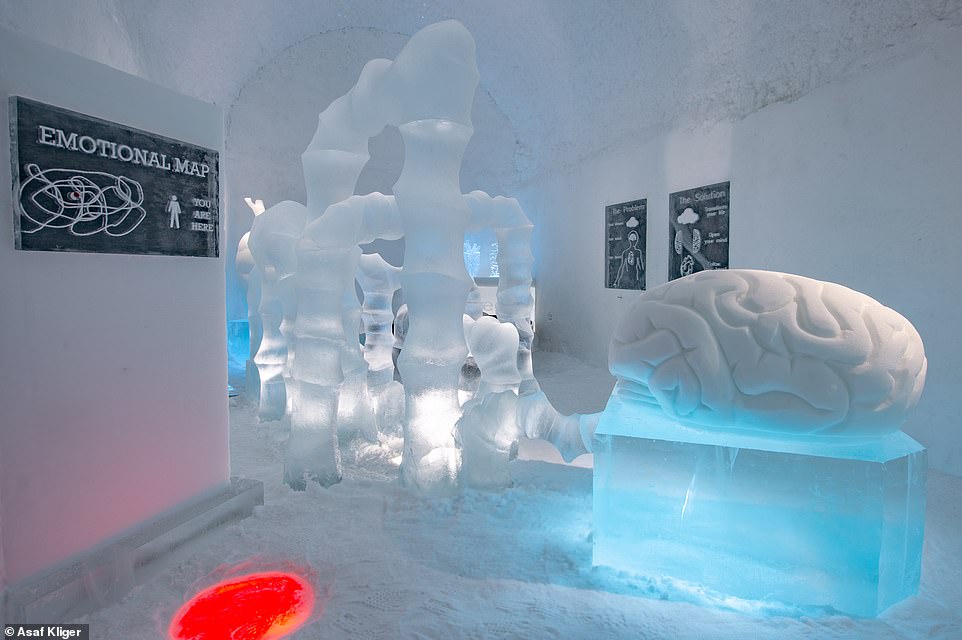 These incredible ice sculptures are by artists Elisabeth Kristensen and Dave Ruane. They are in a room called You Are Here 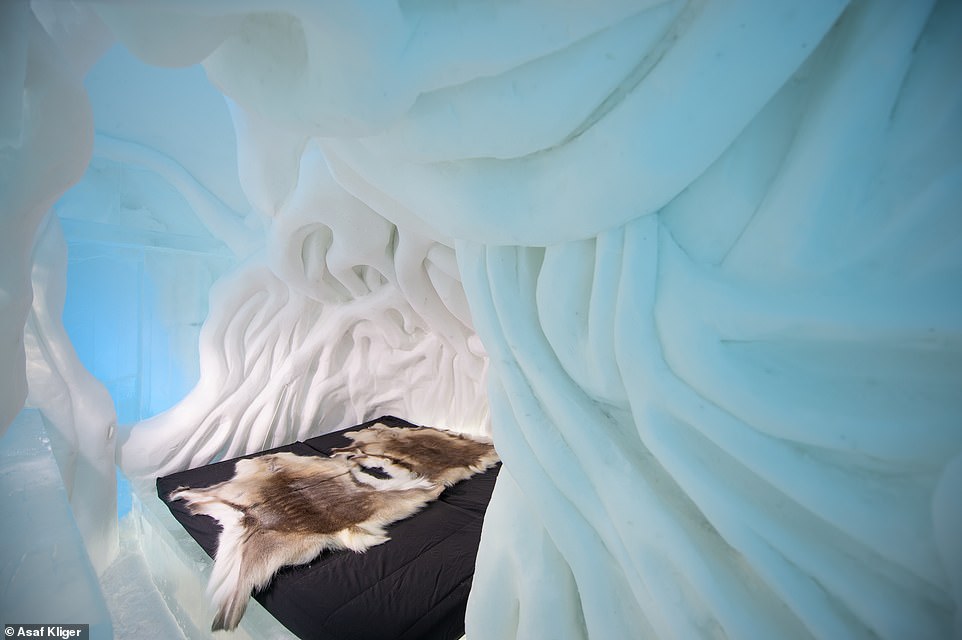 Paradice Lost is the name of this elaborate suite, which has been designed by Kalle Ekeroth and Christian Strömqvist 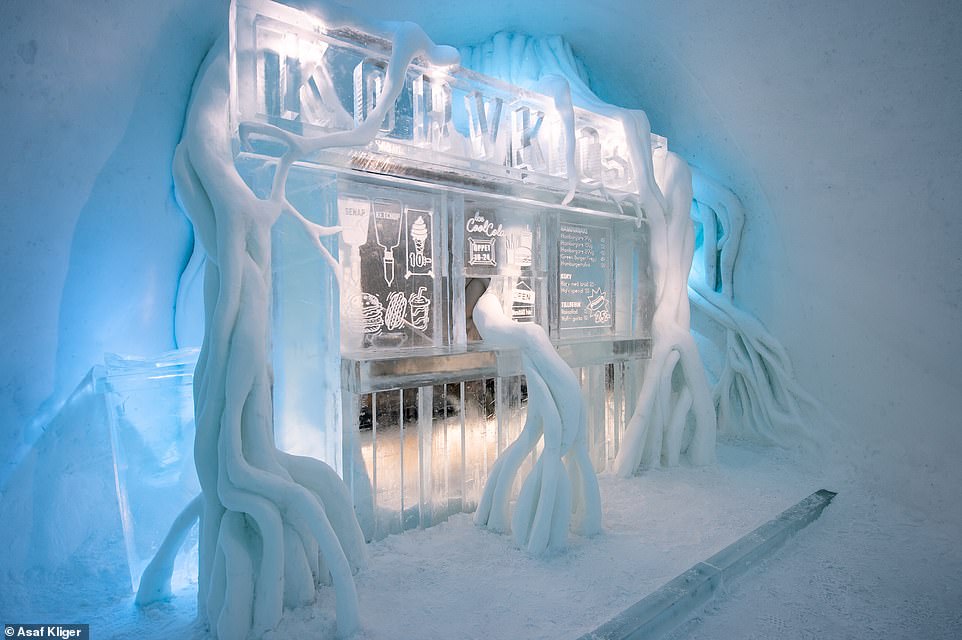 A 360-degree augmented reality tour of the hotel is available. Pictured is the Paradice Lost suite

Creative director of Icehotel, Luca Roncoroni, said: ‘The pandemic forced us to think differently, but the result is a stunning homage to Sweden.

‘The 31st edition of Icehotel will be a memorable one. The 24 Swedish-based artists created concepts that will mesmerise our guests, giving them a much-needed escape from the reality of this year.’

Unfortunately for Britons, the Foreign, Commonwealth and Development Office has warned against all non-essential travel to Sweden. 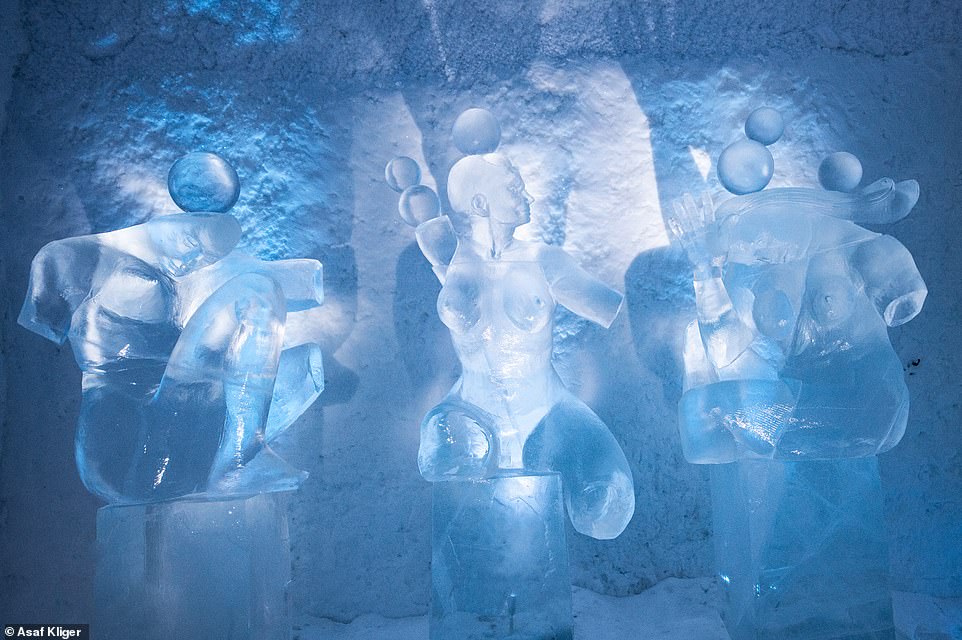 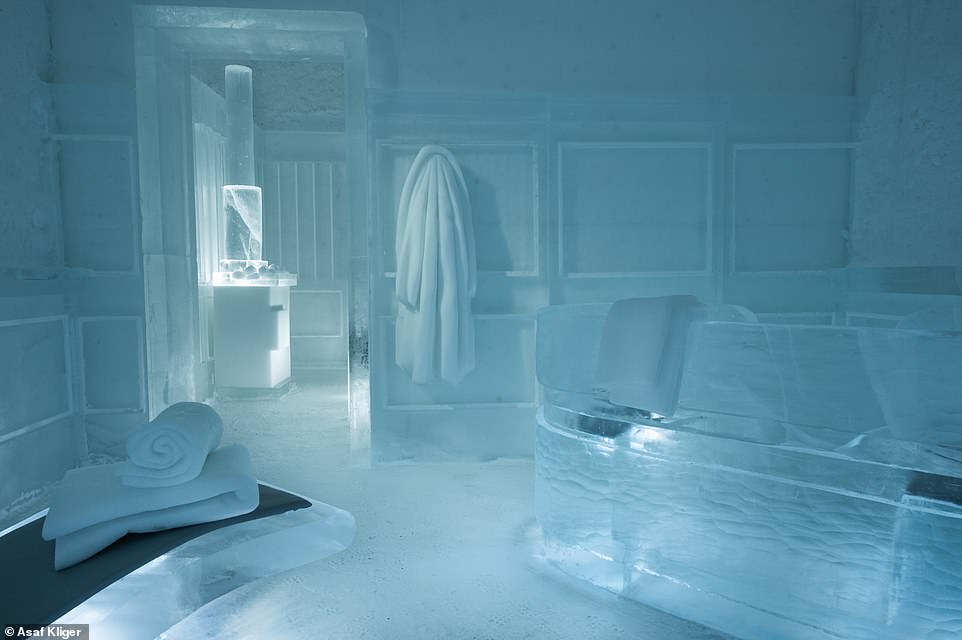 Welcome to ‘probably the coldest sauna in the world’. It was created by Luca Roncoroni 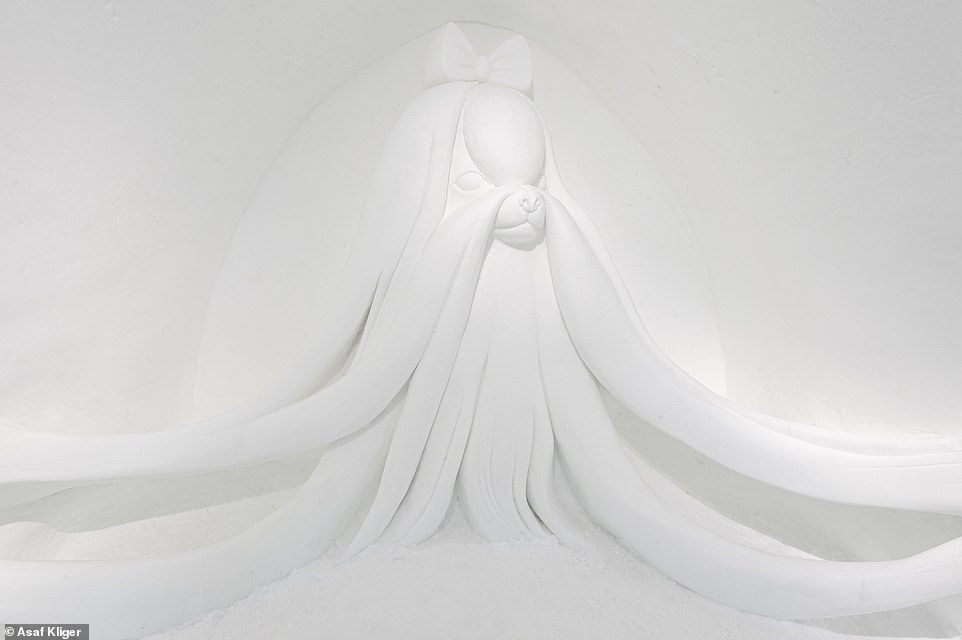 This suite, called Oh Rapunzel, features a sculpture of a Maltese dog with ‘long luscious locks flowing down the walls’. It was designed by Emilie Steele and Sara Steele 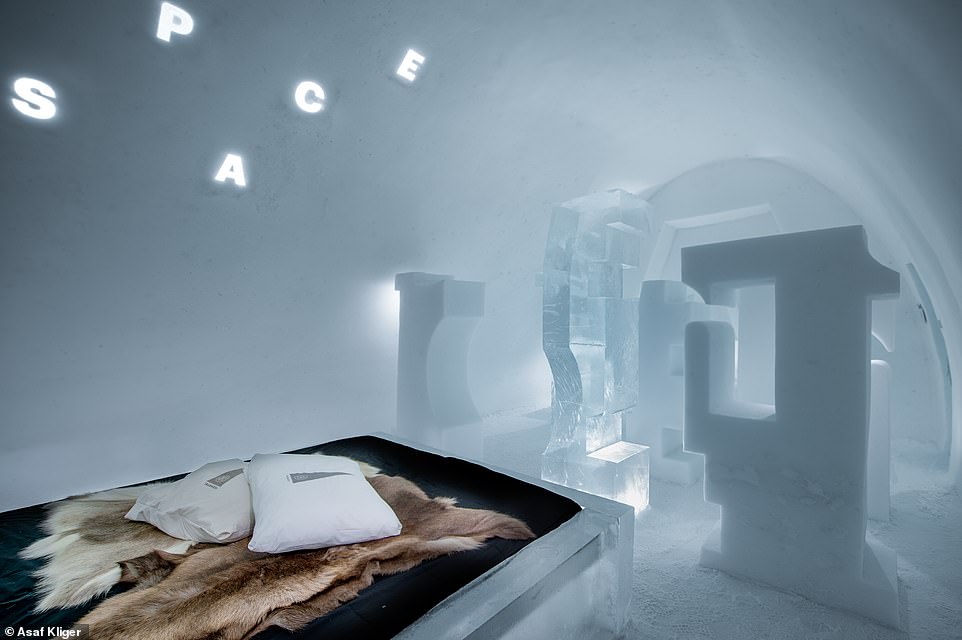 A Journey Into Letterspace is the name of this new suite. It was designed by John Bark and Charli Kasselbäck

Luckily, there’s an augmented reality Icehotel experience available on Instagram that lets users take a 360-degree tour around some of the new suites.

Malin Franck, CEO at Icehotel, said: ‘We know that many people are longing to travel, and we wanted to make the Icehotel experience accessible for those who may not be able to visit us right now.

‘So, we came up with the idea to create a virtual trip with the help of AR technology.’

In addition to the 12 suites already completed, a further six suites are being created in Icehotel 31 and will be ready to be presented on December 21.