A luxury Swiss ski resort near the famed Matterhorn peak is again cut off to road and rail traffic after new snowfall renewed the danger of avalanches.

Local authorities reported that land access to the village of Zermatt would be closed down throughout Monday, but that helicopters were still taking people in and out.

The Alpine resort said on its website that tourists and others on their way to Zermatt should seek lodging in bigger cities like Zurich, Basel and Bern until the situation stabilizes.

Get me out of here: People await a helicopter for a flight by airlift in Zermatt, Switzerland

Zermatt was cut off for two days earlier this month, temporarily stranding some 13,000 tourists.

Heavy snowfall had trapped guests at Zermatt, in the Alps, with all roads blocked and the only way of leaving or entering was by helicopter.

Helicopter teams were also deploying to trigger controlled avalanches to release snow buildup after more than 39 inches of snow fell in some parts of the region in 24 hours. 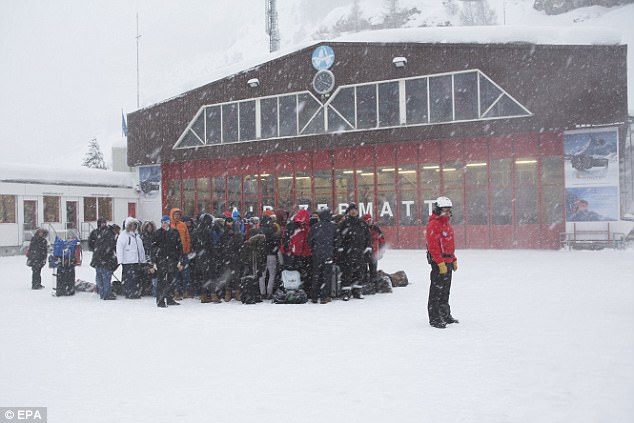 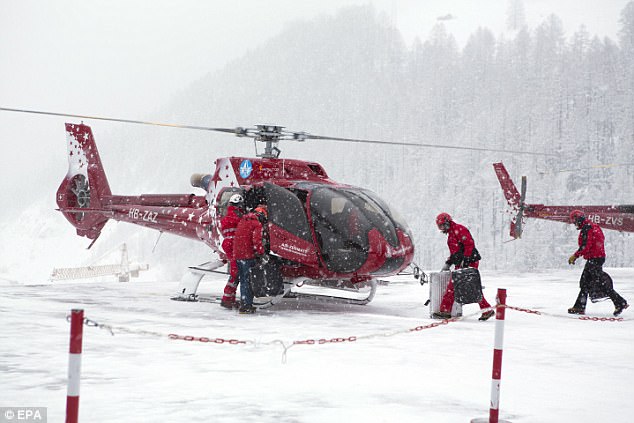 Not again: This is the second time in just a few weeks that snow has forced Zermatt into lockdown, as roads and rail were cut off for two days earlier this month

Frank Techel, an avalanche forecaster at Swiss avalanche research institute SLF, said that roughly 10-13 feet of snow had been dumped on the Zermatt area so far this year, which he called an ‘extraordinary’ amount for the region in such a short span.

Zermatt is home to about 5,500 inhabitants and has the capacity to accommodate 13,400 tourists spread across hotels and rental apartments.