Switch to Britcoin risks higher rates on loans: Bank of England fears a UK cryptocurrency would leave lenders with less cash in their coffers

The Bank of England has warned that loans could become more expensive if it decides to launch its own digital currency.

The Old Lady, led by Governor Andrew Bailey, is exploring whether it should create its own central bank digital currency, already unofficially dubbed ‘Britcoin’, in the UK.

It would offer a number of benefits to consumers including cheaper and faster payments, though the trade-off might be higher interest rates on loans.

Interest rates fear: The Bank of England is exploring whether it should create its own central bank digital currency, already unofficially dubbed ‘Britcoin’, in the UK

Unlike bitcoin and other cryptocurrencies, Britcoin would be linked to the value of the pound and backed by central bank reserves, so it would not swing wildly in value.

Bank of England officials, including the executive director for financial markets infrastructure Christina Segal-Knowles (pictured) and the director of CBDC Tom Mutton, are working on plans for Britcoin with the Treasury.

But the risk is that it will be more costly to borrow from banks if Britcoin takes off. This is because banks use deposits from customers to fund some of the loans they make. But if significant numbers hold Britcoins instead of keeping cash at the bank, lenders would have to tap other, more expensive, sources of finance to support their lending.

‘On the one hand, the introduction of new forms of digital money may improve the range of transaction services available to people. 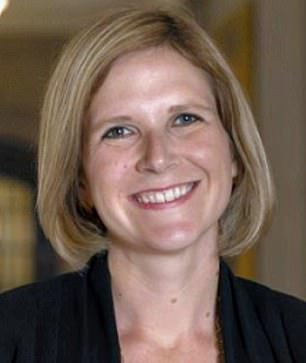 Bank of England officials, including Christina Segal-Knowles (pictured) are working on plans for Britcoin with the Treasury

‘On the other hand, it might reduce the efficiency of credit provision in the economy,’ it said.

‘Commercial banks have never faced a large-scale, system-wide displacement of the deposits they create,’ the Bank added.

Planning is now understood to be a top priority. If the currency is adopted, it would create upheaval for high street banks.

Because Britcoins would be issued directly by Threadneedle Street, users would not even need a normal bank account to deposit money.

Sir Jon Cunliffe, one of Bailey’s deputies, said Britcoins could be ‘programmed’ for certain uses, such as children’s pocket money so it can’t be spent on sweets.

‘There is a whole range of things [programmable] money could do…which we cannot do with the current technology,’ he told Sky News.

The Bank is concerned that, if introduced too quickly and without sufficient care, Britcoin could even interfere with its ability to regulate the economy through monetary policy, such as by raising or lowering interest rates.

Bailey said: ‘The emerging propositions have generated a host of issues that central banks, governments, and society, need to carefully consider and address.

‘It is essential we ask the difficult and pertinent questions when it comes to the future of these new forms of digital money.’

Etay Katz, a financial regulatory partner at law firm Ashurst, said the discussion paper was ‘a momentous junction in the development of digital money in the UK’.

He added: ‘The time is right for the regulators to embrace technology to enable the digital transformation that financial markets are going through.’