Switzerland may hold referendum on banning the burka

There could be a nationwide vote on banning the burka in Switzerland after a petition reached the 100,000 signatures needed to trigger a ballot.

An MP in the Swiss People’s Party, Walter Wobmann, said the campaign for the referendum achieved the required number of names two days before the deadline.

Begun in March 2016, the initiative had only 82,000 signatures a little over a week ago – meaning last-ditch efforts paid off in the final few days.

Islamic Central Council of Switzerland member Nora Illi (left) opposed the vote to ban the burka in Ticino back in 2013, but her side suffered an overwhelming loss

According to Luzerner Zeitung, a 76-year-old man in the canton of Lucerne managed to get 9,700 signatures entirely by himself.

The campaign was launched by the Egerkingen committee, of which Mr Wobmann is a leading member. 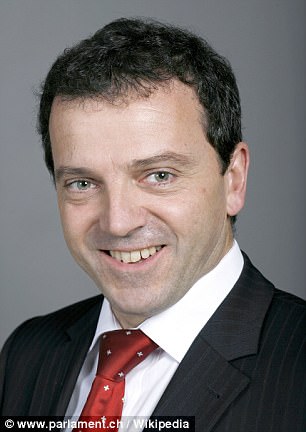 An MP in the Swiss People’s Party, Walter Wobmann (pictured), said the campaign for the referendum on whether to ban the burka has achieved the required number

He told the Tribune de Geneve: ‘It was tight. We are a small committee… we were lacking people to help us gather the signatures.’

Swiss officials must now look over the signatures to ensure they are all genuine and, if everything is found to be in order, the country will be given a chance to vote.

The issue has been argued over in Swiss society for many years, with the senate rejecting a draft bill on the topic in March after the lower house gave it approval.

It was also rejected by the people of Glarus canton during an open-air assembly this May.

But the canton of Ticino, in the south of the country, overwhelmingly backed a regional ban of the burka and other full-face coverings in public in 2013.

There have been only around half a dozen fines – which can be as high as 10,000 francs – in the canton, including one campaigner who deliberately broke the law. 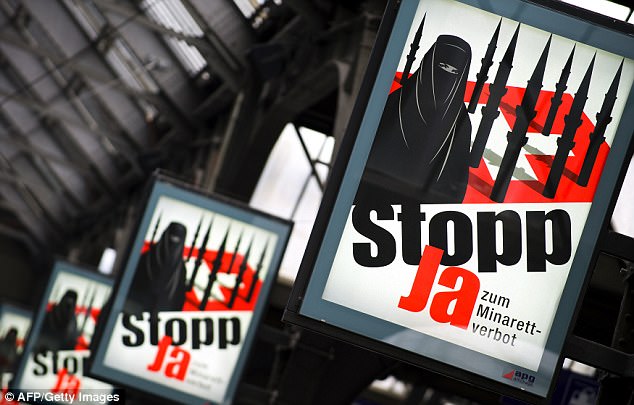 The Swiss People’s Party campaigned against minarets in 2009. Pictured: One of their posters in the referendum, which resulted in a ban on the construction of minarets

In 2016, however, a poll found that over two-thirds of the Swiss population backed a burka ban.

But Mr Wobmann told the Tribune de Geneve that regardless of the number of prosecutions today, it’s ‘better to act too soon rather than too late’.

He added: ‘We must send a strong signal against this symbol of oppression and radicalism.’