This is the stunning moment a bald eagle swoops from the Alaskan sky and soars away with an unlucky fish clamped in its talons.

Photographer Alan Murphy, 59, from London, was in Alaska, U.S, when he snapped the images which show the bald eagle’s six-foot wing-span and illustrate its precision when diving down to catch its dinner.

Travelling at up to 100mph towards the water, the 14lb bird’s talons wrap tightly around the fish.

The eagle has landed: Bird of prey snatches a large fish from the icy Alaskan waters with its enormous talons 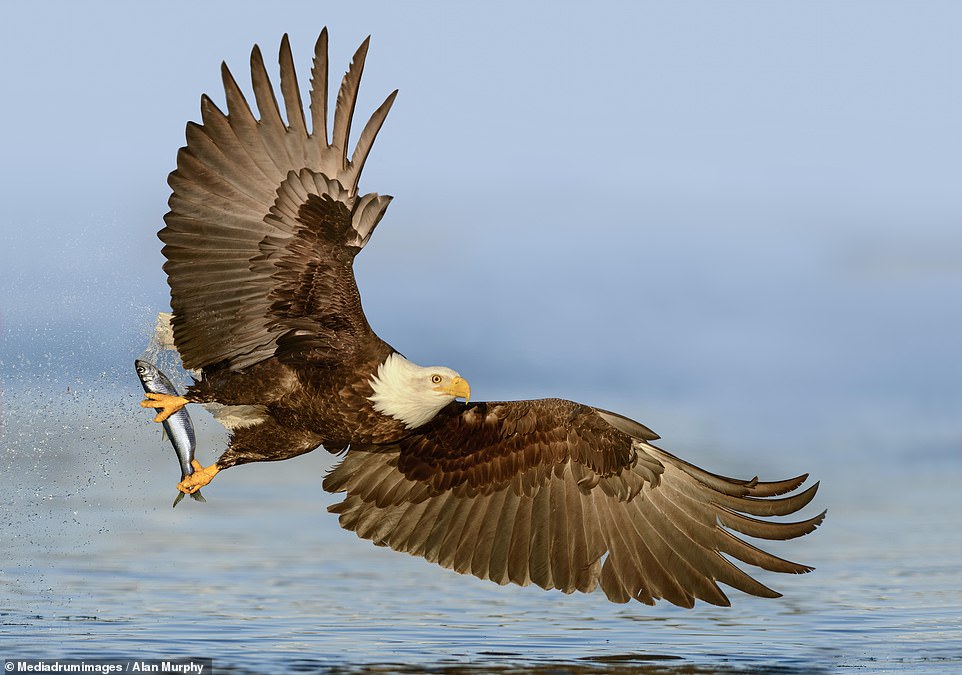 Dinner time: The bald eagle, an emblem of the United States of America, swoops away with the fish it had captured 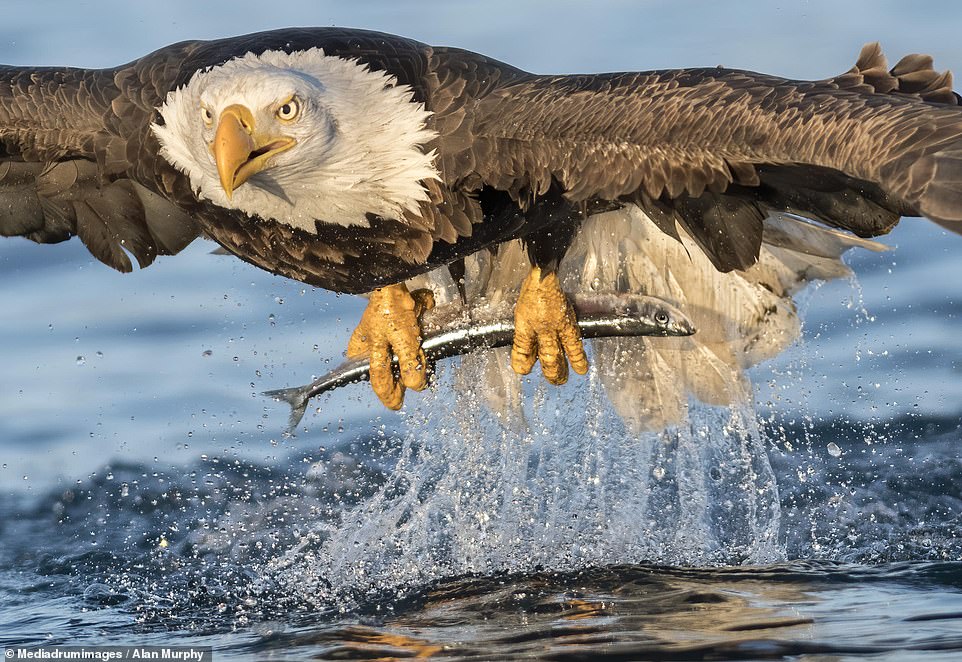 Catch of the day 2: In another of Alan’s photos, a second eagle takes its dinner from the seas in stunning close-up 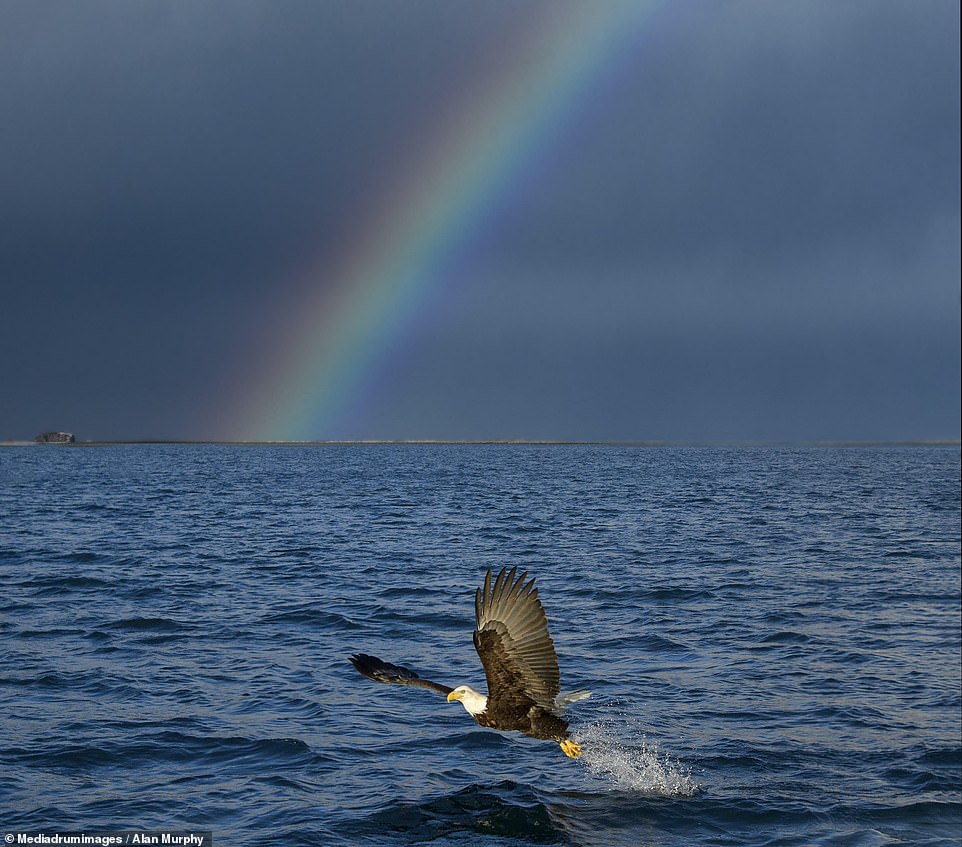 The bald-eagle dives down into the water to catch its dinner and is snapped by photographer Alan Murphy, 59, from London, while teaching a workshop in Alaska, U.S 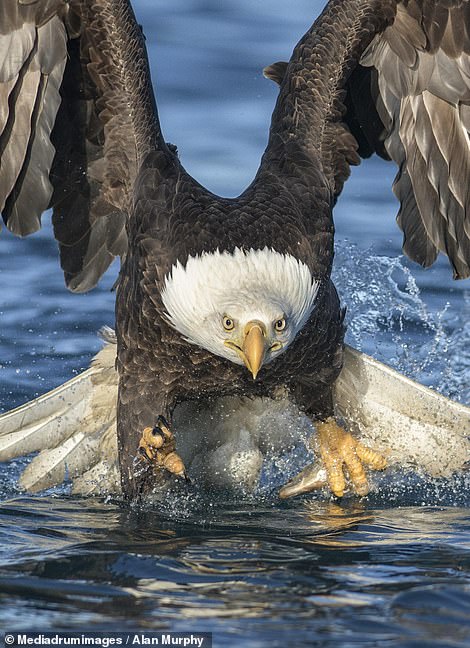 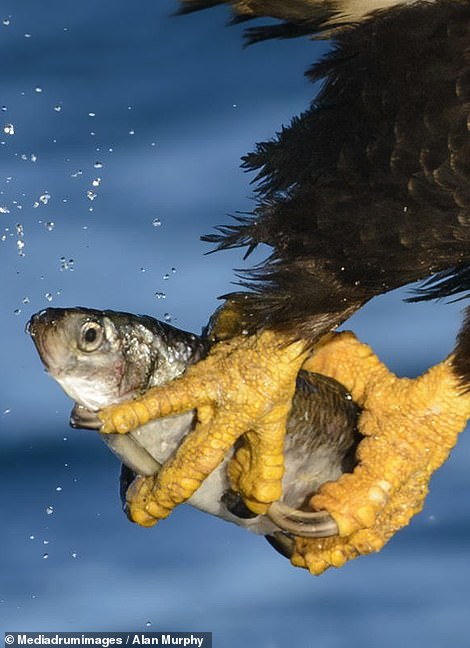 Eyes and the prize: The eagle snatches its prey – seen close-up on the right

For the past ten years, Mr Murphy has spent eight days a year leading workshops in the Alaskan mountains educating others on how best to capture images of America’s national symbol.

‘The eagles will take any species of fish they can find as long as they can lift it out of the water,’ Alan said.

‘Sometimes, they will lock their talons onto a fish that’s too big and they’ll need to swim to the shore to drag the fish up.

‘They can spot fish from a very high elevation yet they grab the fish so delicately with their talons extended out in front of them.

‘The bald eagles in Alaska are quite tame – they’re used to boats and fisherman. They will go about their business right next to you which allowed us to get very close.

‘When the image with the full-banking wing spread was captured I was just metres away with my camera at water level.’

The bald eagle travels at around 30 miles-per-hour in regular flight and can travel over 30 miles in a day, using its sharp eyesight to spot its next catch. 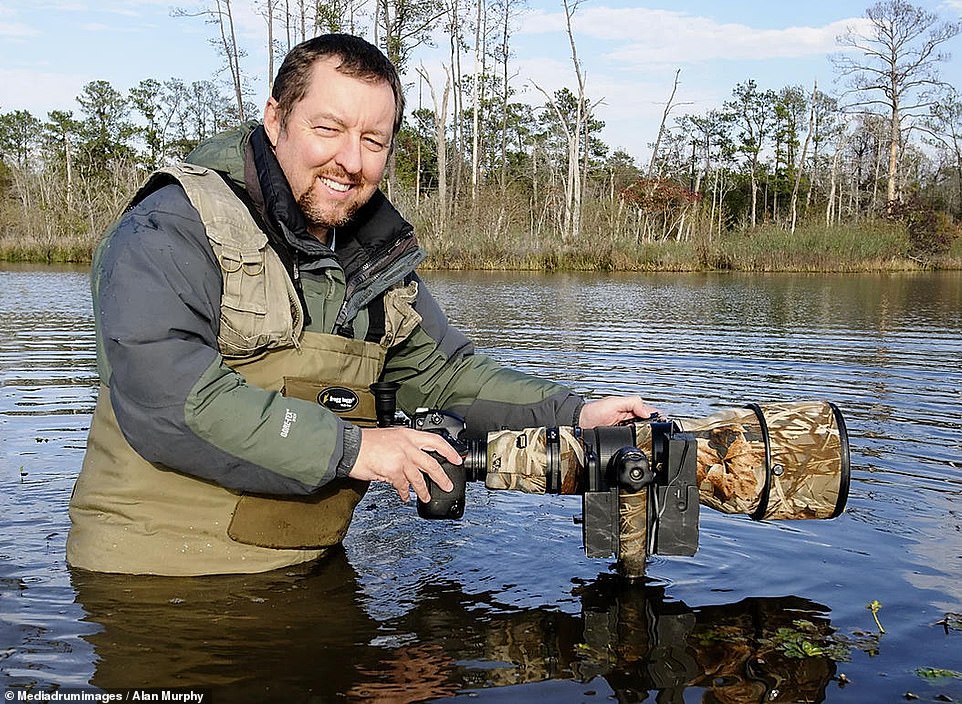 It forms a species pair with the white-tailed eagle – the largest bird of prey in the UK, which was recently reintroduced after becoming extinct in the country 240 years ago.

Species pairs are anatomically and chemically similar, if not identical.

Despite being America’s national symbol, the bald eagle was also facing extinction in the mid-twentieth-century but as Mr Murphy accounts, the numbers have dramatically increased since then.

‘They can be found in every state of the United States. It’s a great privilege to be able to photograph them.’