Sydney Airport has been described as a ‘disaster zone’ as thousands of travellers are left stranded across Australia on the first day of school holidays.

Sydney Aircraft control systems went down just after 5am on Monday, preventing all flights from leaving the domestic and international airports.

The technical glitch was resolved shortly after 9am, but airlines were forced to deal with a major backlog of passengers well into the afternoon.

Total chaos: Thousands of passengers have been left stranded at Sydney Airport after a huge power outage

‘Sydney Airport is a disaster zone. And the treatment of passengers is unacceptable. No one has a clue what’s happening. People everywhere,’ Neil Breen said on Twitter

Passengers took to Twitter to vent their frustrations on Monday afternoon, claiming they were left in the dark with little or no information.

Sport commentator and TV personality Neil Breen was one of thousands of disgruntled passengers caught up in the delays on Monday.

‘Sydney Airport is a disaster zone,’ he said.

Mr Breen said the airport was not taking proper care of passengers amid the chaos.

‘The treatment of passengers is unacceptable. No one has a clue what’s happening. People everywhere,’ he said.

He was not alone in his frustrations, as hundreds took to online platforms to vent, and warn others of the delays. 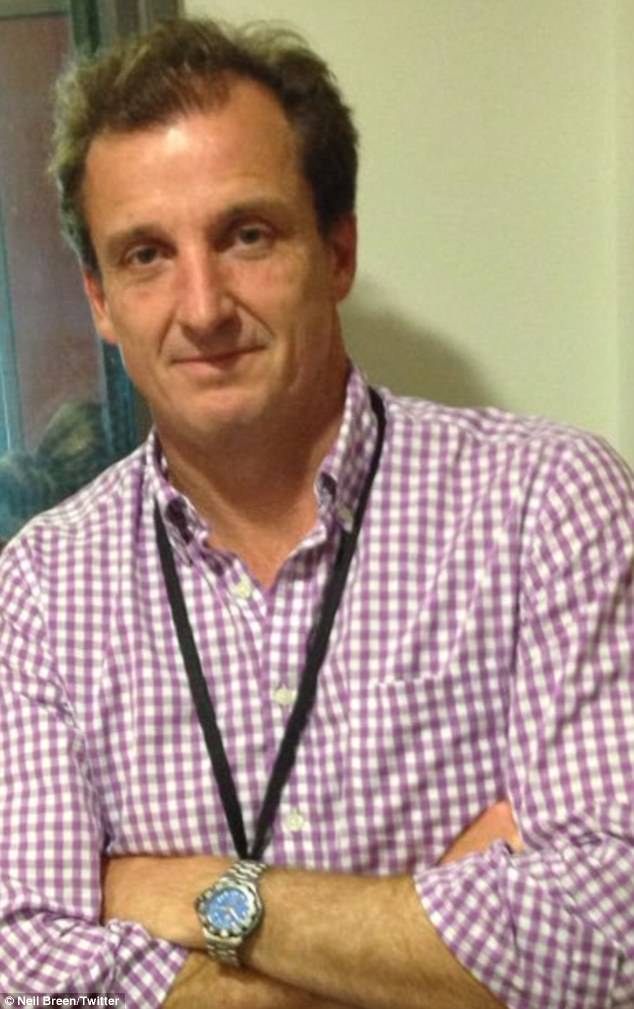 ‘The treatment of passengers is unacceptable. No one has a clue what’s happening. People everywhere,’ Mr Breen said 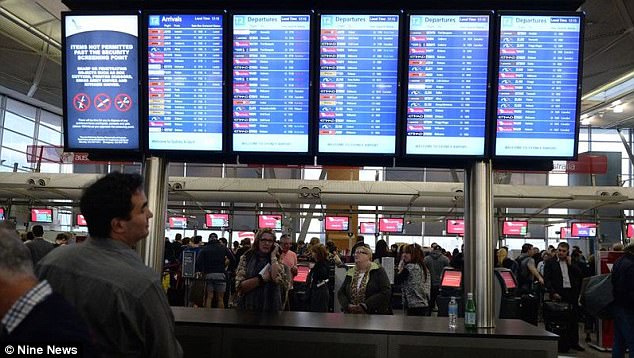 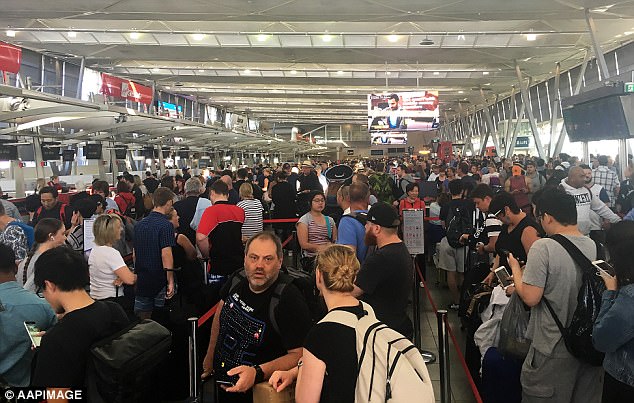 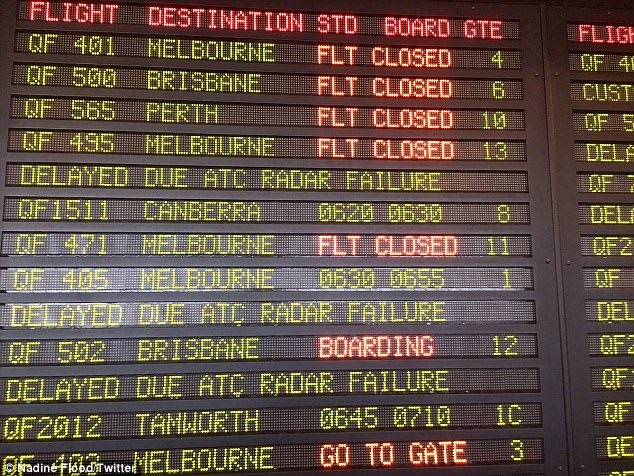 By mid-morning, queues stretched out the front doors of all terminals at the major airport as airline staff battled to contend with cancelled flights.

With systems down, air traffic control was forced to revert to a manual process for departing flights – allowing just 15 planes in and out of the airport every hour.

All Sydney-bound flights were grounded, as the New South Wales capital city struggled to keep up.

The chaos came as thousands of families prepared to head away on vacation for the school holidays, which began for many on Monday.

The technical glitch was resolved by 9am with the domestic airport ‘progressively returning to normal operations,’ a spokeswoman for Sydney Airport said.

‘The issue has been addressed but the airport is not at normal capacity. We are working hard to clear the backlog of flights,’ she said.

Delays are also being felt on the roads, with traffic backing up for kilometres at Mascot and surrounding suburbs.

‘We were at a crawl for about 10 kilometres before the terminal,’ Nina Masters said.

‘It was quite funny because people were getting out and walking with their bags including air hostesses to get to work on time.’ 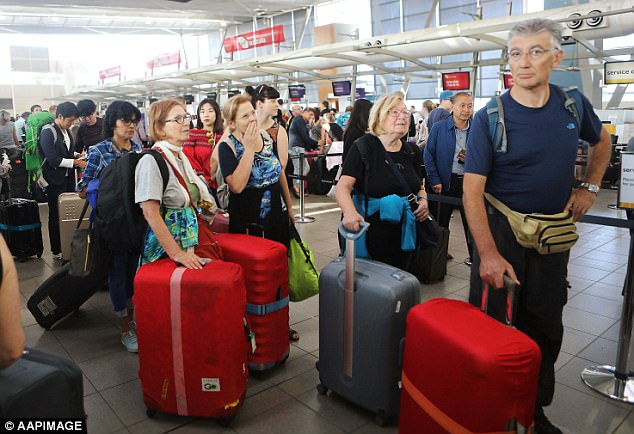 The technical glitch was resolved by 9am with the domestic airport ‘progressively returning to normal operations, a Sydney Airport spokeswoman said

The Sydney flights suspension will have major knock-on effects across the country.

‘If one airport sneezes the others will catch the cold because we’re all interconnected,’ a Brisbane Airport Corporation spokeswoman told AAP.

She said knock-on delays were already being felt in Brisbane from the Sydney event.

‘A lot of flights will be impacted because it is one of the busiest routes to and from Brisbane.’ 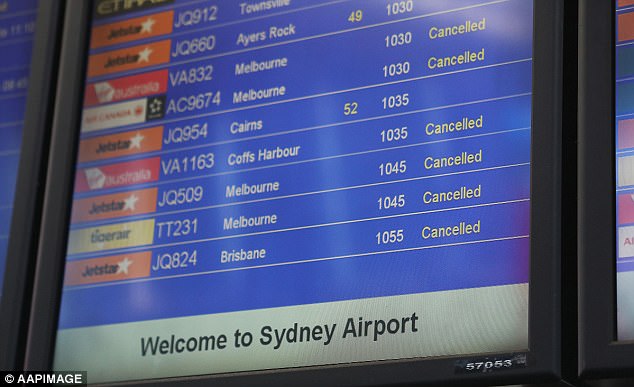 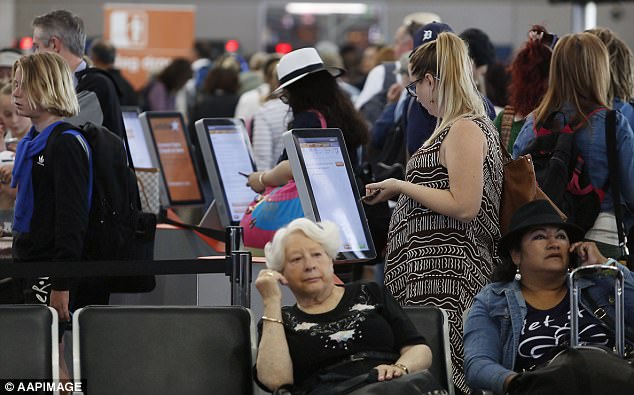 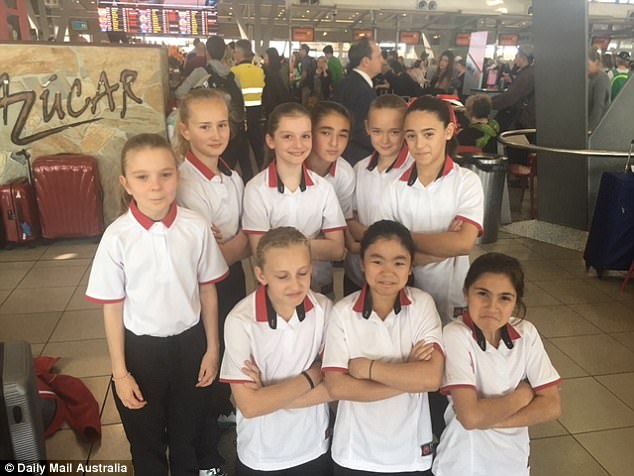 A group of young female gymnasts joined by their mothers were left stranded at Sydney Airport the day before their national championships in Bendigo.

The girls, aged 10 to 12, said they were terrified they might miss the competition they had trained all year for after their flight was cancelled.

‘We don’t know what we’re going to do… we start the comp at 10am tomorrow so there’s no room for disasters like this,’ team mother Maria al Hassan told Daily Mail Australia.

The team are now weighing up their options – which include driving in packed cars, catching a train to Newcastle and catching another flight or risking the wait for a replacement flight at Sydney.

Airservices Australia urged passengers to check with airlines for their flight status before arriving at Sydney Airport. 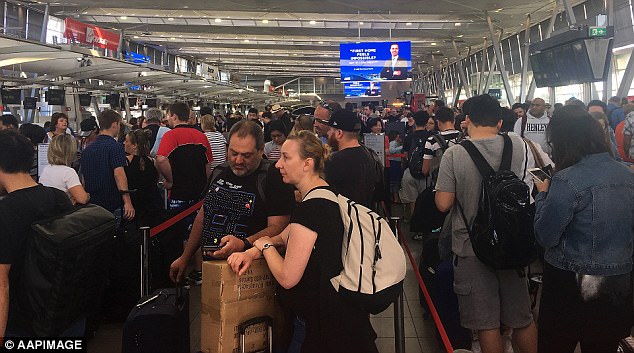 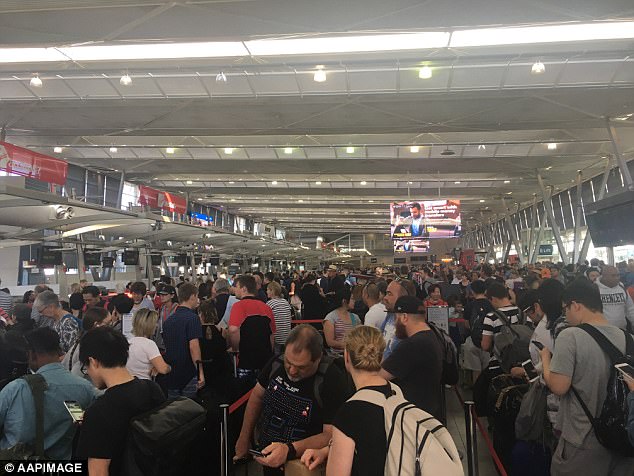 ‘If one airport sneezes the others will catch the cold because we’re all interconnected,’ a Brisbane Airport Corporation spokeswoman said 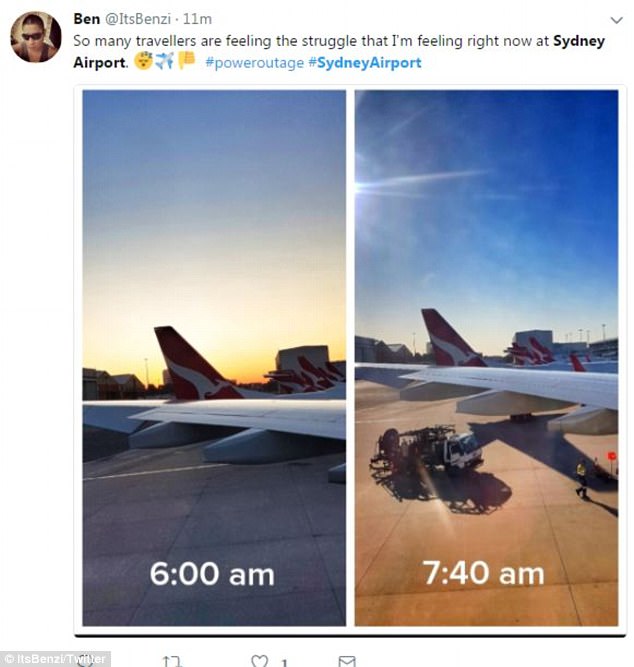 Brisbane passengers took to Twitter to report the delays.

‘Brisbane Airport, if you expect delays of over 15 minutes you should let people off the plane and back into the terminal,’ Ben Burnsy said. 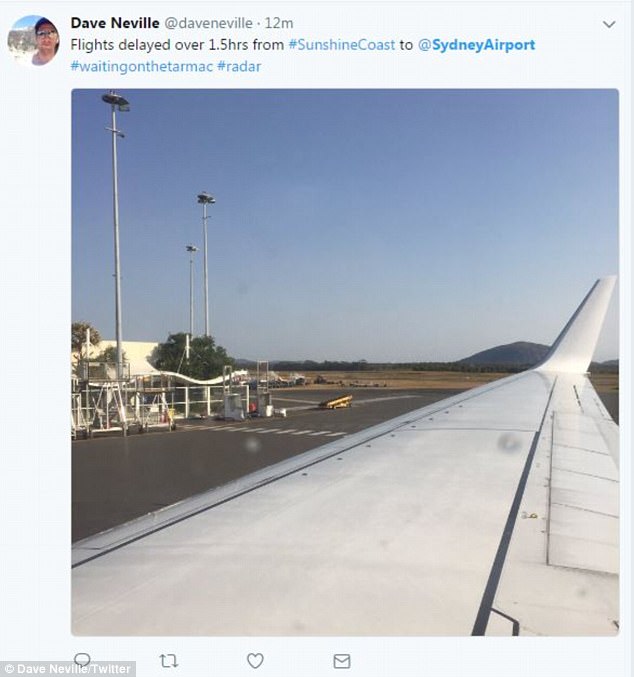 Flights delayed over 1.5 hours from Sunshine Coast to Sydney Airport – one passenger reported from his plane seat 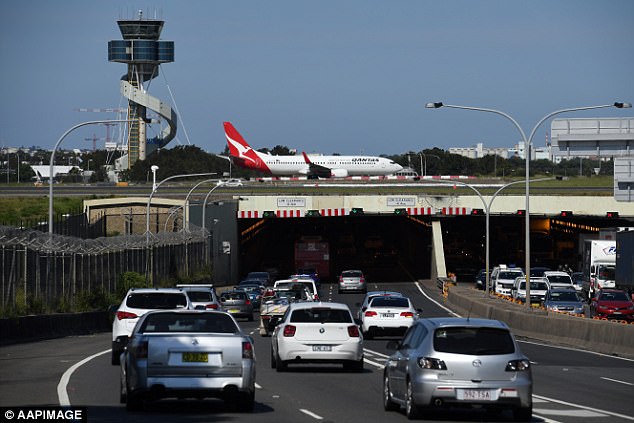