A mum and cleaning guru who found her car covered in mould has revealed how she managed to get a huge payout from her insurance company.

Back in July, Anita Birges, who heads Mise en Place Professional Organising, found her car infested with mould after leaving it unused during Sydney’s wettest months.

In a video posted to Instagram, she and her husband Ryan explained, thanks to fan advice, they called their insurer who said while mould is an ‘unclaimable event’ the car was deemed a write off as it posed a ‘health risk’ to the assessor.

Cleaning and organising pro Anita Birges, (pictured) has revealed how she got a huge payout from her insurance company after she found her car riddled with mould in July 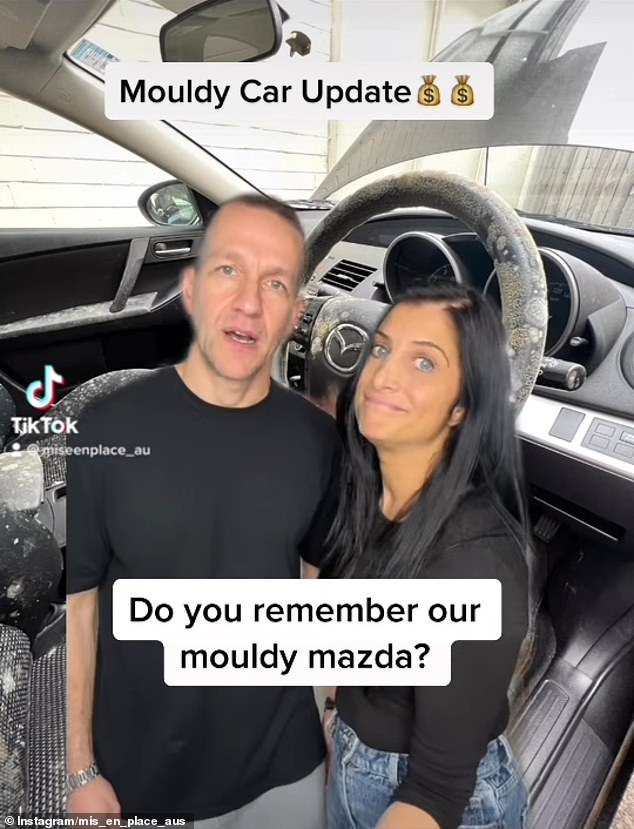 ‘I called the insurance company and mould is an unclaimable event but the assessor would not enter the vehicle because it’s a health hazard,’ Ryan said.

‘Which means it’s a write off. It was dangerous for him to get into the car and we got paid. So RIP Mazda 3, show me the money,’ Anita added.

In the caption, Anita wrote that the process took a while but it was worth it as they got what they wanted in the end.

‘The assessors said it was a health hazard and dangerous for anyone to enter the vehicle,’ the post read.

‘We would have never thought to go to our insurer if it wasn’t for your suggestions to do so.’

Previously, Anita was at a loss over how to clean Ryan’s 2013 Mazda 3 after it was found riddled with the dangerous fungus.

In a video Anita can be seen recording herself and her husband standing outside the car that shows the green mould infestation growing on the front seats, steering wheel and carpet. 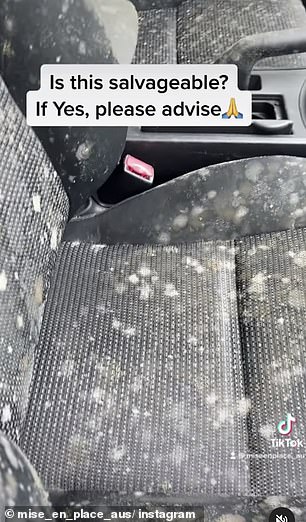 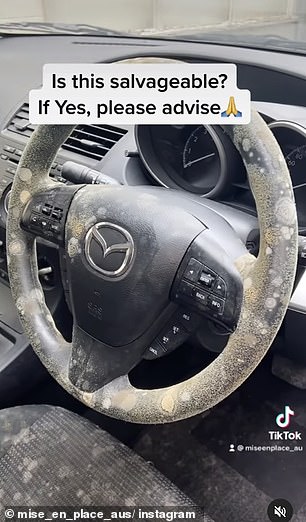 Previously, Anita was at a loss over how to clean Ryan’s 2013 Mazda 3 after it was found riddled with the dangerous fungus

‘This is what happens when you leave a car in hibernation during the wettest year Sydney has ever seen,’ Anita wrote online.

The car hadn’t been touched for months and was kept for Anita’s husband’s teenage daughter who is expected to start driving at the end of the year.

‘Little did we know that when we went to move it out of the driveway today that we would get this beautiful surprise,’ Anita continued.

‘To say I was completely shocked is an understatement. I have NEVER seen mould like this in my life!!’

Since the car was left untouched after months of rain, it became the perfect breeding ground for mould due to a lack of air flow. 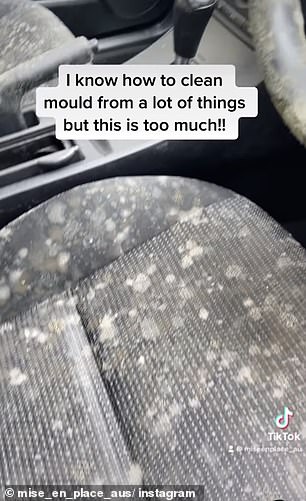 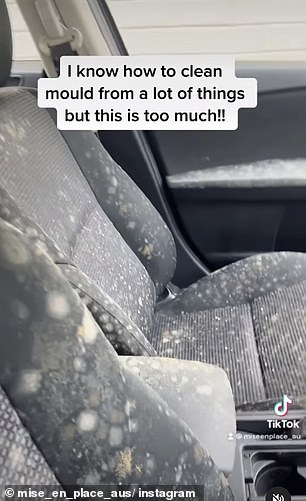 Anita is known for sharing how to remove mould from leather jackets, bags, blinds, kids toys and lunchboxes, but was stumped at how to tackle the car.

As mould can significantly impact your health, it’s important to leave the clean to professionals if needed, which is what Anita chose to do.

‘You know me, I’m willing to give anything a red hot go and I love finding a good DIY cleaning solution. But I am not afraid to put my hands up and say that this is way too much for me to handle and I need some expert advice,’ she said.

Seeking help online she asked other social media users for recommendations and if the car is salvageable.

How to remove mould from your home:

2. Apply to the area and leave on for 10 minutes

3. Wipe over with microfibre cloth

5. Spray the solution onto surfaces and area around the home – such as the shower, windowsills, roller blinds, etc

Supercheap Auto’s website warns mould can be a health hazard.

‘If you find mould growing in your vehicle then it is a sign that there is an excess of moisture build up – most often due to a leaky seal around a door or window,’ it says.

‘Not only is mould smelly and unsightly, but it can also be very dangerous. Mould spores can cause severe respiratory issues, especially in children, the elderly and people who suffer from asthma and other existing conditions.

‘For these people, mould can cause nasal stuffiness, throat irritation, coughing or wheezing, eye irritation, or, in some cases, skin irritation.’