‘It gets worse the more you look at it’: Driver is mocked by cops for the VERY unusual way he decided to transport a kitchen appliance

A Sydney driver has been mocked and fined by police for the ridiculous way he tried to transport a fridge through Sydney’s CBD.

Officers from the NSW Traffic and Highway Patrol stopped the driver on Oxford Street after spotting the kitchen appliance hanging out the back of his car.

The fridge had been placed horizontally across the boot of his car, on top of a thin blanket used in an effort to stop the appliance from scratching the paint. 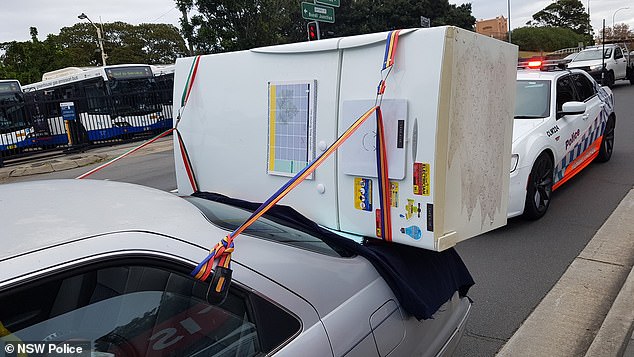 Officers from the NSW Traffic and Highway Patrol stopped the driver on Oxford Street near Sydney’s CBD, after spotting a large fridge perched precariously across the boot of his car

The creative driver had then used two straps to secure the kitchen appliance through the car’s open back windows.

‘There are several ways to transport a fridge safely, and then there is this guy,’ police said in a post on Facebook.

‘Upon inspection, police sighted a poorly designed and dangerous load restraint setup with the large fridge perched on the rear boot of the Camry sedan.

‘Police made sure the driver made alternative arrangements for the fridge to be transported another way before he could leave the scene.’

Police said the brazen driver received an infringement notice for the unsecure load. 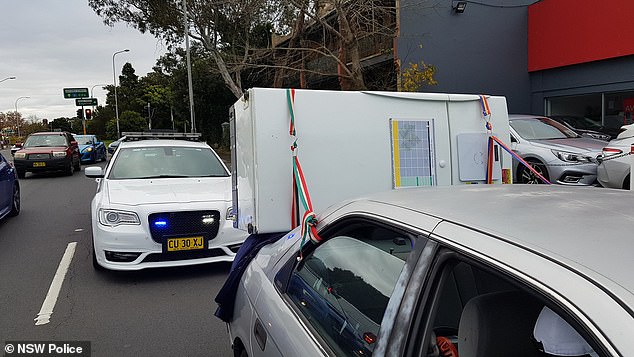 The fridge had been placed horizontally across the boot of his car, on top of a thin blanket, used in an effort to secure the appliance

Officers reminded residents that dangerous loads were a hazard to other road users and pedestrians and asked bulky items were covered or secured appropriately.

Unimpressed Facebook users took to the comments to slam the driver’s peculiar transporting method, with some suggesting he deserved stricter punishment.

‘It just gets worse the more that you look at it’, one user said.

‘If you listen carefully, you can hear the little straps screaming for mercy’ another person joked.

‘Stupidity, I hope they took his licence then and there’, a third user commented.

‘I bet the fine is more than a hire truck’, another user said. 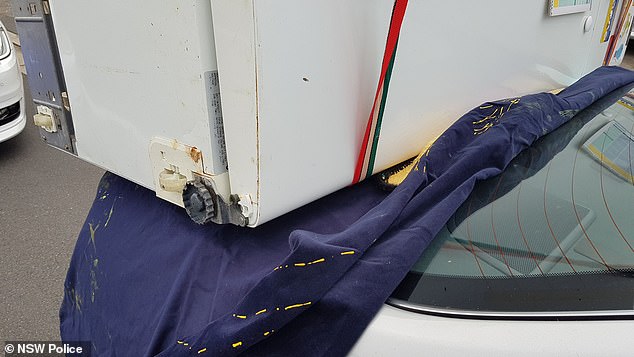 However other commenters said the driver should receive a little more credit for his creativity.

‘What a genius’, one man commented.

‘Give him a bit of credit for the thought’, another said.

‘The question is how far did he travel like this and how far from home was he. If he was nearly home, have to give him some merit’, one user said.

‘At least he protected his paint job’, another person joked.