A young serial paedophile is back behind bars after allegedly using his mother’s iPhone to view images of children in the middle of the night.

Dean Angus Bell, 25, was arrested at his parents’ suburban Sydney home on Monday for breaching the strict conditions of a Child Protection Order against him.

He appeared in Campbelltown Local Court on Tuesday where bail was refused.

Bell has a criminal history which psychologists rate among the top one per cent of international sex offenders.

NSW Supreme Court documents reveal Bell has a record of repeat offending, with some of his acts on children committed within just hours of his release from prison.

Despite this Bell has been allowed to live on the same street as a kindergarten since he last walked out of prison – but is now back behind bars after allegedly taking his mother’s phone without her knowledge and using it to view pictures of children.

Dean Angus Bell (pictured) is only 25 but has been rated by experts among the top one per cent of sex offenders internationally. He found himself back behind bars this week after allegedly using his mother’s iPhone to view pictures of children

Police allege that between 12.47am and 3.36am on February 28, Bell committed four breaches of the child protection order he is subjected to.

He is alleged to have accessed his mother’s iPhone and visited a photo-sharing website, court documents seen by Daily Mail Australia revealed.

The Russian website is popular among paedophiles who send images of naked children around the world.

Bell was arrested on Monday morning and charged with four offences relating to the alleged breach of his child protection order.

They include having a password protected phone in his possession, accessing the internet other than to seek employment, access the internet not from an authorised computer and use a mobile device to view images of children under the age of 18.

Bell did not apply for bail and was ordered to remain in custody during a brief court mention on Tuesday.

Bell has been in and out of jail since the age of 18 and an application was last year filed to have him officially listed as a high-risk sex offender.

As part of this application he was ordered to undergo an assessment by psychologists, including sitting the Static 99R test – a tool used to assess sex offenders in Australia, the United States, Canada, and much of Europe.

The test’s ten questions focus on the age, number and regularity of the offender’s victims.

Documents revealed that when Bell sat the test, the results were rated ‘concerning’.

‘Compared to other adult male sex offenders, Bell’s score is in the 99th percentile…’ Bell’s psychologist said in a report. 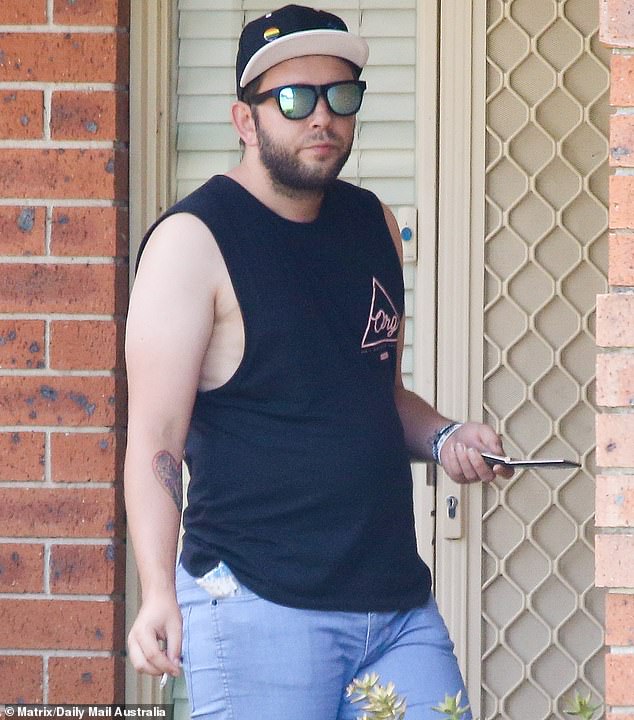 Bell (pictured) was granted parole last July but despite being subjected to some of the strictest conditions for an Australian paedophile is living among families in suburban Sydney. Police allege he broke those conditions by using his mother’s phone in the early house of February 28 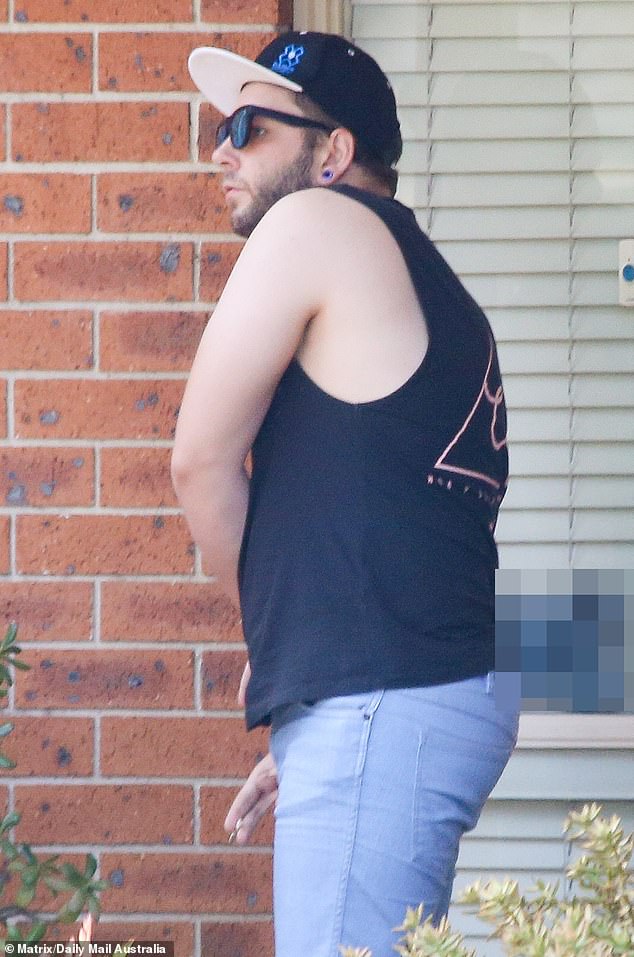 Bell’s offending began in 2013 when the then 20-year-old used social media in an attempt to groom a 13-year-old boy for sex, the documents show.

In September 2014 Bell offended again, contacting a 14-year-old girl and asking her to persuade her friend, another 13-year-old boy, to perform sex acts on him.

Bell offered to give the pair $100, cigarettes and drugs if the boy ‘masturbated him’.

Police also found him to be in possession of child abuse material and saw photos he had taken on his phone of random children at a shopping centre.

Bell was sent back to jail for a minimum of two years and released on June 19, 2017, court documents show.

He told the person he was ‘depressed’ at not being able to see the young boy, according to the court papers.

– 2014: Through a third party he tries to get back in contact with a young boy.

He offered $100, cigarettes and drugs to the pair if the boy ‘masturbates him’.

Police also found child abuse material and photos of children at a shopping centre on his iPhone.

He is jailed for two years.

– June 2017: Just four days after he was released from prison, police arrest Bell.

He is convicted of breaching an AVO and jailed for a minimum of 13 months.

– December 2018: Bell breaches his prohibition order and on top of already strict parole conditions is ordered to wear an electronic monitoring bracelet

Bell’s contact offered to reach out to the young boy on his behalf and sent his phone number to the child.

That same day, during a routine report to a police station, officers searched Bell and discovered an iPhone he had been given by his mother which he was not permitted to have.

On the phone they found the young boy’s contact details constituting a breach of an AVO and Bell’s parole conditions.

‘Without intervention by victims parents the child would’ve been subjected to sexual assault,’ the court heard.

Bell was sent back to jail, before again walking free at the earliest date 13 months later in July 2018.

The application to classify him as a high-risk offender was made and he was subjected to the assessments by expert psychologists.

The reports detailed the ‘concerning’ nature of Bell’s offending, specifically his efforts to contact victims so rapidly after being freed from prison.

‘It is concerning that, despite having spent 21 months in custody for interactions with persons under the age of 18, one of Bell’s first actions after release from custody was to “allegedly” attempt to contact his victim,’ the report read.

As part of his parole and child protection order conditions, Bell was also subjected to strict day-to-day living requirements.

Among these conditions is a blanket ban from social media and dating apps, while a ban on using public transport also applies at specific times.

He is also banned from using iPads and internet capable phones.

Only one computer is allowed in his parents house, which he can only use to look for work. 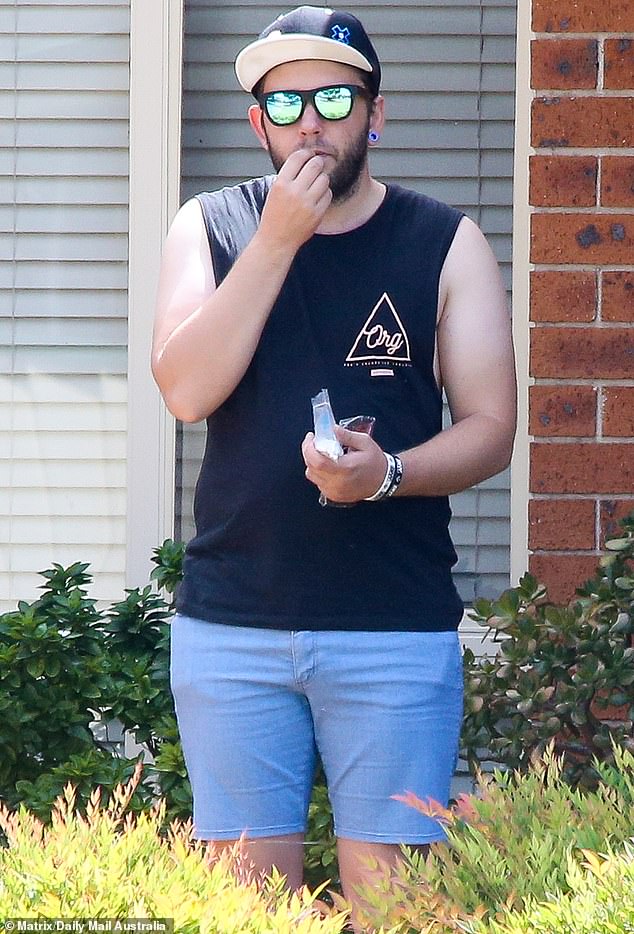 Bell has been in and out of jail since he was 18, on some occasions re-offending within hours of his release from prison 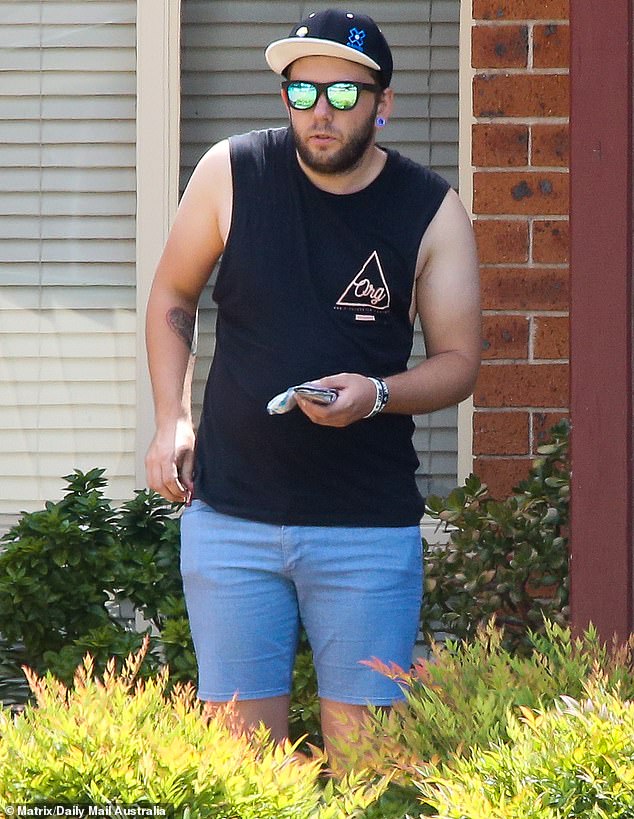 When Daily Mail Australia visited Bell he refused to answer questions, continuing to smoke a cigarette and browse through his outdated flip-phone

Bell is also banned from drinking alcohol without his supervising officer’s approval.

When Daily Mail Australia visited Bell he refused to answer questions, continuing to smoke a cigarette and browse through his outdated flip-phone.

But neighbours said his offending had taken a ‘severe’ toll on his elderly parents who had been forced to spend their retirement looking after him.

‘It’s been very hard for them. They’re both retired but are unable to travel because he is their responsibility,’ the neighbour said.

‘Since he’s returned their health has both deteriorated. It’s been severe and is hard to watch for those of us who know them.’

Bell is due to reappear in Picton Local Court on March 26.

1. Not to have contact with children under 18 unless under supervision from the child’s parents

2. Must not enter shopping centres before 9am or after 3pm on weekdays or at any time on weekends or school/public holidays

3. Not to use any public toilets (including fast food restaurants, sports grounds and shopping centres)

4. Not to enter playgrounds or public areas (includes beaches) where children may be. Must also not loiter near libraries, schools or child care centres.

6. Not to have an access to an internet capable phone

8. Not to possess iPad, computer or other electronic device capable of taking photos or recording

9. Not to store photos or videos of children under 18

10. Only access internet from a single computer inside his residence

11. Not to access internet on that computer except to seek employment or to communicate with government authorities

13. Not to have contact with any person on the child protection register

14. Must not permit any person to enter or stay overnight at his parents’ home

15. Must not leave NSW without approval of Corrective Services NSW

17. He must make himself available for employment, but can not start any job without approval from his supervising officer

18. Must not take alcohol or use drugs without a prescription

19. He must not change his name from Dean Angus Bell without approval from his supervising officer

20. Must attend all psychiatric, therapy and medical appointments he is told to