A police raid on a bikie’s home has uncovered a rare wristwatch worth $1million and a Ferrari F12 coupe – both of which police are now trying to seize.

Comanchero Bradley Colin Peters, 38, was arrested in June last year at his Middleton Grange home in Sydney’s south-west as part of a two-day series of raids by NSW police detectives targeting figures allegedly linked to the city’s underworld.

Peters, who is now behind bars, is charged with 25 offences including possessing unauthorised firearms and ammunition, supplying a large quantity of drugs, directing activities of a criminal group and dealing in the proceeds of crime.

The NSW Crime Commission is now trying to take possession of the supercar and the Swiss-made Audemars Piguet Royal Oak Concept GMT.

The raid on his home was part of Operation Ironside – a global police operation set up by the Australian Federal Police, the FBI, Europol, Canadian Mounted Police and other law enforcement agencies in 2018.

The agencies used a fake encrypted messaging app called ANOM to spy on alleged organised crime figures and have so far arrested dozens of people.

In previous Ironside raids multiple expensive watches were also uncovered including a diamond-encrusted Rolex worth $450,000 and several other Rolex watches.

A police source said bikies’ love of flashy watches and expensive jewellery often has little to do with their fondness for fashion.

‘You can’t put $1million in your bank account but you can fly out of the country wearing it on your wrist and then sell it overseas,’ the insider told the The Daily Telegraph.

The 2019 Ferrari F12 coupe found at Peters’ property was last registered in the name of a company called Sean Phan and Co Investments, according to court documents. 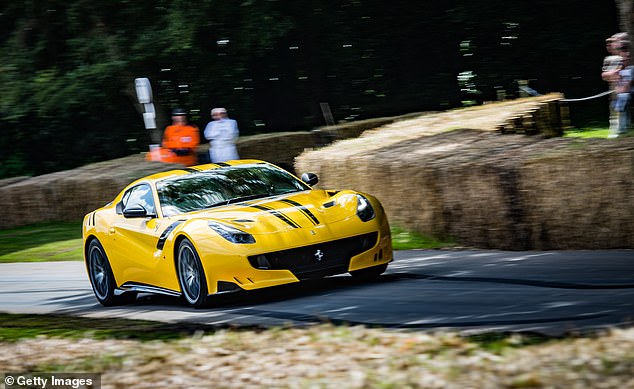 Daily Mail Australia is not suggesting Sean Phan and Co Investments is involved in criminal activity.

The charges that have been laid against the bikie are scheduled for a committal hearing at the Downing Centre Local Court on December 14.