The unseen ending to a shocking street brawl between two topless men in rush hour can now be revealed, after a video showing the final stages of the fight was released.

But the video that was initially circulated on social media ended as the two rival men appeared ready to take the fight to the footpath.

Now, the full version has been released – and it doesn’t show too kindly for one of the combatants.

The truth about what happened when two men ripped off their shirts and slugged it out in the middle of a Sydney street (pictured) has been revealed, after the full version of the viral video was released

In the final moments of the initial video, the younger of the two topless men pointed towards the footpath claiming the two men should continue the brawl over there.

Keen to go on with the punch-up, the older of the men agrees and walks off the road.

But as he does so, the younger man hops back into a Holden Commodore parked in a spot nearby.

Realising his opponent is about to leave, the older man yells at him to get out and continue the fight as promised.

Despite the verbal abuse the younger of the pair drives away – accompanied by a friend in the passenger seat – seemingly having taken one too many heavy hits.

Moments earlier, having been hit with a number of blows to the head, the young man ripped off his singlet in a show of defiance.

Commenters were left bemused by his decision to then, just minutes later, abandon the fight. After close to a minute of fierce fighting, the younger of the men (right) pointed towards the footpath seemingly wanting to continue the brawl there 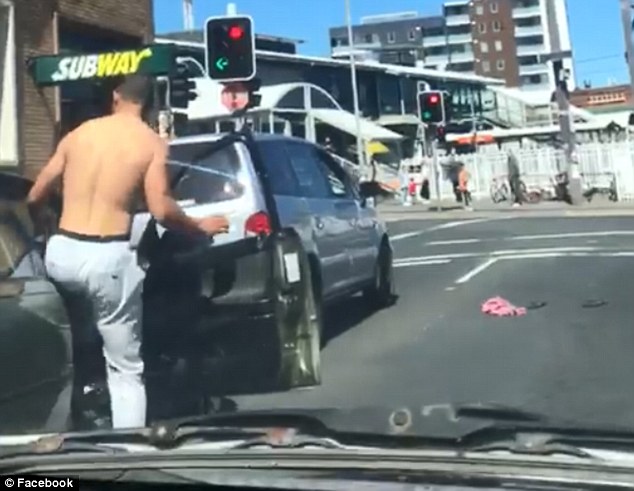 But then just moments later he hops into a Holden Commodore and drives off, copping verbal abuse from his older counterpart

‘Man I’m just laughing… when the other guy said come where the foot path is and he gets in his car!’ one commenter wrote.

‘Old guy carved him up so he said “Let’s go fight on the footpath” (to) give him a window to run away,’ another commented.

‘Old bloke looked like he’s had a couple dust ups. Young fella couldn’t hurt him and did the Harrold Holt!’ wrote one viewer.

New South Wales Police said in a statement that no formal complaint had been made about the incident.