Shocking moment girl, 15, is thrown into the air when she is hit by a car at a busy intersection before horrified witnesses rush to her aid

A young school girl is lucky to be alive after she was thrown into the air when she was struck by a car at a busy intersection.

The 15-year-old girl was crossing Victoria Road in Gladesville, Sydney, on Tuesday when she was hit by the car during peak-hour traffic.

CCTV Footage shows the teenager and her friend dodge oncoming traffic as they attempt to dash across the busy intersection.

A 15-year-old girl was thrown into the air after being hit by a car at a busy intersection at Victoria Rd, Gladesville (pictured)

Her friend stops at the median strip but the 15-year-old continues on before she is struck by an incoming vehicle.

The girl is flung into the air and lands in the middle of the road as horrified witnesses rush to her aid.

A nearby business owner, Tony Vecchia, told Seven News he felt ‘sick’ after witnessing the accident.

‘When I saw her legs were moving, I was so relieved.’ 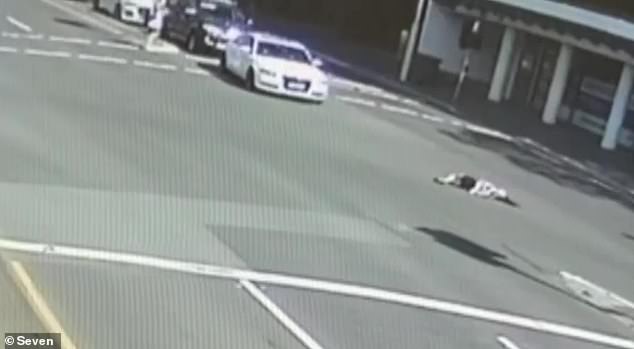 The school girl suffered serious injuries to her head, arms and legs on Tuesday before she was rushed to the Children’s Hospital at Westmead

A doctor who happened to be working just 40m from the accident also offered assistance to the injured school girl.

‘There was a really obvious head injury and she was unconscious,’ Dr Eric Chan said.

The 15-year-old was stabilised at the scene where paramedics said the girl appeared frightened as she called out for help from staff and her mother.

She was taken to Westmead Children’s Hospital with serious injuries to her head, arms and legs where she remains in a stable condition.