Enraged grown men confront group of eshays for playing loud music on a Sydney train – but is their reaction justified or over the top?

Two men have confronted a group of teenagers on a Sydney train, threatening to shove the schookids’ phones ‘up their a***’ after they ignored multiple requests to stop blasting their music.

Footage posed online shows a man storming over to the group of students sitting in the corner of a carriage near Redfern, playing a loud rap song on a phone.

‘Huh, what did you say to me?’ the man asks as he approaches the boys, before ordering: ‘Turn the music down c***.’

When the boy with the phone ignores the demand, the man tries to snatch it out of his hand.

‘Can you not touch it?’ the boy replies.

The man starts screaming ‘turn it down’ and pointing his hand in the boys’ faces, before he is joined by another man who also starts shouting at the teens.

‘You’re not in the playground anymore,’ the second man scolds.

The second man reminds the teenagers that he had previously warned them they were fed-up with their antics.

‘I f***ing warned you, ok? You’re not in the school ground anymore, you are on a train with adults. Now learn your lesson,’ he says.

‘I’m turning it off,’ the boy mutters.

As the men walk away, the second man reiterates they had asked them to turn their tunes down several times.

‘Do you understand? We warned you nicely. Now you should get the message,’ he says.

‘It is getting too much. Thank you.’

The teenagers can be heard snickering after the men returned to their seats.

The video was posted to TikTok on Thursday but has since been deleted. 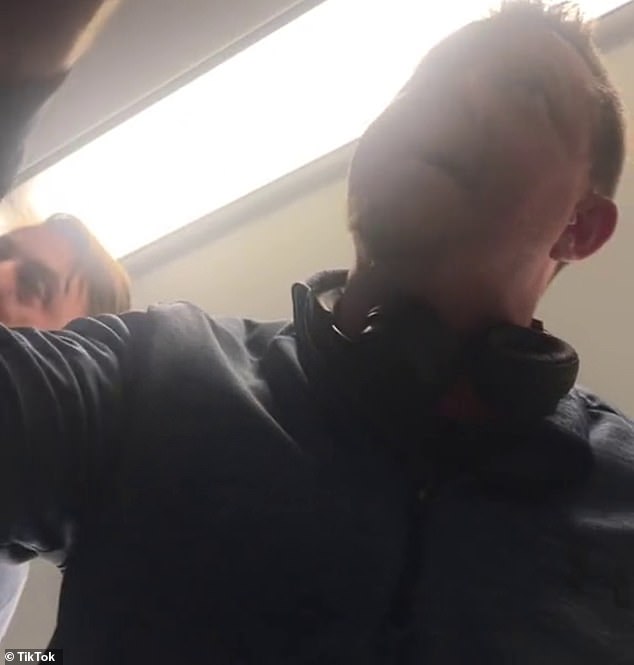 The first man (right) threatens to ‘jam the phone’ up a boy’s ‘a**’ if he does not turn down the music, while his companion (left) reminds the group they had previously been warned to stop their antics