Sydney: Truck driver who allegedly CRUSHED a man against his own car in video was a learner driver

A truck driver who allegedly crushed a man into the side of his car was driving on a learner’s permit without a supervisor at the time.

The 23-year-old man allegedly squashed Ford driver Bader Lebde, 30, into his car after an argument in Greenacre in Sydney’s southwest at 5.30pm on Monday.

He allegedly fled the scene and was arrested at his Greenacre home at midnight on Wednesday, where he was found to be on a learner licence, police said.

Bader Lebde (pictured centre), 30, was allegedly squashed into his car by a truck driver in Greenacre in Sydney’s south-west on Monday afternoon

The young man faces six charges, including drive recklessly or furiously, negligent driving, learner not accompanied by a driver, failure to stop and assist after a crash that caused injury, and not give details to an injured person.

His licence was suspended and he was granted conditional bail to appear at Bankstown Local Court on Wednesday.

Monday’s argument began when the truck driver allegedly failed to indicate at a roundabout on Noble Avenue in Greenacre.

The vehicles both stopped when Mr Lebde got out of his black Ford Territory SUV and approached the Hino Pantech truck, where the 23-year-old man was sitting.

The men had an argument before Mr Lebde allegedly hit the windscreen and damaged a mirror of the truck. 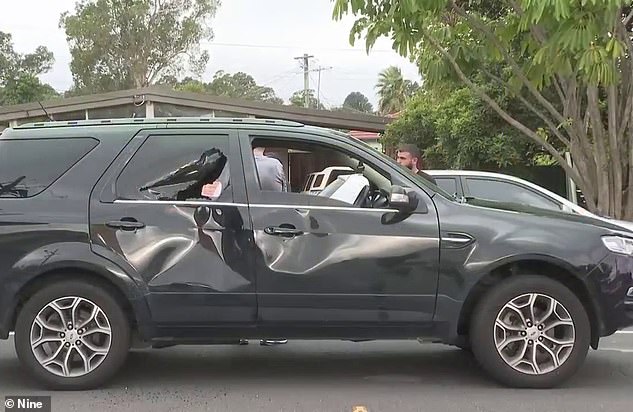 Mr Lebde’s black Ford Territory SUV was left with large dents along the side. The driver himself sustained a a fractured rib and other soft tissue damage

The truck driver then drove away and allegedly side swiped the Ford and struck Mr Lebde, who suffered a fractured rib and other soft tissue damage.

Dashcam footage from Amanda Lum shows the truck allegedly running into Mr Lebde, who was standing next to his parked car on the suburban street.

Mr Lebde stumbled while gripping onto his car as the truck driver drove away while his black car was left with large dents along the side.

Mr Lebde was taken to Westmead Hospital with serious injuries after being treated by paramedics at the scene. 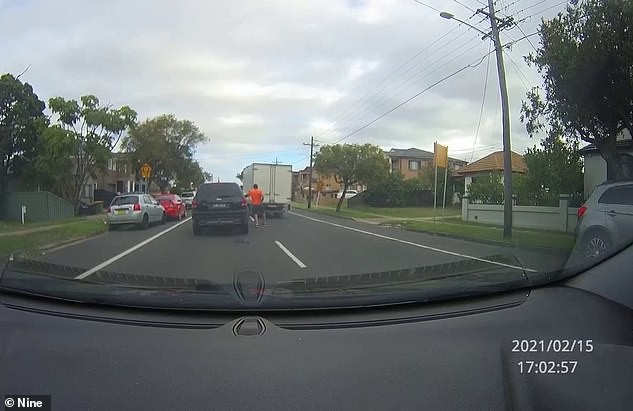 Tony Hurst said he witnessed the incident after hearing an argument from inside his house.

‘He (Mr Lebde) hopped around the side of his car, swearing and carrying on about the truck driver and then he virtually collapsed around the front of the car,’ Mr Hurst said.

‘He was in pain writhing around near the front wheel.’

Police have urged members of the public with information or footage to come forward as they continue their investigation.