A disabled man was awarded $2million by the Syracuse Common Council on Monday after officers used a taser and dragged him off a city bus in 2013.

Brad Hulett, 39, was riding a Centro bus on May 3, 2013, in Syracuse when two officers, Sgt. William Galvin Jr. and Officer William Coleman, ordered him off the bus because he wouldn’t sit down.

Brad had a back injury in 2006, which made it difficult for him to sit down on buses.

In the video, the then 35 year-old repeatedly asked for a reason for his removal but instead of providing a response, Sgt. Galvin used a taser on Brad and proceeded to drag him off the bus with the help of Officer Coleman.

An internal affairs investigation was launched over the incident but it was overseen by Capt. Thomas Galvin – the uncle of Sgt. Galvin who used the taser on Brad, according to Syracuse.com.

Brad’s allegations of excessive force were unfounded by the Syracuse Police Department and Capt. Galvin signed off on the investigator, Sgt. David Brown’s conclusion.

A photo Brad Hulett, 39, from 2013. The disabled man was tased by police on a city bus in May 2013 and was awarded $2million by the Syracuse Common Council on Monday as a result of the incident

Brad suffered a broken hip during the incident and needed to have surgery.

Rick Guy, Brad’s lawyer, argued that the police department Syracuse created an environment where excessive force was rarely punished, according to Syracuse.com.

Michael Lyman, an expert hired by Rick to review the case, also said that it was an ‘obvious conflict of interest that should’ve been addressed immediately by Police Chief Frank Fowler’. 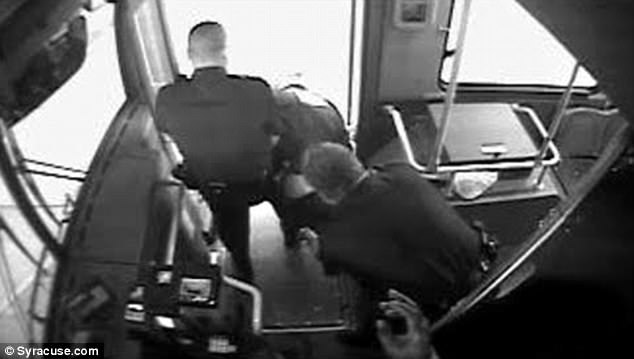 An image from the video taken on the Centro bus in May 2013. In the video, Brad asked why he had to get off the bus bus instead of providing him with an answer, an officer used a taser on him

The case was set to go to trial October 30 but the city law department settled at $2million in September.

Brad’s lawyer initially made a settlement offer of $6.75million.

‘My client was never particularly interested in a monetary settlement as much as he was interested in making sure this doesn’t happen to anybody else,’ Rick told Syracuse. com.

‘That said, it allows him to have several thousands of dollars a month for life to take care of the needs brought upon him by the brutality of the police officers and the covering up of the bad acts of the officers by the police department.’ 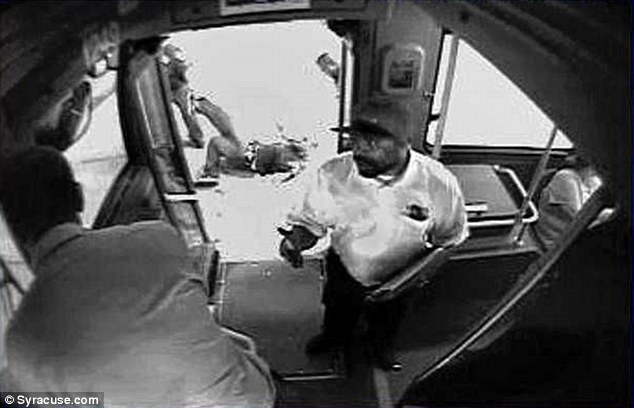 Another still from the video. Brad suffered a broken hip after he was dragged off the bus by police

When Brad was 12, he was hit by two trains in Salina, New York, and doctors had to remove a portion of his brain to save his life.

He was charged with resisting arrest and disorderly conduct because the police report said Brad was told he was under arrest but the charges have been dropped.

But in the video, neither officer told him that he was under arrest.

This is the second multi-million dollar settlement the Syracuse has offered this year to someone injured by a police officer.

Thomas Frechette received $2.25million in May after an officer hit him in 2015 while he was riding his bike.

He suffered 15 broken ribs, a collapsed lung, a concussion and spent three weeks in the hospital recovering. 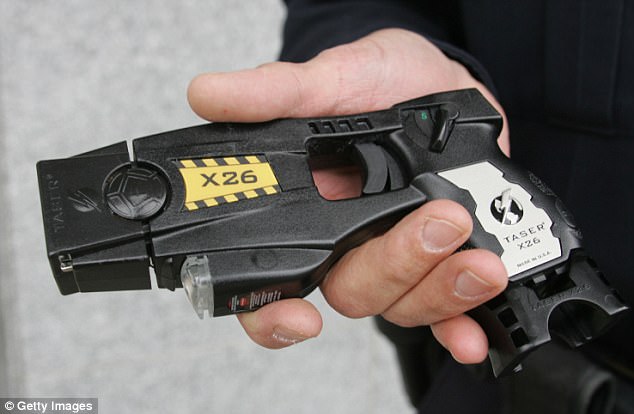 An image of the the latest version of the Taser X26 stun gun. This was not the one used on Brad Hulett