Take the slow train to the heart of Africa

Sipping champagne, I gazed out of the window at South Africa’s wide open farmlands, rugged mountains, arid desert and pink flamingoes. Feeling peckish, I picked up the telephone and dialled my personal butler. ‘Hello Mxolisi. May I have a plate of sandwiches, please?’

Within minutes he arrived, in his livery and pristine white gloves, bearing a platter of smoked salmon triangles, the same delicacy Nelson Mandela had ordered 22 years before me when he travelled on the Blue Train.

‘Would you mind ironing my dress for dinner, please?’ I asked, and off he went, the brass buttons gleaming on his blue and gold uniform. Later, as I popped out of my cabin for a tour of the 1,300ft train – 17 coaches – he returned the dress beautifully steamed.

Stately progress: The Blue Train leaves Cape Town heading to Pretoria, which has now been extended to two nights

It is not often you have a butler nowadays – unless you are a member of the Royal Family or the aristocracy. But the Blue Train takes you back to the golden age of rail, when butlers were as ubiquitous as Louis Vuitton trunks and there was only one way to travel: slowly.

The Queen toured Africa on the ‘Palace on Wheels’ in 1947, with her parents George VI and Queen Elizabeth, and her sister Princess Margaret.

Thousands flocked to railway stations along the route to catch a glimpse of the then Princess Elizabeth as she waved out of the window. There was even a Friesian cow on board to provide fresh milk for the King’s breakfast.

Fifty years later, Mandela took the train from Pretoria to Cape Town with his wife Graca and an entourage of celebrities, including supermodel Naomi Campbell.

Mandela’s butler, Herbert Prinsloo, since retired, told me that people from across the Rainbow Nation lined the streets to wave at the man they called Madiba on his 997-mile journey. ‘He was in suites 25 and 26,’ he recalled. ‘Number 25 was acting as a lounge and 26 the bedroom. Inside 27 was security, with a camera monitor. They had the corridor under surveillance for the 24 hours when Madiba was in the suite. The windows were bullet proof.

‘The railway stations were lined with people all the way to Cape Town, [and we were] followed by helicopters and vehicles along the road. The windows were gold tinted and people could not see inside. They waved at the length of the train as they knew he was somewhere inside.’ 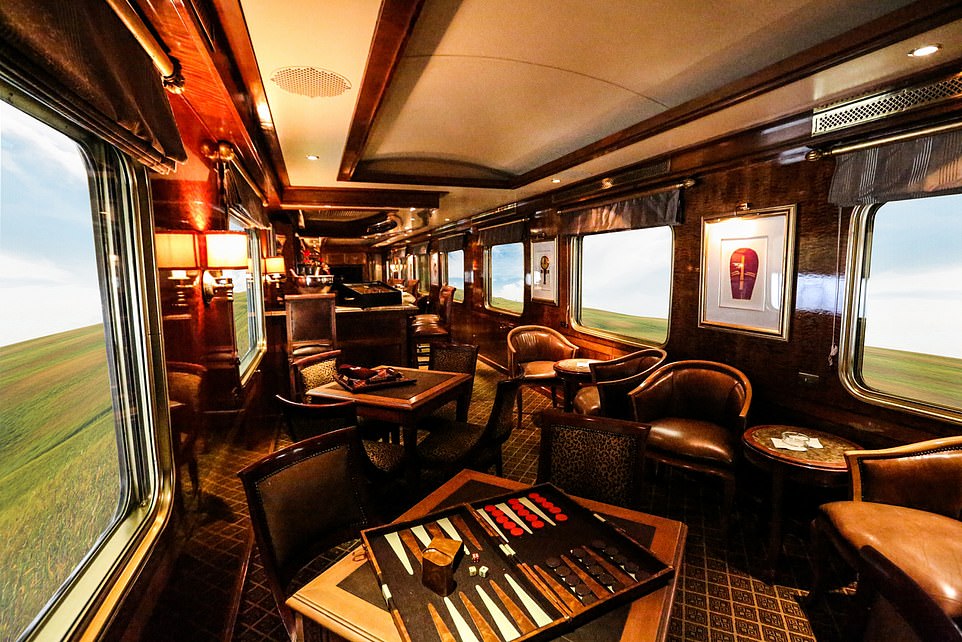 Fit for royalty: Backgammon is set up in the wood-panelled lounge car. There’s also entertainment from a saxophonist

So, I was following in illustrious footsteps by taking a slow train through Africa – and it was slow. The journey from Cape Town to Pretoria has now been extended to two nights, instead of the original overnight journey (the maximum speed is a leisurely 58 miles an hour) so we were on board for a total of 41 hours.

Nonetheless, it was my first trip to the country and the perfect way to see it: neither the Blue Train, which describes itself as ‘a window to the soul of Africa’, nor the rolling landscape disappointed.

I joined the train at Cape Town, and watched Table Mountain disappear in the distance before travelling leisurely through the Cape Winelands and Karoo desert towards Pretoria.

From the moment I checked in at the railway station, I was whisked back to the colonial era, my butler catering to my every whim. My luggage was bustled away to my cabin, while I listened to a saxophonist in the salon and embarked on my first glass of bubbly (a chilled South African Kleine Zalze brut rose sparkling wine, since you ask). ‘You have to clear the bar,’ the manager joked. ‘If you are not drunk by the end of the journey, you will have to catch the train back.’ Equally, my suite, with its two fold-down single beds, was extremely opulent – as you would expect from Africa’s Orient- Express – with its anigre veneer panelling, crisp linen sheets and gold leaf sconces. The en suite shower room was decorated with Gialo Royal Italian marble and gold-plated taps.

I dressed for dinner – the code for ladies is ‘elegant’ while gentlemen are asked to wear a jacket and tie – then headed to the lounge car for cocktails, before moving into the restaurant car.

I chose cauliflower and truffle soup; dry-aged fillet with a veined rock cheese dusted in Biltong; and hot fudge pudding served with caramel sauce and vanilla ice cream. Not good for my waistline.

And with my pudding? Naturally, I chose Mandela’s favourite dessert wine, Vin De Constance, which is made from Muscat de Frontignan grapes. ‘The wine that seduced the crowned heads of Europe, consoled Napoleon in exile and was featured in the novels of Charles Dickens, Jane Austen and Baudelaire,’ the menu read. 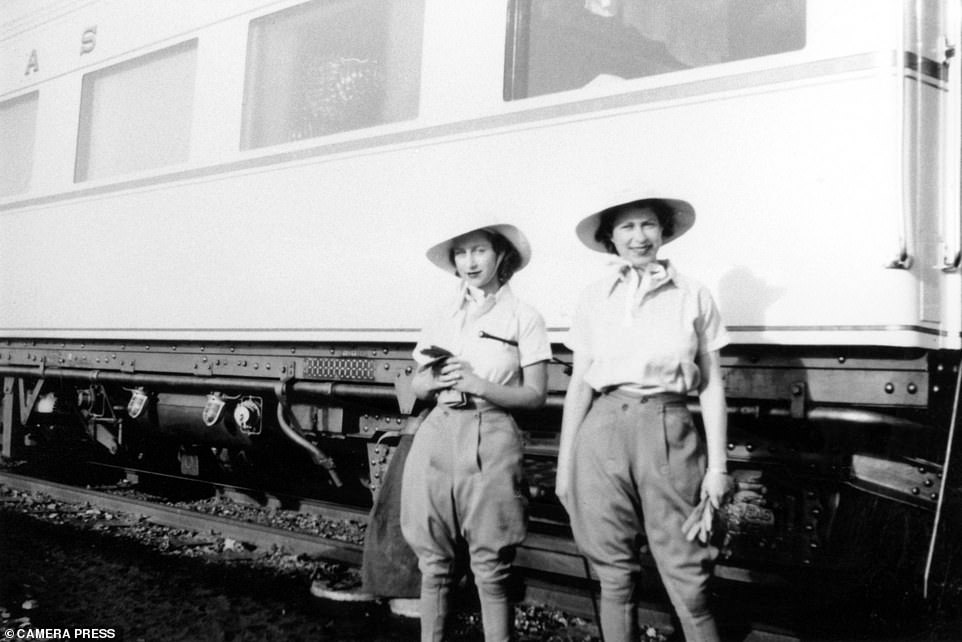 The Queen toured Africa on the ‘Palace on Wheels’ in 1947, with her parents George VI and Queen Elizabeth, and her sister Princess Margaret

Afterwards, saxophonist Ayo Solanke played a medley of tunes, including Pata Pata by Miriam Makeba, and the staff began to congo through the restaurant car. The passengers soon joined in. ‘When I play something and somebody smiles, I get my mojo,’ he told me. ‘Some nights it’s reserved, but you have this more often than not.’

Chatting to my fellow guests in the club car, I discovered that the Blue Train is a popular venue for celebrations: one passenger was celebrating her 80th birthday; another his 65th and a third her 50th.

But it was the tranquillity that attracted retired professionals Michael and Sandie Whitcroft, who have done a number of ‘slow’ journeys over the years, including Rajasthan’s Palace on Wheels and Canada’s Rocky Mountaineer.

‘We love this kind of travel,’ said Michael. ‘It is great to just unpack once and then not to have to worry about it again until you get off.

‘You wake up in the morning and you are in a new place and see the good and the poor sides of a country. Inevitably, railway lines and sometimes rivers often pass through poorer areas of towns, so you get a window into how people less fortunate than oneself live. You also meet some interesting people: the slow pace gives you a chance to chat and we have found others’ experiences provide us with ideas that we might like to try in the future.’ 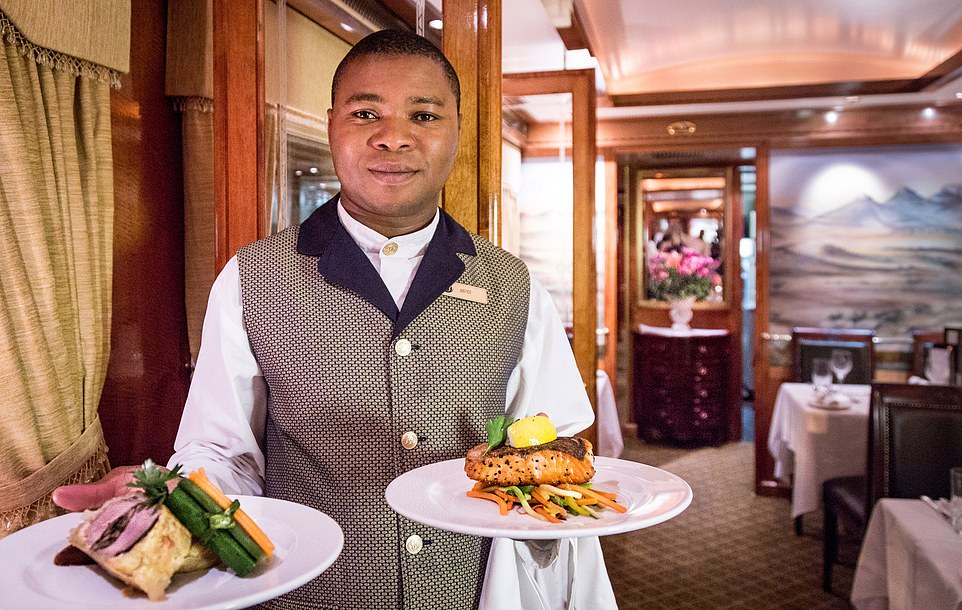 ‘It is not often you have a butler nowadays – unless you are a member of the Royal Family or the aristocracy,’ writes Claudia

Most of my trip was spent wining and dining – the Blue Train is not for the faint-hearted or those on diets (I must have put on at least a pound a day). You could not get much exercise waddling between the observation car at the back of the train and the club car at the front for an after-dinner Cuban cigar and brandy. Although one of the guests suggested a Zumba class.

The breakfast menu was extensive: honey and apple muesli; layered berry compote; a savoury omelette; eggs benedict; a full English complete with minute steak – but I saw no sign of a dairy herd (obviously that only happens for royalty). Not to mention a three-course lunch and traditional high tea.

After lunch we pulled into Kimberley, the capital of the Northern Cape Province, which became synonymous with the diamond rush: it is where Cecil John Rhodes made his fortune after founding the De Beers diamond company. Sadly I couldn’t afford a diamond. But I did leave with a souvenir of my voyage: a £30 miniature gold carriage clock with the ubiquitous Blue Train logo.

Carrier (carrier.co.uk) offers a seven-night package from £3,185pp based on two adults sharing, including South Africa Airways flights, (flysaa.com) departing June 20, 2019. The price includes two nights in an apartment at More Quarters, Cape Town; the two-night journey between Cape Town and Pretoria on the Blue Train in a Deluxe Suite (full board), two nights fully inclusive at the Royal Madikwe (royalmadikwe.com) and one-night in a luxury suite at The Saxon Boutique Hotel and Spa in Johannesburg (saxon.co.za).