Fascinating photos of from a theme park in North Korea provide a rare glimpse at what families from the communist state do for fun.

Candid snaps show thrillseekers clinging on to a rickety rollercoaster with a vague look of fear on their faces, while another shot shows children causally armed with bow and arrows at an open-air stand.

Taesongsan Park, which opened in 1977 and is around seven miles from Pyongyang, boasts ten to 15 ride and attractions. Some of the more unusual offerings include archery sessions and tug of war matches.

Ready, set, fire! Taesongsan Park seven miles from Pyongyang boasts around ten to 15 ride and attractions from a archery to a game of tug of war. A British traveller, who wished not to be named, slipped into the communist state to take these extraordinary inside images of a day out 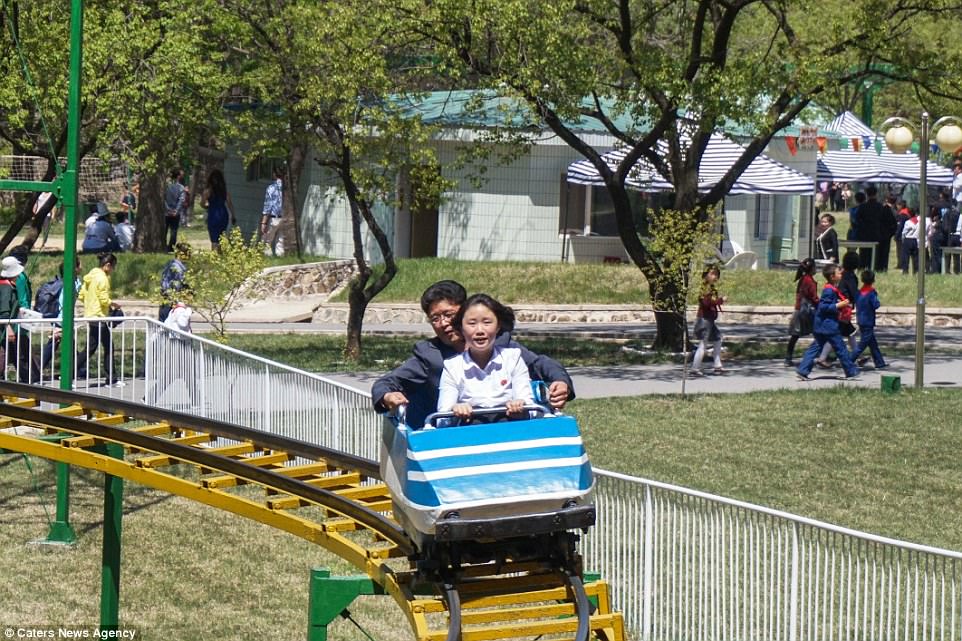 Communist coaster: Apparently, the big rollercoaster at the park resembled ‘something circa 1950’s or before’. The ride featured single carts holding two passengers at a time

A British traveller, who wished not to be named, slipped into the communist state to take these extraordinary inside images of a day out.

He said: ‘When compared to Alton Towers in terms of thrills, I would have to give the medal of the best to Mt Taesong! Albeit it’s a different kind of thrill ride you’re on there.

‘You know, more the thrill of someone arresting you for unknown reasons and having no way of communicating your situation to the outside world!’

Pictures of Taesongsan Park which opened at the foot of Mount Taesong in the late 1970s show traditional bumper cars in action and a ferris wheel turning.

There also appears to be a theatrical dancing demonstration in full swing, while archery lessons take place in another corner.

The photographer, who was allowed to walk about North Korea’s answer to Alton Towers, could not help but suspect many other visitors were there just to liven the place up. 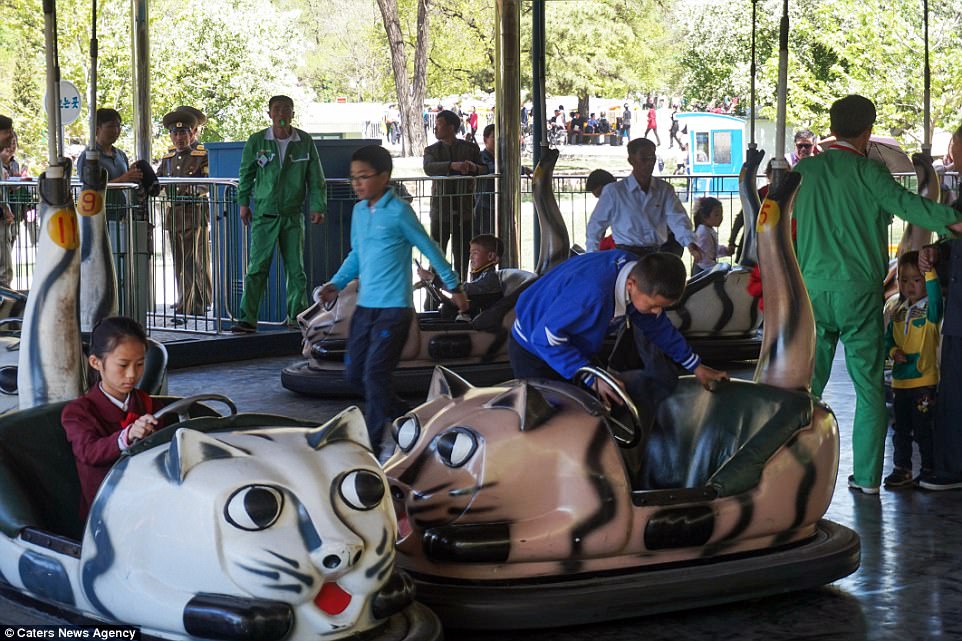 Road rage: Young children ride on the dodgems, with cars shaped like giant cats. Park guards appear to be waiting in the background, making sure everything is in check 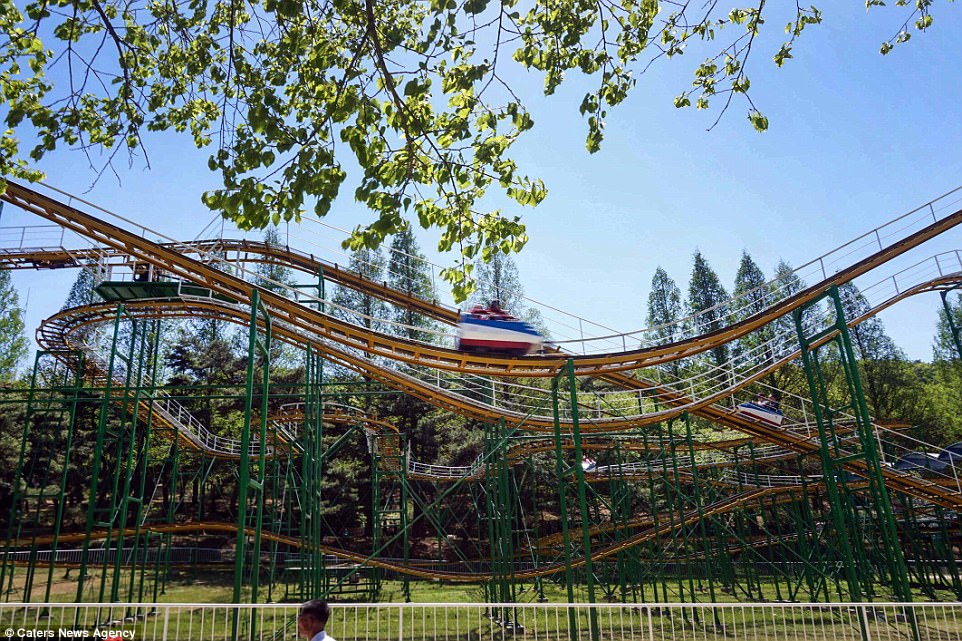 Staying on the right track: Guards were on watch to make sure the traveller and his tour group didn’t go astray

More than a million people, including foreigners, enjoy themselves in the fun fair every year. Every year May Day festivities are held in the popular park.

The photographer added: ‘I would estimate there were between ten to 15 rides and attractions in the park.

Despite being quite genuinely afraid that a stray arrow might find its way toward my person, I sheepishly requested a bow and tried my hand

‘It’s hard to say exactly as we were forbidden from going to the areas closest to the exits through fear we would escape the confines of the park and roam rampantly through the streets of Pyongyang.

‘It was the only place we were allowed to wander around somewhat freely however. Our guides let us mingle with the locals in the approved areas and just stood guard along the pathways leading to the entry and exit points.’

The tourist said his two highlights of the Mt Taesong amusement park were participating in the archery and tug of war.

He explained: ‘The archery equipment was pretty run down and there were zero health and safety regulations in place as children grabbed weapons and fired freely at targets around 10 metres away. 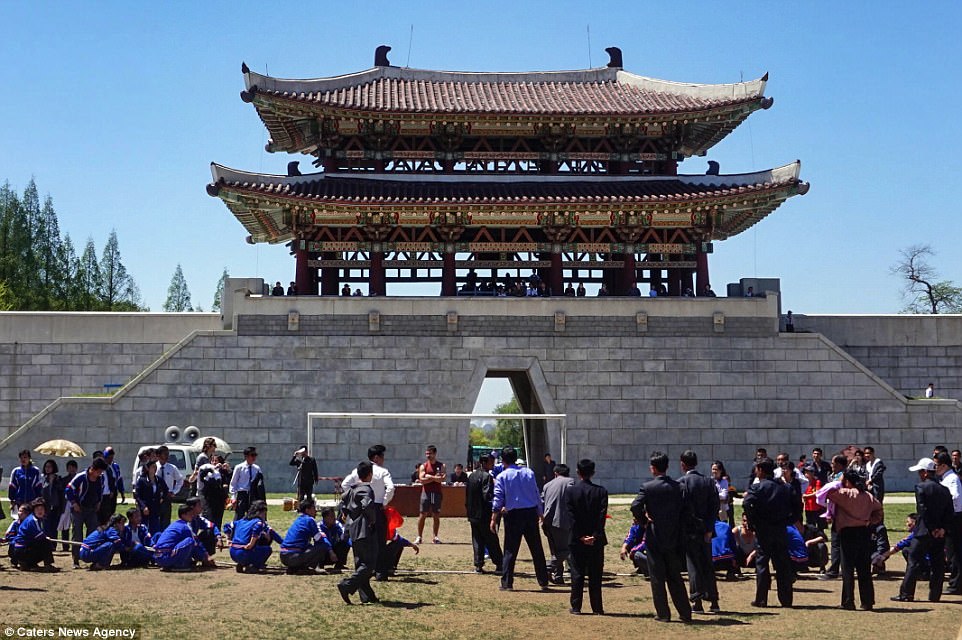 Heave-ho: Two teams take part in a tug of war in front of a panel of judges at the Taesongsan Park 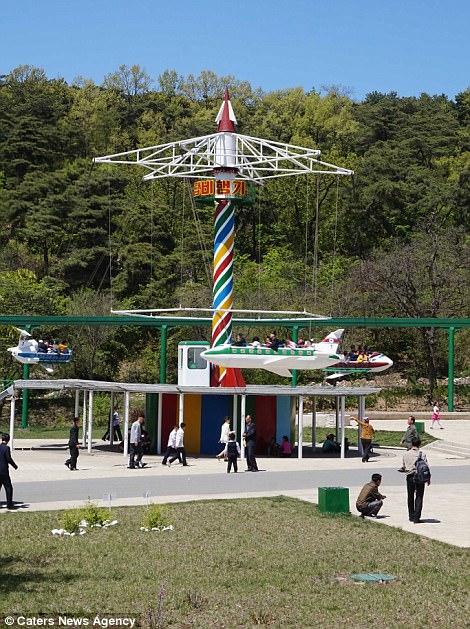 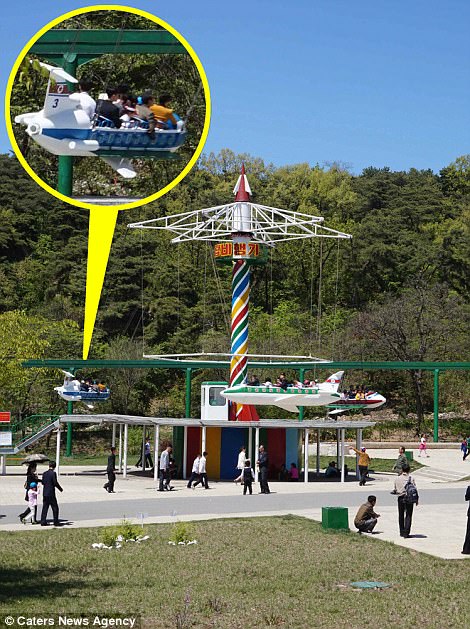 Flight mode: Children take to the skies on a carousel ride. The carriages features Air Koryo branding, the airline is the state-owned national flag carrier of North Korea 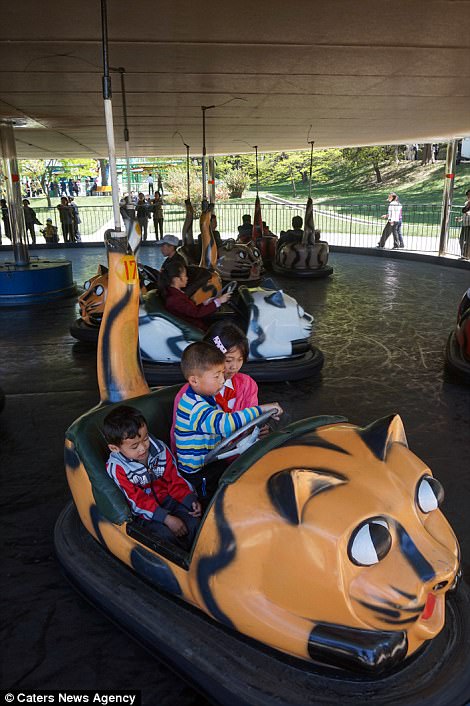 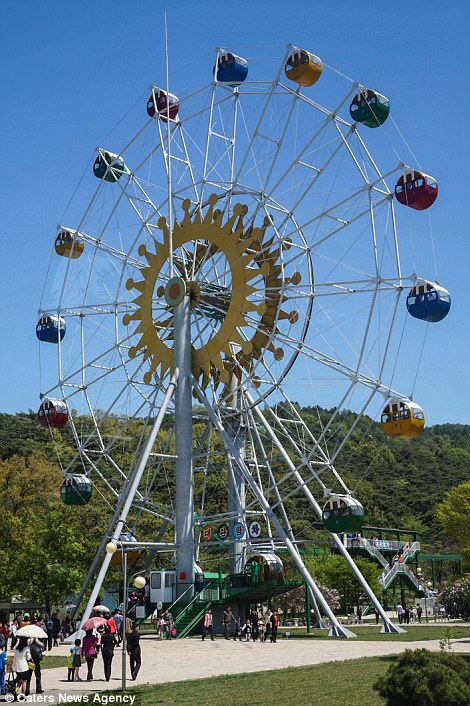 Going for a spin: Children get to grips with their dodgem car (left) while a large ferris wheel lures park-goers in 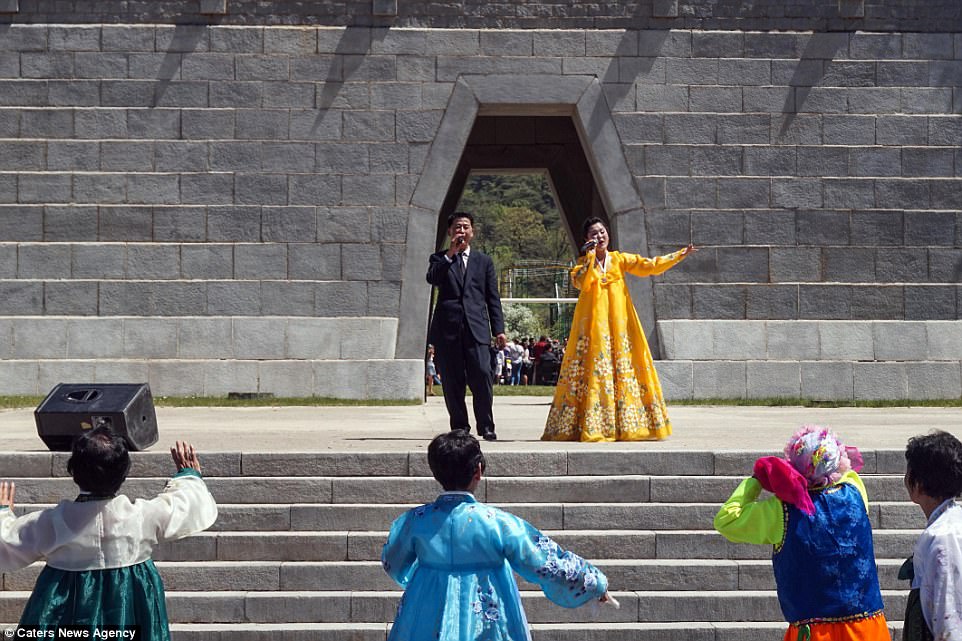 Making an entrance: Singers and dancers entertain crowds at the park, decked out in colourful pieces of costume

‘Despite being quite genuinely afraid that a stray arrow might find its way toward my person, I sheepishly requested a bow and tried my hand.

‘My failed attempts were met with laughter from the local lads who soon showed me how it was done.

‘Upon observing a very serious tug of war session, complete with a panel of judges a’la Simon Cowell, I was quite literally grabbed by the scruff of the neck by a woman in her 50’s and thrown into the fray.

‘I was momentarily terrified, but I soon came around to the military style pep talk that was shouted at me and my team before we picked up the rope and battle cried our way to victory.

‘High fives all round, including from my 50 something would-be captor. Very surreal!’

Apparently, the big rollercoaster at the park resembled ‘something circa 1950’s or before’. The ride featured single carts holding two passengers at a time, with steel girders painted bright green and yellow.

The tourist estimated that there around 500 people when he visited.

He believed that admittance to the park was free of charge, explaining: ‘When traveling in the Democratic People’s Republic of Korea (DPRK) the guides make sure to tell you repeatedly how well the government treats their citizens.

‘Everything is government owned, there aren’t any private businesses, and this is, apparently, a very good thing, I mean some of the perks do sound pretty hard to argue with. 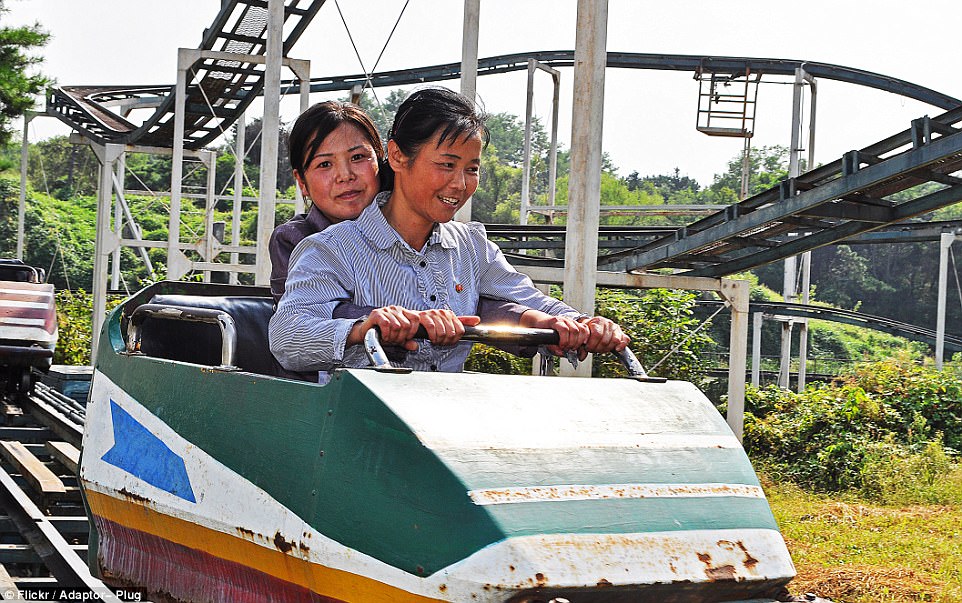 Following the theme: The Mangyongdae funfair is another amusement park, also based close to the capital Pyongyang 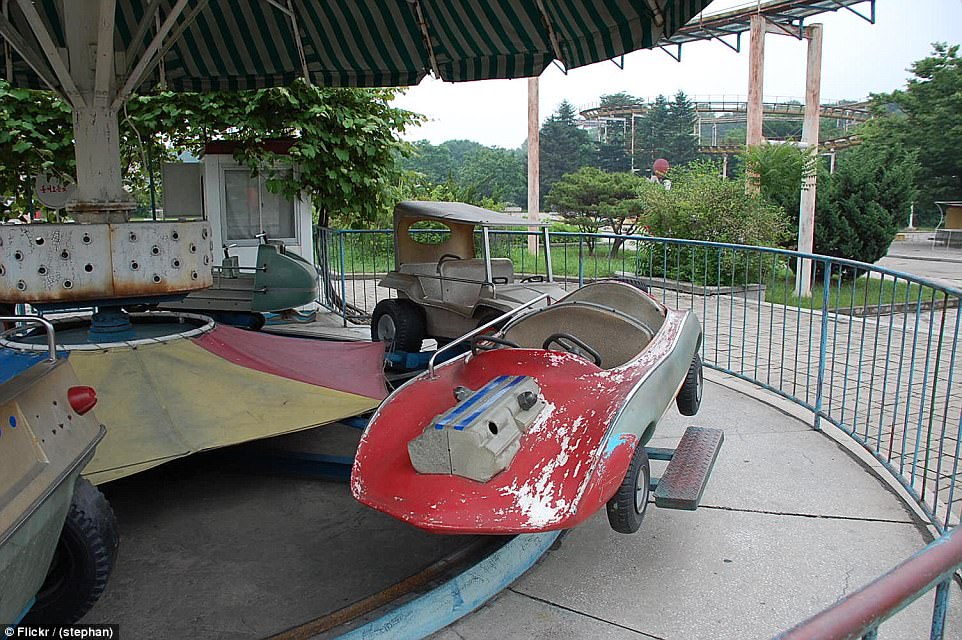 In need of a revamp: These rusting rides don’t provide visitors with much confidence 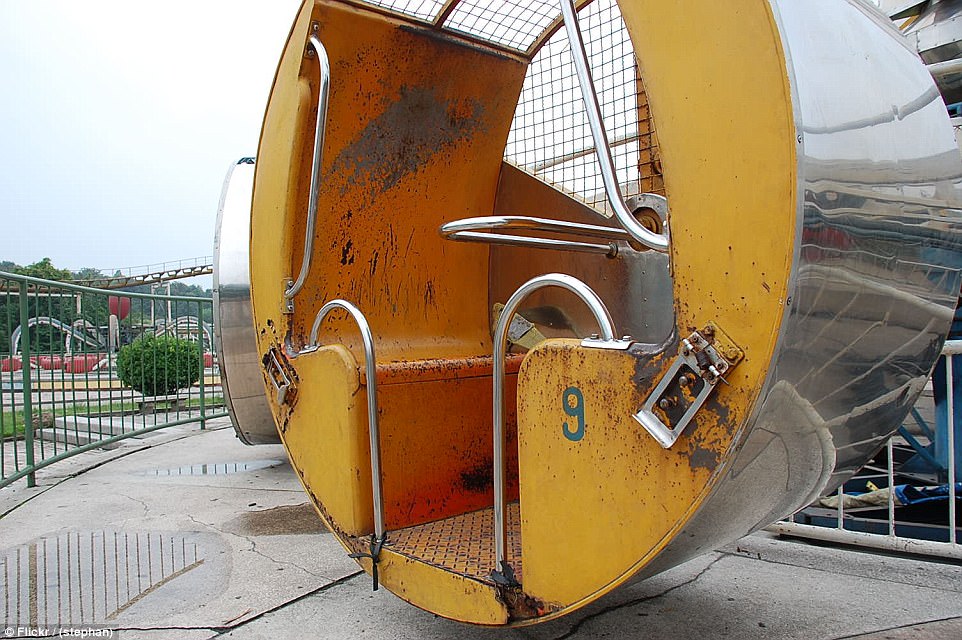 Seen better days: A carriage on a ride looks in sorry state with rust marks coating its metal exterior

‘Free accommodation, free entrance to attractions like these, even free beer! Although that’s reserved for males, five litres per month though, not too shabby!

‘When you put all of that against the UK’s £40 entry to a theme park, £5 a pint and sky high rent price – on paper- North Korea starts to sound like a pretty decent place to live!’

Summing up his theme park excursion, the bemused tourist said: ‘It was busy and there was a party atmosphere with large groups enjoying picnics, barbecues and all manner of fun and games.

‘That said there was a slightly odd undercurrent to the mood, but that’s only to be expected in North Korea!

‘One thing I did notice though is that when we were due to depart the park at 12.30pm, it seemed that almost everyone else in the park had the same idea and people were leaving in droves.

‘Call me paranoid but it’s hard not to suspect that perhaps some people may not have been there of their own accord exactly. 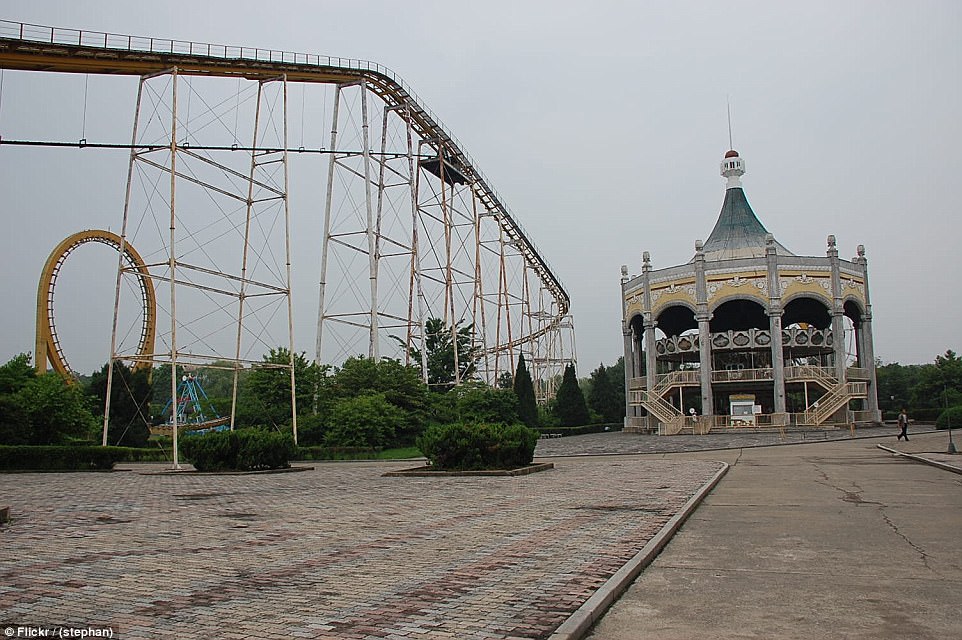 At least there are no queues! Photos taken inside the Mangyongdae funfair show it looking eerily empty 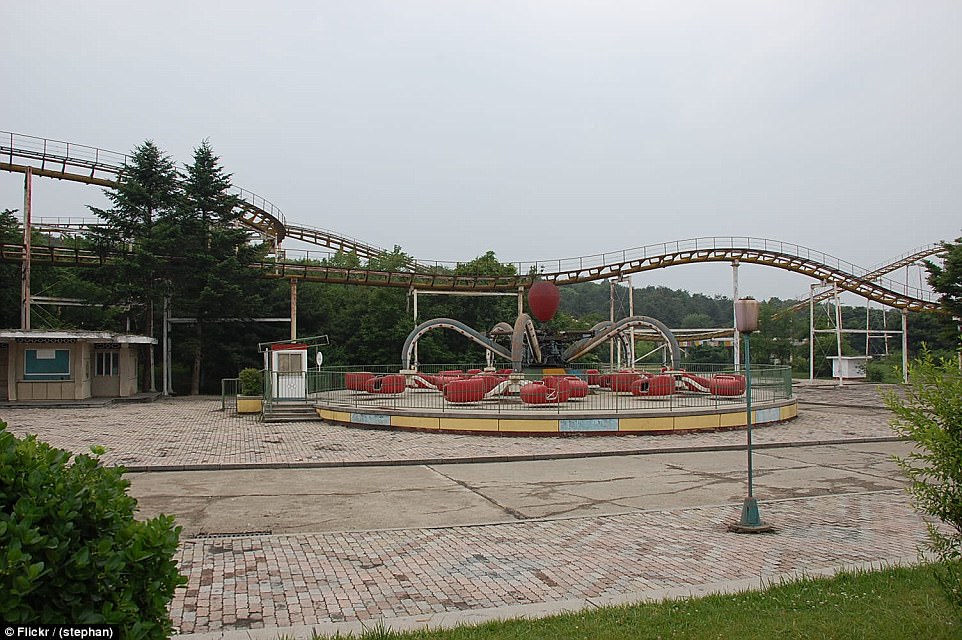 Come one, come all! Like Taesongsan Park, there are a mixture of rides to suit various age groups 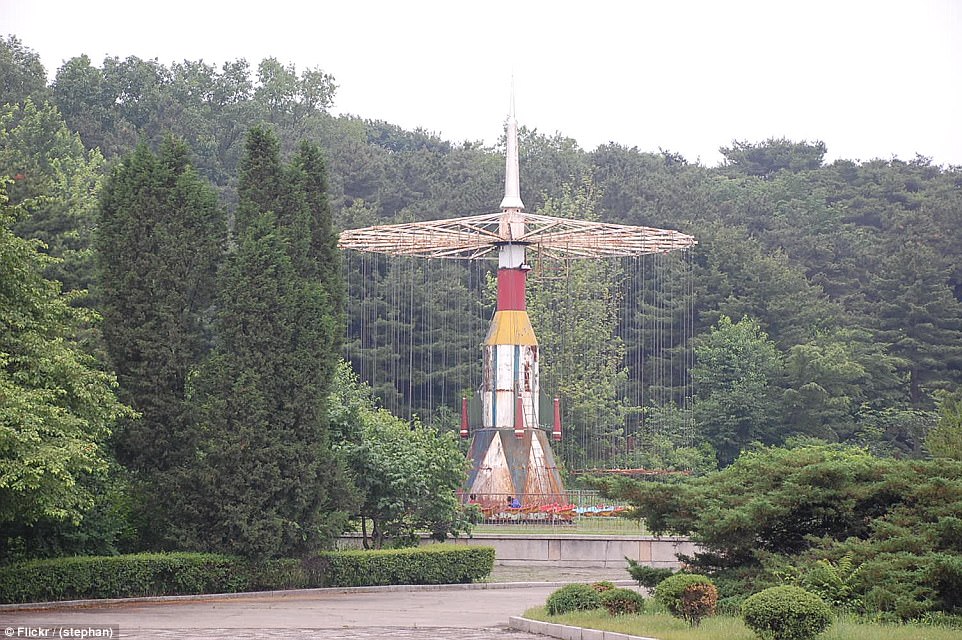 ‘But who knows, maybe that is just the hour that North Koreans feel is time to head home!

‘I think it’s important that people understand that the local people aren’t all total oddballs. It becomes quite apparent they are just normal people living in very abnormal circumstances.

‘They don’t have access to the internet and as a result are incredibly behind the times – everything from haircuts to architecture seems to be from a bygone era.

‘I have to say though that one positive by-product that was very apparent is that people weren’t in any way glued to their phones and social media accounts.

‘In a day and age where we are all guilty of occasionally checking our news feeds instead of making conversation with loved ones that we are actually with, it was very refreshing to have a glimpse into a world where that isn’t a factor at all.’