TALK OF THE TOWN: Holliday Grainger’s baby job puts her TV hit on hold as fans of The Capture will have to wait for a second series

Fans of the BBC’s runaway hit drama The Capture are going to have to wait even longer for the much-anticipated second series. For I am told that its star Holliday Grainger is expecting a baby.

The actress, 32, has tried to keep the news hush-hush, but industry insiders are asking if this is the primary reason why production on the crime series is now on ice.

It will be the first child for Holliday and her actor boyfriend, The Crown star Harry Treadaway, 35. They have been dating since 2015.

Harry Treadaway, from The Crown, left, and Holliday Grainger, right, from The Capture, right, have been dating since 2015 and are expecting a child 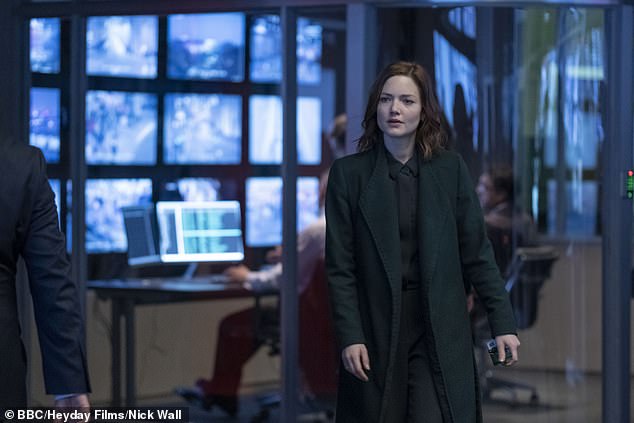 The Capture, in which Holliday played the lead character, Detective Inspector Rachel Carey, won critical acclaim and an audience of more than seven million

The Capture, in which Holliday played the lead character, Detective Inspector Rachel Carey, won critical acclaim and an audience of more than seven million. It was also the biggest new title of 2019 on iPlayer, with the six episodes watched a total of 22 million times.

In June it was announced that the thriller had been commissioned for a second series, with Holliday signed up to return. My mole tells me: ‘Large-scale productions are beginning to resume now that lockdown is easing, and the BBC has been keen to get going on its biggest hit drama. But plans to get the cameras rolling are in limbo because of Holliday’s pregnancy. It’s obviously great news for her, but it is causing something of a production headache.’ Another on-set mole told me that no production dates had been confirmed yet but that it was hoped filming would begin next year.

Her star continues to soar. Thankfully, she was able to finish shooting the fourth series of Strike, which has just started airing on BBC1, before her pregnancy.

Meanwhile, a friend of Harry tells me the actor had also cleared his schedule and has parted ways with his publicist, adding: ‘He’s told pals he is planning to go on a hiatus.’

Last night a spokesman for Holliday said: ‘We do not comment on a client’s personal health.’