TALK OF THE TOWN: Is Eugenie set to swap a Palace for a penthouse

It is barely six months since Princess Eugenie moved into Kensington Palace’s freshly renovated Ivy Cottage. But is the newlywed Princess already planning another move with her husband Jack Brooksbank?

The Queen’s granddaughter was spotted making visits to a multi- million-pound property in West London just days before her wedding at St George’s Chapel, Windsor, earlier this month.

The imposing seven-storey house, on an exclusive garden square where homes sell for about £20 million and flats can fetch £4 million, is undergoing major renovation work and is covered in scaffolding. 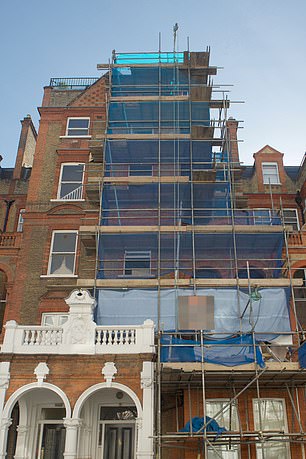 Princess Eugenie, left, was seen entering the west London property which is being refurbished, right, in the days leading up to her wedding earlier this month

Eugenie, 28, has been seen at the property, letting herself in by the main door with her own key, while her chauffeur-driven Range Rover – with personalised number plates – waited outside.

I am told that the top two floors are being ‘completely gutted’ to make one fabulous penthouse.

Eugenie must see the building work as important to have taken time out of her busy pre-wedding schedule to head to the property.

One visit took place on Monday October 8 – just four days before the ceremony and when preparations were in full swing.

One of my spies spotted Eugenie, wearing a smart blue dress, dashing in at about 2pm.

A clear plan has always thought to have been in place for the couple to move out of Kensington Palace.

Sources say that Eugenie and Jack have complained that the three-bedroom Ivy Cottage is rather small if they have a family in the future. A friend said last night: ‘They have always planned to move into their own home. Eugenie has her own wealth from her family and Jack’s family are also wealthy. It was only a matter of time before they sought somewhere a bit larger to live after their wedding was out of the way.’

To add more mystery to the tale, Buckingham Palace said last night that Eugenie had no plans to move.

Ben goes in for a spot of Bear baiting

I hope Bear Grylls wasn’t expecting friend Ben Fogle to come to his rescue after being labelled a ‘t***’ by a reality TV star. Love Island’s Montana Brown hit out at Bear, 44, for staying in a luxury hotel while filming The Island and leaving his celebrity contestants to fend for themselves.

Now Ben, 44, has weighed in to the row, saying: ‘When I do my shows I immerse myself. When there is someone who has been living in the wilderness for years, the only way I can gain their trust is to live with them.

‘The idea that I should have a nice hotel does not really ring true for me. If I go and say I am living with people, that is what I do.’